Over the years, chiral discrimination of chiral molecules such as amino acids, alcohols, amines, hydroxy-carboxylic acids, etc. has aroused the interest of the scientific community. Thus, numerous studies have reported the possibility to discriminate several organic guests by using both symmetric and asymmetric porphyrin derivatives. Nevertheless, this entry exclusively focuses on chiral porphyrinoids as probes for asymmetric recognition and sensing, illustrating the main aspects concerning the chiral recognition phenomena of a multitude of chiral organic guests through several chiral mono- and bis-porphyrins via different spectroscopic techniques.

Two or more molecules, able to non-covalently interact and to display binding-site complementarity, may exhibit molecular recognition [1][2]. In this respect, the chiral recognition is a specific process in which a host molecule selectively binds, through supramolecular forces (e.g., hydrogen bonding, metal coordination, hydrophobic effects, van der Waals forces, π–π and/or electrostatic interactions) to a precise enantiomer of the guest molecule compared with mirror stereoisomer [3][4][5][6][7][8][9][10][11]. Nevertheless, this latter phenomenon represents a key process in a wide range of chemical systems and biological occurrences in the natural world [12][13][14][15][16][17]. In this context, porphyrins, owing to their  i) extensive electron conjugation, ii) fascinating spectral and photophysical properties, along with iii) the facile metal coordination and functionalization at meso/β-positions [18][19][20], can be successfully employed as ideal receptors to recognize a large variety of guests [21][22]. For this reason, porphyrinoids and related derivatives find numerous applications in the literature, ranging from energy transfer phenomena and catalysis to oxygen transport and biological and supramolecular self-assembled systems [23][24][25][26][27][28].

Chiral porphyrins and metalloporphyrins are particularly well suited for molecular recognition and optical resolution since they can be useful for the determination of absolute configuration, enantiomeric resolution, and enantiomeric excess of chiral molecules [29][30][31][32][33][34][35][36]. Furthermore, they can mimic biomolecular recognition in biological and biochemical processes [37]. Monomeric porphyrinoids can exhibit two sorts of chirality: i) extrinsic chirality, which occurs when chiral substituents are covalently bonded to the macrocycle ring [38], and ii) intrinsic chirality, in which achiral substituents are arranged along a chiral axis or on a chiral plane to the porphyrin ring [16][39][40]. In addition, chiral dimeric and multimeric porphyrins can be achieved by means of a chiral bridge between chiral or achiral porphyrin rings [18].

Although several studies have reported the opportunity to discriminate numerous guests by using both symmetric and asymmetric porphyrin derivatives [10][41][42][43][44][45][46], this review exclusively focuses on chiral porphyrinoids as probes for recognition and sensing of chiral organic molecules, with particular regard to amino acids, their ester-derivative amines, alcohols, carboxylic acids, and their derivatives, as well as some chiral aromatic compounds—ruling out, however, the corresponding achiral counterparts.

The major advantage of using chiral porphyrins over achiral ones is because of the formation of host–guest diastereomeric complexes that present different physical and chemical properties and can be easily monitored by conventional spectroscopic methods, such as UV/Vis, fluorescence, 1H NMR, and circular dichroism [47]. Noteworthy, among several chiral molecules, as reported in the literature, special attention is given to amino acid guests. In fact, amino acids are fundamental bioactive molecules broadly employed in several chemical and pharmaceutical fields [48]. Additionally and more remarkable, the chiral discrimination of enantiomers from amino acids constitutes a crucial step in better investigating the origin of “homochirality” in biological systems, as well as in developing interesting chiral devices for technological applications [49][50][51]. For instance, in the agri-food field, D- and L-amino acid profiles can give important information to reveal food adulteration [52][53], food quality, and the nutritional value of foods [54]. Nevertheless, chiral discrimination of other chiral organic guests has been taken into account.

2. Chiral Recognition of Amino Acids and Their Esters

A few years later, in 2004, Imai et al., reported the first study regarding the chiral recognition of amino acids and dipeptides in water at room temperature [59]. They synthesized water-soluble chiral Zn(II)-porphyrin derivative (Figure 2a, VII) with C2 symmetry, prepared as a racemic mixture and resolved by chiral HPLC method. The CD spectra of both enantiomers show specular bisignate couplets in the porphyrin Soret region around 425 nm and 442 nm (Figure 2b). The two Zinc(II)-porphyrin VII enantiomers showed chiral selectivity for L-enantiomers of amino acids and dipeptides by UV/Vis titration method in an aqueous solution. According to Kuroda’s observations, the chiral recognition mechanism suggested by the authors consists of three types of interaction: coulombic, coordination, and steric repulsion, as illustrated in Figure 2c. 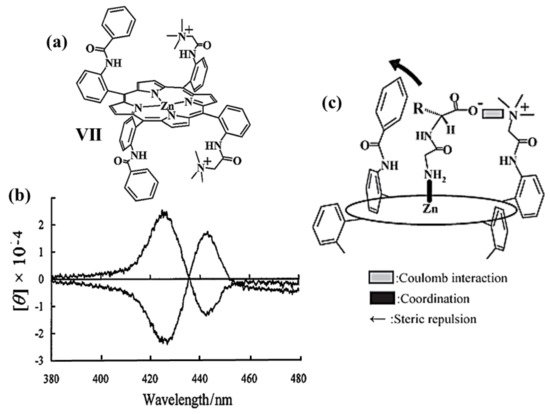 The incorporation of a chiral porphyrin (Figure 3a, VIII) into the mesoporous molecular sieves SBA-15 for chiral recognition of small amino acids was investigated in 2006 by Wang et al. [60]. The resultant material was analyzed by circular dichroism spectroscopy, demonstrating CD signals very different compared with those of the chiral porphyrin alone in solution (Figure 3b). The authors explained such difference in terms of intermolecular interaction of chiral porphyrin VIII with the OH- groups in the channel of SBA-15. Moreover, they demonstrated by UV/Vis and CD spectroscopy that the composite material (SBA-15/porphyrin) has a higher affinity for D-alanine than the L-enantiomer through the mixing in the water of the composite mesoporous materials with the related chiral amino acids at room temperature. Noteworthy, in comparison with L-alanine, the D-enantiomer is more tightly absorbed into the channel and onto the surface of the mesoporous material. This research provides a feasible model to overcome the tedious preparation in organic solvents, along with the weak solubility of some amino acids in an organic environment, facilitating the host–guest separation as well. 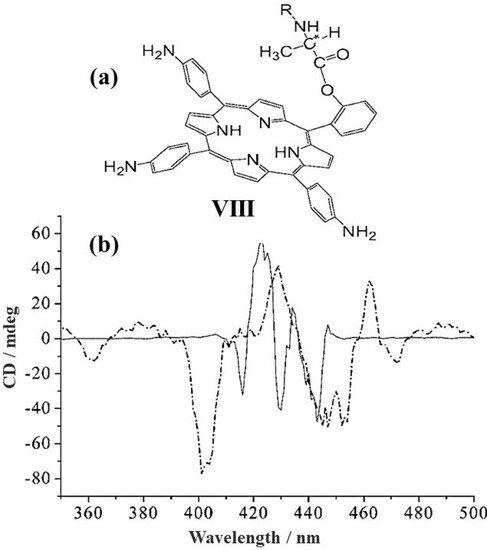 The first work on chiral recognition based on bis-porphyrin systems dates back to 1995, reported by Crossley et al. [61]. They prepared Troger’s base analogue chiral porphyrin dimer (Figure 4a, X) for chiral recognition of methyl and benzyl esters of histidine and lysine amino acids [62]. The bis-porphyrin was prepared as a racemic mixture and resolved by the chiral HPLC technique. The resolved enantiomer pairs have a C2 symmetry, and they display specular CD spectra with a bisignate couplet in the Soret band region (Figure 4b). NMR spectroscopy was used to investigate the affinity of the bis-porphyrin towards chiral amino acid derivates: high affinity was shown for the histidine methyl and benzyl esters (calculated enantiomeric excess up to 80–86%) and for lysine benzyl ester (calculated enantiomeric excess up to 48%) in deuterated chloroform (Figure 4c). 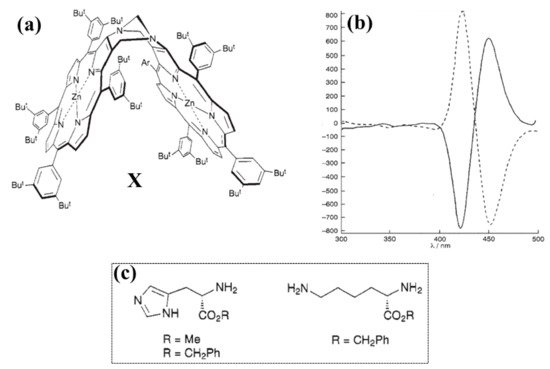 Figure 4. (a) Structure of the chiral bisporphyrin X; (b) CD spectra of the enantiomers of Zn(II) bis-porphyrin X in chloroform; (c) Structures of histidine methyl and benzyl esters (on the left) and lysine benzyl ester (on the right). Adapted with permission from reference [62]; published by Royal Society of Chemistry 1995.

A chiral Zn(II)-porphyrin derivate (Figure 5a, XIV) having N-phenylamide group was reported by Starnes and co-workers in 2012 [63]. Such system was investigated for chiral selectivity towards several anionic guests by using UV/Vis spectrophotometric titration in dichloromethane. In detail, for both enantiomers of N-acetylalanine, N-acetylphenylalanine, and N-acetyltryptophan, chiral zinc-porphyrin exhibits a moderate selectivity. On the other hand, a better selectivity was observed to discriminate (S)- and (R)-mandelate isomers, evidencing a binding ratio (S)-/(R)- isomers around 2. The 1H NMR technique was performed to investigate the mechanism of complexation between chiral porphyrin XIV and mandelate isomers. 1H NMR data suggest the well-known three-point interaction between chiral porphyrin and (S)-mandelate (Figure 5b), whereas for (R)-mandelate a less favorable complex is formed because of steric repulsion between the porphyrin ring and the phenyl group of mandelate (Figure 5b). 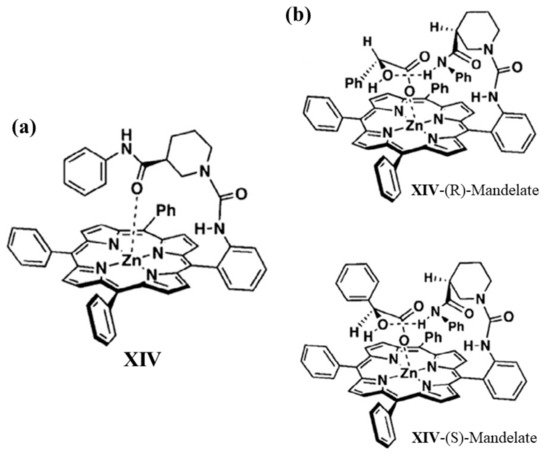 In 2005, a chiral bis-porphyrin (Figure 6a, XVI) with a C2 symmetry was reported by Ema et al. [64]. The bis-porphyrin XVI was explored as a receptor and chiral 1H NMR shift agent for chiral diamines, aziridine, and isooxazoline in chloroform (Figure 6b). 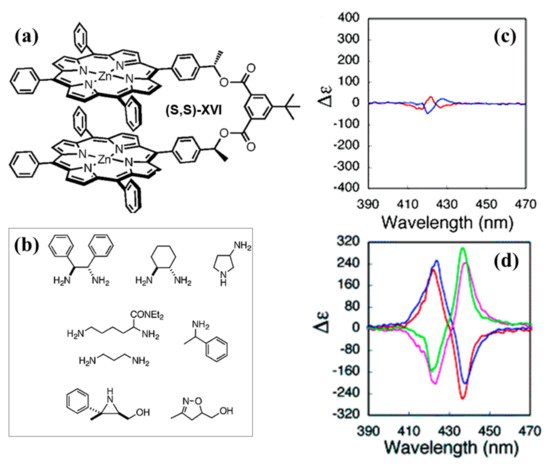 Figure 6. (a) Structure of the chiral bis-porphyrin XVI (reported the S, S-enantiomer); (b) Molecular structures of diamine, isooxazoline, and aziridines; (c) CD spectra of the bis-porphyrin enantiomer pairs (R, R-, red curve, S, S-, blue curve); (d) CD spectra of (R, R)-Zinc(II)-XVI in the presence of (i) (R)- (red curve) and (S)-cyclohexane diamine (pink curve), and those of (S, S)-Zinc(II)-XVI in the presence of (i) (R)- (blue curve) and (S)-cyclohexane diamine (green curve). Adapted with permission from reference [64]; published by American Chemical Society 2005.

Regarding the spectroscopic sensing, the binding of both chiral and achiral diamines tends to fix the conformation of the two porphyrin units, causing a significant amplification of the CD couplet. However, the effect of enhanced exciton coupling is strictly associated with the chirality and structure of the chiral diamine guests used. Interestingly, the binding with chiral diphenylethylene diamine leads to slight amplification of the CD signal as compared with uncomplexed porphyrin tweezer [64]. Conversely, the binding with chiral diamines having minor steric hindrance, such as cyclohexane diamine (CHDA), closes the two macrocycle chromophores, giving rise to an increased CD (Figure 6d). Noteworthy, in the case of diphenylethylene diamine and cyclohexane diamine, the sign of the CD couplets is governed by the initial chirality of guests used for the complexation (Figure 6 d).

Lu et al., reported in 2017 a chiral binaphthalene-bridged bisporphyrin with C2 symmetry (Figure 7 a, XX) able to recognize chiral diamines in chloroform [65]. The CD spectra of the two enantiomer pairs point out a mirror image with a bisignate couplet in the porphyrin Soret region (Figure 7b). The UV/Vis investigations revealed that both enantiomers showed enantioselectivity towards chiral 1,2 diamines, with the highest ratio of 5.07 observed for (1R, 2R)/(1S, 2S)-diaminecyclohexane. Nevertheless, different and almost specular dichroic spectra were obtained for R-enantiomer of the bis-porphyrin by the addition of (1S, 2S)-(Figure 7c) and (1R, 2R)-diaminecyclohexane (Figure 7d). 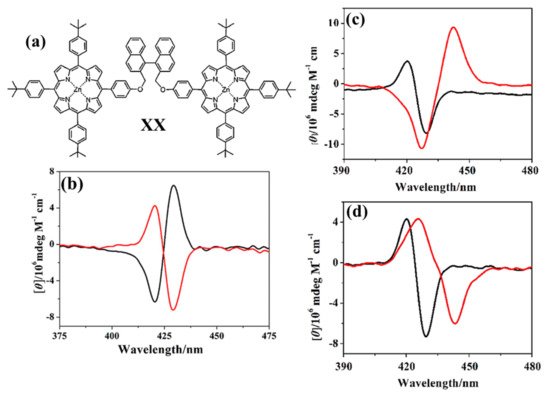 Chiral recognition is one of the most important issues in the natural world, and it is widespread in biological systems. Indeed, being of particular interest to researchers, such a phenomenon has been extensively studied over the past few decades. The basis of the chiral recognition mechanism is the formation of diastereoisomeric complexes between the enantiomers and a pre-organized chiral selector with a minimum of three-points interaction for the enantiomeric recognition [66][67][68]. Porphyrinoids and bis-porphyrinoids, owing to their versatile synthesis capacity, can be constructed appropriately as hosts for molecular recognition of a specific guest. In this review, several chiral guests were reported, especially amino acids and their derivates, for their biological relevance and analogous molecules, such as amines and diamines. However, most of the studies perform the chiral recognition phenomena in organic solvents (e.g., dichloromethane or chloroform), which do not hinder the supramolecular interactions between the hosts and guest molecules. Thus, the concepts gathered in this review may encourage the design of chiral porphyrinoid hosts able to enantio-recognize chiral molecules in water so as to mimic the biological aqueous environment.