Warthin tumor (WT) is a benign salivary gland tumor composed of oncocytic epithelial cells lining ductal, papillary, and cystic structures in a lymphoid stroma. Is the second most common salivary gland tumor. WT commonly affect individuals in ther sixth to seventh decade and have a link to cigarette smoking.

The Warthin tumor (WT) has been identified as the second most frequent benign tumor of the parotid gland, following pleomorphic adenoma [1]. WT is most frequently diagnosed in middle-aged or elderly patients, especially in those who smoke (>50 years), with a male preponderance. It is usually situated at the inferior pole of the parotid gland, level II in the European Salivary Gland Classification [2]. WT is an adenoma composed of a bilayered columnar and basaloid oncocytic epithelium that forms multiple cysts with numerous papillae, accompanied by a proliferation of follicle-containing lymphoid tissue [1]. The synonyms for WT include papillary cystadenoma lymphomatosum, adenolymphoma, and lymphomatous adenoma [1].
WTs usually present as a slowly growing, painless, or mildly uncomfortable swelling or mass on the inferior pole of the parotid gland, which often feels soft. Around 15% of WTs are multifocal in the same gland and in approximately 10% of cases are present bilaterally [1][3]. WTs have been reported in association with other salivary gland neoplasms (benign and malignant) [4]. It has also been reported that WTs arise in intra- and peri-parotid lymph nodes and may account for the diagnosis of the WT-isolated extraparotid gland in the neck [1][5].
The most common treatment has been a superficial or partial superficial parotidectomy. However, there still exist controversies on the extent of the surgery and in recent years extracapsular dissection is increasingly used. In fact, when a tumor is found during the follow-up, it is likely attributed to a second tumor rather than a true recurrence due to inadequate resection, given the fact that a WT may be multifocal [6]. Furthermore, the malignant transformation of a WT is extremely rare [1]. In recent years, active surveillance [7] has been proposed, but there is still no clear consensus on exactly which to choose for observation versus surgery.

Three aspects must be evaluated as follows: (1) clinical data, (2) imaging, and (3) cytology.
The most important clinical information includes age (usually more than 50 years old), smoking history, and location of the tumor (superficial, level II in the majority of cases [8]). In addition, bilateral, or multiple tumors are characteristic of WTs, as well as a previous homo or contralateral WT diagnosis. Patients under 40 years of age or with a solitary deep lobe tumor should be suspect and investigated for other diagnoses.
Imaging is especially important and can certainly help in the diagnosis of a WT. There are several available imaging modalities that we will not address in this manuscript; however, ultrasound, CT, MRI, and PET-CT are reliable imaging techniques and radiomics may be helpful in the diagnosis of WTs. Depending on the availability and experience of each center, a choice has to be made of which technique adds most to the diagnosis. Finally, cytology and or core needle biopsy should be concordant with the clinical and radiological diagnosis of WTs.
The accuracy of the diagnosis is based on the concordance of the three modalities: clinical, imaging, and cytology evaluation. If it is not feasible to reach a WT diagnosis, surgery should be indicated to assure the definitive diagnosis by histopathological examination of the resected specimen. When the diagnosis of a WT can reliably be established, optimal management may be debated. Surgery is not mandatory for all cases, and active surveillance can be an alternative or first choice (Figure 2). 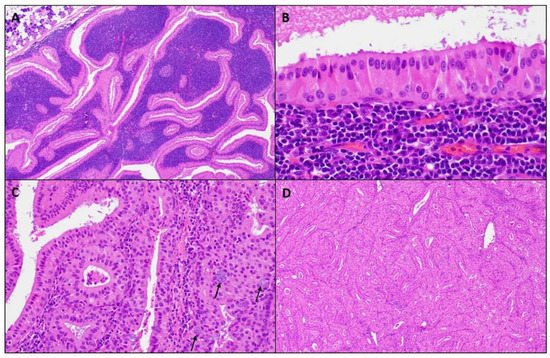 Overall, the cytological, macroscopic, and microscopic characteristics of a WT are typically straightforward, and, in most cases, does not represent a diagnostic challenge.
A fine needle aspiration biopsy (FNAB) identifying the triad of small oncocytic cells arranged in cohesive sheets or in papillary structures, numerous polymorphic lymphocytes, and a granular proteinaceous “dirty” background is used for the diagnostic [9]. In contrast to a surgical pathology specimen, cytology smears may be less representative, and the differential diagnosis in a FNAB is contingent to the combination of these three cytological components. Finding oncocytes and lymphocytes is common and, in this scenario, the diagnosis can easily be established. In contrast, when only one element is present, diagnostic difficulties may arise. The identification of only oncocytes may suggest various oncocytoid salivary gland neoplasms (benign or malignant), as the presence of lymphocytes alone might be confused with an intraparotid lymph node or lymphadenitis, while a salivary duct cyst can be suspected if the background granular debris predominates. As discussed below, squamous and mucous cell metaplasia are important diagnostic pitfalls in the WT, and in a cytology specimen, the identification of these findings might lead to the diagnosis of a squamous cell carcinoma or mucoepidermoid carcinoma. In addition, a granular “dirty” background can, on occasion, mimic the necrotic background characteristic of carcinomas [10].
The Milan System for Reporting Salivary Gland Cytopathology is gaining popularity and, following this reporting schema, WTs showing all these components fall within the diagnostic Category IV.A “Benign Neoplasm”, while oncocytic-predominant tumors might be classified as Category IV.B “Salivary Gland Neoplasm with Uncertain Malignant Potential (SUMP)” [11]. A recent international and multi-institutional study demonstrated an extremely high diagnostic accuracy of 96.1% for the diagnosis of WTs when this system is applied. The risk of malignancy in the benign neoplasm category for cases diagnosed as WTs is 1.3%; however, it is important to recognized that the risk of malignancy in the SUMP category for cases with a differential of WT was statistically higher (18.8%). This marked and clinically important variation in the risk of malignancy corresponds to broad differential diagnosis of oncocytoid salivary gland neoplasms [12].
Macroscopically, a WT is an encapsulated, soft, and fluctuant, round to oval mass. Not uncommonly, lesions can be multiple. The cut surface is tan-brown, smooth, or lobulated with multiple cystic spaces containing a brown to green viscous fluid. Microscopically at scanning magnification, the tumors are well-circumscribed, exhibit variable papillary and cystic architecture, and show a combination of oncocytic epithelial elements and lymphoid stroma (Figure 2). Some lesions occur within the intra- and periparotid parotid lymph nodes, while others are centered within the salivary gland parenchyma. The oncocytic epithelium that lines the papillae and cystic structures is bilayered. The inner luminal cells are tall and columnar with nuclei polarized towards the lumen, while outer basal cells have a cuboidal/polygonal configuration with basally located nuclei. The cytoplasm of both cell layers is densely granular and eosinophilic, while the nuclei are round to oval with conspicuous nucleoli. Scattered ciliated cells, mucocytes, as well as sebaceous cells can be appreciated. The lymphoid stroma is sharply demarcated from the epithelial component and is composed of mature lymphocytes showing well-formed lymphoid follicles with germinal centers. Usually, the lymphoid stroma is evenly distributed throughout the tumor; however, lymphoid stroma-poor lesions exist. Thick granular eosinophilic secretions are present with lumen of the cystic spaces and within the papillae.
WTs can undergo infarction, either spontaneously or after a traumatic event such as FNAB, and when this phenomenon occurs, the term metaplastic WT is used [13]. Microscopically, metaplastic WTs show various degrees of necrosis with ghost-like papillae, which can be highlighted with keratin or reticulin staining. Adjacent to necrotic areas, squamous and mucocyte metaplasia can be discerned. Reactive stromal changes associated with acute and chronic inflammation and granulation tissue may also be present. In many cases, the correct diagnosis is established by identifying a residual focus of a non-infarcted WT. However, when the squamous and mucocyte metaplasia is extensive, a WT may be misdiagnosed as a squamous cell carcinoma or mucoepidermoid carcinoma. In such cases, the lack of infiltrative growth and absences of marked pleomorphism and atypical mitosis in the squamous component supports a metaplastic process. In difficult cases where the diagnosis mucoepidermoid carcinoma is entertained, the evaluation for MAML2 gene rearrangement can solve the question, as a metaplastic WT does not harbor this molecular alteration [14].
On the other hand, a variant mucoepidermoid carcinoma—the so-called Warthin-like mucoepidermoid carcinoma—may be particularly problematic and must be distinguished from a WT [15]. Histologically, a Warthin-like mucoepidermoid carcinoma consists of multiloculated cystic structures associated with prominent lymphoid stroma including germinal centers. Cystic structures show a multilayered epithelium with variable eosinophilic to oncocytic cells with scattered mucocytes. Microscopic foci of the conventional mucoepidermoid carcinoma exhibiting epidermoid and intermediate cells are often present and their identification aids in making the current diagnosis. In equivocal cases, the presence of a MAML2 rearrangement confirms the malignant diagnosis [15][16]. Another differential diagnosis of a WT includes oncocytoma and nodular oncocytic hyperplasia. The former consists of a well-circumscribed lesion composed of oncocytic cells arranged in solid, trabecular, cord-like, or organoid growth patterns separated by a thin fibroconnective tissue stroma, while the latter is characterized by unencapsulated irregular oncocytic proliferation with solid, tubular, or trabecular patterns that are randomly distributed throughout the salivary parenchyma [17][18]. None of these lesions are typically associated with a rich lymphoid stroma.