According to the World Health Organization, the year of 2030 should witness roughly 12 million cancer-related deaths, making cancer one of the most prominent death-causing factors around the globe. In fact, the number of new cases of cancer (cancer incidence) is currently around 439 per 100,000 men and women per year [1][2][3][4][5][6][7][8]. Breast cancer (BC) has been considered the most frequent type of cancer disease worldwide among women, impacting 2.1 million women each year. In 2018, it was estimated that around 627,000 women died from BC; that is approximately 15% of all cancer deaths among women [9]. The highest incidence rates were observed in the United States and Western Europe. In the US, there were 101 new cases reported per 100,000 women, and in Europe, there were 85 [10]. East Asia has the lowest incidence with 21 cases per 100,000 women [10]. In Africa, the incidence is slightly higher with 23 cases per 100,000 women, but this amount can be undervalued due to a lack of accurate data [10].

BC is one of the leading causes of cancer-related mortality. The disease had always been common among women. That is supported by the fact that one of the first surgical treatments ever performed was BC treatment during the first surgical revolution at the end of the 19th century. BC rates are globally increasing and are higher among women in developed regions. The incidence and fatality increase with the increasing age of women as well. It was reported that statistically, women with an age 65 and above die with higher probability due to the disease [11][12][13]. The probability of the disease to develop within a woman’s lifetime has grown over the past few decades from 1 in 11 in 1975 to 1 in 8 in 2016 [13]. There are several risk factors behind BC, including age, geographic location (country of origin), socioeconomic status, lifestyle risk factors (smoking, alcohol, diet, obesity, and physical activity), low rates of breastfeeding, family history of BC, mammographic density, ionizing radiation, etc. [12].

If the BC is diagnosed at an early stage, a 5-year survival rate can reach up to 90% in developed countries [14]. On the other hand, once a BC is metastatic, the patient’s 5-year survival rate falls down to 27.4% [15]. Early diagnosis is needed for a successful treatment and high survival rate. T1 tumors with size less than 2 cm show a 10-year survival rate of approximately 85%, while T3 tumors show a 10-year survival of less than 60% mainly as the result of delayed accurate diagnosis [16]. Nowadays, mammography is used as a gold standard for early BC screening and detection, but it is less sensitive for young women (under 40 years old) with a sensitivity of 25–59%. A factor that is limiting the diagnosis of young women is a denser breast tissue compared to older women. Other limitations of mammography are high rates of false-positive and false-negative results which lead to biopsy, high cost of treatment, and procedural discomfort for the women [17].

To avoid development of the disease into advanced stages, there is clear need for early diagnostics, efficient treatment, and post-treatment monitoring. Therefore, there is an enormous demand for efficient less-invasive diagnosis i.e., analysis of cancer biomarkers in plasma/serum samples [18].

In humans, the breast has a number of functions. The mammary gland is a distinguishing feature of mammals, and its primary role is to produce milk to nourish offspring. The breast develops in the superficial fascia. Until puberty, the breast includes only few ducts in both men and women. In females, true breast development begins at puberty due to the effect of estrogen and progesterone [19]. The breast consists of 12–15 major breast ducts, which lead to the formation of a nipple. These are connected to ducts ending in a duct lobular unit, which is the functional milk-producing unit of a breast [20]. Breast ducts are surrounded by myoepithelial cells supported by connective tissue stroma and a variable amount of fat [19]. The terminal duct lobular units spread during pregnancy. Milk is produced due to the secretion of prolactin and oxytocin. Imbalance in estrogen and progesterone concentrations prior to menopause results in atrophic changes of a breast tissue.

From a clinical point of view, the lymphatic drainage of a breast has a big importance. Approximately 5% of the lymph from the breast drains through the intercostal spaces to nodes along the internal mammary vessels. The remaining 95% of the lymph drains toward the axilla in one or two larger channels. As a result of this fact, all patients with invasive BC should go through some form of auxiliary surgery to find out whether there is lymph node involvement [21].

BC is a heterogeneous disease with various subtypes accompanied by a series of genetic changes. Breast tumors originate in the anatomical structures of the mammary gland that form the mammary gland, fibrous tissue, and adipose tissue. Mammary gland tumors can be benign such as papillomas and fibroadenomas. The most common malignant tumors are carcinomas. BC is most often caused by the terminal lobes (lobular) of the mammary gland and their ducts (ductal) (Figure 1). Globally, approximately 80% of all diagnosed BC cases are of the ductal subtype [22]. These two subtypes cover 40%–75% of all diagnosed cases [23]. Other types of cancer are present in 10% of cases where inflammatory BC, male BC, Paget’s disease of breast, papillary carcinoma, and others are included [24]. BC can be classified by immunohistochemical examination into four subtypes: estrogen receptor (ER), progesterone receptor (PR), human receptor tyrosine-protein kinase erbB-2 (HER2), and antigen Ki-67 dependent [25]. 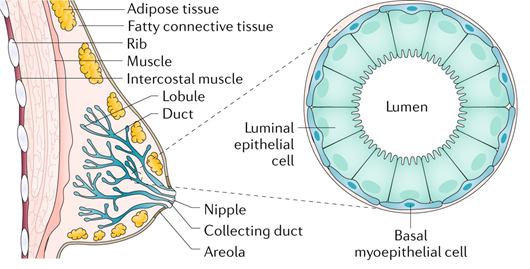 Figure 1. All breast cancers (BC) arise in the terminal duct lobular units (the functional unit of the breast) of the collecting duct. The histological and molecular characteristics have important implications for therapy. Several classifications based on molecular and histological characteristics have been developed. Reprinted by permission from Nature, Ref. [26], Copyright 2019.

Due to progress in genomics, proteomics, and glycomics, various candidate biomarkers have been identified with a clinical potential for BC management [27]. A tumor marker was first discovered in 1847, and currently, there are more than 100 known different tumor markers [28]. Biomarkers have great potential for screening and diagnostics because they are present in blood and provide information about the health condition [7]. In healthy individuals, the tumor marker concentration is at a very low level or even in some cases absent, while increased values can reveal development and/or progression of a disease [29]. Serum biomarkers providing key information about the disease are important for the management of cancer patients, since blood aspiration is only a moderately invasive procedure.

BC biomarkers (glycoproteins: mucin 1 (MUC1), HER2, carcinoembryonic antigen (CEA), epidermal growth factor receptor (EGFR), carbohydrate antigen 15-3 (CA15-3), CA 27-29, mammaglobin (MAM); DNA: BRCA1, BRCA2, proteins: Ki-67, OPN, microRNAs, and circulating tumor cells (CTC)) can be classified as diagnostic (healthy versus BC), prognostic (early BC versus advanced BC), predictive (provide information regarding whether a particular treatment will be beneficial for the BC patient) or therapeutic (a target biomolecule for therapeutics) based biomarkers [30][31].

Interestingly, although many studies have been published, only 9 biomarkers of cancer have been approved by the Food and Drug Administration (FDA) for clinical examinations so far. Since these biomarkers are all glycosylated proteins, changes in the glycan composition of these glycoproteins may serve as additional information for cancer diagnostics and/or prognosis. The following glycoprotein-based biomarkers have been published in the literature for BC management: HER2/NEU, CA15-3, CA27.29, MAM, galectin 3 binding protein, nectin 4, and fibronectin 1 with a typical concentration in human serum of 1-50 ng/mL [30]. The invasion, migration, and metastasis of cancer are caused by the deregulation of glycosylation related to an essential post-translational modification of proteins. In more than 90% of BC cases, there are observed changes in O-linked mucin-type glycosylation for example, expression of the Tn antigen, and the loss of core 2 O-glycans [32]. In BC, major glycan changes involve increased sialylation and fucosylation [33][34][35][36].

When new BC biomarkers are identified, it is of high importance to compare their clinical performance with already approved biomarkers in a form of AUC (area under curve) values in the receiver operating characteristic (ROC). The ROC curves calculated using the Youden index for the determination of CEA and CA15-3 showed AUC values of 0.616 or 0.678, respectively for CEA (cut-off value of 3.2 ng/mL) and CA15-3 (cut-off value of 13.3 ng/mL), when applied for disease-free survival examination [37]. We have found out clinical parameters for some of the novel BC biomarkers, showing significant advantage over already approved biomarkers. For example, Park et al. found out that the level of the human cytosolic thioredoxin correlated very well with the progress of BC [38]. At the cut-off value of 33.2 ng/mL, a sensitivity of 89.8%, a specificity of 78.0%, and an AUC value of 0.901 ± 0.025 were obtained by applying the ELISA format for thioredoxin analysis [38]. The ELISA method developed by Bernstein et al. resulted in an estimated AUC value of 0.892 using mammaglobin detection [39]. Thus, their method was able to distinguish healthy women from those having BC with high accuracy [39]. Yan et al. examined a clinical potential of the level of one type of fucosyltransferase (FUT4) determined in blood serum by ELISA for BC diagnostics [40]. AUC values of 0.784, 0.468, and 0.563 were determined for FUT4, CA15-3, and CEA, respectively. The results pointed out that FUT4 is in correlation with CA15-3 (p<0.05). Moreover, FUT4 could be applied besides BC diagnostics also for BC prognosis [40].