The vehicle technology is typically divided into four main categories. The sources of energy for a conventional vehicle are petrol or diesel fuel, which are the main contributors of carbon radiation in the environment. Therefore, the carbon emission rate of a hybrid is less than for conventional combustion engine vehicles. The third and fourth types are also known as zero-emission vehicles (measured at the tailpipe) which depend on the hydrogen fuel cell and battery, respectively.

Electric Vehicles (EVs) are experiencing rapid growth because of five key global trends: (i) Fossil fuel depletion and subsequent increases in fuel cost; (ii) Growing public awareness of and desire to combat climate change; (iii) Advances in technology and commercial effectiveness of renewable energy technologies; (iv) The development of electric motors and electronic control systems that control EV propulsion directly; and (v) Advances in EV supporting technologies such as Grid-to-Vehicle (G2V) and Vehicle-to-Grid (V2G).
The world is facing pressure on fossil fuels, so most countries are moving towards sustainable, reliable, efficient, economic, and green energy resources. Fossil fuels are one of the main threats to Earth’s environment as they contribute to many CO2 emissions. Figure 1 shows the percentage contribution of CO2 emissions by the (i) electricity and heat sector, (ii) transportation sector, (iii) industry sector, (iv) residential sector, and (v) other areas, according to the International Energy Agency [1].

Figure 1. CO2 emissions by different sectors.
Transportation is one of the significant emission sectors, contributing to 22% of the total CO2 emissions in 2020 [1]. Most public and personal vehicles run on Internal Combustion Engines (ICE), which can be considered as one of the major causes of climate change. On the other hand, EVs do not directly emit CO2 or are less susceptible to the high oil price.
To overcome the global emissions problem, most electric utility industries should move towards renewable resources, e.g., wind, solar, and wave/tidal. As an example, the Chinese government aims to install 150–180 GW of wind power and 20 GW of Photovoltaics (PV) power generations by 2020 [2,3]. The contribution of PV-based energy generation was less than 1% to U.S. electricity production in 2015. Still, due to the decreasing PV panel cost, solar energy production will continue to grow. It is projected that solar could contribute nearly 15% of U.S. energy demand until 2030 and 30% by 2050 [4,5].
The advancement of EV technology has increased the social and economic benefits in both the transportation and energy sector. Despite these benefits, battery technology limitations such as weight, lifespan, and storage capacity, and high battery cost [6,7] are still the major hindrances to the broad acceptance of EVs. However, many automotive industries, organizations, and countries are investing in the research and development of EV battery technology. For example, Google spent $10 million, and the U.S. government spent $2 billion on the development of an EV battery [3,8,9]. Moreover, the U.S. government has committed to bringing one million Plug-in EVs onto the road in the next five years. Considering the research and development in EV industries, according to the Australian Energy Market Commission (AEMC) global trend of increasing EV and decreasing ICE sales is also present. In Australia, the EV sale in 2019 was 6718, a 203% increase compared to 2018 [10,11].
Likewise, in recent years, the New Zealand government has set the target for the transition to 100% renewable electricity by 2035. In New Zealand 85% of electricity generation is based on renewable: 60% hydro, 18% geothermal, 5% wind, 2% biomass, and 15% is a fossil fuel, as shown in Figure 2. New Zealand’s strong point is the wide mix of renewables such as hydro, geothermal, wind, and biomass for electricity generation. As 30% of the fossil fuel is consumed by the transportation sector [12], this offers a good opportunity to transition from fossil fuels to renewable energy by using technology, such as the electric vehicle.

The main issue with ICE vehicles is fossil fuel consumption along with rising fuel prices and this causes two main problems: energy security and CO2 emission to the environment. According to the observatory of economic complexity at the MIT media lab, oil is the spark of life for humans and is imported from politically unstable countries [13]. Considering the pressure on fossil fuels and increment in the CO2 emission, EVs reduce the reliance on transportation on crude oil and reduce Greenhouse Gas Emissions (GHG) emissions.
The vehicle technology is typically divided into four main categories [14,15] shown in Figure 3; moving from left to right is an electrification increase. The sources of energy for a conventional vehicle are petrol or diesel fuel, which are the main contributors of carbon radiation in the environment. Therefore, the carbon emission rate of a hybrid is less than for conventional combustion engine vehicles. The third and fourth types are also known as zero-emission vehicles (measured at the tailpipe) which depend on the hydrogen fuel cell and battery, respectively. The details of the different technologies will be discussed in the sections below.

Hybrid Electric vehicles (HEV) have an ICE engine and a battery, both of which are used to propel the vehicle; thus, the source of energy can be a battery and/or ICE. As such, the HEV is also known as a dual-power-source vehicle. HEVs are better for urban driving because the battery can be recharged by recapturing the vehicle’s kinetic energy into the battery through regenerative braking. In urban driving, the vehicle often does start and stop. Therefore, HEVs are better for urban driving than rural or highway. Since the fully electric vehicle is in the early development stage, HEVs seem to be the most cost-effective solution so far, probably for the next decade [15]. To minimize pollution, the HEV uses the ICE engine and electric motor in the most efficient way to save energy. The advantages of HEVs are as follows [16,17,18]:

(i) Improved fuel efficiency and performance.
(ii) Lower fuel consumption costs.
(iii) Reduce CO2 emission.
(iv) Recovery of some energy via regenerative braking.
(v) Use of an existing fuel station.
(vi) The disadvantage is a higher initial cost due to the battery.

Figure 4. The Hybrid Electric Vehicle, Series-Parallel.
The controller obtains motor speed, generator speed, brake, and acceleration information from the vehicle dynamics. The electrical section obtains generator torque and motor torque from the controller, deciding when to charge and discharge the battery. Whenever a driver applies the brakes, the motor acts becomes a generator and starts to charge the battery; this is called regenerative braking [22,23]; otherwise, it will consume power from a battery. The electrical section consists of a synchronous motor and drive, a synchronous generator and drive, a DC-DC converter, and a battery bank.
The ICE obtains the throttle position from the controller used to regulate the amount of fuel or air entering the engine. As shown in Figure 4, the power split device is the brain of a hybrid vehicle that controls how the gasoline engine, generator, and electric motor work together. It allows the car to operate in series or parallel (independently, both the motor and ICE engine and both can power up the car) [22]. The vehicle dynamic provides vehicle speed which depends upon the vehicle body, road inclination, and wind resistance. Typical HEVs have four modes of operation [24], as shown in Figure 5.

(i) Start and Low to Mid-range Speeds: During low to mid-range speeds or at the vehicle’s starting, the engine stops, and the vehicle is propelled by the motor alone.
(ii) Driving Under Normal Conditions: The power split device sends some power to run the generator and the rest of the power to drive the wheels directly. If there is excessive power, then it’s used to charge the battery.
(iii) Sudden Acceleration: Both the battery and engine provide power during sudden acceleration.
(iv) Deceleration: The regenerative braking system converts the kinetic energy into electrical energy that is stored in the high-performance battery.

Due to the potential benefits of EVs, the authors [25] transformed the series-parallel hybrid into the fully EV as shown in Figure 6, which can take the real EV movement data and predict the State of Charge (SOC) of vehicles according to road inclination, vehicle weight, and wind resistance.

Figure 6. Proposed Electric Vehicle model.
The fully EV uses only a battery power pack to propel the vehicle. Therefore, EVs are better for combatting global warming as compared to HEVs. The EVs use only the battery to operate the motor which propels the vehicle and have a regenerative braking system to recapture vehicles’ kinetic energy into electrical energy to be stored in the battery. Therefore, EVs are better for urban driving because in urban driving, the vehicle frequently starts and stops, during which the vehicle recaptures some of the kinetic energy into the battery. As compared to typical HEVs, the EVs have only two modes of operation, which are as follows (see Figure 7): 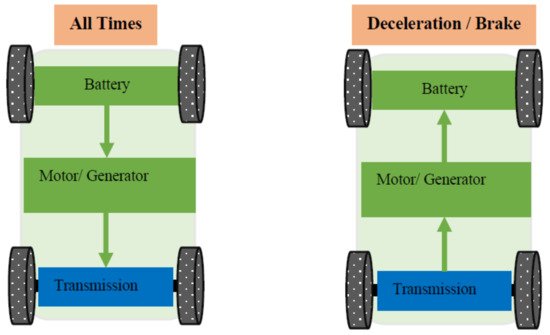 (i) All times: Whenever the vehicle needs to move, the battery propels the vehicle.
(ii) Deceleration or Braking: When the vehicle decelerates or brakes, the vehicle recaptures the kinetic energy into the battery using regenerative technology.

Fuel Cell Electric Vehicle (FCEV) uses electric powertrain like EVs; however, hydrogen is used as an energy source in the fuel cell tank. There is no tailpipe pollution; thus, it is considered a zero-emission vehicle. Based on the powertrain configuration, the FCEV is categorized into two types, namely:

The typical powertrain configurations of FCEV and FCHEV are shown in Figure 8. 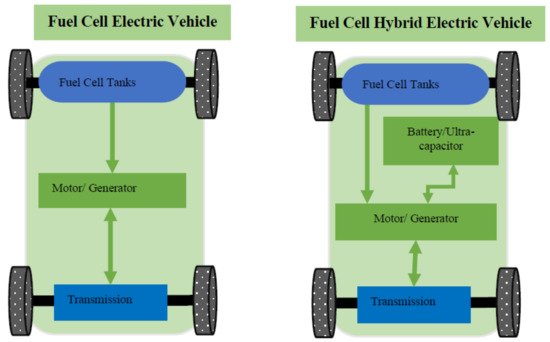 Figure 8. FCEV and FCHEV Powertrain configurations.
The FCEV is ideal for slow speed with smooth power demand applications such as buses, forklifts, and trams, etc. [26]. Nowadays, FCEV manufacturers such as Hyundai, Toyota, and Honda manufacture high-performance FCEV vehicles in terms of fuel economy and vehicle efficiency by adopting various energy management techniques [27].
However, FCHEV adds another auxiliary Energy Storage System (ESS) or ultracapacitor in the powertrain for high-speed operation, which can be charged and discharged based on the vehicle power demand and supply. The fuel cell tank is used as the main energy source, and ESS or ultracapacitor is used for smooth and efficient operation [28]. The only drawback of the FCHEV is the increase in weight due to the extra ESS or ultracapacitor in the powertrain.
Understanding the EV charging methods is as important as understanding the EV technology described in the above section. Therefore, the next section will briefly describe the existing EV charging methods.