The characteristics of CKD (chronic kidney disease) are similar to those of the aging process; therefore, it has been hypothesized that CKD promotes premature aging associated with related diseases. Furthermore, chronic diseases usually observed in aging, such as CVD, inflammation, vascular calcification, mineral, and bone disorders, and chronodisruption (chronic alteration of circadian rhythms), are markedly frequent in patients with CKD.

The aging process has well-defined characteristics in all living beings. Aging and the progressive physiological changes in an organism lead to senescence, a decline of biological function, and the organism’s ability to adapt to metabolic stress. Physiological aging is accompanied by an alteration of numerous biochemical parameters and a progressive decline affecting different organ systems, significantly affecting individual and social behavior [1]. All these changes worsen a person’s health status and reduce their quality of life.

The term “life expectancy” refers to the number of years a person can expect to live. Over time, the average human life expectancy has increased about 3 months per year, resulting in approximately 25 years to approximately 65 years in men and 70 years in women. This mortality reduction is mainly due to improvements in health, nutrition, education, income, health status, and medicine. Higher population longevity results in higher rates of aged people because age, as a chronological measure, is an important risk factor in multiple diseases, known as age-related diseases, including cardiovascular diseases, diabetes, and kidney diseases [2,3,4]. In the last 160 years, we have witnessed an improvement in the global life expectancy, which represents the delaying of the mean age of death. Despite life expectancy and aging being related, they have different means, and it is known that an increase in life expectancy can increase with age [5]. The World Health Organization (WHO) stated that age-related diseases increased in the last century due to the increase in lifespan, expecting a doubling of the world’s population aged over 60 years by the year 2050.

In contrast, pathological aging is marked by various physical and mental disorders, usually associated with physiological aging at earlier ages. These alterations are attributed to acute and/or chronic diseases, environmental factors, toxic habits (such as smoking and consumption of alcohol and other drugs), and cancer [15,16,17].

Aging is a haphazard process lead by multiple factors, socio/physiological/lifestyle/environmental circumstances, that humans are kept in continuous contact with, and therefore they could change our aging process during the development and the reproductive years. Aging is associated with more frequent development of chronic disease pathologies, such as cancer, infectious diseases, diabetes mellitus, obesity, metabolic syndrome, osteoporosis, neurodegenerative diseases, chronic kidney disease (CKD), and cardiovascular disease (CVD) [20,21,22]. Moreover, some age risk factors are smoking, hyperglycemia, hyperlipidemia, obesity, hypertension, dyslipidemia, and loss of bone density and frailty, grouped as metabolic risk factors that can lead to premature death [23,24,25]. All of them are considered metabolic risk factors that join with physical inactivity cause premature aging and the development of associated pathologies such as CVD and/or CKD. Coronavirus disease (COVID-19) is an infectious disease associated with worse effects and higher mortality in older people or those with comorbidities, i.e., those with a higher frailty rate [26]. In general, specific damages to organ systems during aging are characterized by 10 common traits ( Figure 1 ). 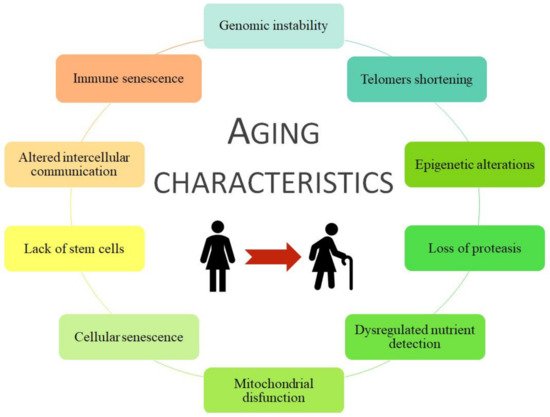 2. Frailty and Pathologies Associated with Aging

The accumulation of health problems increases vulnerability, which is different for each individual [30]. To define vulnerability, the term frailty was coined [31], as frail individuals exhibit a higher mortality rate than healthy individuals of the same age.

Frailty is one of the most well-known geriatric syndromes, which is more prevalent in females than males (with frailty percentages of 48.8% vs. 41.8%) [32,33] and is related to age and lower ability to maintain homeostasis. It is characterized by weakness, sarcopenia, reduced stress response, and low physical activity and resistance [34]. The higher frailty prevalent susceptibility in women versus men reduces physiological function and vests a greater risk of developing age-related diseases such as CVD associated-CKD [35].

There are different methods of assessing frailty in a person ( Table 1 ). However, the Frailty Phenotype and Frailty Index of Accumulative Deficits are the most accepted and validated tests [36]. In general, the frailty rate increases with age, reaching the peak of 85 years or more [30,37,38].

Age-related comorbidities increase the frailty rate. This phenomenon occurs in CKD, correlating with the appearance of comorbidities such as diabetes mellitus and CVD [26,39,40].

3. Premature Aging in Chronic Kidney Disease: A Process Associated with an Increase in Cardiovascular Pathologies

CVD is the most clinically relevant comorbidity associated with CKD [65]. The coexistence of both diseases could be explained by the following: (1) patients with CKD have a higher prevalence of non-traditional cardiovascular risk factors, (2) many cardiovascular risk factors exacerbate CKD progression, and (3) CKD itself can be considered a risk factor for CVD [66]. According to 2013 data from the U.S. Renal Data System, an estimated 43% and 15% of patients with CKD experience heart failure and acute myocardial infarction in their lifetime (versus healthy persons: 18.5% and 6.4%, respectively). In addition, CVD is the most important cause of mortality in patients with CKD undergoing dialysis. Mortality from cardiovascular problems is estimated to be two times higher in CKD stage 3 patients and three times higher in stage 4 patients than healthy subjects [66]. Cardiovascular mortality is inversely proportional to the GFR. Also, a higher CVD incidence has been observed in patients undergoing hemodialysis replacement therapy than in those undergoing peritoneal dialysis [66]. Moreover, the accumulation of uremic toxins from the renal pathology leads to chronic inflammation and an increase in oxidative stress, contributing to CVD development as damaged endothelial cells eventually become senescent [29,67].

The development of CVD in patients with CKD is due primarily to endothelial dysfunction [66]. Endothelial cells in patients with renal disorders experience premature senescence due to received stress signals, which may lead to apoptosis [68]. Under physiological conditions, endothelial cells have a non-adherent and anticoagulant surface; however, molecules expressed on the surface of damaged endothelial cells may be altered, increasing cell adhesion capacity [69]. Platelets bind to the damaged surface, triggering the onset of coagulation with consequent inflammation and thrombosis, thereby causing cardiovascular accidents [35].

Several factors, such as inflammation, oxidative stress, primary diseases such as hypertension or diabetes, and hyperlipidemia, contribute to endothelial deterioration in CKD. Another example is hyperphosphatemia, which is present in many patients with renal disorders. High phosphate concentrations increase oxidative stress and reduce the concentration of NO [70,71,72], which the endothelial cells release to relax and avoid the rigidity of the arteries and regulate endothelial permeability. In patients with CKD, NO synthesis decreases because the enzyme endothelial nitric oxide synthase (eNOS) expression is inhibited. Protein kinase C activation increases reactive oxygen species (ROS) production and inhibits eNOS expression [73].

Different potential therapeutic targets have been studied that are altered in uremic patients, highlighting the endocrine phosphate-fibroblast growth factor-23-klotho axis, the nuclear factor erythroid 2-related factor 2 (which regulates mitochondrial function and oxidative stress production), and molecules implicated in the mitochondrial biogenesis and the onset of cellular senescence [74].

Oxidative stress is defined as the accumulation of highly oxidizing molecules, including ROS, either by promoting or inhibiting the body’s antioxidant mechanisms. ROS have partially reduced oxygen metabolites with a high oxidizing capacity, and thus, they can oxidize different molecules, damaging them [75,76]. ROS are generated mainly in the mitochondrial respiratory chain by enzymes such as NADH oxidase (NOX), whose isoforms NOX1, NOX2, and NOX4 have been related to oxidative stress, worsening vascular function, and fibrosis [77,78].

To mitigate the oxidative stress in these patients, antioxidant substances are increased through aerobic exercise and diet (increased vitamin C/E/K and selenium consumption). However, these patients have dietary restrictions, making it difficult for them to consume these nutrients properly. In addition, vitamin C and selenium are lost during dialysis treatment [82,85,86]. On the one hand, vitamin K can mitigate oxidative stress and prevent DNA damage, senescence, inflammation, and aging, which explains why vitamin K deficiency is associated with higher mortality risk in patients with CKD in stage 5 [86,87]. On the other hand, it may seem controversial to recommend physical activity to avoid oxidative stress. It is true that exercise increments ROS production, inflammation, and fatigue however, this reaction is beneficial in the long term because it has been demonstrated that it improves antioxidant defenses and lowers lipid peroxidation levels in the young and the elderly [88].

The presence of inflammatory markers is a consequence of not only renal pathology but also renal replacement techniques. During dialysis, an inflammatory response occurs at the systemic level due to the production of pro-inflammatory and anti-inflammatory cytokines. The continuous irritation of the peritoneum during peritoneal dialysis activates genes related to adaptive immunity, promoting the response of Th2 lymphocytes [112]. In hemodialysis, the use of non-biocompatible membranes or non-sterile dialysis fluids contributes to inflammation [95], activating monocytes, and releasing pro-inflammatory cytokines [69]. Depending on the dialysate used, there may be an increase in oxidative stress related to increased specific pro-inflammatory cytokines and NO synthesis [113]. Furthermore, in vitro studies have shown that elevated magnesium concentrations in the acetate dialysis fluid increase ROS production and lipid peroxidation. However, this serves as protection against oxidative stress when other dialysates are used (such as citrate or a mixture of citrate and acetate) [114].