Impaired metal ion homeostasis at the cellular level is linked to mitochondrial dysfunction [12][13]. The dynamic balance of metal ions inside and outside the mitochondria plays significant roles in numerous cellular physiological processes, including activating ATPase, maintaining ATP production, keeping the homeostasis of mitochondrial volume, regulating the concentration of ROS, controlling signal transduction, and holding the balance of other ion concentrations. Furthermore, it has been reported that the metal ion dyshomeostasis in mitochondria is related to pathological features in neurodegenerative diseases, such as Alzheimer’s disease and Parkinson’s disease [12][14][15]. In addition, diseases related to mitochondrial metal ion dyshomeostasis also include cancer, type 2 diabetes (T2D), heart failure, ischemia and reperfusion injury [16][17][18][19][20]. It is particularly important to note that targeting certain mitochondrial metal ion channels/transporters can treat diseases, such as hypoxic pulmonary artery hypertension, cancer and neurodegenerative disorders [21][22][23]. 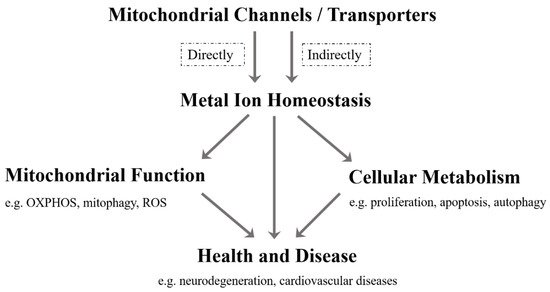 Mitochondria are the main utilization sites of iron which are transported to the matrix to synthesize iron-sulfur clusters and heme [24]. The precise regulation of iron ions in mitochondria is essential for hemoglobin production, Fe-S cluster protein assembly and heme biosynthesis during red blood cell development [25][26][27]. It is conceivable that mitochondrial iron homeostasis is involved in various hematological diseases. Mitochondrial iron homeostasis and its dysfunctions have been found in sideroblastic anemia and neurodegenerative disorders such as Alzheimer’s disease, Parkinson’s disease, Huntington disease, and Friedreich’s ataxia [25][28][29][30]. Strikingly, iron overload is the primary cause of increased morbidity in thalassemia [31], but the current research on the relationship between mitochondrial iron homeostasis and thalassemia is very rare. In fact, abnormal cellular iron metabolism is largely affected by mitochondrial iron dyshomeostasis, which may lead to iron overload associated side effects. In turn, an iron loss induced by iron chelator triggers mitophagy [32].

MFRN (SLC25A37) belongs to the vertebrate mitochondrial solute carrier protein family, which transports various metabolites and cofactors on the MIM. Some researchers show that the MFRN is a carrier of iron ions into mitochondria, and mitochondria of MFRN mutants disrupt iron ion uptake, leading to severe hypochromic anemia and stagnant red blood cell maturation [33][34][35][36]. In mouse embryonic stem cells, the lack of MFRN causes fibroblasts to stop maturing and inhibits heme synthesis [33]. The disruption of yeast MFRN orthologs MRS3 and MRS4 leads to defects in iron metabolism and mitochondrial Fe-S cluster formation [37][38]. The transferrin/transferrin receptor 2 (Tf/TfR2) transport system has been reported to deliver transferrin-bound iron to mitochondria, which is disrupted in Parkinson’s disease [39]. Another divalent metal transporter called DMT1 on the MOM also transports iron ions [40]. Overexpression of DMT1 is observed to increase the mitochondrial uptake of iron ions driven by proton gradients. Some small solutes and metal ions enter the mitochondrial membrane space through VDAC, which may involve iron uptake. Further research shows that VDAC is one of DMT1 interacting partners, and DMT1–VDAC interactions mediate mitochondrial iron uptake in cells [41]. Interestingly, mitochondrial ferritin (FTMT), as a novel iron-storage protein in mitochondria, participates in regulating iron distribution between cytosol and mitochondrial contents and has a protective effect in pathogenesis of neurodegenerative diseases in cell models [42][43]. It is worth noting that mitochondrial iron ion efflux channels/transporters have not yet been discovered, which requires an in-depth investigation ( Table 1 ).

Mitochondria are the main organelles producing ROS, the accumulation of which will cause cell toxicity, accelerated mutagenesis, lipid peroxidation, protein oxidation and cell death. Thus, the primary mechanism to eliminate ROS relies on superoxide dismutase (SOD), including the cytosolic copper/zinc-dependent SOD (Cu/ZnSOD) and the mitochondrial manganese-dependent SOD (MnSOD) [44]. MnSOD is the only SOD isoform present in mitochondria, which requires a manganese ion as a cofactor to execute its antioxidant defense function [45]. At the cellular level, SLC39A8 (ZIP8) and SLC39A14 (ZIP14) have been identified to specifically mediate manganese uptake in mammals [46][47][48], while SLC30A10 (ZnT10) controls manganese efflux from cells [49][50]. However, the manganese ion transport mechanism in mitochondria is still unclear. It has been proposed that manganese ion uptake from cytosol to mitochondria is possibly mediated via MCU or MFRN1 [51]. Cells lacking MCU are more resistant to Mn 2+ toxicity [52]. A potential role of mitochondria-localized SLC39A8 in the regulation of mitochondrial manganese ion transport will be an interesting point in future research. Of note, the potential role for altered Mn homeostasis and toxicity in neurodegenerative disorders has been reported, but whether it is related to mitochondrial manganese ion transport is still unknown [53][54][55].