Yeasts affiliated with the Metschnikowia pulcherrima clade (subclade) of the large ascomycetous genus Metschnikowia frequently turn out to produce the characteristic maroon-red pulcherrimin when tested for pigment production and prove to exert antagonistic effects on many types of microorganisms. The determination of the exact taxonomic position of the strains is hampered by the shortage of distinctive morphological and physiological properties of the species of the clade and the lack of rDNA barcode gaps. The rDNA repeats of the type strains of the species are not homogenized and are assumed to evolve by a birth-and-death mechanism combined with reticulation. The taxonomic division is further hampered by the incomplete biological (reproductive) isolation of the species: certain type strains can be hybridized and genome sequencing revealed chimeric genome structures in certain strains that might have evolved from interspecies hybrids (alloploid genome duplication). Various mechanisms have been proposed for the antimicrobial antagonism. One is related to pulcherrimin production. The diffusible precursor of pulcherrimin, the pulcherriminic acid is secreted by the cells into the environment where it forms the insoluble pulcherrimin with the ferric ions. The lack of free iron caused by the immobilization of ferric ions inhibits the growth of many microorganisms.

Metschnikowia Kamienski (1899) is a large ascomycetous genus currently comprising 79 species (Mycobank, 04. 2020) but the number or species is continuously growing. The M. pulcherrima clade of the genus contains seven validly described species that share the ability to produce pulcherrimin, a maroon-red pigment (reviewed in [1][2]). These species and the strains closely related to them have broad biotechnological potential for application in various industrial processes. In wine fermentation, these yeasts can modulate the population dynamics of the fermenting yeast communities and produce enzymes and a broad range of compounds that improve the aromatic complexity of the wine (for a review, see [3]). 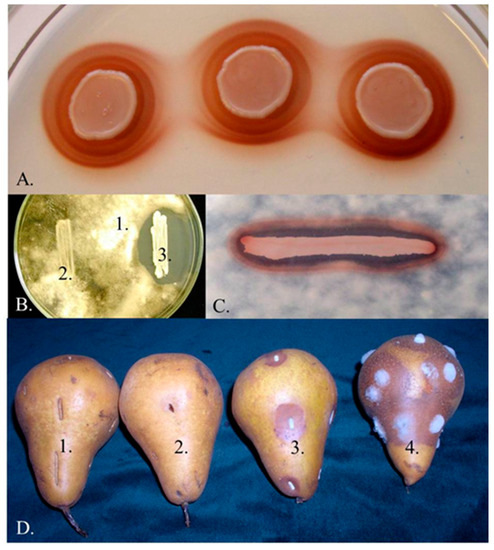 Over the past two decades, large numbers of strains isolated from various substrates have been assigned to one or the other of these species (preferentially to M. pulcherrima) on the basis of barcode sequence (preferentially the D1/D2 domains of the LSU rRNA genes and the ITS1-5.8S-ITS2 segments of the rDNA repeats) identities/similarities. The general practice of sequence-based strain identification is a search with the sequence of the strain in nucleotide databases for identical/similar sequences and assigning the strain to the species whose database sequence is found most similar. The sequence of the strain is then routinely deposited in the database (most journals request accession numbers) under this taxonomic name usually without an expert taxonomic verification. Since small sequence differences are usually tolerated during identification, the new entries will gradually fill up the barcode gaps separating the closely related species; the species boundaries gradually become fuzzy. Thus, the taxonomic identification of new isolates by comparing their rDNA sequences with those deposited in databases can easily lead to false results. In addition to this general problem, other difficulties can also arise when pulcherrimin-producing Metschnikowia strains are to be identified taxonomically. The results of the in-depth analyses of the rDNA repeats of certain type strains [5][6], the hybridization of type strains with each-other [6] and the analysis of genome sequences (e.g., [7][8][9]) raised doubts as to whether the taxonomic division of the M. pulcherrima clade is correct at all. The incongruences around the mechanism of the antimicrobial antagonism pose another problem. While many researchers associate it with iron depletion, others prefer the view that non-iron-related mechanisms similar to those known in other antagonistic microorganisms are also involved or even play the major role.

Pulcherrimin-producing Metschnikowia strains are common components of the yeast communities that colonise ripening fruits, flowers (nectar), tree sap fluxes and also frequently occur in fruit juices and fermenting wine (e.g., [2][3][4][10][11][12][13][14][15][16][17][18][19][20][21][22][23][24][25][26]). New yeast isolates producing the characteristic maroon-red pulcherrimin halos around their colonies (Figure 1A) are frequently declared to belong to M. pulcherrima without taking into account that M. pulcherrima is not the only pigment-producing Metschnikowia species. Over the past two decades, five additional species (M. andauensis, M. rubicola, M. shanxiensis, M. sinensis, M. zizyphicola) were validly described and M. fructicola, originally described as a pigment-less species has also turned out to produce pulcherrimin (for a review, see [1]). The intensity of pigment production is variable and highly dependent on the culturing conditions [1][33][34] and probably also on ploidy. The phylogenetic analysis of the barcode sequences of the type strains of the genus clustered these species in a group designated M. pulcherrima clade [1][2].

Recently, two additional species, M. persimmonesis and M. citriensis were proposed to accommodate pulcherrimin-producing strains. The taxonomic name M. persimmonesis was proposed for a single Korean isolate but without providing a complete taxonomic description [27]. The phylogenetic position of the strain is uncertain because its different rDNA barcode sequences (D1/D2, ITS and 18S) show the highest similarities to sequences of the type strains of different species. M. citriensis is based on two strains isolated from citrus leaves [30]. The taxonomic position of these strains is also somewhat obscure, because the authors found them closely related to M. koreensis based on the neighbour-joining analysis of the D1/D2 domains of the 26S rRNA genes, but the M. koreenesis sequence used in the analysis was a direct GenBank submission amplified from a strain for which no taxonomic description is available. The other closest relatives were strains of three pigment-producing members of the M. pulcherrima clade and the non-pigmented M. chrysoperlae, but only one sequence used in the phylogenetic analysis represented a type strain. As previous analyses found M. koreensis separated by a large phylogenetic distance from the M. pulcherrima clade [1][33], the proposed simultaneous close relationship to M. koreensis and the M. pulcherrima clade needs to be revised or reinforced by the analysis or more sequences. Interestingly, when the ITS sequences are examined, the M. citriensis type strain differ more from the other M. citriensis strain than from the M. persimmonesis type strain. Besides, both the D1/D2 and the ITS sequences were cloned, and a phylogenetic analysis based on cloned sequences can easily be misleading in this group of yeast species because of the very high intragenomic diversity of the rDNA repeats (see below). The formation of spheroidal ascospores is another problematic feature of these isolates. M. pulcherrima and its relatives have needle-shape spores [33]. Because of these uncertainties, further examination is required to validate the status of M. persimmonesis and M. citriensis as distinct species. Nevertheless, most properties of their strains and the results of the sequence analyses indicate taxonomic affinity with the M. pulcherrima clade. Many pulcherrimin-producing isolates were not identified at the species level or could not be assigned to any species and were therefore only classified as Metschnikowia sp., M. aff. pulcherrima or M. aff. fructicola. On the other hand, many strains have been classified into these species without presenting sufficient taxonomic evidence. Since pigmentation is an irrelevant property in most biotechnological processes, the strains isolated for industrial purposes are normally not tested for pulcherrimin production. Therefore and because of the sensitivity of pulcherrimin synthesis to the culturing conditions, it is unknown whether pigmentation is a general ability of all strains of the clade.