3D braiding technologies enable the production of structures with complex geometry, which are often used for lightweight solutions, for example in automotive engineering. In addition, medical technology offers wide-ranging applications for 3D braiding technology. 3D braided structures are defined as those with yarns that intersect in all three spatial directions. 3D braiding processes allow the fiber orientation to be easily influenced, thus ensuring high strength and stiffness with reduced mass.

Circular braids represent three-dimensional textiles, as they enclose a volume, but consist of a two-dimensional yarn architecture. 3D braids are defined by a three-dimensional yarn architecture. Historically, 3D braids were produced on row and column braiding machines with Cartesian or radial machine beds, by bobbin movements around inlay yarns. 3D rotary braiding machines allow a more flexible braiding process, as the bobbins are moved via individually controlled horn gears and switches. Complex 3D structures can be produced in just one process step due to the high degree of design freedom. 3D braiding offers many advantages compared to 2D braiding e.g. production of complex three-dimensional geometries in one process step, connection of braided layers, production of cross-section changes and ramifications, local reinforcement of technical textiles without additional process step. (This Encyclopedia entry is based on the publication "Innovation in 3D Braiding Technology and Its Applications" and the references cited therein. [1] )

Braids are generally divided into 2D braids and 3D braids. 2D braids include flat braids and circular braids[2]. Although the latter represent three-dimensional textiles since they enclose a volume, they consist of a two-dimensional yarn architecture. 3D braids, on the other hand, have a three-dimensional yarn architecture. They are also referred to as integral textiles and are characterized depending on the yarn orientation, the amount of yarn groups and the integral yarn course of the braid’s yarns. The integral yarn course is a crucial characteristic feature of 3D braiding. As the yarns cross the entire cross-section of the preform, it intertwines with the various yarn groups and connects the individual layers of the 3D-braid[3][4]. Thus, a delamination of layers in the three-dimensional preform geometry is avoided and significantly distinguishes 3D-braids from 2D-braids. Furthermore, the mentioned features of the 3D braiding technology allow the production of complex 3D-braided structures for the medical sector. [4][5] 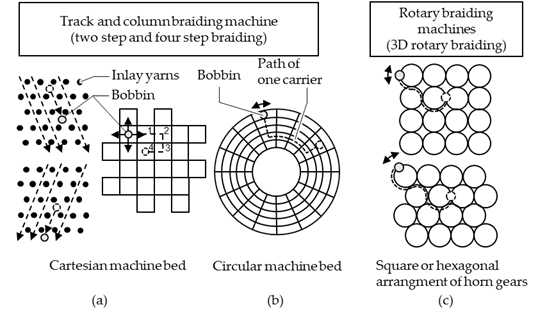 The so-called row and column braiding machines consist of a rectangular or round machine bed on which the bobbins move in a Cartesian or radial way on concentric circles [3,4]. In the two-step process inlay yarns are arranged in the shape of the desired product contour. In this way, the desired three-dimensional braiding structure is created by crossing the braiding threads and moving around the inlay yarns.

In the four-step braiding process, the bobbins are moved in four successive steps which describe one braid cycle. First the columns are shifted a specific distance in an alternating way, subsequently the tracks are moved alternately.  The two last steps describe the reverse motion of step one and two to move the tracks and columns in their initial position.  This process can be used to produce preforms with square, rectangular, T-shaped or I-shaped cross sections. For the production of round profiles, the radial four-step braiding process is suitable, in which the bobbins move on and between concentric circles.

From a technical point of view, rotary braiding machines are an extension of the horn gear technology of conventional braiding machines to an entire braiding bed. The square or hexagonal arrangement of the horn gears results in an arrangement that can be used to produce three-dimensional structures in addition to two-dimensional braids. Since the bobbins on each horn gear can move almost independently of each other in the rotatory braiding principle, it proves advantageous for producing complex braids.

In addition to the weight advantage over metallic structures, FRPC structures based on 3D braided semi-finished products can be used for crash-loaded structures due to their high energy absorption capacity. With 3D braiding technology, such a near-net-shape T-profile geometry can be produced using only one process step. In comparison with a T-shaped geometry formed from an originally flat 2D braid, or alternatively from a flat woven preform, this simplifies the process chain. Furthermore, the intertwining of the layers is responsible for the exhibition of high delamination resistance in cases of high loads and stresses.

Due to the high brittleness of ceramics, modification is required to increase damage tolerance. With the integration of textile semi-finished products in ceramics, the mechanical properties can be increased compared to monolithic ceramics. However, the use of the 2D fiber-reinforced CMC class of materials remains limited to predominantly thermal applications due to their high shear susceptibility. 3D braiding technology, on the other hand, makes it possible to use CMCs in structural components with higher demands on delamination behavior by connecting the individual layers in all three spatial directions. Of particular interest is the use of such 3D braided components in aircraft turbines, such as in turbine blades. Here, process efficiency can be increased through higher combustion temperatures. Further applications of 3D braided CMCs could include media lines, solar thermal power plants, or solid oxide fuel cells [34]. With the increasingly advanced 3D braiding technology, the potential application areas in the field of composite structures are simultaneously increasing.

Synthetic ligaments show deficits regarding mechanical long-term performance. By using degradable polymeric yarns tissue engineering scaffolds for tendon regeneration and augmentation can be created. 3D braids offer improved mechanical properties i.e. maximal tensile force and stiffness, due to the interconnection of the different braid layers. The dense packing of the machine bed enables in particular a gentle fiber processing of degradable and fine polymer materials. The fibers can serve as a guide structure for cells due to three-dimensional deposition.

Tumors in bifurcations in e.g. the respiratory tract have to be treated extensively, for example by double stenting. Self-expanding bifurcation stents made of Nitinol allow a simplified treatment. By 3D- braiding these stents can be manufactured in one process step. The braiding angle, number of filaments and bifurcation angle can be adjusted individually. By switching between different braid geometries e.g. round braid and flat braid, holes can be introduced into the structure to accommodate the patient's individual anatomy. Further applications can be occlusion devices and blood filters for the venous system.

The technology of 3D braiding offers further development opportunities in the future. In both the 3D rotary braiding machine and the 3D hexagonal braider, the integration of further sensor technology for monitoring the braiding process offers an expansion of the process stability, speed and quality control. This includes, for instance, sensors for monitoring the position of the bobbins and monitoring of the braiding point with integrated control of the take-off speed. Based on this further development, the monitoring of the entire process chain is to be addressed and extended.

In order to expand the application fields of the 3D braiding machines, the extension of the hexagonal braider to a larger machine bed is to be addressed. In this way, the high packing density of the switching devices can also be used in the field of braided reinforcement preforms for lightweight composite materials. Thereby, larger and more complex cross-sections can be implemented. For the processing of glass and carbon fibers, the adaptation of the bobbins to the switching devices will be necessary.

In future generations of 3D braiding machines, an electromagnetic control of the machines is a possibility to simplify the 3D braiding process as it is no more limited to the mechanics of the horn gears and bobbin tracks. Hence, it will shorten the set-up time of the process but more important increase the flexibility of the 3D braiding machine technology and therefore increases accuracy and precision of the near-net shape 3D braid geometry.