Sinonasal squamous cell carcinomas are a group of diverse tumors affecting the nasal cavity and paranasal sinuses. As a direct consequence of their rarity and heterogeneity, diagnosis is challenging, and treatment does not follow universally accepted protocols.

Squamous cell carcinoma (SCC) of the sinonasal tract (SNSCC) is “a malignant epithelial neoplasm arising from the surface epithelium lining the nasal cavity and paranasal sinuses and exhibiting squamous differentiation” [1]. Despite this relatively simple definition, SNSCC includes a wide group of tumors with heterogeneous biological features, as witnessed by the fact that its genetics showed partial overlap with respect to other sinonasal cancers, such as sinonasal undifferentiated carcinoma (SNUC) and neuroendocrine carcinomas (NECs) [2]. As opposed to other sites of the head and neck (HN), SNSCC does not rarely display features pertaining to other rare sinonasal tumors, thus mirroring the unparalleled biological heterogeneity that is observed in cancers of the sinonasal tract within the context of a single histology. Differently to other HNSCCs, the putative etiological role of tobacco smoking is based upon frail and dated evidence [3], and alcohol consumption has not been demonstrated as being a risk factor for SNSCC. Several patients affected by SCC of the nasal vestibule had a history of tobacco smoking [4,5], which probably led some authors to find an association with this risk factor when SCCs of the nasal vestibule, nasal cavity, and paranasal sinuses are grouped altogether. On the other hand, occupational exposure to leather dust, chromium, arsenic, asbestos, and/or welding fumes was found to increase the risk of developing an SNSCC [6,7,8]. Similar to some HNSCCs, transcriptionally active human papillomavirus (HPV) has been found in some SNSCCs, though the causative role of viral infection and its prognostic implications are still a matter of debate [9]. However, recent publications converge in stating that HPV probably has a role in determining SNSCC and implies a better prognosis compared to HPV-negative tumors [10,11,12]. In a similar fashion, Epstein–Barr virus (EBV) has been detected in a relevant proportion of SNSCCs [13,14]. However, since a similar proportion of EBV infection was observed in nasal polyps, its role in SNSCC carcinogenesis is questionable [14].

SCC is the most common malignant neoplasm of the nasal cavity and paranasal sinuses. Approximately 50–60% of all sinonasal cancers are SCC [16]. SNSCC is classified as either keratinizing (KSCC) or non-keratinizing (NKSCC): approximately 50% are KSCCs and 30% are NKSCC, the remaining 20% being represented by other variants of SCC [17]. KSCC exhibits irregular nests and cords of eosinophilic cells demonstrating keratinization and inducing a desmoplastic stromal reaction, similarly to conventional SCC of other HN sites, and its grade is classified as well, moderately or poorly differentiated [1]. NKSCC is characterized by a distinctive ribbon-like growth pattern, with absent to limited maturation. Historically, NKSCC was also called “Schneiderian carcinoma”, “transitional cell carcinoma”, or “cylindrical cell carcinoma” in relation to the patterns of growth and cell morphology [17,18]. Currently, these terms are considered as obsolete synonyms of NKSCC [1]. There is no established role for tumor grading in NKSCC, and it is unclear whether the prognosis differs from that of KSCC [1]. Other morphological variants of SNSCC, each with special histopathological appearance and features, account for approximately 20% of cases. The five main variants of SCC are the following: adenosquamous, spindle cell (also referred to as “sarcomatoid”), basaloid, papillary, and verrucous SCC. The aforementioned variants are associated with a 5-year disease-specific survival (DSS) of 15%, 32%, 56%, 62%, and 70%, respectively [19]. The 5-year DSS of patients affected by conventional SNSCC (i.e., considering both KSCC and NKSCC) is 45% [16].
The maxillary sinus is the most common site affected by SCC of the sinonasal tract (approximately 60% of the cases), followed by the nasal cavity (25%), and ethmoidal complex (15%) [16]. SCCs arising from the maxillary sinus present a different behavior compared to those originating from the nasoethmoidal complex. For instance, though regional lymph node metastases are overall uncommon in SNSCC, maxillary SCCs classically present a higher rate of nodal involvement compared to nasoethmoidal SCCs, probably due to the different lymphatic drainage of the two primary sites [20].
Malignant transformation of Schneiderian papillomas is a known phenomenon, particularly for inverted papilloma, whose transformation rate to SCC is reported as being as high as 10% [21]. Approximately 15% of all SNSCCs are either synchronously or metachronously associated with papilloma [22,23]. Tobacco smoking is thought to be a factor promoting transformation of Schneiderian papillomas into SNSCC [24].
Interestingly, approximately 20–25% of SNSCCs test positive for HPV. The majority of these are in the NKSCC cohort, which is histomorphologically similar to HPV-positive SCC of the oropharynx. The implications of this association are not clear yet. However, recent studies suggested a more favorable outcome in HPV-positive SNSCCs [11,25,26,27]. HPV-related multiphenotypic sinonasal carcinoma (originally called “HPV-related carcinoma with adenoid cystic-like features”) is a recently recognized variant of sinonasal carcinoma showing histologic features of surface dysplasia and an adenoid cystic carcinoma-like pattern, and presenting a strong association with HPV, particularly HPV-33 [28]. Even though these tumors are often large and destructive, they tend to exhibit a relatively indolent behavior. In fact, although local recurrence is frequent, distant metastasis and death related to the disease are very uncommon [28,29].
Another pathological entity to be considered is NUT carcinoma [1,30]. Histologically, NUT carcinoma grows as nests and sheets of undifferentiated cells within the sinonasal submucosa. NUT carcinoma is highly infiltrative, does not display any carcinoma in situ component, and shows necrosis, high mitotic rate, and an intratumoral acute inflammatory infiltrate [31]. Two histologic hallmarks of NUT carcinoma are monotonous tumor cells and a peculiar pattern of keratinization, often described as “abrupt” [31]. NUT carcinoma is characterized by rearrangements of the NUTM1 gene on chromosome 15q14: the most common fusion partner is BRD4 (in about 70% of cases) [31]. It is considered the most dedifferentiated variant of SNSCC, and is associated with a dismal prognosis and a poor response to any treatment, with a median OS of 6.7 months [32].
The differential diagnosis of poorly differentiated SNSCC is challenging and includes: SNUC (including those characterized by molecular identifiers, such as IDH2-mutant SNUC, SMARCA4-deficient carcinoma, and SMARCB1/INI1-deficient carcinoma), NECs, and adenoid cystic carcinoma [1,33,34,35,36].

Preoperative histologic diagnosis of a given sinonasal lesion is essential to correctly plan a proper treatment strategy. Even to an experienced subspecialty pathologist in referral centers, this could be challenging because of non-specific presentation, overlapping appearance of different neoplasms, and the large miscellany of different possible histologies. Preoperative diagnosis has been reported to be non-concordant to the final histopathological diagnosis in 7–10% of HN cancers [37,38]. Not surprisingly, the highest rate of discrepancy was found in the sinonasal tract, with misdiagnosis observed in 23.8% [38]. In a cohort of 52 sinonasal tumors analyzed by Ganti et al., the rate of discordance was 21.2%, with fibro-osseous lesions and small blue round cell tumors associated with the highest diagnostic discrepancy rate [39]. These findings justify the general recommendation to provide the pathologist with abundant material to formulate the pretreatment diagnosis, as emphasized by Schreiber et al. [40]. Of note, while SCC is the most common histology among cancers arising from the maxillary sinus, a pretreatment diagnosis of SCC has been associated with the lowest diagnostic reliability rate (50%) in tumors centered in the nasoethmoidal area [40].

Another crucial step in treatment planning for sinonasal tumors is the analysis of local extension, with special reference to skull base, orbit, and infracranial spaces (i.e., pterygopalatine fossa, infratemporal fossa, and parapharyngeal space), which allows a “T category” to be attributed to a given sinonasal cancer according to the latest TNM classification criteria [41]. In this regard, cross-sectional imaging plays an invaluable role, with the gold standard represented by a combination of computed tomography (CT) and magnetic resonance imaging (MRI) (Figure 1 and Figure 2) [42]. 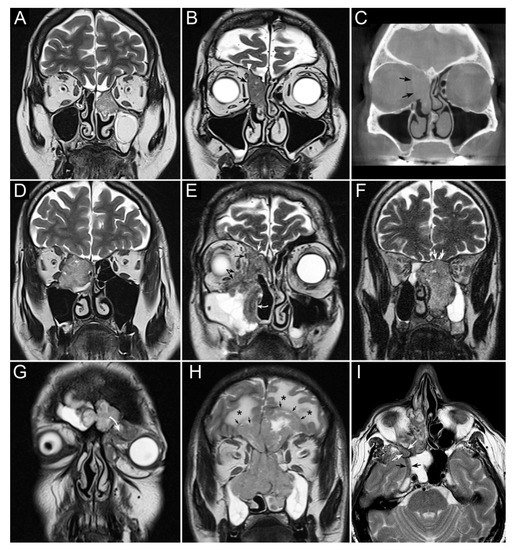 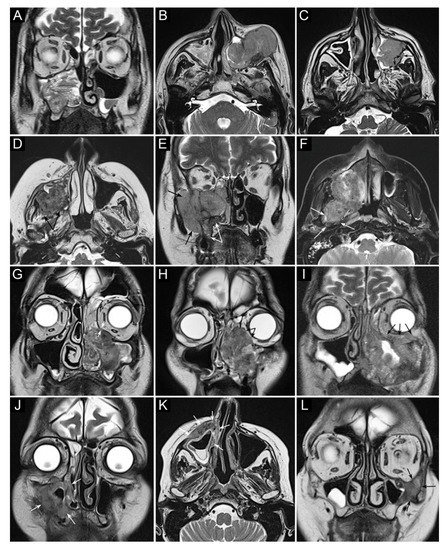 Figure 2. Panel summarizing several patterns of local extension of maxillary squamous cell carcinoma (SCC) and other epithelial cancers. (A) SCC ex inverted papilloma limited to the right maxillary sinus. A quite regular striated appearance indicates the papilloma (dotted curved lines). (B) Poorly differentiated SCC of the left maxillary sinus with massive infiltration of premaxillary tissues. (C) Spindle-cell SCC of the left maxillary sinus with initial infiltration of the fat pad located within the infratemporal fossa (arrows). (D) Moderately differentiated SCC of the right maxillary sinus with massive infiltration of the infratemporal fossa (arrows). (E) Neuroendocrine carcinoma of the right maxillary sinus infiltrating the ipsilateral nasoethmoidal compartment and alveolar process (white arrows), and massively invading the infratemporal and temporal fossae (black arrows). (F) Poorly differentiated SCC of the right maxillary sinus invading the infratemporal fossa, medial and lateral pterygoid muscle, and the upper parapharyngeal space (arrows). (G) Poorly differentiated SCC of the left maxillary sinus with initial orbital encroachment; the T2-hypointense line separating the tumor from the extraconal fat is partially interrupted, suggesting initial invasion of the extraconal compartment (arrows). (H) Moderately differentiated, keratinizing SCC of the left maxillary sinus with orbital involvement; a T2-hypointense line separating the tumor from the extraconal fat cannot be depicted (arrows). (I) Poorly differentiated SCC of the left maxillary sinus with massive invasion of the extraconal fat (arrows). (J–L) Three examples of SCC of the maxillary sinus with permeative bone invasion, which consists of cancer progressing within bone structures while partially maintaining their initial shape (arrows).
Sinonasal tumors can extend to the adjacent regions by transgressing the bony walls of the nasal cavity and paranasal sinuses. Structural changes and reabsorption of these thin bone structures are well depicted by CT by virtue of its high spatial resolution and capability of demonstrating bone density alterations [42,43,44]. On the other hand, gadolinium-enhanced MRI is the dominant tool for structural imaging and is paramount in describing soft tissues involvement, both at the sinonasal region boundaries (periosteum/periorbit and dura mater) [45,46,47] and in the adjacent regions (e.g., brain, orbital content, cavernous sinus, internal carotid artery) [48,49].
SNSCC may occasionally arise from an inverted papilloma, posing an additional issue of differential diagnosis. In this respect, MRI plays a central role in differentiating benign inverted papillomas from SCC; low apparent diffusion coefficient (ADC) value [50] and increased maximum standardized uptake values (SUV) on 18F-fluorodeoxyglucose-positron emission tomography (FDG-PET)/CT are associated with higher probability of malignancy [51,52]. However, this result was not confirmed in other studies [53,54]. ADC value also proved useful in differentiating sinonasal lymphoma and SNSCC [55].
FDG-PET/CT is an essential tool for initial staging of advanced HNSCCs, since it enables simultaneous acquisition of anatomical and metabolic data of the primary tumor, provides an accurate diagnosis of regional neck metastases, and allows the identification of distant metastases in a single session [56]. In the sinonasal tract, different SUV from FDG-PET/CT can play the role of a “metabolic biopsy” in categorizing sinonasal neoplasms into different histopathologic subgroups [57]. FDG-PET/CT has also been suggested for serving as a prognosticator in patients with sinonasal malignancies [58,59]. Absence of pathologic uptake at the first post-treatment PET/CT is highly predictive of significantly better OS, as for other SCCs of the HN [60].