Pseudophosphatases are important regulators, and their proper regulation is important for maintaining homeostasis and preventing diseases.

Over the past decade, the relevance of pseudoenzymes has been elevated and solidified as important signaling regulators. These modes of action and their roles in various cellular processes serve as an idea link for the roles of pseudoenzymes in pathologies and diseases. Misregulation of pseudoenzymes has been implicated in the etiology of various diseases such as cancer, obesity, and neurological disorders [4,5,7,8,9]. This review highlights the signaling pseudophosphatases and their implications in diseases, while demonstrating some of their essential roles in preventing or causing such diseases.

Pseudophosphatases of PTPs are widely accepted as having mutations within their signature active site motif (HCX5R) They maintain the three-dimensional fold and the ability to bind phosphorylated proteins [4,11,16]. Recent reports have advanced the field, complicating the mutated sequence definition [11,17] and the “grab and hold on” perspective, where pseudophosphatases stably interact with phosphorylated residues, thereby competitively inhibiting active phosphatases or kinases [11,16]. For example, the histidine domain containing protein tyrosine phosphatase (HD-PTP) is reported as a pseudophosphatase [4,5,18,19,20,21,22] and an active phosphatase [4,5,14,23,24].

This dual and contradictory functionality of HD-PTP highlights the complexities of investigating pseudophosphatases. Wishart and Dixon defined pseudophosphatases as STYX domains, and demonstrated a loss of function of dephosphorylating phosphorylated substrates [12]; thus, they defined the prototypical STYX domain beyond pure bioinformatics [12]. The analysis of pseudophosphatases through a combination of sequencing and functional experiments—dephosphorylation assays with appropriate substrates and contextual situations (localization, substrates/interactors, or abundance of interactor or pseudphosphatase—will provide more of an insight into the full spectrum [4,5,7]. Nevertheless, the roles of pseudophosphatases as regulators in many cellular processes such as spermatogenesis, stress response, neuronal differentiation, cell fate, migration, ubiquitylation, demyelination, oocyte-to-zygote transition, transcription, and apoptosis [4,6,7,16,20,22,25,26] have led to interest into their apparent roles in diseases.

The increased interest in pseudophosphatases resulted in the discovery of their relevance in many diseases. provided a useful framework for pseudophosphatases’ linkage to diseases [7]. Mutations of these molecules or their misregulation leads to diseases such as leukemia, breast cancer, colorectal cancer, hepatocarcinoma, glioblastoma, other cancers, Charcot-Marie-Tooth (CMT) disease (abnormal nerve myelination), obesity, diabetes, chronic obstructive pulmonary disease (COPD), and nephrotic syndrome [5,7,27,28,29,30,31,32,33]. A comprehensive list of the known functions of pseudophosphatases and their implications in diseases is provided in Table 1.

The proteins here all contain alterations in their catalytic active site motifs that are associated with loss of phosphatase function.

Furthermore, those that have not been linked to diseases have functions that may allude to a possible role in diseases. The diversity of these diseases, such as various types of cancer, COPD, CMT, obesity, diabetes, etc. Furthermore, their diverse range, while validating the intricate roles of pseudophosphatases in signaling cascades, also makes understanding their many functions in diseases more complicated. Considering this special edition focused on the roles of protein tyrosine phosphatases in signaling, with an emphasis on therapeutic strategies, the pseudophosphatases’ signaling mechanisms linked to diseases, myotubularins, tensins, and STYX pseudophosphatases, was discussed in more detail.

Six of these genes produce pseudophosphatases, which form complexes with their active homologs [27,71,72] (Figure 1A). This dimerization is context dependent, resulting in complex stability, enhancement of catalytic function (increased phosphatase activity), and regulation of the subcellular localization of the active phosphatase [73,74]. The coupling of active and inactive MTMs to form heterodimers is common; however, self-association to form homodimers also occurs among both active and inactive MTMs (Figure 1A) It is of interest that some MTMs have not been reported to interact directly as dimers [72]. 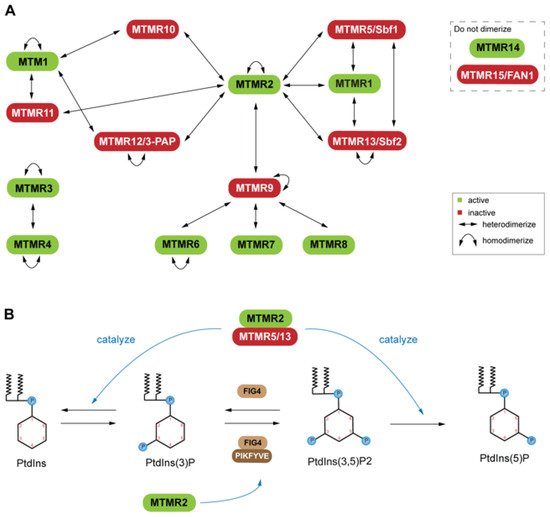 Figure 1. Dimerization states of the myotubularin (MTM) family: (A) Active and catalytically inactive forms are indicated in green and red, respectively. Active and inactive coupling (heterodimerization) is common; however, self-association (homodimerization) has also been reported among both active and inactive MTMs. MTMR14 and MTMR15 are not known to dimerize. (B) Phosphorylation schema for phosphatidylinositol (PtdIns), a molecule important for endosomal-lysosomal membrane trafficking, with example PtdIns kinases (PIKFYVE) and non-MTM phosphatases (FIG4), along with active and inactive MTMs (labelled green and red, respectively). Heterodimerization of an active (MTMR2) and inactive (MTMR5, MTMR13) leads to a stabilized complex with PtdIns phosphatase potential. MTMR2 and FIG4 interactions have been implicated in vivo, though further characterization is necessary.

For example, mutations of MTMR2 and MTMR13 leads to misregulation of the AKT signaling in Type 4B Charcot-Marie-Tooth (CMT4B) disease [76]. Overexpression of MTMR2 prevents sustained activation of epidermal growth factor, which leads to sustained AKT activation in transgenic mice [76]. PtdIns(3)P and PtdIns(3,5)P2are important molecules for endosomal-lysosomal membrane trafficking [70], which is tightly regulated by PtdIns kinase and phosphatase activity. MTMs have also been linked to X-linked centronuclear myopathy (XLCNM) 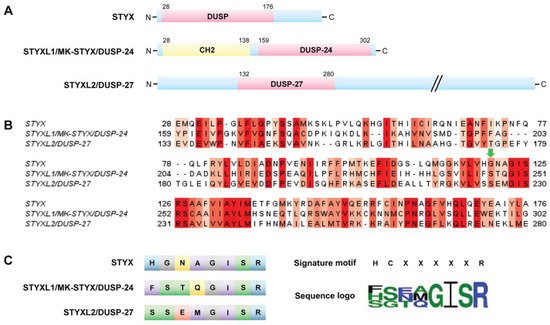 STYX and MK-STYX have been shown to be important signaling regulators in cellular processes such as cell cycle, spermatogenesis, cell-fate decisions, cell migration, ubiquitylation and protein degradation, apoptosis, and neuronal differentiation [25,26,51,52,54,100,101], alluding to their roles in the etiology of various diseases. Furthermore, these STYX pseudophosphatases have roles in cancer such as colorectal, Ewing sarcoma, and hepatocarcinoma [8,28,33]. In addition, STYX promotes oncogenesis in colorectal cancer by inhibiting FBXW7, blocking the degradation of cyclin E and c-Jun Therefore, free (unbound) cyclin E and c-Jun are able to promote proliferation in colorectal cancer. 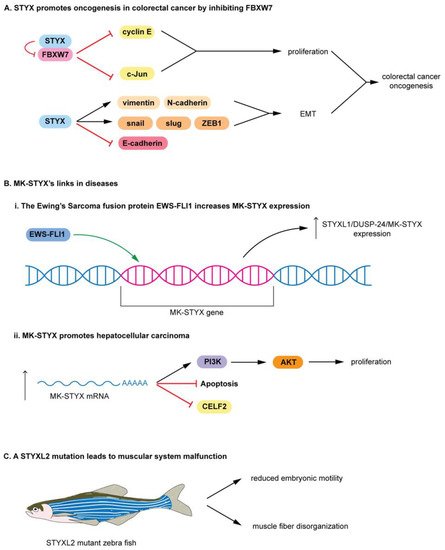