Eight kaolinitic materials from the Lokoundje River at Kribi were sampled and investigated for their physical, chemical, mineralogical and thermal characteristics in order to evaluate their potential suitability as raw materials in ceramics. The Lokoundje kaolinitic materials are clayey to silty clayey and are predominantly composed of kaolinite and quartz. The alkali (Na2O + K2O) content ranges between 1 and 2.5 wt.%; these low values do not favor vitrification of the ceramics but may be improved through flux amendment. The presence of goethite in some samples limits their utilization in white ceramics. The minerals content, color, metallic sound, cohesion, linear shrinkage, flexural strength, bulk density, water absorption and microstructure were determined. The XRD data reveal that kaolinite and goethite were transformed, respectively, into mullite and hematite. The colors of the fired products are characteristic of their mineral assemblage. The metallic sound is indicative of low vitrification which is confirmed by the presence of cracks due to low flux contents. The cohesion is good to very good, due to the abundance of kaolinite. The physicomechanical properties increase with temperature as well as densification. The geochemical data show that the Lokoundje alluvial clays are suitable for the manufacture of white stoneware tiles.

The investigation of clays as raw materials for ceramic industry has been a long-standing research activity spanning over many centuries. Clays mineral are used in traditional ceramics for fired bricks, stoneware or porcelain [1,2]. The interest human societies have in clay materials is due to the several varieties of applications [3]. Clay materials are used to promote sustainable development in many countries due to their low cost and availability for use in the building industry [3]. Kaolin occurs as a ubiquitous raw material with many applications, such as filler in paper, plastics, paints, and rubber. In view of promoting the quality used of available clay resources around the world, many studies are being conducted on their valorization in various applications, such as cementitious-product making [4,5], water treatment [6,7,8,9,10], pollution remediation [11,12], earthen ceramic production [13,14,15], and polymer–clay composites [16,17]. The present study focused on the evaluation of the potentiality of alluvial kaolinite from Kribi as a potential raw material for the production of earthen ceramics. The testing of the material from this region is motivated by the deposit size, which may allow a large-scale production if the material properties are favorable. To this end, the chosen samples were subjected to chemical, mineralogical, physical, and textural analyses to determine their properties, as well as performance evaluation of the fired specimens.

The thermal analyses (TGA-DTG) measurements are reported in Figure 5. The thermal analyses show three mass losses: the first loss occurs around 60–66 °C and corresponds to the loss of adsorbed water [25,26,27]. The second mass loss at 241–252 °C is associated with the conversion of goethite into hematite, and the last one at 489–492 °C is related to the dehydroxylation of kaolinite [28]. The goethite to hematite conversions confirm that iron is mainly present in form of goethite and that this will probably lead to a reddish color in the fired sample. The variation in the temperature of the last mass loss (489–492 °C) is associated with the crystallinity difference of the kaolinite [25]. As previously reported, FTIR revealed that kaolinite has a high degree of disorder, characteristic of several alluvial environments [18,29]. The intensity of the dehydroxylation peaks (489–492 °C) is coherent with kaolinite-rich materials and the associated mass loss varied between 14% and 18%; these values are consistent with the theoretical weight loss from the kaolinite ideal formula of 14%. 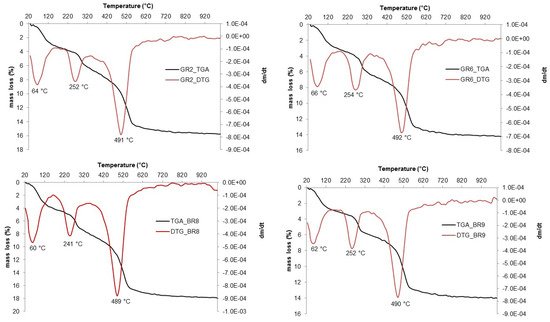 Figure 5. TG-DSC of Lokoundje alluvial materials.
The color of the specimens is variable as a function of the initial color of the raw materials, as well as their mineral compositions. The pale brown sample becomes light red; the light gray becomes dark red or white; and brownish gray becomes pink (Table 3, Figure 6). This is associated with the fact that, during the sintering process, goethite is converted into hematite, which justifies the reddish and brownish colors, as suggested by the thermal analyses. The whitish color is mainly the mark of a sample with low iron content [30]. The sound of the fired products is metallic (Table 3), which is indicative of vitrification that accounts for improved sintering. The cohesion of the fired products is good to very good (Table 3). The weak cohesion of sample BR9 may be related to the proportion of coarse particles. The mineral assemblage of the fired products, from XRD analyses (Figure 7), is made of quartz, mullite, rutile and hematite. Mullite is developed from the spinel phase, which is formed from the demixion of metakaolin that is formed after kaolinite dehydroxylation [31,32]. The illite peak, although low, is still observable in the products fired at 800 °C and 900 °C. Illite dehydroxylation evolved from 300 °C to 700 °C. The relic illite structure breaks down between 700 °C and 850 °C, leading to a liquid phase formation, which crystallizes to form a spinel which crystalizes until it changes to mullite above 1100 °C [33]. In the particular case of these materials, the mullitization peaks, observed from 800 °C, are associated with the structural disorder of the clay minerals present in the raw samples. 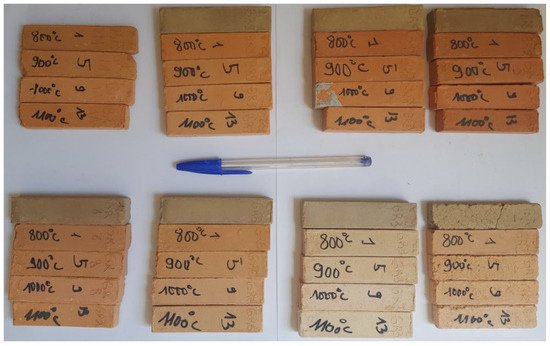 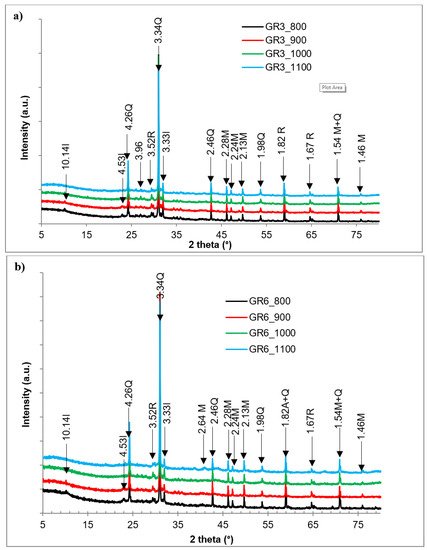 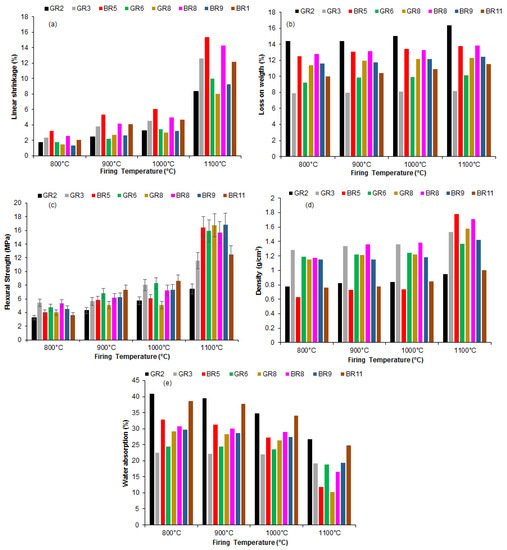 Figure 8. Influence of firing temperature on the physical and mechanical properties of Kribi clays: (a) linear shrinkage; (b) weight loss; (c) flexural strength; (d) bulk density and (e) water adsorption.
The flexural strength increases with the firing temperature because of an increase in densification (Figure 8c). This densification is supported by the XRD patterns, in which an increase in mullite formation with temperature is noticeable. The highest value obtained was 15.75 MPa for sample BR5 fired at 1100 °C. For all other samples, the highest value of flexural strength was reached at 1100 °C (Figure 8c). This can be explained by the high Al2O3 content [34] and/or the increased formation of a dense phase, such as mullite during sintering [35]. The bulk density (Figure 8d) followed the same trend as the flexural strength, which was consistent with the proposed increase in density upon firing, because of dense phase formation. Between 800 and 1000 °C, the bulk density is almost constant. This may be due to the similar mineralogical composition of the samples, in which the main dense phases are quartz and a primary mullite from 1000 °C (Figure 7). The density of the BR5 sample was also the highest among the series. Given that its clay size fraction, from particle size analyses, was the highest (76%) for the GR2 sample, then the mullite formation from sintering was higher in these samples compared to others. The difference reached in the flexural strength was probably due to crystallinity differences, which may affect the kinetics of mullite formation.
The decrease in the water absorption (Figure 8e) is in agreement with the change in the flexural strength and the bulk density as a result of improved sintering. These values were considerably reduced to less than 20% at 1100 °C, except for in two samples (GR-2 and BR-11), probably because of a glassy phase formation that diffuses between the grains, causing pore enclosure. The water absorption was less than 25%, indicating that these clayey materials can be of use for tile manufacturing. At 800 °C, the sintering was not sufficient to improve densification, which explains the high level of water adsorption.

An examination of the microstructure under SEM reveals the presence of several cracks at 1000 °C (Figure 9a–e,g) and rounded pores at 1100 °C (Figure 9f,h). The presence of cracks confirms low densification during sintering at temperatures <1100 °C. The abundance of alumina, the low flux contents, as well as the low Fe2O3 contents (Table 3) can confirm this behavior [36]. Additionally, at 1000 °C, the densification is still poor as mullite formation is still limited (Figure 9a,b). The low densification might also be linked to the low mullite formation. As reported in [37], before 1100 °C, XRD peaks associated to mullite more often account for the spinel that will crystalize as mullite. The mullite needle starts to be observable from 1100 °C; at this temperature, the strength is relatively high. 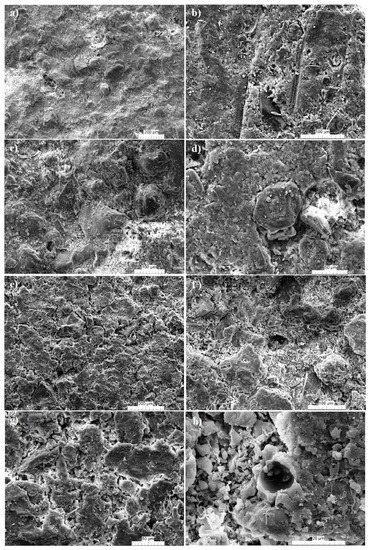