Age-related bone disorders such as osteoporosis or osteoarthritis are a major public health problem due to the functional disability for millions of people worldwide. Furthermore, fractures are associated with a higher degree of morbidity and mortality in the long term, which generates greater financial and health costs. As the world population becomes older, the incidence of this type of disease increases and this effect seems notably greater in those countries that present a more westernized lifestyle. Thus, increased efforts are directed toward reducing risks that need to focus not only on the prevention of bone diseases, but also on the treatment of persons already afflicted. Evidence is accumulating that dietary lipids play an important role in bone health which results relevant to develop effective interventions for prevent bone diseases or alterations, especially in the elderly segment of the population.

Musculoskeletal system is one of the most affected during aging [1]. Age-related bone diseases such as osteoporosis or osteoarthritis are a major public health problem due to the functional disability they generate. In this context, fractures of the hip, spine and wrist have a huge economic and health impact. Furthermore, fractures are associated with a higher degree of morbidity and mortality in the long term, which generates greater financial and health costs [2]. The incidence of fractures is variable between populations. Notwithstanding, this effect will be notably greater in those countries that present a more westernized lifestyle [3]. However, as the world population becomes older, the incidence of this type of disease will increase. Diet and hence nutrition are shown to be useful and modifiable tools for the prevention and management of metabolic bone disorders. 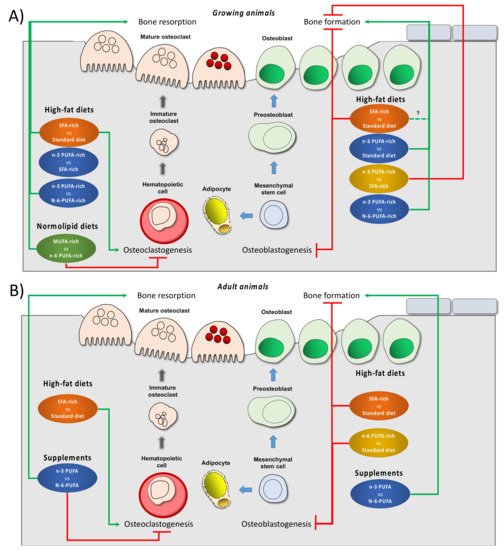 Figure 1. Effect of different dietary interventions concerning dietary fat on bone biology and metabolism reported in growing (A) or adult (B) animal models. The effects refer changes respect than control diet (indicated after the term vs. in any case) which depend on each study design. Dietary interventions have been subdivided in two categories, high fat diet that, in turn, can be rich in different fat types or supplements with specifical fat types. Green arrows indicate induction in the particular process. Red truncated lines indicate a decrease in the particular process. Abbreviations: MUFA: monounsaturated fatty acids; n-3 PUFA: n-3 polyunsaturated fatty acids; n-6 polyunsaturated fatty acids; SFA: saturated fatty acids, vs.: versus.
Despite results found in preclinical studies, only three randomized clinical studies evaluating the effect of nutritional interventions involving dietary fat on bone health were available in PubMed database. Notwithstanding, a search conducted in clinicaltrials.gov database identified a total of nine registered clinical trials on this topic. Main results of the mentioned studies are shown in Table 2. Most of studies addressing the role of HFD or LFD in human bone metabolism was mainly carried out in the context of a hypocaloric diet maintained for a period of one or two years. However, in contrast to animal studies, all these dietary interventions were performed in middle-aged adults and older people. Among these types of interventions, most of the studies found no differences in BMC and BMD as well as in serum bone turnover markers between individuals receiving a HFD and those receiving a standard diet [52][53] or LFD [54]. In contrast, higher BMC and BMD were reported in women consuming a normocaloric LFD (<28%E from fat) respect than those following a standard diet (30%E from fat). Interestingly the last study was initiated in young adults and had a duration of 9 years [55]. The differences between this last one and the previous studies could be also explained because caloric restriction is, by itself, a dietary intervention that has shown a significant reduction of BMC and BMC values in humans with an increase in serum CTX-1 and TRAP and a decrease in b-ALP suggesting that bone resorption was enhanced in detriment of bone formation [56], which could mask the potential role of fat in bone health. Thus, more research evaluating the role of HFD in an isocaloric diet context is necessary.
In the same way, there are 12 additional human studies evaluating dietary lipid role in bone health from a qualitative standpoint. In this context, most of the clinical trials addressing n-3 PUFA supplementation effects on bone biology in older people reported no changes in serum OPG, RANKL, OPG/RANKL ratio, b-ALP, osteocalcin, CTX-1, NTx and calcium levels as well as urinary Pyr, Dpyr and Pyr/Dpyr ratio when they are compared with values obtained in individuals supplemented with n-6 PUFA [57][58], MUFA [59][60] or SFA [61][62]. Indeed, some studies shown a slight reduction of bone turnover markers such NTx and ALP without affect to bone resorption markers (Pyr and Dpyr) between n-3 PUFA supplemented groups and those supplemented with n-6 PUFA [57] or SFA [61]. On the other hand, n-6 PUFA supplementation also did not affect to serum levels of osteocalcin, b-ALP, CTX-1 and calcium as well as urinary NTx, Pyr, Dpyr and calcium excretion levels in comparison with those supplemented with MUFA [63][64] or SFA [57] in a similar age group. Likewise, no differences in BMD, serum calcium, t-ALP, b-ALP, OPG as well as urinary Dpyr and calcium levels were found between extra virgin olive oil (EVOO) (a MUFA-rich fat source) and nut (a n-6 PUFA source) supplementation [65][66][67]. However, a significant post-intervention increases in levels of osteocalcin and P1NP in the supplemented with EVOO, but not in the nut-supplemented one. It should be noted that in most of the reviewed supplementation studies, diet was not controlled beyond supplement, which could increase risk of underestimating the effect of the supplements.
Table 2. Studies in humans investigating the role of fat intake on bone tissue.