Erinaceus europaeus is a cosmopolitan mammalian species broadly distributed in Europe, from natural to suburban areas. Due to its ecological role and susceptibility to distinct zoonotic agents, E. europaeus could be a suitable sentinel candidate for many global problems that negatively affect human and animal health. Hedgehogs can work as bioindicators to environmental contamination and can be hosts for multiple tickborne zoonotic agents.

Erinaceus europaeus, also known as the European hedgehog or western-European hedgehog, classified under “Least Concern” by the International Union Conservation of Nature (IUCN), is broadly distributed in continental Europe (including Russia) [1]. It is also present on some Mediterranean islands, the Azores, and New Zealand [2]. Hedgehog habitats are very diverse, from very natural spaces to rural and urban areas. Though they usually prefer areas with rich food supply and large amounts of vegetation, they have recently been found in high densities in green city parks, which demonstrates their adaptability and resilience [3].

Hedgehogs are hibernators, mainly nocturnal, and insectivorous. Visually, they are known for their spines and back muscles, which allow them to roll up. Their diet is primarily composed of earthworms, caterpillars, slugs, earwigs, millipedes, and beetles. Very rarely, they may also eat mice, snakes, small birds, bird eggs, and pet food found in private gardens [4].

Wildlife disease surveillance represents a crucial tool to achieve One Health principles and prevents us from the remarkable consequences of an epidemic or pandemic disease in the human population. The Ebola virus epidemic and the SARS-CoV2 pandemic perfectly illustrate how important it is to improve the basic knowledge of wildlife infectious agents and threats to prevent a world catastrophe. In fact, most emerging infectious diseases are zoonotic (which means they affect humans and at least one other vertebrate species). Zoonoses result in thousands of human deaths per year [5], not to mention economic losses, making the overall consequences of a single outbreak extraordinary. Prevention and early control of disease outbreaks and environmental changes could be the keys to reduce the impact of these situations, which requires transdisciplinary research approaches [6].

Some interactions between hedgehogs, zoonotic agents, and environmental conditions are illustrated in Figure 1. 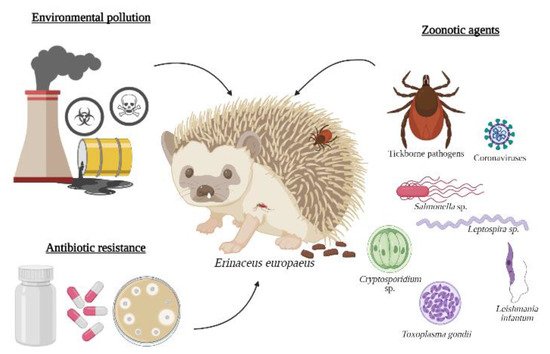 Hedgehogs are considered by some as “melting pots” for tickborne zoonoses [7]. Lyme borreliosis is one of the most common vector-borne zoonotic diseases in Europe, caused by the Borrelia burgdorferi sensu latum (s.l.) complex and transmitted by Ixodes ricinus and I. hexagonus. Improving knowledge about the cycle of these pathogens between ticks and their vertebrate hosts is epidemiologically relevant. Some authors suggest that hedgehogs influence the epidemiology of some species of the B. burgdorferi s.l., affecting their abundance and distribution in distinct habitats. The younger and immunocompromised are the most important reservoirs for B. afzelii, B. spielmanii, and B. bavariensis [8][9]. Another pathogen transmitted by I. ricinus is Anaplasma phagocytophilum. This pathogen is responsible for granulocytic anaplasmosis in horses, dogs, and humans and tickborne fever in ruminants [10]. In Hungary, a survey that analysed the ticks of road-killed hedgehogs showed a prevalence of 74% A. phagocytophilum, 26% B. burgdorferi s.l., and 52% Rickettsia helvetica [11], even though they might not be representative of the population. Furthermore, in Switzerland, tickborne encephalitis virus (TBEV) antibodies were detected for the first time in a European hedgehog. TBEV antibodies and virus RNA were detected in the same individual, which means that the European hedgehog is a suitable host for the disease and leads to the reasonable assumption that it is a reservoir. However, its occurrence at the population level is not known [12].

Salmonellosis is a complex of some of the most common zoonotic diseases worldwide, whose nomenclature is often complex due to the variety of species, subspecies, and phage types [13]. On the European continent, E. europaeus have been reported with different phages of Salmonella enteritidis as well as with S. typhimurium and S. kottbus. The prevalence of infection is generally low (3–4%), particularly when determined by fecal samples or rectal swabs. Nevertheless, in feeding areas shared with humans and birds, this value increases substantially (71%), possibly due to cross-contamination [14]. In Norway, some outbreaks and sporadic human cases were investigated, and salmonella-infected hedgehogs and birds were proposed as a primary source of infection in some of them [15]. Hedgehogs, which are normally asymptomatic, can also carry these bacteria in their coat and spines and can get infected through the ingestion of contaminated food, such as beetles or maggots, easily spreading it in the environment. High mortalities in recovery centers are normally restricted to immunosuppressed or young individuals, who can show clinical signs of enteritis, hepatitis, or peritonitis, and whose differential diagnosis could include Klebsiella sp., Yersinia pseudotuberculosis, and coccidiosis, all of which are zoonotic [14].

Leptospirosis is a clinically relevant zoonotic disease, caused by spirochete bacteria. In France, some species, namely hedgehogs and mustelids, were investigated as carriers of leptospirosis. In this study, hedgehogs were considered as a potential reservoir for L. interrogans Australis [16]. In Azores, where leptospirosis is already recognized in humans and in bovines, several insectivorous species, including the E. europaeus, have been identified as reservoir hosts. On São Miguel island, the hedgehog seems to carry L. serovar copenhageni (from the Icterohaemorrhagiae group). In contrast, in New Zealand, where hedgehogs were also positive for this disease, the reported serovar is ballum [17][18].

Furthermore, in one study, 5 out of 26 E. europaeus brain tissue samples (19.2%) were positive for Toxoplasma gondii [19]. Although not showing high prevalence in hedgehogs, Cryptosporidium parvum, a zoonotic coccidian parasite, was already detected in hedgehogs, in places such as Great Britain [20] and the Netherlands [21]. In the same way, Giardia sp., a flagellated protozoan parasite responsible for a considerable number of human cases of enteritis worldwide, had already been detected in hedgehogs, at least in the Netherlands [21] and New Zealand [22]. Moreover, in 2013, in northern Spain, Leishmania infantum was identified in the European hedgehog for the first time, adding to the list of wildlife reservoirs for this disease that affects humans and domestic dogs [23].

Coronaviruses can affect a variety of animal species and usually cause respiratory, enteric, or neurological diseases. Over the last two decades, it has become more than clear that potentially zoonotic betacoronaviruses can represent massive public health threats, such as those related to Middle East respiratory syndrome coronavirus (MERS-CoV), or more recently and globally with severe acute respiratory syndrome coronavirus (SARS-CoV-2). Recent findings of MERS-related CoVs in hedgehogs from Germany [24], France [25], and Great Britain [26] suggest that E. europaeus represents a wild reservoir of betacoronaviruses named as Erinaceus CoVs (EriCoVs) [27][28]. In 2020, a study that analysed virological and epidemiological data of COVID-19 outbreaks in Wuhan, China, comparing it with SARS-2002 and MERS-2012 outbreaks concluded that, among other findings, the responsible agent was genetically close to SARS-related viruses isolated from bats. However, an additional reservoir of the virus could work as an intermediate host, perpetuating and helping to spread the disease. The geographical distribution and usual eating habits of the hedgehog make this species an improbable candidate to this role, even though it is mentioned by the authors [29]. Moreover, genomic, structural, biological, antigenic, and pathogenic properties were detected between hedgehog (and other mammalian species) hepatoviruses and the human hepatitis A virus, suggesting a common evolutionary origin [30].

In addition to measuring the level of pollutants in soil or water, biomonitoring animal species is helpful to quantify the amount of hazardous substances that the animal has been exposed to, to determine how much has been absorbed, to predict and describe the consequent organic lesions, and eventually, to develop exposure mitigation strategies. Different studies have been performed to analyse the organs of European hedgehogs, namely the blood, liver, kidneys, hair, and spines for trace elements and organic pollutants (such as organochlorines and organobromines). While hair and spines can be used to evaluate exposure, internal organs and blood may provide information on its distribution, accumulation, and induced damages [31][32][33][34].

Hedgehogs tend to have higher levels of lead (Pb) than omnivores or herbivores due to the consumption of insects and earthworms, which bioaccumulate notably high levels of Pb and, consequently, represent a potential way of perpetuating Pb in distinct food chains [35]. Moreover, they usually occupy areas with a high level of urbanisation, where this compound is more frequently present [36]. In contrast, in more natural and unpolluted areas, the amount of heavy metals and metalloids found in hedgehog organs is usually lower and strongly related with the individual age of the hedgehog, which is directly linked with exposure time [37].

Traditionally, the rodenticide poisoning cases in wildlife were only attributed to the ingestion of contaminated rodent carcasses. However, significant detections of brodifacoum, bromadiolone, and difenacoum in urban hedgehogs may suggest other sources of contamination since the ingestion of rodents by hedgehogs is not common. Explanations for these results include the use of rodenticides in urban areas, leading to hedgehog exposure and ingestion of sub-lethal levels in baiting stations [38].

When bacteria selectively change in response to the use of antibiotic drugs, they become antibiotic-resistant. Consequently, those antibiotics are no longer effective to treat the same bacterial infections, as they were in the past [39]. Antibiotic resistance is a critical worldwide problem that is becoming increasingly prevalent among wildlife studies. The presence of bacteria carrying genes for antimicrobial resistance in wildlife is an indicator that a problem of human and domestic species origin has spread to wild environments and has become global. Furthermore, it represents an additional One Health challenge since wild animals could act as effective reservoirs and links between environments, humans, and domestic animals. Consequently, hedgehogs not only indicate that this worldwide problem is happening, but indeed represent a reservoir of microbes with antibiotic resistance genes, perpetuating this situation [40][41]. In Germany, other mammalian species, such as the wild boar (Sus scrofa) and roe deer (Capreolus capreolus), have been identified as having the potential to be reservoirs for zoonotic agents and sentinels for threats to One Health [41].