Bacterial meningitis is the most important life-threatening infection of the central nervous system (CNS) with high morbidity and mortality and Escherichia coli is the most common gram-negative pathogenic bacterium causing this outcome [1]. Most bacterial meningitis develops from bacterial penetration of the BBB [2]. Vascular endothelium constitutes the structural and functional basis of the BBB and plays an important role in maintaining the integrity of the BBB, as well as CNS homeostasis [3]. BMECs are characterized by the presence of tight junction proteins (TJs), including Claudins, Occludin and zonula-occludens [4][5]. BMECs dysfunction is often caused by the decrease or re-distribution of these TJs, which lead to disruption of the BBB [6]. Thus, protecting and maintaining the BBB function is of positive significance in alleviating brain damage after the CNS-invading pathogens infection.
LncRNAs are considered regulators of diverse biological processes, including imprinting control, cell differentiation and development [7][8][9], as well as many pathological processes, such as cancer, chronic inflammation and infectious diseases [10][11][12]. Aberrant expression and mutations of lncRNAs uncovered in various brain dysfunctions have led researchers to investigate the potential roles of lncRNAs in brain physiology and pathology [13]. For example, lncRNAs MALAT1 GAS5 and NEAT1 are widely recognized to be implicated in cancer, vascular diseases and neurological disorders [14][15][16][17]. MALAT1 was reported to promote the BMEC autophagy; NEAT1 was able to activate the NF-κB signaling pathway in nerve cells [17][18]. Regarding lncRNAs, the competing endogenous RNA (ceRNA) working mechanism has been largely evidenced, in which lncRNAs act as the ceRNA to interact competitively with miRNAs and regulate the expression of the target proteins [19]. Our previous lncRNA transcriptomics sequencing identified a batch of significantly different lncRNAs in hBMECs upon meningitic E. coli infection [20] and we further noticed one novel lncRNA, lncRSPH9-4, that was significantly up-regulated along with the infection. We focused on this lncRNA because we found that overexpressing lncRSPH9-4 in hBMECs would cause a decrease of the impedance values. However, the specific working mechanism of this lncRNA in the pathogenic process is unclear. A variety of miRNAs have been reported to regulate the integrity of the BBB, such as miR-18a, miR-338-3p and miR-182 [13][21][22]. 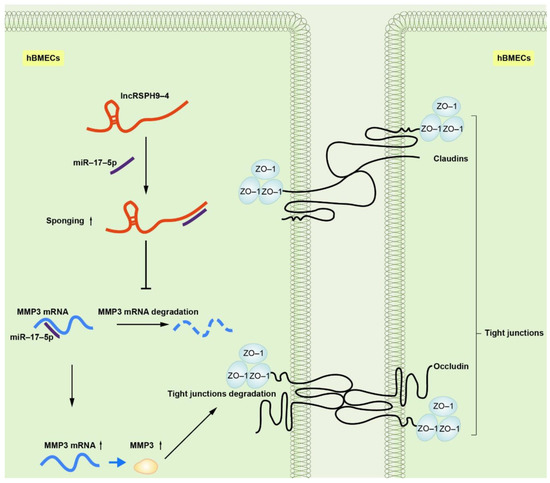 Figure 1. Schematic of the working mechanism of lncRSPH9-4 in the regulation of the endothelial barrier disruption. Meningitic E. coli infection of hBMECs induced the up-regulation of lncRSPH9-4, which could sponge miR-17-5p and thus increase the expression of MMP3 in hBMECs and finally lead to the tight junction degradation.

We demonstrated that meningitic E. coli infection of hBMECs induced the significant upregulation of lncRSPH9-4, which facilitated the barrier disruption of the endothelial cells, probably through lncRSPH9-4/miR-17-5p/MMP3 axis. This finding provides a new idea for understanding the function of lncRNAs in bacterial infection, especially in bacterial penetration of the CNS. Blocking these lncRNAs, such as lncRSPH9-4, may also represent a new strategy to better prevent and improve the CNS dysfunctions.