Endoscopic submucosal dissection (ESD) is considered superior to endoscopic mucosal resection as an endoscopic resection because of its higher en bloc resection rate, but it is more difficult to perform. As ESD techniques have become more common, and the range of treatment by ESD has expanded, the number of possible complications has also increased, and endoscopists need to manage them.

Endoscopic submucosal dissection (ESD) is a form of endoscopic resection that originated in Japan as a treatment for early-stage gastric cancer [1]. Today, ESD has become an accepted treatment not only in Japan but also in other Asian countries and around the world [2]. Its treatment targets are not limited to gastric cancer but also include esophageal cancer, colorectal cancer, pharyngeal cancer, and duodenal cancer. Precancerous lesions and early stage cancers of the gastrointestinal tract that are unlikely to metastasize to the lymph nodes, regardless of the organ, are targeted for ESD. It may also be used to treat residual or recurrent disease. Although ESD is considered superior to conventional endoscopic mucosal resection (EMR) in terms of its high en bloc resection rate, it is more difficult to perform than EMR and requires more delicate endoscopic techniques [3][4].

We identified studies through a literature search of the database (PubMed), with the last search performed on 31 May 2021. The key words were “endoscopic submucosal dissection” OR “ESD” AND “complication” OR “postoperative bleeding” OR ”traction” OR “perforation” OR “stenosis” OR “training”. We restricted the studies to those written in English.

Postoperative hemorrhage is one of the most serious complications associated with ESD. In esophageal and colorectal ESD, the incidence of bleeding after ESD is low, and there are few cases of shock [5]. In addition, patients on dialysis and patients taking antithrombotic drugs are known to have an increased risk of postoperative bleeding [6]. Methods to manage bleeding include drug administration, treatment of the ulcer base, and devising a response to antithrombotic agents.

As maintaining an intragastric pH higher than 5.4 promotes blood coagulation and platelet aggregation [7], administration of proton pump inhibitors (PPIs) or histamine H2 receptor antagonists (RAs) is expected to prevent postoperative bleeding in gastric ESD, as in cases of peptic ulcer. In fact, PPIs have been shown to be more effective in reducing the risk of post-ESD bleeding than H2 RAs [8][9] and are therefore widely used postoperatively. Furthermore, potassium-competitive acid blockers (P-CAB), which have been introduced recently, inhibit gastric acid secretion more potently and rapidly than PPIs [10], suggesting that they may inhibit postoperative hemorrhage more effectively than PPIs [11]. It has been suggested that PPIs may be useful for prophylaxis in esophageal ESD, although not to the same extent as they are in the stomach, but no significant evidence has been obtained [12].

There are many reports that suturing and covering post-ESD ulcers are useful for reducing postoperative bleeding. Suturing has been reported to reduce postoperative bleeding in gastric EMR [13], colorectal ESD [14], and duodenal ESD [15], but there has also been a report that it did not significantly reduce postoperative bleeding in colorectal ESD [10]. Thus, each facility employs it following its own guidelines. In addition to the conventional method using a hemostatic clip [16], there are also methods that use an indwelling snare [17], an overstitch (Apollo Endosurgery., Austin, TX, USA) [18], an over-the-scope clip (OTSC Ovesco Endoscopy GmbH, Tuebingen, Germany) [19], and, more recently, endoscopic hand suturing [20]. Polyglycolic acid (PGA) sheets are often used to cover the ulcer base with a special material after ESD, and they have been reported to be useful even in patients taking antithrombotic drugs [21][22].

Perforation in esophageal ESD may lead to mediastinitis, and perforation in gastric and colorectal ESD may lead to peritonitis, which may be fatal in some cases. The incidence of perforation in esophageal, gastric, and colorectal ESD is 3.2% [23], 2.9% [24], and 4.8% [25], respectively. To avoid intraoperative perforation, it is important to obtain a good intraoperative field of view and to reliably visualize the muscularis propria. The traction method has been reported to be useful in many such cases [26]. The clip-with-line and S-O clip methods are the main methods used.

The clip-with-line method is a simple method proposed by Oyama et al. [27]. After the flap is formed, the endoscope is removed, and a silk line or dental floss is tied to the arm of a conventional hemostatic clip outside the body. The scope is reinserted, and the clip is attached to the flap. In this step, it is necessary to avoid accidental entrapment of the muscularis propria, and the thread attached to the flap can be pulled from outside the body with a small amount of force to ensure a good field of view and reliable visualization of the muscularis propria. The proximal side of the colon is generally not a good indication for this method because of interference with the scope. Reinsertion of the scope is necessary in the original method, but a modified method that does not require reinsertion of the scope has also been reported [28].

However, as S-O clips are not readily available in some countries and regions, the ring-thread counter traction method, in which a loop of thread is attached to the arm of a hemostatic-like clip to obtain traction, is a relatively straightforward method (Figure 1) [29] 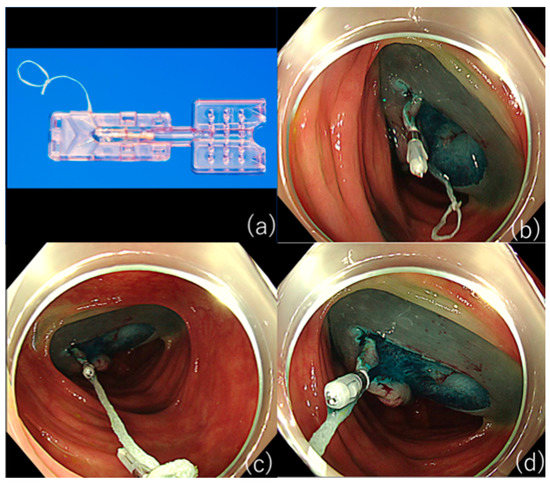 The most important issue in clinical practice is the mechanism involved in post-ESD esophageal stricture, and the existence of a layer of horizontally oriented myofibroblasts directly above the thin intrinsic muscle layer at the site of stricture was first reported in an animal experiment [30]. Thereafter, it has been demonstrated that the same pathological change occurs in the human esophagus where post-ESD esophageal stricture develops and is later removed [31]. Myofibroblasts have been reported to have contractile properties [32], and an increase in the number of contractile myofibroblasts may be the mechanism of stricture. Furthermore, Ohki et al. [33] reported that stricture can be avoided by adjusting a sheet of ex vivo cultured autologous oral cells to the ulcer after ESD. These stenosis prevention methods should be used as appropriate, depending on what is available at each facility.

The use of pig internal organs as a training model has been reported as a method for the acquisition of techniques before endoscopic treatment in actual clinical practice [34][35][36]. While this model is useful for acquiring basic techniques, it is certainly not realistic because of the absence of factors that make ESD difficult in actual clinical practice, such as heart rate and respiratory variability. Therefore, we have successfully developed an animal model with a heartbeat that is more in line with actual clinical practice [37] and used it to teach future clinicians (Figure 2). As the model has a motor devise that rotates at 80 cycle/min (approximately a normal human heart rate) in approximately 30 cm from the incisors of pig organ, we can perform realistic esophageal ESD training (Figure 3). It is also possible to learn about troubleshooting for intraoperative complications using ex vivo animal models. We can practice suturing a perforation intentionally made by an ESD knife with a hemostatic clip. Intraoperative bleeding, which may seem impossible to reproduce, can be reproduced by injecting red ink into the blood vessels of the organ, allowing us to practice hemostasis [38]. While some facilities and regions may have problems, such as unavailability of pig organs and cleaning of scopes used in animal models, we have also begun to conduct ESD training using Versatile Training Tissue (VTT; KOTOBUKI medical, Yashio, Saitama, Japan) made of “konjac”, a food item, which are readily available and do not require special care to clean the scope [39]. 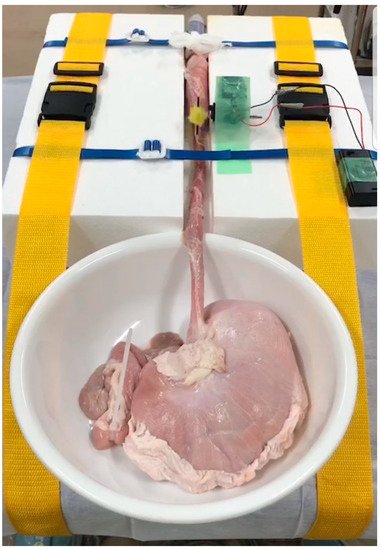 Intraoperative and postoperative hemorrhage, perforation, and postoperative stenosis are critical sequelae associated with ESD, and their prevention and management were presented in detail in this review. There are multiple methods for each of these, and it is necessary to find an appropriate method for each facility. Furthermore, the establishment of training methods for ESD may be a measure to prevent complications in the long term [1].