The production of melanin pigments by melanocytes and their quantity, quality, and distribution play a decisive role in determining human skin, eye, and hair color, and protect the skin from adverse effects of ultraviolet radiation (UVR) and oxidative stress from various environmental pollutants. Melanocytes reside in the basal layer of the interfollicular epidermis and are compensated by melanocyte stem cells in the follicular bulge area. Various stimuli such as eczema, microbial infection, ultraviolet light exposure, mechanical injury, and aging provoke skin inflammation. These acute or chronic inflammatory responses cause inflammatory cytokine production from epidermal keratinocytes as well as dermal fibroblasts and other cells, which in turn stimulate melanocytes, often resulting in skin pigmentation. It is confirmed by some recent studies that several interleukins (ILs) and other inflammatory mediators modulate the proliferation and differentiation of human epidermal melanocytes and also promote or inhibit expression of melanogenesis-related gene expression directly or indirectly, thereby participating in regulation of skin pigmentation. Understanding of mechanisms of skin pigmentation due to inflammation helps to elucidate the relationship between inflammation and skin pigmentation regulation and can guide development of new therapeutic pathways for treating pigmented dermatosis.

Skin color is one of the topmost concerns for human beings as it provides uniformity, identity and represents the overall appearance of a person [1]. Production, quantity, quality, and distribution of melanin, a group of natural pigments, determines the color of human skin, eyes, and hair. It is crucially involved in the defense mechanism to protect skin from adverse effects of ultraviolet radiation (UVR) and oxidative stress of environmental pollutants [2]. Synthesis of melanin starts with formation of melanosomes, melanin-containing organelles, in epidermal melanocytes by a process called melanogenesis [3,4]. Melanocytes are specialized cells derived from unpigmented precursor cells called melanoblasts, originating from embryonic neural crest cells which can migrate towards the skin and other tissues during embryogenesis [5,6,7,8]. Skin pigmentation is a specific and complex mechanism that occurs due to accumulation of melanosomes in keratinocytes to protect skin from solar irradiation. Melanin pigment can be divided into two types—pheomelanin and eumelanin. Pheomelanin has a reddish to brownish color, causing reactive oxygen species production under UVR stimulation. Eumelanin has black color, which works mainly to protect the nucleus from UVR. Skin color differences can emerge from the quantity and quality (pheo/eumelanin ratio) of melanin produced as well as size, number, composition, mode of transfer, distribution, and degradation of melanosomes inside keratinocytes, whereas melanocytes numbers typically remain relatively constant [8]. Keratinocytes have a significant role in regulating adhesion, proliferation, survival, and morphology of melanocytes [8].
There are various nonspecific intrinsic factors (hormonal environment, inflammation) and extrinsic factors (solar irradiation such as ultraviolet irradiation, environmental pollution, drugs) modulating genetically determined melanin levels. Various stimuli including skin eruptions such as eczema, allergens, microbial infection, pathogens, chemical stimuli and physical damage, ultraviolet light exposure, and aging can all lead to skin inflammation [9,10,11,12], defined as a defensive reaction of living tissues with a vascular system in response to exogenous and endogenous stimuli [13]. In dermatology and cosmetology, hyperpigmentation or hypopigmentation after inflammation is a major problem and commonly seen due to acute or chronic inflammatory skin reactions [14]. Inflammatory mediators are chemical factors involved in mediating inflammatory reactions and mainly secreted by T helper cells (Th), monocytes and macrophages, dendritic cells, as well as epidermal keratinocytes. Recent studies have revealed a close relationship between inflammatory cytokines and skin pigmentation. Diversified interleukins (ILs) and varieties of inflammatory mediators can also participate in melanogenesis regulation by modulating proliferation and differentiation of human epidermal melanocytes, and also promote or inhibit melanogenesis-related gene expression directly or indirectly [14,15,16]. Many genes are involved in regulating pigmentation at various levels, as well as mutations in several cause pigmentary disorders.

The regulation of melanogenesis is a complex process and more than 150 genes are involved in this regulation [43]. Melanogenesis can be controlled at different levels as many of these genes affect the developmental process crucial to melanoblasts, while others are involved in melanocyte survival and differentiation [44]. At least 25 of these genes are involved in regulating different pigmentation pathways or function of melanosomes. The cAMP/protein kinase A (PKA) signaling pathway is one of the most significant signaling pathways and the most well-known receptor is the MC1R. MC1R belongs to G protein-coupled receptor family and is expressed predominantly in melanocytes. The α-melanocyte-stimulating hormone (α-MSH) binds to MC1R and activates adenylate cyclase (AC), increasing intracellular concentration of secondary messenger, cAMP. The cAMP activates PKA, then PKA phosphorylates CREB, leading to increased expression of MITF, resulting in melanogenesis promotion [17,28,45,46].
In addition to the above, other signaling pathways such as mitogen-activated protein kinase (MAPK), inositol trisphosphate/diacylglycerol (IP3/DAG), wingless-type protein (WNT), and PKC are reported to participate in the melanogenesis process. The IP3/DAG pathway is activated by the α1 adrenergic receptor (α1AR) and thus increases the intracellular levels of PKC-β and activates tyrosinase [47]. The c-KIT, granulocyte-macrophage colony-stimulating factor receptor (GM-CSFR), and HGF receptor-mediated signaling pathways can be activated by SCF, GM-CSF and HGF, respectively, which leads to autophosphorylation and activation of MAPK, thereby phosphorylating MITF and upregulating melanogenesis-related enzyme expression [3,48,49]. The WNT bind to class frizzled (FZD) receptors and the wingless-type protein (WNT)/FZD signaling pathway is involved in several aspects of the mouse melanocyte physiology, from developmental lineage differentiation to subsequent maintenance of melanocytes [50]. Indeed, pigment development and differentiation from the neural crest cells into melanocytes can be promoted by WNT1 and WNT3A in zebrafish [51]. Several models including mouse Melan-a cells and avian embryo melanocytes have demonstrated WNT1 is responsible for increasing the number of melanoblasts differentiating from melanoblast precursors, whereas WNT3A is involved in promotion of the differentiation of neural crest cells and melanoblasts into melanocytes by maintaining MITF expression [52,53,54]. In general, the WNT signaling pathway can activate the melanocytes-specific MITF isoform (MITF-M) promoter [55,56,57] and upregulate MITF expression, thus participating in melanogenesis regulation. Catecholamines can promote melanogenesis through the cAMP/PKA pathway and also mediate melanogenesis through PKC-β pathways by α1 and β2 adrenergic receptors [3,47].

Allergens, pathogens, chemical stimuli, physical damage, and UVR can all lead to skin inflammation and inflammatory cytokines are predominantly released from immune cells, including monocytes, macrophages, and lymphocytes, which are considered closely related to skin pigmentation [92,93]. Pro- and anti-inflammatory cytokines facilitate and inhibit inflammation. Cytokines modulate immune response to infection or inflammation and regulate inflammation itself via a complex network of interactions. Th1, Th2 and Th17 cells [94] are the main types of Th cells in inflammation. Th1 cells secret cytokines such as interferon-γ (IFN-γ), TNF, and IL-2 and thus play an important role in cellular immune responses and Th2 cells play a central role in humoral immune responses by secreting IL-4, IL-5, IL-10, and IL-13 as well as other cytokines [95,96]. Th17 cells are a recently recognized subpopulation of T cells and produce IL-17, and IL-22, and IFN-γ. Skin samples from atopic dermatitis (AD) patients contain numerous Th17 and Th2 cells, and cytokines produced from these cells (especially Th2 cells), which reduce the epidermis barrier function, elevate trans-epidermal water loss, and increase permeation of environmental irritants and allergens. Antigen-presenting cells (APCs) in the epidermis and Langerhans cells capture allergens with their dendrites extending upwards and process and present them to lymphocytes in the draining lymph nodes, thus stimulate naïve T-cells to be effector memory T cells.
Exposure to sensitized allergens evokes activation and accumulation of effector memory T cells to the exposure site, and these cells are stimulated to produce proinflammatory cytokines into the inflamed area. Atopic dermatitis patients are usually sensitized to food allergens, such as egg, and wheat, or to environmental allergens, such as house dust mites and pollen. These allergens existing everywhere can easily provoke inflammation in barrier-disrupted, easily permeable skin of atopic dermatitis patients. Atopic dirty neck is a well-known pigmentary condition considered to be due to post-inflammatory pigmentation/depigmentation. Th17 secretes IL-17, IL-6, IL-21, and IL-22, which participate in innate and acquired immunity. Psoriasis is another major inflammatory skin disease, where Th17 cells play an inevitable role in its pathogenesis. Treatment with biologics often leaves hypopigmented/hyperpigmented macules in the place of psoriasis plaques, which may be reflected by cytokine profiles in the psoriasis plaques. Treatment with UV (Psolalen-UVA (PUVA) or narrowband UVB) leaves strongly hyperpigmented macules without exception, probably due to the melanogenic function of UV.

Several studies have observed the involvement of local inflammatory factors in skin pigmentation regulation, which are presented in Table 1 (Figure 3). It has been revealed that IL-4 directly takes part in inhibiting melanogenesis in normal human epidermal melanocytes (NHEMs) by downregulating MITF, TYRP1, and TYRP2 expression through the JAK2-STAT6 signaling pathway [16]. IL-4 is mainly produced by Th2 cells. In chronic inflammation, basophils, eosinophils, and mast cells can also secrete IL-4 [97,98]. IL-4 plays a crucial role in IgE generation in hypersensitivity, inflammation induction, autoimmunity [99] and is also involved in the maintenance of Th2 lymphocytes and acts as an autocrine growth factor of differentiated Th2 cells [100]. It is hypothesized that skewed balance to Th1 is directly responsible for vitiligo development by changing IFN-γ/IL-4, Tbet/Gata3 profiles in vitiligo patients compared to controls [101,102]. 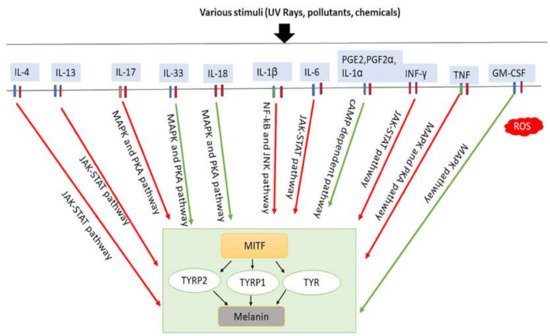