Glasses are solid amorphous materials which transform into liquids upon heating through the glass transition.

Glasses are solid amorphous materials which transform into liquids upon heating through the glass transition. The International Commission on Glass defines glass as a state of matter, usually produced when a viscous molten material is cooled rapidly to below its glass transition temperature, with insufficient time for a regular crystal lattice to form [1]. The solid-like behaviour of glasses is separated from the liquid-like behaviour at higher temperatures by the glass transition temperature, Tg [2]. The IUPAC Compendium on Chemical Terminology defines glass transition as a second order transition in which a supercooled melt yields, on cooling, a glassy structure[3]. It states that below the glass-transition temperature the physical properties of glasses vary in a manner similar to those of the crystalline phase. Moreover, it is deemed that the bonding structure of glasses has the same symmetry signature in terms of Hausdorff-Besikovitch dimensionality of chemical bonds as for the crystalline materials[4].

Glass is one of the most ancient of all materials known and used by mankind. The natural glass, obsidian, was first used by man thousands of years ago to form knives, arrow tips and jewellery. Manmade glass objects from Mesopotamia have been dated as early as 4,500 BC and from Egypt from 3,000 BC. The high chemical resistance of glass allows it to remain stable in corrosive environments for many thousands and even millions of years. Several glasses are found in nature such as obsidians (volcanic glasses), fulgarites (formed by lightning strikes), tektites found on land in Australasia and associated microtektites from the bottom of the Indian Ocean, moldavites from central Europe, and Libyan Desert glass from western Egypt. Some of these glasses have been in the natural environment for about 300 million years with low alteration rates of less than a millimetre per one million years. For example, the natural glass obsidian is formed when lava erupts from volcanoes and cools rapidly without sufficient time for crystal growth. The composition of a typical California obsidian is (wt%) 75SiO2 13.5Al2O 1.6FeO/Fe2O3 1.4CaO 4.3Na2O 4.5K2O 0.7MnO. Obsidian glass edges can be extremely sharp reaching almost molecular thinness and was known for its ancient use as knives and projectile tips. Tektites are other natural glasses, typically up to a few centimetres in size, which have most probably been formed by the impact of large meteorites on Earth's surface which melted the Earth's surface material resulting on cooling in glass. The age of tektites found in Czech Republic, moldavites of typical composition (75-80)SiO2 (9-12)Al2O (1-3)FeO/Fe2O3 (2-3)CaO 0.3Na2O 3.5K2O, is assessed to be ~15 million years[5].

Glasses are most frequently produced by a melt cooling below its glass transition temperature sufficiently fast to avoid formation of crystalline phases. Glass-forming materials such as dioxides do not require very fast cooling whereas materials prone to crystallization such as metals require a very fast cooling (quenching), for example the first metallic glasses had to be cooled extremely rapidly with rates of the order of 106 K/s to avoid crystallization. Glasses can be formed by several methods[6]:

Glass formation from melts (vitrification) is a matter of bypassing crystallization and formation of glass is easier in more complex systems[7]. Most glasses used in commerce are oxide glasses (Table 1). 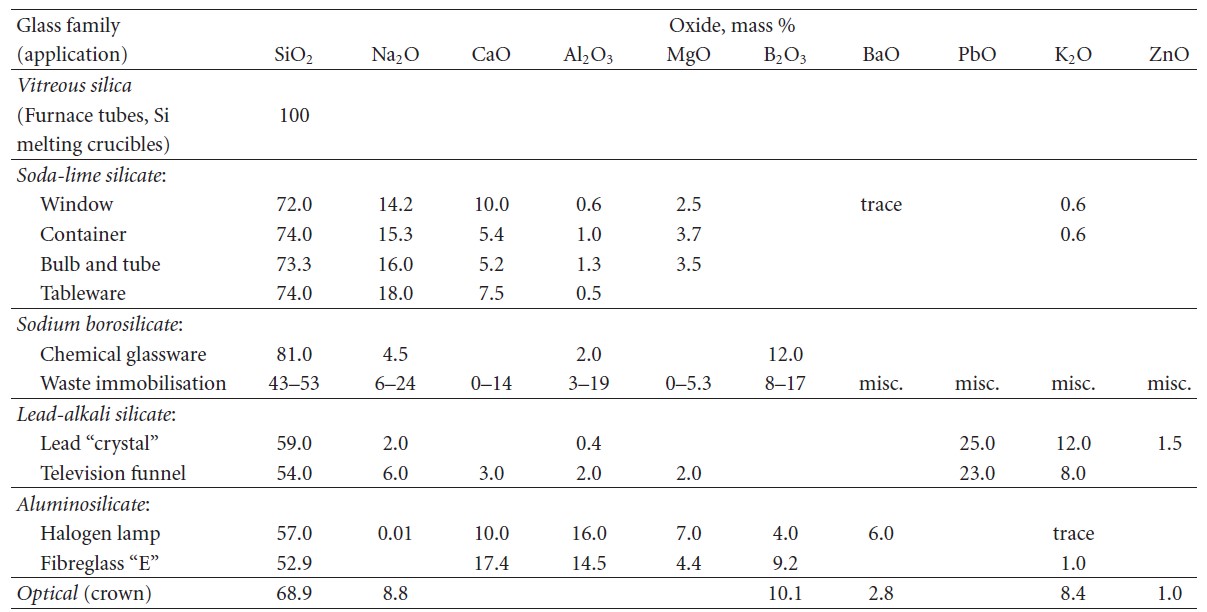 Crystalline materials melt at well defined melting temperatures Tm whereas amorphous materials transform from the glassy (solid) state to the molten (liquid) state at the glass transition temperatures Tg which play the role of melting temperatures of non-crystalline solids. The liquid-glass transition is accompanied by significant changes in physical properties, e.g. glasses are brittle, thus changes should occur at the molecular level although the material at molecular scale is topologically disordered both in liquid and glassy states. Namely rearrangements that occur in an amorphous material at the glass transition temperature cause characteristic discontinuities of derivative thermodynamic parameters such as the coefficient of thermal expansion or the specific heat[8]. Figure 1 shows the main characteristics of glass–liquid transition that demonstrate the thermodynamic origin and structural changes behind transformation:

(a) The temperature (T) dependences of the isobaric heat capacity (Cp) by differential scanning calorimetry (DSC) during the heating of a glass at a typical rate of 10 K/min. The glass−liquid transition during upscan is always featured by a Cp jump, whereas the vitrification (liquid−glass transition) on cooling during downscan is reflected by a gradual Cp drop[9].

(b) The temperature dependence of the first sharp diffraction minimum (FSDM) value of pair-distribution function (PDFmin) on the scattering of incident neutron or X-rays indicating that at the Tg there is a substantial change of slope due to structural changes at the glass transition[10].

(c) The temperature dependence of the first temperature differential of FSDM value d(PDFmin)/dT indicating that at the Tg, there is a stepwise change of slope due to structural changes at the glass transition[10].

(d) The temperature dependence of the Hausdorff–Besicovitch dimen-sion D=dimH(broken bonds) of the set of broken chemical bonds at the glass transition changes suddenly as change the material properties. The set of broken bonds termed configurons has D = 0 below the Tg, and D = 2.55 ± 0.05 above it[11]. 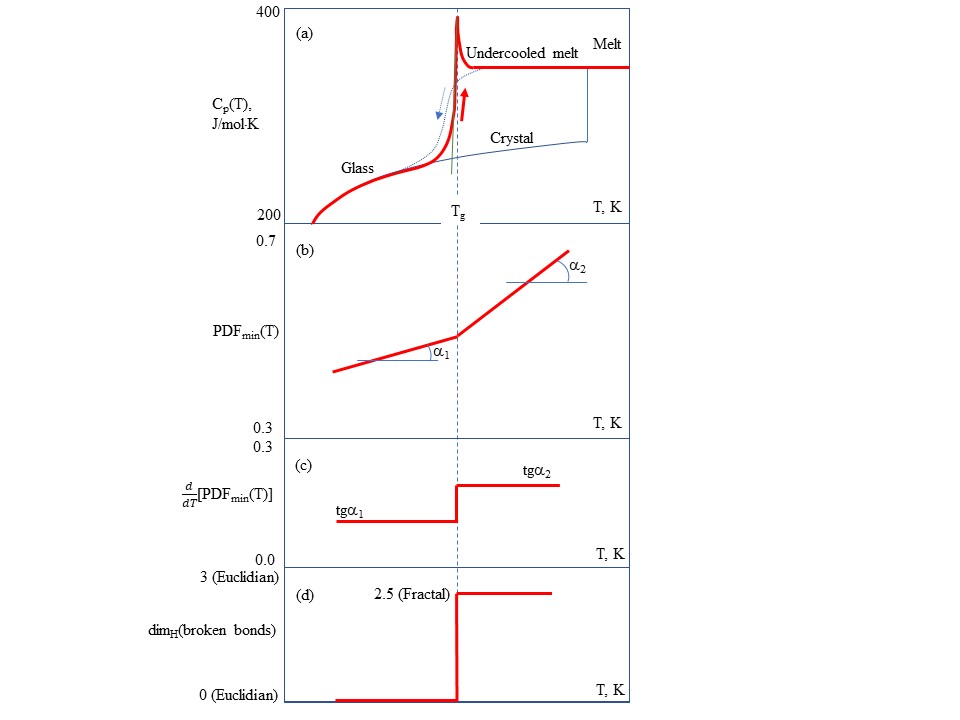 The discontinuities allow to detect the Tg or, accounting for cooling rate dependences, - the glass transition interval where a supercooled liquid transforms to a glass[12]. Vitrification manifests itself as a second-order phase transition however its description in terms of the Landau theory is difficult as there is no clarity about the order parameter describing this transition. Although similar to a second order phase transformation the glass-liquid transition is a kinetically-controlled phenomenon which exhibits a range of Tg depending on the cooling rate with maximal Tg at highest rates of cooling.

The attention of the most of researchers in the last decades has been focused on relaxation aspects of the liquid–glass transition rather than the structure[13]. Emphasis in these works is placed on glass nonergodicity and it is considered that glass is a material characterized by large Deborah numbers for which the relaxation time is much longer than the observation time taken typically as 102 s. The systems are commonly assumed to be ergodic at temperatures T>Tg, whereas the systems are completely frozen with respect to primary relaxation at T<Tg. As on cooling the viscosities of glass-forming liquids continuously increase and achieve very high values, the liquid-glass transition is often regarded as a transition for practical purposes rather than a thermodynamic phase transition. By general agreement it is considered that a liquid on being cooled becomes practically a glass when the viscosity equals 1012 Pa×s (1013 poise) or where the relaxation time is 102 s. There is not any phase transformation at this practical purpose (relaxation) glass transition temperature which is found from the viscosity-temperature relationship: 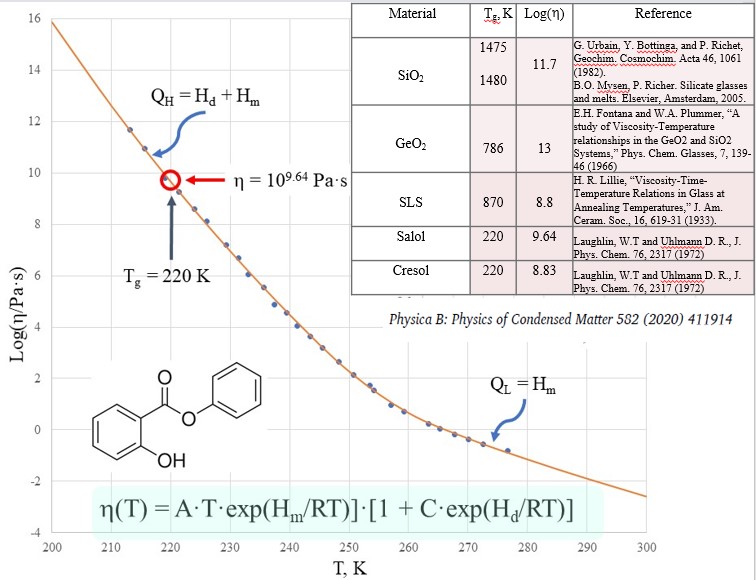 Fig. 2. The viscosity of vitreous and molten salol. The theoretical curve was calculated using the Sheffield equation. The inset shows the viscosities of other amorphous materials at Tg.

Even though a glass like a liquid has a topologically disordered structure, at the same time, it has elastic properties of an isotropic solid. Changes occur at the molecular level on vitrification although the material is topologically disordered both in liquid and glassy states. The drastic changes of materials properties at the glass transition make the structural changes of a vitrifying liquid extremely difficult to reveal directly. This became possible on utilizing sophisticated atomic force microscopy (AFM) techniques[15], analysis of fifth-order susceptibility[16], and analysis of X-ray pair distribution function[10]. The structural difference between crystals, glasses and melts is schematically explained by Fig. 3. 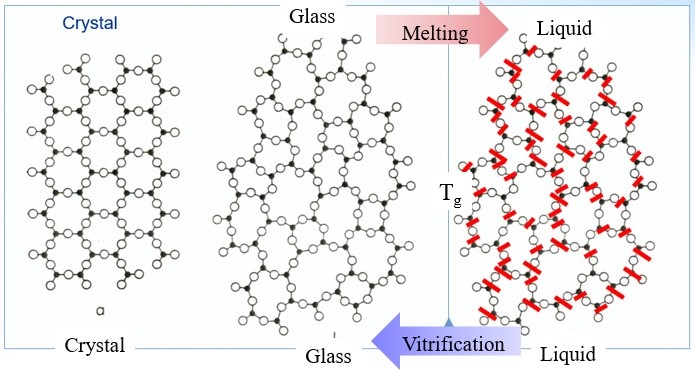 The structural difference between crystals and glasses is obvious both for atoms and bonds – crystals are regular structures whereas glasses are topologically disordered. The difference between glasses and melts are revealed only for bonds: both glasses and liquids are disordered however glasses have broken bonds only as point-like defects whereas in liquids they form macroscopical percolating structures.

where Hd and Sd are the enthalpy and entropy of configuron (broken bond) formation, fc is the percolation threshold which determines when the first time a percolation cluster made of broken bonds – configurons – is formed[4].

Glasses are typically formed on enough rapid cooling of molten materials therefore, following Michael Faraday, the glass can be defined as a solid solution of different substances one in another. Glasses are also formed and occur naturally for example volcanic glasses such as obsidians. Glasses are irreplaceable in the day-by-day life with important technological, medical and scientific applications including physics, chemistry, biology, geology as well as artistic and decorative uses. The most important applications of glasses are well overviewed in the recently published Encyclopedia of Glass Science, Technology, History, and Culture. These include: Glazes and enamels[17], Flat glass[18], Optical glasses[19], and optical fibers[20], Thermal insulation[21], Architecture (buildings)[22], Solar energy harvesting[23], Dental[24] and biological applications[25], Pharmaceutics[26], Screens and displays[27], Lighting[28], Optoelectronics[29], Bulk metallic glasses[30], Nuclear waste vitrification[31] and Immobilisation of municipal and industrial waste[32].

Amorphous materials are largely spread in the nature including glasses. The analysis of bonding system of glassy and crystalline materials shows that they both hold the same Hausdorff-Bezicovitch dimension of bonds. The similarity in bonding of both glassy and crystalline materials result in the similarity of their mechanical behaviour. Amorphous materials are liquid above the glass transition temperature. Transitions in disordered media from the glassy to the liquid state are universal and result from changes which occur in the bonding system. Because of that the configuron percolation theory of glass transition can be used to provide insights on embrittlement of materials composed of microcrystals at low temperatures as well as on such natural phenomena as quicksand formation. In all such cases formation of additional bonds between elementary particles which constitute the material such as microcrystals or sand grains leads to their solid-like behaviour at lower temperatures or denser packing.