Two-dimensional (2D) materials are defined as crystalline materials consisting of single- or few-layer atoms, in which the in-plane interatomic interactions are much stronger than those along the stacking direction. Since the success of monolayer graphene exfoliation, 2D materials have been extensively studied due to their unique structures and unprecedented properties. Among these fascinating studies, the most predominant focus has been on their atomic structures, defects, and mechanical behaviors and properties, which serve as the basis for the practical applications of 2D materials.

Two-dimensional (2D) materials are defined as crystalline materials consisting of single- or few-layer atoms, in which the in-plane interatomic interactions are much stronger than those along the stacking direction. Since the first exfoliation of single-layer graphene [1], 2D materials have attracted worldwide attention due to their unique structures and remarkable properties [2,3,4,5,6,7]. For example, graphene composed of hexagonally arranged sp2 hybridized atoms possesses extraordinary strength [8], giant carrier mobility [9], extremely high thermal conductivity [10], and excellent optical properties [11,12] compared to the existing materials. These exceptional properties and single-atomic-layer structures enable graphene to have a wide range of applications in field-effect transistors [13,14,15], flexible electronics [16,17], photodetectors [18,19,20,21], composite materials [22], energy storage [23,24,25], precise sensors [26,27,28], DNA sequencing [29,30,31] and drug delivery [32,33,34].

The rapid and prosperous development of graphene stimulates numerous research interests on other 2D materials. More than one thousand structures of 2D materials have been predicted to be easily exfoliated to monolayers or multilayers with fascinating physical properties, forming a large family of 2D materials [35]. The booming synthetic methods established from graphene have brought experimental realizations of dozens of novel 2D crystals. Monolayer MoS2 [36] and hexagonal boron nitride (h-BN) [37,38] have been extracted at an early stage and have recently received much attention. Some graphene analogs such as black phosphorene [39], borophene [40,41], silicene [42,43], germanane [44], stanene [45], antimonene [46], bismuthene [47,48] and tellurene [49] have been synthesized in the past few years. Although these 2D materials have an atomic layer structure similar to that of graphene, their physical properties are distinct from those of graphene. Thus, these 2D materials can act as complementary materials and have the potential for broader applications. For example, unlike graphene, phosphorene has a strong in-plane structural anisotropy, leading to a significant dependence of the material properties on its orientation [39,50]. For electronic properties, graphene has a direct zero band gap and exhibits a certain metallicity. Other 2D crystals have a large variety of band structures. The direct band gaps of h-BN [51], MoS2 [52,53,54], and WSe2 [55] allow them to be promising materials for optical devices, transistors, phototransistors, and photodetectors. The metallic electronic character possessed by borophene [56,57] and VS2 [58] is essential for electronic and energy storage applications. In addition, stanene, as a 2D topological insulator, is theoretically predicted to display superconductivity at the edges [59]. A large number of 2D material family members could satisfy variant requirements for a huge diversity of applications. The structure and mechanics of 2D materials play important roles in manufacturing, integration, and performance for their potential applications.

During the synthesis of 2D materials, various types of defects are inevitably generated. For example, during the chemical vapor deposition (CVD) process for the large-area growth of graphene, many isolated grains from different nucleation sites stitch into uniform structures, leading to the formation of grain boundaries (GBs) between neighboring grains with a misorientation [60,61]. Furthermore, graphene’s irradiation or chemical treatment can generate various point defects, such as dislocations, vacancies, and functionalized groups [62,63,64]. The majority of experimental studies have shown that these defects in 2D crystals significantly affect their physical, chemical, and mechanical properties [65,66]. In particular, it has been demonstrated that defects can tailor the properties of 2D materials via the controlled arrangement of defects [65,66]. Therefore, the concepts of defect engineering and topological design have emerged and been used to achieve tunable properties of 2D materials.

The 2D material family has extended to more than one thousand members based on theoretical predictions [35]. To date, tens of these materials have been synthesized experimentally [35]. Generally, 2D materials can be categorized into four types (including graphene family, Xenes, chalcogenides, and 2D oxides) according to their components and atomic structures, as shown in Figure 1.

The graphene family contains graphene and its derivatives consisting of different hybridized carbon atoms or heterogeneous elements, as illustrated by Figure 1a–g. In fluoro-graphene, chloro-graphene, and graphene oxide, the saturated carbon atoms (sp3 hybridization) bind with noncarbon elements, forming an alternating pattern. Carbon allotropes (such as graphyne) are constructed by the network of sp- and sp2-hybridized carbon atoms. The graphyne structure can be regarded as replacing partial aromatic C–C bonds in graphene with acetylene chains. Complete, 2/3, 1/3 and 5/12 replacements result in α-, β-, γ- and 6,6,12-graphyne, respectively (Figure 1c) [67,68]. Graphyne structures exhibit fascinating semiconducting properties, enabling their use in electronic devices [69,70]. These structures are also thought to be possible candidates in gas separation, filtration, and water desalination because of their intrinsic nanopores [69,70]. Analogous to graphene, two or more elements can substitute the original carbon atoms to form more complex layered systems, such as h-BN (Figure 1d), boron–carbon–nitrogen (BCN) (Figure 1e) [71], and SixC1−x (Figure 1f) [72]. In addition to the analogous hexagonal structure above, a 2D material with a tetragonal arrangement is also predicted to be considerably stable. The p(pi)–d(pi) bonded TiC (Figure 1g) is buckled into a zigzag line in the side view. Such a distinguished structure endows it with anisotropic properties [73]. 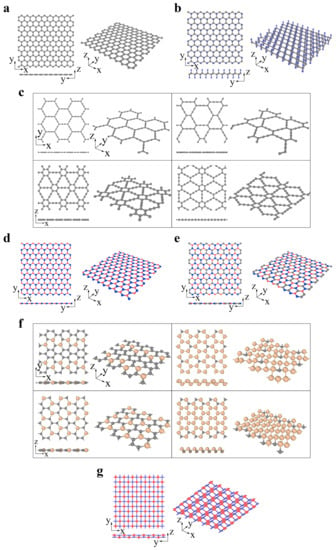 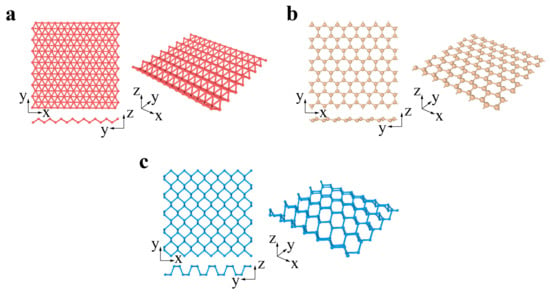 Chalcogenides are a type of emerging 2D material represented by the transitional metal dichalcogenide (TMDC) MX2. For MX2, the layer of transitional metal atom M (Mo, W, Nb, Ta) is sandwiched by two layers of chalcogen atoms X (S, Se, Te). MX2 usually has two typical phases: 2H and 1T phases [75,76,77]. The 2H phases have been widely studied to date. The MX2 (M = Mo, W, Nb, Ta; X = S, Se, Te) in Figure 3a prefers to be the 2H phase in equilibrium, while the MX2 (M = Zr, Hf; X = S, Se) in Figure 3b prefers to be the 1T phase [78,79]. The transformation from 2H to 1T phases can occur under specific conditions [75,76,77]. GaS, GaSe, and InSe are chalcogenides with a double layer of metal intercalated between two layers of chalcogen, forming an X-M-M-X vertical structure (Figure 3c) [80]. Bi2Te3, Bi2Se3, and Sb2Te3 belong to a specific branch of chalcogenides and are called topological insulators. There exists a van der Waals interaction between the stoichiometric monolayers, e.g., quintuple layers (QLs). A Bi2Se3 QL comprises five atomic layers stacked in the sequence of Se (1)-Bi-Se (2)-Bi-Se (1) along the c-axis (Figure 3d) [81]. 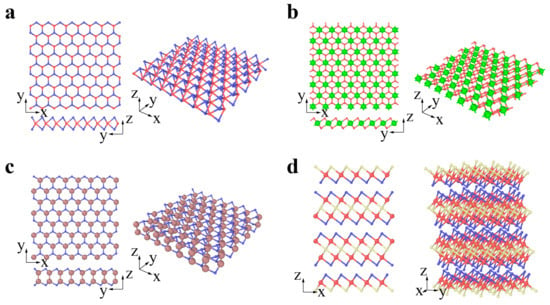