Ceramics derived from organic polymer precursors, which have exceptional mechanical and chemical properties that are stable up to temperatures slightly below 2000 °C, are referred to as polymer-derived ceramics (PDCs).

Conventional Si-based advanced ceramics such as SiC or Si3N4, which are manufactured via the powder route [5], have shown exceptional creep and oxidation resistance up to temperatures exceeding 1000 °C without loss of structure and functionality. However, the extremely high processing temperature of conventional ceramics complicates the production of complex-shaped ceramics, and the brittle nature of ceramics prohibits casting or machining. Although the development of additive manufacturing technologies means that powders can generate complex structures as easily as metals or polymers [6], energy-efficient fabrication of fibers, coatings, films, or ceramic matrix composites (CMCs) from powders is still difficult [5].

The polymer-derived ceramic (PDC) approach is an advanced ceramic manufacturing technique that designs or controls molecular structures of ceramic products at molecular or atomic levels [3]. There has been a rapid increase in PDC-related research, as well as PDCs for high-temperature applications, over last 30 years (Figure 1). PDCs are unique because amorphous ceramics are not achievable via other ceramic synthesis techniques (e.g., powder sintering or chemical vapor deposition) [7]. Polymeric network structures become amorphous microstructures during pyrolysis and form nanodomains of 1–3 nm, which provide good creep and oxidation resistance up to 1500 °C. Thereby, thermodynamically unstable ternary ceramics (e.g., SiCN, SiOC, and BCN) and quaternary ceramics (e.g., SiOCN, SiBCN, and SiAlOC) are achieved and exist as stable microstructures (e.g., free C, SiO2, Si3N4, SiC, BN, Al2O3). The detailed PDC synthesis processes are presented in Figure 2.

Figure 2. Schematics of polymer-derived ceramic processing route. The shaping of the preceramic polymer occurs at the crosslinking stage by thermal crosslinking. Organic to inorganic transition is completed at the thermal pyrolysis stage at elevated temperatures around 1000 °C.

Silicon-based PDCs are produced via thermal pyrolysis of crosslinked organosilicon precursors that may contain light elements such as C, H, O, N, or B at temperatures as high as 1400 °C [8]. Depending on the specific ceramic elemental configuration, some PDCs have high-temperature applications such as coatings, reinforcement, sensors, or matrices [9]. SiCN amorphous ceramics are generally produced from preceramic precursors that contain Si, N, and C via high-temperature (usually ~ 1000 °C) annealing in inert environments. High-temperature (usually > 1100 °C) environments cause the crystallization of amorphous SiCN with microstructures of mixed SiN4-xCx silicon tetrahedrons [9] and segregation into thermodynamically stable crystalline microstructures (e.g., SiC, Si3N4, C, or Si) at higher temperatures [8]. However, excessive carbon leads to the decomposition of ceramic structures at temperatures above 1500 °C (as shown in Figure 3). SiOC PDCs have amorphous microstructures of mixed SiO4-xCx that separate into SiO2, SiC and C at high temperatures and ultimately degrade into SiC and CO gas (> 1300 °C).

Incorporating other elements, such as B [8][10][11][12], Al [13][14][15], Nb [16], Zr [4][17][18], Ti [19][20][21], or Hf [12][22][23][24] in the Si-C-N or Si-O-C systems may greatly enhance the thermostability of ceramic products by preventing or impeding the crystallization and phase segregation of the ceramic phases in inert or oxidizing environments [7]. Initially, at the crosslinking stage, B atoms may improve the formation of the crosslinking network and increase the yield and structural density of SiBOC [11][12]. Upon polymer-to-ceramic conversion, doped elements may form additional phases (e.g., TiO2, HfO2, ZrO2) and lead to nanocomposite-like structures of metal-oxide/amorphous ceramics [25] or dissolve into and alter the amorphous phase (e.g., SiBOC, SiAlOC) which eventually segregate into additional phases (BN, Al2O3) at higher temperatures. At the amorphous stage, the superior stability of the B- or Al-doped amorphous phase significantly enhances the oxidation resistance of SiBOC or SiAlOC ceramics [11][13]. For example, SiAlOC may stay amorphous at much higher temperatures (up to 1400–1500 °C) compared to SiOC phase (crystallize at ~ 1300 °C) [14]. The doped SiOC phase has been shown to impede the diffusion of O2 at high temperatures and inhibit the decomposition of the microstructure [11][15].

After forming additional microstructures, the presence of TiO2, HfO2 or ZrO2 in the amorphous PDC matrix prevent the crystallization and decomposition of the amorphous phase [18][21][24]. Recent work has shown that presence of TiO2 nanocrystals improves the viscosity of the PDC microstructures at elevated temperatures which deters collapse in the TiO2/SiO2 structure [21].

PDC fibers are popular PDC products due to the relentless demand for high-temperature, ceramic-matrix aerospace components [7]. Reinforcing PDC fibers provides strength and structural foundation or shape to the composite, generally in the form of a complex 3D woven structure designed to closely match the final shape of the component [26].

Ji et al. investigated high-temperature antioxidation of amorphous SiBCN fibers, derived from polyborosilazane for aerospace applications[27]. Initial structural characterization suggested amorphous fiber structures of silicon-nitride tetrahedrons (SN3C, SiN4), free carbon, BN hexatomic rings, and BN2C phases (Figure 4a). Crack-free fibers were exposed to air and an imitated combustion environment (with H2O, O2, and N2) at 1400 °C for 2 h. Although subsequent structural investigations indicated well-preserved fiber morphologies with crack-free surfaces and interiors with negligible compositional changes, microstructural changes were captured. Two extra layers formed at the surface of the fibers due to phase separation in which the outermost layer was the SiO2 phase, the intermediate layer consisted primarily of the hexagonal BN phase, and the core was the unaffected amorphous SiBCN structure. The combustion environment produced more crystalline SiO2 in the amorphous SiO2 surface layer than the samples annealed in the air, possibly due to the presence of H2O molecules.

Figure 4. (a) Schematics of SiBCN fiber microstructures (a3) with a detailed illustration of the formation of two additional surface layers after annealing in (a1) air and (a2) imitated combustion environment. (b,d–f) Transmission electron microscopy (TEM) images of fiber cross-section showing different layers. (c) EDS data obtained from the marked area in (b). Reproduced with permission [42]. Copyright 2018, American Chemical Society.

As mentioned, excessive carbon in PDC structures often causes reduced thermal stability of the system due to direct oxidation in air or a reaction with other phases to form crystalline structures. Recent studies on a novel ternary system with only Si, B and N have shown an applicable synthesis of Si-based, carbon-free ceramic fibers from polyborosilanes. Specifically, the ceramics were synthesized from precursors without carbon. For example, Cl3Si-NH-BCl2 can crosslink into oligomers or polymers via polycondensation in NH3, and additional pyrolysis produces C-free SiBN ceramics, which have theoretical thermal stability up to 1700 °C. However, this type of precursor requires handling in a dry inert atmosphere due to hydrolysis reactions of the precursors with moisture. Liu et al. studied the hydrolysis effect of polyborosilazane on SiBN ceramic fibers, demonstrating evidence of the formation of Si-O-Si groups in the precursor (Figure 5) [28]. The incorporated oxygen altered the surface features of pyrolyzed PDC fibers and caused the formation of β-SiO2 at 1400 °C, leading to decreased thermal stability due to early crystallization. 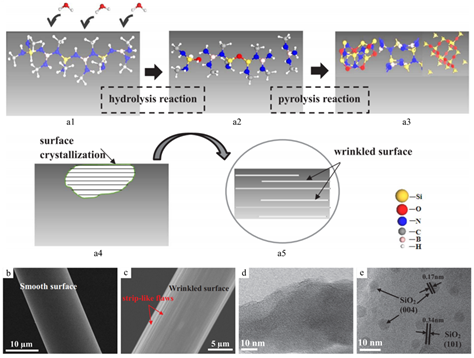 In the early 1990s, Mocaer et al. initially measured the electrical conductivity of SiCNO at a temperature range up to 500 °C, showing a semiconducting feature of PDCs [29]. Later, Ryu et al. measured and confirmed the semiconductive properties of SiCNO PDCs up to 1300 °C without dopants [29]. The band-gap change measured for SiCNO PDCs varied from 2.2 to 0.1 eV as the annealing temperature rose from 1100 to 1400 °C. The results also suggested tweakable semiconductive properties of PDCs by tailoring the elemental compositions. This semiconducting feature of PDCs have founded a new variety of high-temperature semiconducting field and is appealing to other applications, such as sensing or catalyzing. Further electrical characterization of SiCNO PDCs by Terauds et al. exposed significant temperature-dependent piezoresistivity at temperatures up to 1000 °C [30]. Their research identified the dominant (one order of magnitude higher) gauge factors of this PDC over other commercial materials, such as Ge, Si, SiC, or diamond at higher temperature limits, providing an efficient alternative material to high-temperature stress sensors. However, all the electrical properties are manipulatable by controlling the microstructures [31].

As PDC fibers and composites began to be utilized as critical components of advanced applications (e.g., turbine engine for aerospace purposes) in high-temperature environments, the simultaneous controlling and monitoring of high-temperature and harsh working environments became essential [32]. Silicon-based MEMSs have been used in applications such as sensors or actuators, but have demonstrated limited performance due to poor thermal and mechanical stabilities at temperatures above 250 and 600 °C, respectively [54]. SiC, a wide bandgap semiconductor, has also been proposed to overcome working temperature restrictions of Si MEMSs for high-temperature sensing. In addition to an outstanding thermal stability, their superior ant-corrosion, chemical stability and mechanical performance have also attracted wide attention for high-temperature semiconducting applications [33][32]. The shaping process and microscopic features of PDC MEMSs are presented in Figure 6 [34]. However, film-deposition-manufactured SiC is costly to produce and requires extra micromachining, which complicates productions [35]. In comparison, PDC materials have shown great flexibility for MEMS production; the polymer route utilizes micropatterning to allow the shaping of liquid precursors.

SiBCN is a promising high-temperature PDC material that has shown significant advantages over commercial alumina membranes, including ease of manufacturing via a sol-gel process and high thermal stability and resistance to oxidation and phase transformation [10]. Hauser et al. showed the potential of SiBCN as high-temperature separating membranes (Figure 7) [10]. They synthesized ceramic film on an alumina substrate surface by dip-coating the substates into the precursor solution. A thin SiBCN film with a thickness of 2.5 microns was produced on porous alumina, with pore sizes of 0.6–6 nm. This SiBCN, which was PDC-derived from a cyclic preceramic precursor and borane dimethylsulfide, showed high thermal stability at 1400 °C in an oxidizing environment with a mass drop of only 1 wt. % for 50 h, free of crystallization. 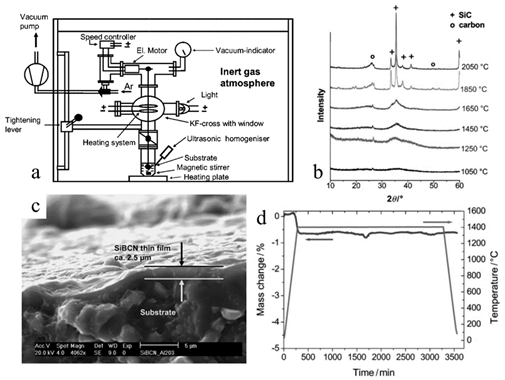 Figure 7. (a) Schematics of coating synthesis setup. (b) XRD of SiBCN PDC at different annealing temperatures, suggesting conversion of amorphous to crystalline at 1850 °C. (c) SEM images of the cross-section of SiBCN membrane on an alumina substrate. (d) TGA of SiBCN at 1400 °C for 50 h in the air [10].