More than ever before, environmental problems have become a major concern. Urbanization and rapid growth of industries generate abundant amounts of pollutants which are released into the environment. Among them, there are highly hazardous materials such as pharmaceuticals [1,2], dioxins [3], pesticides [4], herbicides [1], phenols [4,5], and textile dyes [1,4,5,6]. This increasing occurrence of organic pollutants in the environment is a serious danger for health and the lives of humans and other living beings. Conventional treatment methods very often fail in the removal of these kinds of residues entirely, because of their high (bio)chemical stability. Moreover, a conventional approach is associated with the operational problems and high costs. Hence, the development of new and efficient methods of the removal of organic contaminants is a matter of growing interest [1,2,4].

In recent decades, semiconductor photocatalysis has been proved to be an efficient approach for organic compounds decomposition and degradation. TiO2 has been widely and successfully used as a photocatalyst in many different areas (Figure 1) due to its advantages, such as low cost and good chemical stability. However, it requires employing relatively high photon energy to be activated. For this reason, many methods of narrowing of the band gap of TiO2 have been proposed, aimed at the direct usage of sunlight [7,8]. Amongst them, doping of TiO2 with non-metals such as carbon, nitrogen and sulfur is often reported as one of the most effective ways of increasing its photocatalytic activity under visible light [1,9,10]. Non-metal doping of TiO2 leads to changes in the electronic band structure, resulting in a smaller band gap energy value, and thus an improved response in the visible light [7,8,11]. 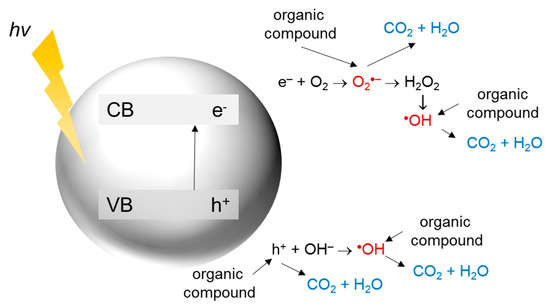 First, the energy higher than the band gap energy of the semiconductor is required for photon absorption and excitation of an electron (e−) from the valence band (VB) to the conduction band (CB), resulting in hole (h+) generation. The holes in the VB can react with the surface adsorbed water or hydroxyl ions to form hydroxyl radicals, which are extremely strong oxidants (oxidation potential around +2.7 V). The photoexcited electrons in the CB can generate superoxide radicals due to the reaction with oxygen, being the main electron acceptor in the system. Further reactions lead to the formation of other reactive oxygen species (ROS) such as hydrogen peroxide, hydroperoxyl radicals, or hydroxyl radicals. These species participate in the degradation of organic contaminants [41,42,43,44].

The effectiveness of the photodegradation of pollutants on the semiconductor surface is influenced by: (i) the chemical composition, structure and concentration of pollutants, (ii) the radiation intensity, (iii) the exposure time, (iv) the amount of photocatalyst used, (v) the oxygen content in the reaction medium, (vi) the pH value of the solution, (vii) the properties of a photocatalyst (specific surface area, crystallographic structure, number of surface defects, presence of additives and dopants, etc.) [45,46].

Reference (Editors will rearrange the references after the entry is submitted)