Lindera, a core genus containing more than 100 species, is a member of the Litseeae tribe under the Lauraceae family. Plants of the Lindera genus are widely distributed all over the world, particularly in the tropical, subtropical and temperate regions of Asia and midwestern America. Plants from the Lindera genus are considered a rich source of essential oils and are often used in the production of aromatic cosmetic products such as soap and lubricants for their elegant fragrance. Most importantly, throughout history, many Lindera plants have been used in traditional medicine for their healing and curing capabilities for several health-related implications, such as pain, cold, urinary tract disorders, rheumatoid arthritis, gastric ulcer, abdominal pain, cholera, and beriberi.

The human body is consistently fighting oxidative attacks from reactive oxygen and nitrogen species (RONS) using a complex antioxidant defence system to maintain the pro-oxidant–antioxidant balance [6]. Imbalance in the cellular antioxidant defence machinery can result from several factors, including ageing and environmental toxins [7]. However, chronic imbalance in the cellular oxidative state may lead to several age- or un-related disorders such as neurodegenerative, cardiovascular, chronic obstructive pulmonary, and chronic kidney diseases as well as cancer [8]. Reactive oxygen participates in the high-energy electron transfer mechanism and the production of adenosine-5-triphosphate (ATP) through oxidative phosphorylation [6]. Imbalance in the production of RONS and antioxidant defence in the cell leads to oxidative stress and attack of many biological molecules such as proteins, lipids, or DNA [8]. Several redox-sensitive transcriptional factors and enzymes such as nuclear factor-erythroid 2-related factor (Nrf-2) and activate antioxidant response element (ARE) have been implicated in maintaining cellular oxidative homeostasis [9][10]. Activation of ARE results in the up-regulation of several antioxidant enzymes, such as heme oxygenase-1 (HO-1), which catalyzes the oxidative degradation of heme into bilirubin and free iron and NAD(P)H quinine oxidoreductase 1 (NQO1); this latter enzyme regulates reactive oxygen species (ROS) generation by reducing quinones to hydroquinones [10]. Therefore, Nrf-2/HO-1/NQO1 are involved in maintaining the balance of oxidative stress, thus protecting cells and tissues from oxidative damage [9][10].

Lindera obtusiloba Blume (LO), a member of the genus Lindera, is widely distributed in northeast Asia. The use of LO as a traditional medicine for the treatment of improvement of blood circulation, inflammation fever, abdominal pain, etc., is well documented. Both extracts of the different parts of LO and its bioactive compounds have been reported to contain numerous antioxidative compounds, such as polyphenols, lignans, neolignans, flavonoids, and butenolides. The neuroprotective, cytotoxic, anti-inflammatory, anti-allergic, and antithrombotic properties of these bioactive compounds have been reported [13][14][15][16]. Therefore, LO presents a rich source of bioactive compounds, particularly antioxidants that have been investigated in many diseases associated with oxidative stress. Still, many new antioxidant compounds are being isolated from the extract of different parts of LO and need to be investigated for their antioxidant and pharmacological activity. Here, we briefly discuss the antioxidant properties of the genus Lindera and focus on their traditional and ethnopharmacological use, bioactive compounds isolated from LO extracts and their antioxidant and pharmacological properties. Newly isolated or detected compounds from LO extracts that could prove beneficial to developing new therapeutic agents to treat oxidative stress-associated disorders such as cardiovascular disorders, neurodegenerative disorders, allergy, inflammation, and cancer.

2. Genus Lindera and Antioxidant Properties of Its Plants

The Lindera genus is part of the family Lauraceae, which is widely distributed in tropical, sub-alpine and temperate regions of the Asian and American continents, with approximately 80 to 100 species [24][25]. Among them, Lindera aggregata (Sims) Kosterm, Lindera glauca (Siebold et Zucc.) Blume, Lindera neesiana (Wall. ex Nees) Kurz, Lindera pulcherrima (Nees) Hook. F., Lindera benzoin (L.) Blume, Lindera chunii Merr., Lindera obtusiloba Blume, Lindera angustifolia W.C. Cheng, and Lindera reflexa Hemsl. species are used as traditional medicines for their therapeutic effect on whitening, hepatitis C, hepatotoxicity, anti-cancer, antibacterial, antiproliferative, endothelial dysfunction, neuroprotection, antifibrotic, and effects on post-ischemic myocardial dysfunction [3][4][5][26]. However, due to the abundance of antioxidant compounds in Lindera genus plants, this genus can be considered a potential source of natural compounds that can be used for the development of therapeutic agents to treat oxidative stress-induced diseases.

L. aggregata (LA) is widely used as a tea in China and Southeast Asian countries. Both ethanolic and water extract of different parts of L. aggregate have been shown to possess antioxidant activities [19]. Water and EtOH extract of Lindera radix and the dried root of LA have been reported to decrease methane dicarboxylic aldehyde (MDA) and superoxide dismutase (SOD) levels and the expression levels of nuclear factor (NF-κB), tumour necrosis factor (TNF-α) and interleukin (IL-1β) in alcoholic liver injury. Further, the extract improved the histopathological status and decreased the serum levels of alanine aminotransferase (ALT), aspartate aminotransferase (AST), triglyceride (TG), total cholesterol (TC), and MDA and NF-κB, TNF-α, and IL-1β in liver tissues [21]. EtOH extract of LA leaves also showed free radical scavenging activity in a 2,2-diphenyl-1-picryl-hydrazyl-hydrate (DPPH) assay. Eleven polyphenols were identified in this extract by HPLC. A higher amount of quercetin-3-O-α-l-rhamnoside was detected in the extract and showed strong antioxidant capacities. Two alkaloids—linderaggredin C (3), (+)-N-methyllaurotetanine and (+)-isoboldine—isolated from the extract showed significant inhibition of superoxide anion generation in human neutrophils [20][21]. Furthermore, linderanean, which is an active compound isolated from LA root, increased activation of the Nrf-2 pathway in INS-1 cells and protected it from streptozotocin-induced apoptosis [22]. Five sesquiterpene lactones—lindera, galactone E, linderane, hydroxylindestenolide, and linderalactone—were isolated from the roots of LA and showed hepatoprotective activity against H2O2-induced oxidative damage on HepG2 cells [23]. Quercetin, quercetin-3-O-α-L-rhamnopyranoside, and quercetin-3-O-α-l-rhamnoside were found in high concentrations in the LA leaves, demonstrating free radical scavenging activity and modulation of the Nrf-2 pathway [3][20][27]. Overall, most of the compounds identified in the extracts of LA were associated with a higher level of antioxidant activities in different assays; hence, LA could be a potential source of antioxidant compounds and should be further studied for its therapeutic possibilities.

Moreover, LA, has long been used as a traditional medicine for rheumatic, cardiac and renal diseases in Japan and other countries. The water extract of its roots has been found to scavenge free radicals in a DPPH assay, and the leaf extract showed ROS, reactive nitrogen species (RNS), and superoxide anion scavenging activity as well as inhibition of lipid peroxidation and protein oxidation [4]. In an isolated rat heart, LA root extract protected against post-ischemic left ventricular dysfunction through scavenging hydroxyl radicals and opening the mitochondrial potassium ATP (KATP) channels [4][28]. Lindenenyl acetate, a compound isolated from the MeOH extract of the roots of LA, was reported to possess strong neuroprotective activity against glutamate-induced oxidative injury in hippocampal neuronal cells, most likely via extracellular signal-regulated kinase (ERK) pathway-Nrf-2/ARE-dependent HO-1 expression. Further, lindenenyl acetate increased the expression of HO-1, accumulation of Nrf2 and increased the promoter activity of ARE in mouse hippocampal HT22 cells [29]. Overall, both extract and bioactive compounds isolated from LA showed strong neuroprotective and cardioprotective activity via modulation of the cellular oxidative imbalance.

L. erythrocarpa (LE) is a widely distributed shrub in China, Japan, Korea, and Taiwan. Its dried fruits, which are also referred to as red mountain pepper, are used in folk medicine for indigestion and pain [30]. Lucidone, a cyclopentenedione isolated from the fruits of LE, has demonstrated significant protective abilities against free-radical and inflammation stimulator 2,2’-azobis (2-amidinopropane) dihydrochloride (AAPH)-induced oxidative stress in human keratinocyte cells (HaCaT) through up-regulating HO-1/Nrf-2 gene expression and down-regulating the NF-κB signalling pathway [31]. In addition, lucidone suppressed hepatitis C viral replication by induction of Nrf-2-Mediated HO-1 in Ava5 cells [32]. Moreover, among eight compounds isolated from the methanol fraction of LE, (−)-epicatechin, avicularin, and quercitrin prevented apoptotic cell death of H9c2 cardiomyocytes treated with buthionine-[S,R]-sulfoximine. These compounds also reduced the propidium iodide uptake by these cells and dose-dependently decreased the release of lactose dehydrogenase (LDH) [26].Therefore, these three compounds provide a potential lead compound for the development of antioxidative, cardioprotective agents that can be used as anti-viral or cardioprotective agents.

Several other species of the Lindera genus, such as L. reflexa, L. fruiticosa, L. angustifolia, L. oxyphila, and L. umbrellata have been reported to possess antioxidant activity in separate studies [37][38][39][40][41][42]. Hence, this genus represents a natural source of highly active antioxidant compounds that can scavenge free radicals and inhibit lipid peroxidation. Both extracts and bioactive compounds of this genus can modulate several oxidative pathways, including Nrf-2/HO-1, ERK, JNK, mitogen-activated protein kinase (MAPK), and ARE that are involved in oxidative stress-mediated cell death, cell proliferation, inflammation, etc.

3. Ethnomedicinal Use of Lindera obtusiloba

Lindera obtusiloba Blume is ubiquitously distributed in the north and southeast parts of Asia and has been used in traditional Chinese, Korean, and Japanese medicine over centuries [43][44]. In Korea and China, it is traditionally used for restoring blood stasis and inflammatory disorders [45]. The leaves of LO are traditionally consumed as both tea and food [46]. The consumable aqueous extract of LO demonstrated significant physiological beneficial effects, such as the inhibition of adipogenesis [47]. Further, in Korean traditional medicine, its leaf or branch extracts are widely used to treat liver diseases and for improving blood circulation, insomnia, and anxiety [48]. The young leaves of LO are fried and traditionally used as a Buddhist ceremonial dish. Furthermore, the oil extracted from LO is used as hair oil in some cultures [49]. The barks of LO are used to treat rheumatism in Chinese medicinal practice by heating the bark under the patient’s knee [50]. 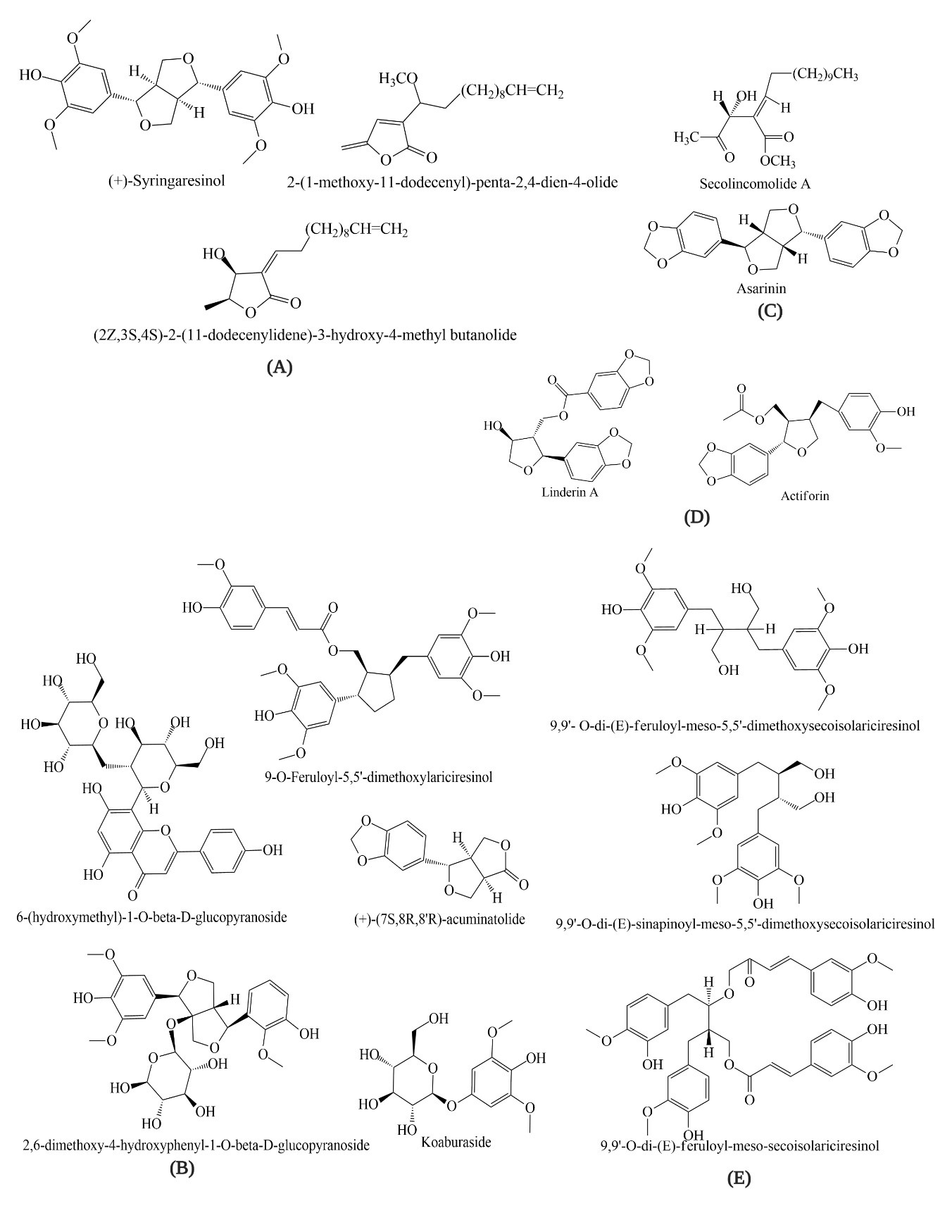