Comprehensive microbial studies reported the existence of constant interactions between oral, gut, and pancreatic microbiome showing that dysbiosis contributed to multiple changes associated with pancreatic ductal adenocarcinoma (PDAC). Mouse models and clinical studies suggest the involvement of the gut microbiome in PDAC initiation and progression through immune system modulation. Moreover, the composition of the pancreatic tumor microbiome might have the prognostic value for PDAC treatment efficacy. An association between pancreatic oncogenesis and particular microbial taxa may represent the key to the understanding of underlying mechanisms. Since pancreatic cancer represents a devastating disease with poor outcome, the study of the factors contributing to its development and progression is of the highest interest.

Pancreatic ductal adenocarcinoma (PDAC) is the most prevalent neoplastic disease of the pancreas accounting for more than 90% of all pancreatic malignancies [1]. It is the fourth most frequent cause of cancer-related deaths worldwide and is projected to be the second cause of cancer-related deaths by 2030 [2]. Genetic susceptibility, age, gender, ethnicity, diabetes mellitus, as well as alcohol abuse, vitamin D deficiency, tobacco use, high body mass index, and lack of physical activity tend to increase the development of PDAC [3]. Additionally, pancreatic inflammation is considered a long-term risk factor, and chronic pancreatitis supposed to raise the risk for PDAC up to 20 times [4]. Maekawa et al. observed that Enterococcus faecalis or lipoteichoic acid might aggravate pancreatic inflammation by stimulating inflammatory cytokines [5].

The composition of the oral, gut, and pancreatic microbiome in PDAC patients showed diverse alterations compared to healthy individuals. Prior studies support the existence of complex interactions between various host microbiomes and the pancreas. This communication shapes immune regulation influences the gastrointestinal microbiota via antimicrobial peptides derived from the pancreas and modulates the effect of PDAC therapy (Figure 1). 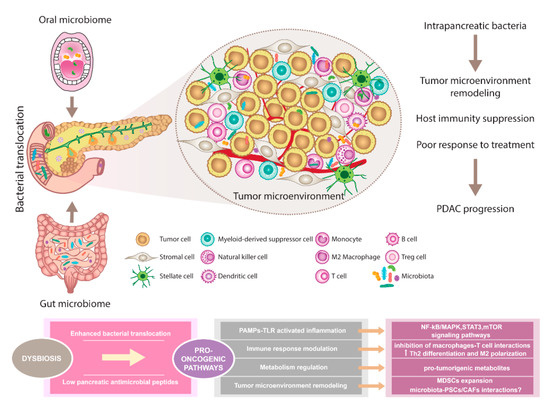 Oral health status with regard to inflammation of the gingiva [6][7], periodontal disease [8], and tooth loss [9] represent independent risk factors for PDAC. The exact mechanisms by which oral microbiota reach the pancreas are still unknown, but the proposed mechanisms involve the translocation via biliary/pancreatic ducts or through the blood circulation [10]. Variations in salivary microbiota from patients with pancreatitis and PDAC support the possibility of using salivary microbial biomarkers for systemic diseases prediction [11]. Interestingly, the associations between oral pathogens Porphyromonas gingivalis, Fusobacterium, Neisseria elongata, and Streptococcus mitis, and PDAC tumorigenesis have been evaluated. In this context, P. gingivalis showed a strong positive correlation with PDAC susceptibility. A detailed meta-analysis of 49 case-control studies comprising 5924 individuals (patients with periodontal disease and healthy controls) found a strong correlation between the presence of P. gingivalis and periodontal diseases [12]. Importantly, P. gingivalis was associated with an increased risk of PDAC with 59% greater risk of PDAC in a cohort of 361 PDAC patients compared to 371 matched-healthy controls [13]. Moreover, Fusobacterium spp. have been detected in pancreatic cancer tissue and show significant association with a worse prognosis [14].

Data from murine models demonstrated that the gut microbiome can colonize pancreatic tumors and modify its overall intratumoral bacterial composition. Helicobacter pylori became an established risk factor for gastric cancer and its role in PDAC development has also been assessed. One of the first observations came from the analysis of IgG antibodies against H. pylori by enzyme-linked immunosorbent assays. High seropositivity was detected in blood samples from patients with pancreatic and gastric cancer (65% and 69%, respectively) compared to other individuals [15]. A prospective study on more than 50,000 male participants revealed an increased risk of pancreatic tumors related to gastric ulcer. As the authors acknowledged, the elevated risk might be associated with greater endogenous nitrosamine formation and inflammatory response due to H. pylori infection [16]. Some studies and meta-analyses confirmed the link between H. pylori and increased risk of PDAC [17][18], while others did not support these findings [19]. Very recently, Hirabayashi et al. performed a large population-based cohort study in a Japanese population showing H. pylori infection and atrophic gastritis (AG) were not generally associated with the risk of pancreatic cancer; however, a significant positive correlation was detected among current smokers with AG [20]. Due to the conflicting results, further research is warranted to determine the true impact of H. pylori in pancreatic carcinogenesis.

A comparison of fecal microbiota from PDAC patients and healthy controls showed a higher abundance of Proteobacteria, Actinobacteria, Fusobacteria, and Verrucomicrobia in the gut of cancer patients. Interestingly, Proteobacteria (45%), Bacteroidetes (31%), and Firmicutes (22%) were most abundant within the intratumoral microbiome of PDAC patients [25]. This finding confirmed the previous results by Geller et al. considering the possible mechanism of interaction between the two compartments by a retrograde bacterial translocation from the duodenum via pancreatic ducts [23]. Metagenomic analysis of 68 tumor samples from PDAC patients showed the correlation between pancreatic tumor microbiome and patients’ survival. Microbial comparison of two cohorts identified as short-term survivors (STS) and long-term survivors (LTS) showed that tumors of LTS were characterized by a significantly higher alpha diversity (p < 0.05 for each alpha diversity index), and infiltration with cytotoxic CDþ/killer T cells compared to STS. Importantly, both cohorts were age, gender, stage, and treatment matched. According to the findings, tumor bacterial diversity was associated with OS (median survivals of the patients with high versus low alpha diversity were 9.66 and 1.66 years, respectively). This finding correlates with results showing that low bacterial diversity is linked to a worse outcome for cancer patients, especially those with hematologic malignancies. The ability of the gut microbiome to modulate the pancreatic tumor microbiome and influence tumor growth was confirmed by animal models with FMT from pancreatic STS, LTS, and healthy donors. Moreover, the positive effect of FMT on intratumoral immune cell infiltration has been observed [26].

However, not only the gut microbiome but also the gut mycobiome can directly influence the pancreatic microenvironment. Oral gavage of control and pancreatic-tumor bearing mice with GFP-labeled Saccharomyces cerevisiae indicated that endoluminal fungi could access the pancreas. According to the findings, both mouse and human PDAC tumors exhibited a greater than 3000-fold increase in the abundance of fungi compared with normal pancreas. Furthermore, a distinct composition of mycobiome and enrichment with Malassezia spp. has been observed in adenocarcinoma samples. The ablation experiments confirmed the accelerated oncogenesis after Malassezia globosa repopulation in murine models, suggesting the participation of the C3 complement cascade via mannose-binding lectin activation in promoting PDAC [27].

The application of individual microbial signatures as the early biomarkers for cancer development and prognostic indicators of treatment response is still an important challenge for microbiota research in PDAC patients. Moreover, the existence of communication between the gut and pancreatic cancer-specific microbiome brings new opportunities for the studies related to the therapeutical implication of microbiota modulation.

Acknowledgments: The research was funded by the Scientific Grant Agency of the Ministry of Education, Science, Research and Sport of the Slovak Republic and Slovak Academy of Sciences VEGA, project number 2/0052/18.