The unique properties of graphene make graphene (and its derivatives) a valuable nanomaterial for 2D or 3D stem cells culture maintenance and differentiation. To the best of our knowledge, this is the first review worldwide that besides provide clues and insights on the way we can much better manage and study stem cells especially for tissue engineering, regenerative medicine, transplantation, orthopedic surgery.

The discovery of the interesting intrinsic properties of graphene, a two-dimensional nanomaterial, has boosted further research and development for various types of applications from electronics to biomedicine. During the last decade, graphene and several graphene-derived materials, such as graphene oxide, carbon nanotubes, activated charcoal composite, fluorinated graphenes and three-dimensional graphene foams, have been extensively explored as components of biosensors or theranostics, or to remotely control cell–substrate interfaces, because of their remarkable electro-conductivity. To date, despite the intensive progress in human stem cell research, only a few attempts to use carbon nanotechnology in the stem cell field have been reported. Interestingly,most of the recent in vitro studies indicate that graphene-based nanomaterials (i.e. mainly graphene, graphene oxide and carbon nanotubes) promote stem cell adhesion, growth, expansion and differentiation. Although cell viability in vitro is not affected, their potential nanocytoxicity (i.e. nanocompatibility and consequences of uncontrolled nanobiodegradability) in a clinical setting using humans remains unknown. Therefore, rigorous internationally standardized clinical studies in humans that would aim to assess their nanotoxicology are requested.

Nanomaterials encompass a variety of materials with nanoscale structural features, including nanoparticles, nanofibres, nanosurfaces and nanocomposites. As nanomaterials become increasingly more sophisticated in their range of physical properties, e.g. two-dimensional (2D) surfaces, three-dimensional (3D) structures, variable porosity, stiffness, biocompatibility and biodegradability, their diversity of use for medical applications continues to expand. Both physical and chemical properties of biomaterials are now more readily altered, providing opportunities to improve efficacy and safety (Huebsch and Mooney, 2009)[1].

Since Langer and Vacanti (1993)[2] proposed the combined use of stem cells (SCs), nanomaterial-based scaffolds and inductive factors as the basis for tissue engineering (TE), researchers have been able to fabricate increasingly complex tissue/organ constructs and some are used clinically today as standard treatment for a variety of conditions. Scaffolds are processed in order to produce 3D structures, with appropriate shape, size, architecture and physical properties tailored to fulfil specific functions. In other words, TE products are designed to mimic tissue architecture and responses. Therefore, key scaffold requirements are biocompatibility, controlled porosity and permeability, suitable mechanical and degradation kinetics properties comparable to those of the targeted tissue and, additionally, support for cell attachment and proliferation by the addition of nanotopography to the biomaterial surface (Chung and King, 2011; Carletti et al., 2011)[3][4].

TE and regenerative medicine (RM) represent areas of increasing interest, due to the major progress in cell and organ transplantation, as well as advances in materials science and engineering. Isolated from a variety of embryonic, fetal and adult tissues, SC populations consequently differ in their ease of in vitro culture, proliferation rates and capacity to form specialized cell types. Moreover, their unique, pluripotent characteristics related to the differentiation into derivatives of all germ layers in vitro, ex vivo and in vivo, regeneration (i.e. high self-renewal capacity), development, remodelling, and replenishment of aged and diseased tissues, make them leading candidates in TE research and RM (e.g. the treatment of currently incurable diseases).

Conceptually, SCs can be divided into two major types:

1. Embryonic stem cells (ESCs), derived from a very early embryo and adult stem cells, can be found in postnatal tissues (e.g. bone marrow, adipose tissue, umbilical cord) (Nelson et al[5]., 2006). In 1981, the first ESCs derived from mice were isolated and grown in culture (Evans and Kaufman, 1981)[6] and almost two decades later the isolation of human ESCs was reported by Thomson et al. (1998)[7]. ESCs are considered pluripotent notably due to their ability to self-renew (Figure 1A) and differentiate in various cells lineages (Figure 1B). The pluripotency of ESCs can be demonstrated by either: (a) injection of ESCs into immune-deficientmice to produce teratomas containing cells expressing markers of each of the three primary germ layers, endoderm, ectoderm and mesoderm (Martin, 1981; Thomson et al., 1998)[7][8]; (b) injection of ESCs into a mouse blastocyst to form a chimeric mouse and subsequent assessment of offspring to confirm incorporation of these cells into the germline (Bradley et al[9]., 1984). Evidence suggests that human ESC-derived cell populations display low immunogenicity and could, potentially, be transplanted with minimal immune suppression (Drukker et al[10][11][12]., 2002; Fändrich et al., 2002; Li et al., 2004). However, the conditions required for maintaining pluripotency and self-renewal of mESCs and hESCs in vitro are quite different, and thus studies in one animal ESC line are not always transferable to another. In addition to ethical and political concerns, their clinical application is severely limited by their lack of accessibility and the difficulties that impede purification and manipulation techniques, as well as concerns related to the risk of teratoma formation (Fan et al[13]., 2011). 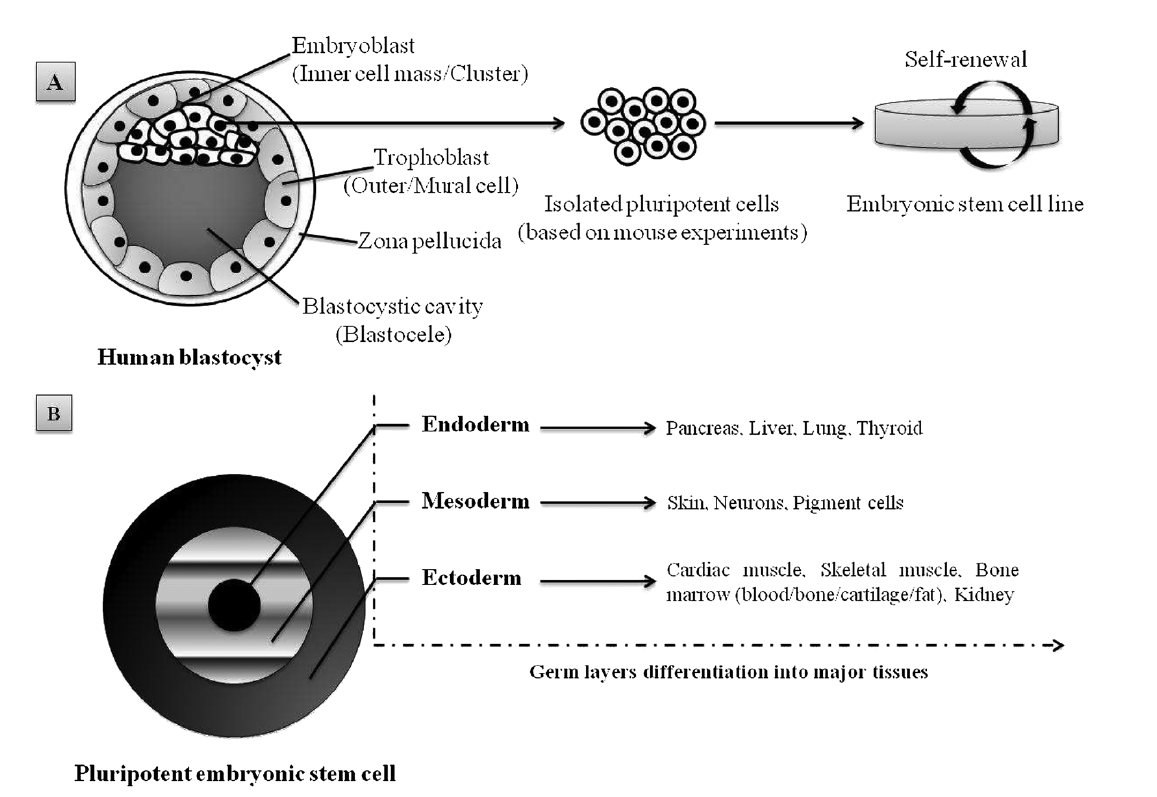 Figure 1. Schematic representation of pluripotent human ESC lines isolated from the inner cell mass of a blastocyst-stage embryo: (A) appropriate culture maintenance of ESCs allows them to undergo self-renewal, proliferation with retention of the SC state; (B) alternatively, upon stimulus (e.g. growth factors, electrostatic interactions/electrical pulses), ESCs can differentiate into any cell type of the three germ layers (i.e. endoderm, mesoderm or ectoderm). Adapted from Kingham and Oreffo (2013)[14], with permission.

2. Adult SCs, which are ethically preferable to ESCs but, unlike the latter, their sources are somewhat lineagerestricted in humans. Also, their isolation can prove complex and can be painful for the patient, besides their capacity to self-renew that makes their expansion in vitro a significant challenge. However, mesenchymal stem cells (MSCs), one of the many types of adult SCs, display interesting features that make them suitable for tissue regeneration and cell therapy, such as versatility in changing their phenotype during differentiation, and ease of isolatation and culture (Pittenger et al[15]., 1999). Because MSCs of multiple adult vertebrate species originate from extraembryonic mesoderm, their capacity to differentiate into adipogenic, chondrogenic, osteogenic, myogenic and fibroblastic lineages (Figure 2A) has been extensively studied (Pittenger et al[13][15][16]., 1999; Fan et al., 2011; Iancu et al., 2011). Similarly to human ESCs, MSCs and human ESC-derived MSCs are also able to provide immune-suppressive properties (Yen et al., 2009; Ghannam et al., 2010; Shahrokhi et al., 2014)[17][18][19] which are important to consider when it comes toTE, RM and global cell-based therapy. Interestingly, adult somatic cell-derived ESC-like induced pluripotent stem cells (iPSCs; Figure 2B) are increasingly being investigated as a patient-specific alternative to human ESCs, with less controversy. Importantly, Yamanaka and colleagues demonstrated that mouse fibroblasts could be reprogrammed to mouse ESC-like cells by the expression of four mouse ESC-specific transcription factor genes (i.e. Klf4, c-Myc, Oct-3/4 and Sox2) (Takahashi and Yamanaka, 2006; Okita et al[20][21]., 2007). Similarly, adult human fibroblasts have been genetically manipulated to form human iPSCs (Takahashi et al[22][23]., 2007; Nakagawa et al., 2008). Subsequently, further reports have described iPSCs formed from non-pluripotent, somatic adult cells, and additional strategies have been developed to limit genetic manipulation or to incorporate reprogramming factor-free methods (O’Malley et al[24]., 2009). The high degree of similarity between iPSCs and ESCs, while meanwhile enhancing patient specificity and lowering ethical concerns about iPSCS, undeniably constitutes a new hope for stem cell-based therapy and, therefore, for TE and regenerative therapies (Condic and Rao, 2008; Amabile and Meissner, 2009; Lee et al., 2009)[25][26][27]. 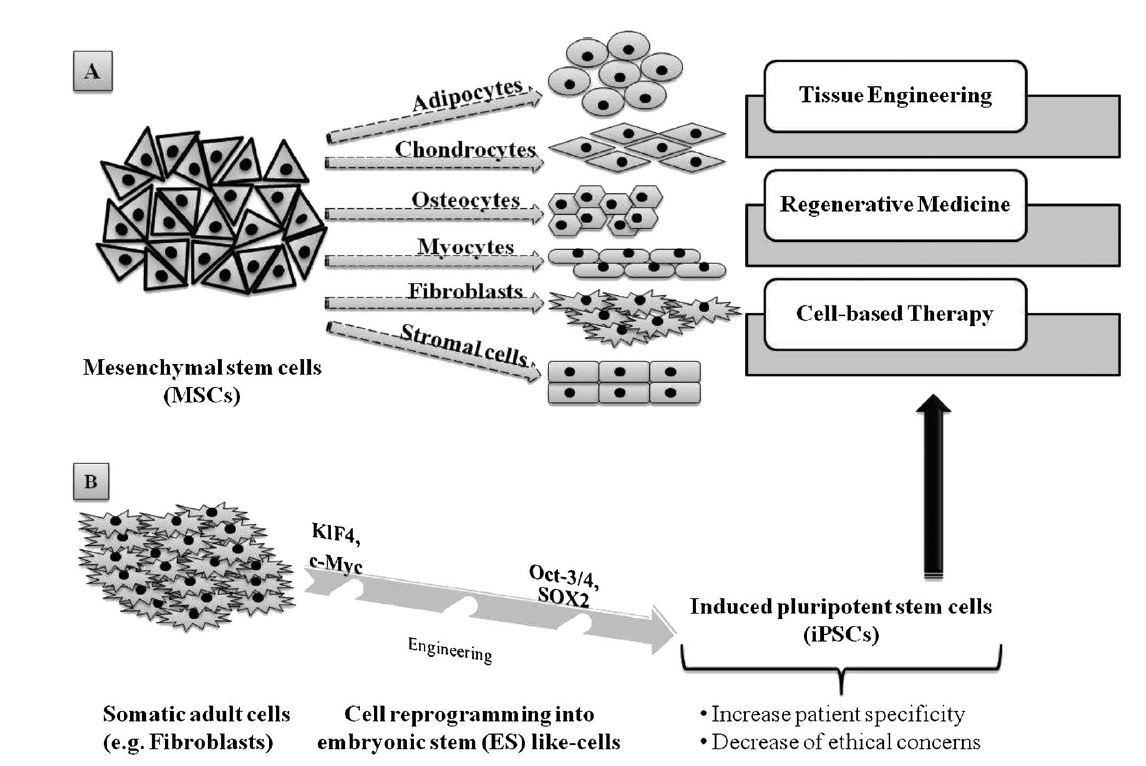 In fact, regardless of stemcell type, current focus remains on SC expansion, maintenance of the SC state, differentiation and, ultimately, transplantation and clinical applications. In some ways, nanomaterials such as graphene (G) and derivatives may hold the key for future advances in TE and RM (Table 1). G (also known as free-standing 2D crystals or single atom-thick crystallites) is an allotrope of pure carbon with atoms arranged in a regular hexagonal pattern, similar to graphite (GP) but in a single planar sheet (i.e. a flat monolayer) (Figure 3A) of sp2-bonded carbon atoms that are densely/tightly packed in a 2D honeycomb crystal lattice (Geim and Novoselov, 2007; Geim and MacDonald, 2007; Geim, 2009)[28][29][30]. It can be wrapped up into 0D fullerenes, rolled into 1D nanotubes or stacked into 3D-GP (Geim and Novoselov, 2007)[30].