Conservation of Prehistoric Paintings in the Magura Cave (Bulgaria)

This study is aimed at evaluating the effectiveness and the compatibility of two alternative treatments, in view of their possible use for conservation of prehistoric paintings in the Magura cave (Bulgaria). The paintings are made of bat guano applied over limestone, therefore two sets of laboratory specimens were considered: stone specimens and stone specimens covered with a layer of sterilized bat guano. The two investigated treatments were a commercial product based on ethyl silicate (“ES”) and a solution of diammonium hydrogen phosphate (“DAP”), aimed at forming calcium phosphates. The results of the study indicate that both treatments were able to increase mechanical properties of stone, the increase being higher for “DAP”. Both consolidants caused acceptable color changes, but the “ES” treatment significantly decreased stone wettability, water absorption and water vapor permeability, while the “DAP” treatment slightly affected those properties. In the stone+guano specimens, the presence of the guano layer affected the penetration of the consolidants, thus partly reducing their effectiveness. Compared to the stone samples, the guano layer experienced a more intense color change, alongside visible cracking. However, the adopted methodology to replicate the cave paintings was not completely successful, as the so-deposited guano layer was very prone to detachment when dry, unlike cave paintings. Future work will be dedicated to assess the consolidant performance onto samples that resemble even more closely the conditions of the cave paintings, by improving the methodology for the guano layer deposition and by contaminating specimens with soluble salts before consolidant application.

The present enstry udyaimed at investigating the effectiveness and the compatibility of two treatments that have been taken into consideration for the conservation of prehistoric paintings in the Magura cave (northwest Bulgaria). The Magura cave contains impressive prehistoric paintings, displaying both figurative and abstract compositions [1]. Religious ceremonies, hunting scenes, signs, and graphic motifs decorate one of the cave chambers—the Gallery with the paintings (Figure 1). 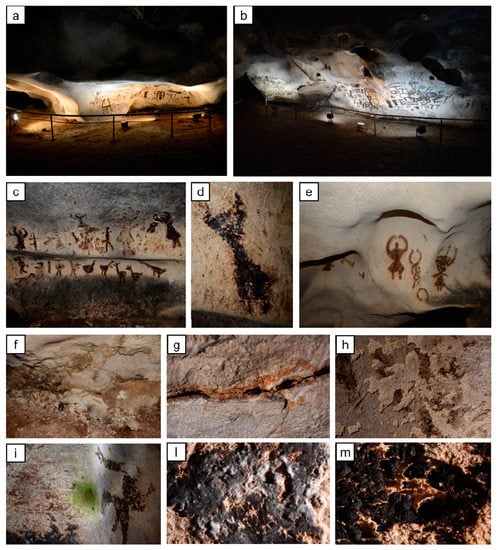 ), details of the cave paintings (

), and details of the deterioration patterns ((

)—cracks, powdering, blistering, and fragmentation of the limestone; (

m)—cracking and loss of the original guano painting due to the drying of the surface and powdering of the stone).

)—cracking and loss of the original guano painting due to the drying of the surface and powdering of the stone).

These artworks, dating back to some 5500 years ago, are made of fossilized guano of cave-dwelling bats applied over limestone [2][3][4][5][2,3,4,5]. After opening to the public in 1961, with the consequent presence of visitors and the use of artificial light, the delicate balance of environmental conditions inside the cave has been altered. Despite the cultural relevance of the Magura Cave, unfortunately, the micro-environmental data, such as temperature, relative humidity, CO2 concentration, and atmospheric pressure, have never been professionally measured and controlled. Today, the cave suffers from biological colonization and stone pulverization, originated by crystallization of soluble salts present in rising damp from the ground. Deterioration patterns, such as green biofilm and white and black colorations over the stone/paintings surface, together with limestone powdering, blistering, and fragmentation [6] [6] (Figure 1), led to the closure of the Gallery in May 2019.