Abstract: Radio-frequency identification (RFID) sensors are one of the fundamental components of the Internet of Things.  Within this framework, chipless RFIDs are a breakthrough technology because, removing the cost associated with the chip, are at the same time printable, passive, low-power and suitable for harsh environments. For this reason, there is a clear motivation and interest to extend the chipless sensing functionality to physical, chemical, structural and environmental parameters. Temperature and humidity sensors, as well as localization, proximity, and structural health prototypes, have already been produced, and many other sensing applications are on the way. In this review, architectural approaches and requirements related to the materials employed for chipless RFID sensing are summarized. The state-of-the-art of many categories of sensors and their applications is reported and an analysis of the current limitations and possible solution strategies are given, together with an overview of expected future developments.

In the last few years, we have seen a dramatic diffusion of wireless technologies. More specifically, the technological advancements of recent years have paved the way for the diffusion and the increasing pervasiveness of wireless sensors technologies in the framework of the internet of things (IoT). The IoT is a system composed of heterogeneous devices and organized as a network. Each device (a thing) is provided with unique identifiers (UIDs) and the capability to share information or transfer data over a wireless or wired network without requiring human interaction. Everyday objects, such as a lamp or a washing machine but also animals and people, could be part of an IoT network if they are provided with a unique identifier and are able to transfer data over the network thanks to a radio frequency front end. A thing is a unit element of an IoT system and is able to collect data from its sensors, and then to process and share data toward a wireless channel. To improve the pervasiveness of an IoT system, devices with a high degree of miniaturization, low power and low cost are urgently needed. In such a scenario the use of radiofrequency identification (RFID) is a very interesting and widespread solution to implement IoT systems or networks of distributed sensors. RFIDs are reasonably cheap, are provided with unique identifiers and can be equipped with a variety of sensing capabilities. Because of these characteristics, RFIDs have been successfully adopted in many practical applications such as the tracking of goods and foods in supermarkets and shops, the tracing of books in libraries, in environmental sensing [1] and for many applications in the general field of the IoT.

2. Chipless RFID Sensors for the Internet of Things

While chipped RFIDs are a well-consolidated technology with an enormous and growing market, current research is concentrated on finding solutions providing an advantage in terms of cost and compactness [2]. The best option to reduce the cost of RFIDs is an approach that eliminates the use of the chip, producing a device that is therefore called “chipless RFID” [3][4]. Such a device can be equipped with sensing capabilities while remaining extremely cheap, printable, and suitable for mass production and harsh environments [5]. Moreover, it can be made disposable or biodegradable [6] using proper materials to fabricate it.

For all these reasons, in the last few years, the scientific literature paid large attention to this type of sensors. 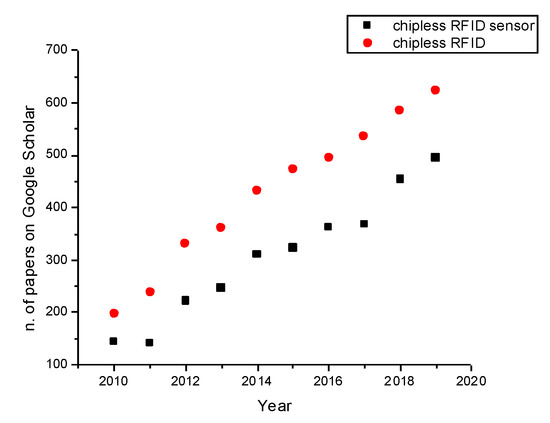 Figure 1. Number of entries per year on Google Scholar using the keywords “chipless RFID” (Radio-frequency identification) and “chipless RFID sensors” as for 24 February 2020.

The chipless RFID techniques can be divided into two groups based on the encoding mechanisms: time-domain (TD) [7] or frequency-domain (FD) [8][9]. TD chipless-RFID tags are designed to encode the information in the domain of time. Usually, TD tags are implemented using a propagating structure such as a microstrip and a pulsed interrogating signal that travels along the propagating structure. The information is encoded by using discontinuities at defined positions: the presence of a discontinuity encodes the bit value 1, its absence is the value 0. In order to identify the position of a bit, the delay of the signal must be considered. When an electromagnetic pulse propagates through the substrate, part of it is reflected, in the positions where there is a discontinuity. Such reflections are converted back into electromagnetic energy and retransmitted to the reader. This working principle is called time-domain reflectometry (TDR), and the identifier code ID is represented by the echoes generated by the reflectors. There are different ways to implement time-domain chipless-RFID tags. A compact solution makes use of surface acoustic wave (SAW) resonators that could provide tags with a high number of bits (up to 256 [10]). However, they are far too expensive to be competitive with other RFID solutions, because they require piezoelectric materials. A cheaper and widely used solution exploits the use of discontinuities (or reflectors) located along the main delay line such as a microstrip line. The reflectors can be implemented by introducing bends, stubs or lumped complex impedances placed at defined positions. The reader sends a pulse that propagates through the delay line and is reflected at the points where the discontinuities are placed. The identification code of the tag is constituted by the set of reflections or echoes produced by the discontinuities in the tag.

The problem with this kind of tags is that the electromagnetic waves propagate along the delay line at the speed of light. In order to produce measurable delays between the echoes, a very short pulse or a very long tag must be used to avoid the overlapping between the different echoes. Very short pulses are quite difficult to obtain in practice and a generator of such pulses is quite expensive. A long transmission line is an alternative solution but the resulting tags are quite large and therefore the bit encoding capability is very limited for tags based on the time domain.

The FD chipless tag is usually implemented by using multiple resonators tuned at different frequencies. The different frequencies associated with the resonators are distributed within a given frequency band. Consequently, the interrogating signal must have a bandwidth that covers all the resonators frequencies. The effect of a resonator is the production of singularities in the amplitude and/or phase of the frequency response of the tag. In the simplest encoding method, each bit of information is represented by a resonator. The presence of the resonator encodes the bit 1 while its absence represents the bit 0. More sophisticated encoding systems have also been proposed [2][11].

The interaction between the interrogating electromagnetic wave and the tag requires a transmitting and a receiving antenna usually in cross-polarized configuration to improve the wireless communication capabilities of the tag, as reported in [8][12]. This kind of FD tags are called retransmission based tags [13]. Another class of frequency domain tags are the so-called backscattered chipless-RFID tags, where the resonant elements provide the information through the spectral signature introduced in the response of the Radar Cross Section (RCS) [2]. The structure of this kind of tags does not require the presence of an antenna, hence the size of the tag is strongly reduced because it contains only the resonators. An example of a very simple backscattered tag is composed of multiple dipoles with a variable-capacity implemented on a dielectric substrate [14][15]. The goal of this technique is to create multiple resonances in the bandwidth of the tag. Similar behaviour can be obtained not only by using dipoles with variable length, but also circular ring resonators or other planar structures. The main limitations of the FD tags are both the bandwidth required to encode a large number of bits and the number of resonant elements that must be increased to increment the information. Consequently, special readers are required and the compactness of the tag is lost when enough information is stored. To reduce or avoid such limitations, several researchers have proposed fractal tags [16][17] or particular geometries [18][19][20] able to concentrate a large number of resonators and, at the same time, keeping their quality factor high.

The limitation in the number of bits is very important in tracking applications, where chipless RFID tags are competing with barcode technology for the labelling of commercial products. The international standard requires a minimum number of bits that has not been met yet by FD tags, and big efforts are currently being made to reach this target.

In sensing applications, the quantity of information stored in the tag is not a critical parameter. While it is true that, in the framework of IoT, it would be desirable to identify the sensing tag with a UID, this has to be made within closed networks and requires much less information than is used in the tracking of goods. Moreover, identification and sensing can be made using similar resonating structures on the same tag. For these reasons, the applications of chipless RFID technologies in the field of sensors are steadily growing in number and variety.