A strategy was described to design antimicrobial peptides (AMPs) with enhanced salt resistance and antiendotoxin activities by linking two helical AMPs with the Ala-Gly-Pro (AGP) hinge. Among the designed peptides, KR12AGPWR6 demonstrated the best antimicrobial activities even in high salt conditions (NaCl ~300 mM) and possessed the strongest antiendotoxin activities. These activities may be related to hydrophobicity, membrane-permeability, and α-helical content of the peptide. Amino acids of the C-terminal helices were found to affect the peptide-induced permeabilization of LUVs, the α-helicity of the designed peptides under various LUVs, and the LPS aggregation and size alternation. A possible model was proposed to explain the mechanism of LPS neutralization by the designed peptides. These findings could provide a new approach for designing AMPs with enhanced salt resistance and antiendotoxin activities for potential therapeutic applications.

Antimicrobial peptides (AMPs) have been found in the innate defense systems of plants, insects, and animals. AMPs can incorporate and disturb microbial membranes and hence cause their death. Owing to these reasons, AMPs may be the solution to the problem of bacterial resistance. Problems such as salt sensitivity, cost of synthesis, bioavailability, and stability have limited the therapeutic applications of antimicrobial peptides. Cecropins are a family of antimicrobial peptides widely found in the innate immune system of Cecropia moth. Cecropins exhibit broad spectra antimicrobial and anticancer activities [1]. The structures of cecropins are composed of 34−39 amino acids with an N-terminal amphipathic α-helix, an AGP hinge and a hydrophobic C-terminal α-helix. Recently, cecropin A and the cecropin-like peptide papiliocin were found to possess anti-inflammatory activities in LPS-stimulated murine macrophage. Studies of cecropin analogues , cecropin A/cecropin B hybrids, and cecropin A, LL-37, and magainin hybrids also revealed potential antimicrobial and anticancer activities. We hypothesize that the binding and neutralization of LPS of cecropin and cecropin-like peptides is through similar structural features like S1-Nal-Nal [2]. Here, we use this structural feature to create a new type of antimicrobial peptides by linking an amphipathic peptide and a hydrophobic peptide with the AGP sequence. In the study, we demonstrated the antimicrobial and LPS neutralization activities of these designed peptides.

To investigate the amphipathic helix–AGP–hydrophobic helix on the antimicrobial and neutralization activities of LPS, two peptides KR12 and RW6 were used for the N-terminal and C-terminal helices. KR-12 (KRIVQRIKDFLR) was derived from human host defense cathelicidin LL-37 and was found to possess antimicrobial activities against Gram-negative and Gram-positive bacteria. RW6 (RRWWRW) was derived from the reversed sequence of WR6 (WRWWRR) which had moderate antimicrobial activities. The helical wheel analyses of the designed peptides are shown in Figure 1. KR12AGPKR6, KR12AGPWR6 and KR12AGPVR6 were designed to compare the effects of hydrophobicity, membrane-permeability, and α-helical contents. All peptides were acetylated and amidated at the N- and C-terminus. 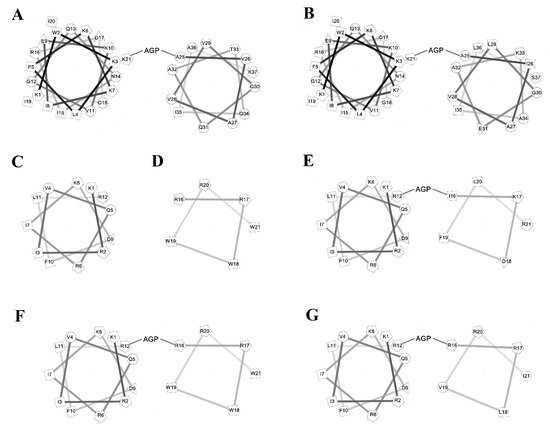 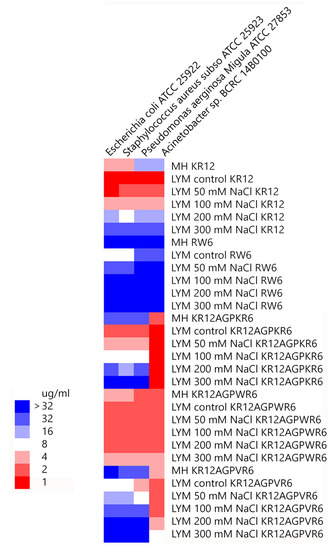 The ability of binding and neutralizing LPS in vitro was measured by the LAL assay which is well-known as the most sensitive and specific method. As shown in Figure 3, KR12AGPWR6 blocked the interaction between LPS and factor C (an LPS sensitive serine protease isolated from the hemocyte granules of the horseshoe crab Limulus), and neutralized the downstream reaction dose-dependently (greater than 60% inhibition at 64 μg/mL). KR12, RW6, KR12AGPKR6 and KR12AGPVR6 had only limited effects (less than 25% inhibition at 64 μg/mL). To evaluate the anti-LPS effect of KR12AGPWR6 in vivo, the mice were divided into three groups and received PBS, LPS, and a mixture of LPS and peptide, respectively. Blood was collected via the tail veins of the mice 1.5 h after injection. Serum TNF-α production increased dramatically in the LPS group. The KR12AGPWR6-treated mice displayed a significantly lower level of TNF-α (Figure 4A). Pathological evaluation of the lung tissues revealed that the proliferation of alveolar epithelial cells and pulmonary hemorrhage were reduced in mice treated with KR12AGPWR6 (Figure 4B–D). 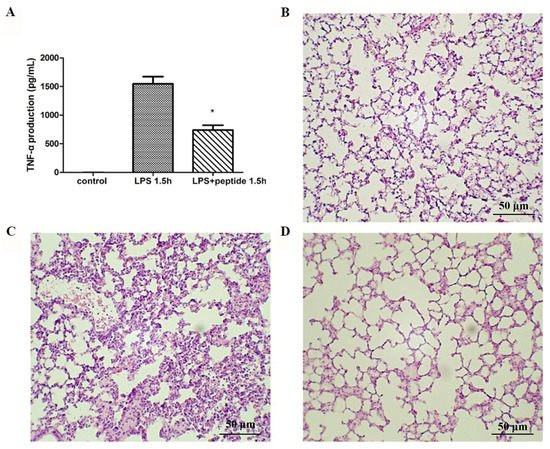 It has been reported that LPS aggregation promoted by polymyxin B and rBPI21 might inhibit the interaction of LPS with its cell receptors and hence block cytokine production. Dynamic light scattering (DLS) was used to measure the size increase of the designed peptides. The results indicated that KR12AGPWR6 promoted POPC/LPS LUVs aggregation and increased their mean sizes. KR12AGPKR6 and KR12AGPVR6 did not have the abilities in aggregating and increasing particle size (Figure 5). 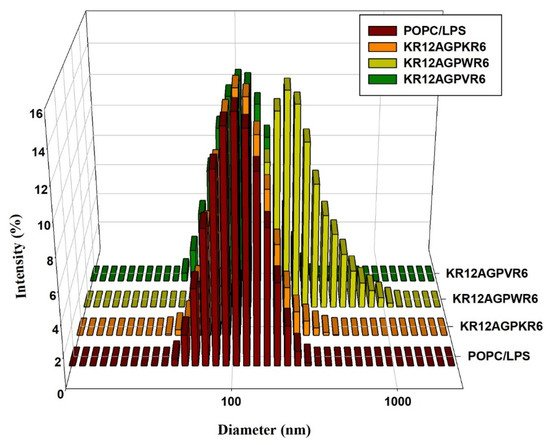