The entry describes the benefits associated with an accurate integration of terrestrial and marine geospatial datasets for environmental sciences. Attention is given to technology and interdisciplinarity which are playing an important role in this direction.

New methods and techniques of offshore investigation adopted over the last 50 years and the latest advances in computer vision have played a crucial role in allowing a seamless combination of terrestrial and marine data. The integration of terrestrial and submerged geo-environmental datasets is particularly crucial to a comprehensive understanding of environmental changes taking place in coastal regions. There are seven topics for which this integration could be of tremendous benefit for environmental research: (1) geomorphological mapping; (2) Late-Quaternary changes of coastal landscapes; (3) geoarchaeology; (4) geoheritage and geodiversity; (5) geohazards; (6) marine and landscape ecology; and (7) coastal planning and management.

Ongoing climate changes are producing remarkable impacts worldwide [1]. From the melting of polar ice sheets, and the consequent sea-level rise, to the increasing occurrence of extreme weather events [2], climate changes are notably modifying and/or threatening Earth’s environment and ecosystems. Considerable effects have been observed especially in coastal regions [3], which host more than 10% of global population [4]. Coastal erosion, flood risk, increased landslide occurrence and wetland loss are expected to intensify in the coming decades [2], posing serious threats for inhabited areas and environmental assets. A major issue is the uncertainty about the extent and timing of climate-driven impacts, which has often reflected in a "non-immediate" adoption of effective prevention measures and in a non-sustainable coastal management, producing negative socio-economic consequences [2][5].

Coastal zones are the interface between terrestrial and marine environments and together with nearshore ones are affected by multiple physical processes that originate in both terrestrial (i.e., fluvial) and marine (i.e., waves and tides) environments. These processes drive geomorphic change, which determines increasingly hazardous conditions (e.g., unstable cliffs, lowlands susceptible to floods) in coastal areas in relation to climate changes and economic development [3][4]. A comprehensive understanding of environmental changes taking place on coastal regions, whose ecosystems are highly productive and very susceptible to changing environmental conditions, relies on an accurate integration of both terrestrial and submerged geo-environmental datasets. This practice is often lacking in coastal management and that still need to be addressed in many regions of the world, where climate change, rising sea levels, tectonic and marine geohazard of different nature are pressing harder year by year and resources need to be more carefully managed (e.g., [6]).

The attention recently paid to the integration of terrestrial and marine spatial datasets for different purposes is notable, although the generation of seamless DEMs and DTMs, based on a reliable integration of onshore, nearshore, and offshore data, is often a challenge for the most part of the coastal regions, especially due to technical issues often associated with the integration of multisource data (i.e., differences in resolution, precision, and accuracy among the datasets available). Addressing this process relies on the development of innovative approaches in using methods and techniques traditionally developed for the investigation of terrestrial environments, for exploring and imaging submarine landforms. A variety of challenging and promising techniques capable of providing a homogeneous and continuum representation of the Earth’s surface from the land down to the deep seafloor has been recently tested. They basically rely on the collection of high-quality data for the integration of multiscale elevation datasets coming from different sources (i.e., bathymetric Light Detecting And Ranging (LiDAR), photogrammetry, and echo-sounders—Figure 1). The application of photogrammetry based on the Structure from Motion technique (using a variety of platforms such as scuba diving, uncrewed surface vehicles—USV—and/or uncrewed aerial vehicles—UAV) has gained in particular new attention as a valuable tool for obtaining bathymetric measurements in very shallow environment, where acoustic devices cannot be safely employed, demanding high costs as in the case of LiDAR surveys [7]. The intertidal and nearshore zones are indeed of critical importance to be surveyed to bridge the gap between the land and the sea and to obtain a reliable integration of marine and terrestrial spatial dataset (Figure 1). 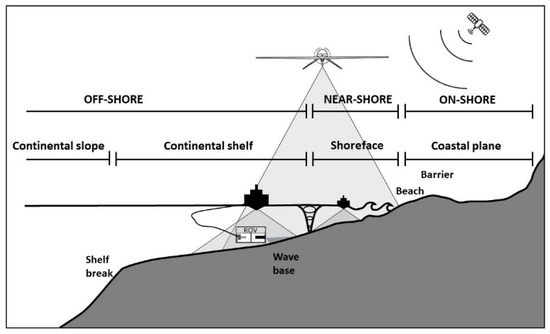 3. Why Integrating Terrestrial and Marine Datasets?

The generation of a seamless digital terrain model that spans the terrestrial and marine environments is a key process for the mapping, modelling, and forecasting of the impact climate-driven changes to coastal geomorphic processes and environmental responses that may occur. This process has in particular the potential of making achievable a more integrated and holistic approach to the management of the coastal zone and the establishment of a timely disaster response and adoption of mitigation measures, especially for those climatically sensitive coastal areas where the changing climate is already severely pressing coastal population and their economy.

Hereafter are seven main distinct reasons why a wider integration of land and sea datasets is of great benefit for the associated implications in the context of global environmental changes. In detail, integrated research merging terrestrial and submarine data can substantially contribute to:

The accomplishment of the outcomes reported in the literature and examples listed in previous chapters is mostly due to the widespread recent availability of new technologies and software that enable scientists to acquire geo-environmental spatial data that were unrecoverable before the 1970s in the submarine environments. Their integration with terrestrial data has become feasible especially with the generation of data format and products suitable for implementation into GIS platforms that in turn made possible to handle and analyze complex and heterogeneous datasets from the onshore to the offshore zone, as shown in most of the previously cited works.

The expansion of GIScience can be dated back to the 1990s. As soon as marine datasets became accurately "geo-referenced", thanks to our ability in obtaining geographical positions at sea through the development of GPS, their structure, format and way of representation moved immediately toward the form of geospatially enabling the data to create maps and 3D scenes of the marine environment. Since "marine" GIS has evolved adapting a technology originally designed for land-based applications, the integration of marine and terrestrial datasets has been quite immediate. This especially happened for those marine studies dealing with coastal environments or applications that benefit from the investigation of spatial relationships within and between marine and terrestrial dataset—such as measuring and monitoring the seascape or modelling/predict future scenarios [8]. An important trigger in applying this new approach for coastal and marine data visualization and analysis came undoubtedly from industry, especially in the fields of hydrographic surveying and production of nautical charts and publications.

It is clear that no single optical imaging system can meet all the needs of underwater 3D reconstruction. The different systems cover very different spatial scales, resolutions and accuracy, being suitable for different applications. Furthermore, it is important to underline the lack of systematic studies to precisely compare the performance of different sensors in relation to the same scenario and under identical conditions. However, technology and computer vision are definitely on the way of addressing all pitfalls of the mentioned applications, to obtain 3D optical reconstructions more reliable over multiple spatial scales, through innovative sensors and data processing. Finally, it should be emphasized that the possibility of obtaining accurate photorealistic 3D reconstructions, also allows the use of interactive tools for visualization and exploration in 3 dimensions, designed to support the interpretation and analysis of the obtained spatial data. These large, complex and multicomponent spatial datasets can indeed be used to develop innovative learning tools for environmental sciences, presenting new worlds of interactive exploration to a multitude of users [9].

Most terrestrial landscapes and landforms have always been investigated for several purposes and benefited from high accessibility to surveyed areas and high-resolution data. On the contrary, the submarine environment has struggled in being represented with the same resolution and coverage as its terrestrial counterpart because of its remoteness and/or its limited accessibility and the high costs imposed by the need to use expensive infrastructures and sophisticated technologies (especially research vessels, underwater robotics and a multitude of sensors). Nevertheless, remote sensing tools operating from satellite, aerial platforms and vessels or autonomous vessels and drones have contributed to obtain elevation data for both land and sea areas with a comparable resolution, establishing submarine geomorphology as a field of research that is also remarkably contributing to marine environmental management, with an increase in many associated applicable research.