The Social Lives of Free-Ranging Cats

Domestic cats are ubiquitous across the human landscape. They are found living as companions in human homes and living as free-ranging cats (FRCs) on city streets, in parking lots, on farms, and other outdoor locations where resources such as food, shelter, and mates are plentiful [1]. The social system of FRCs has been described as “facultative sociality” and domestic cats display much flexibility in their social behavior [1,2,3][1][2][3]. FRCs are found living both solitarily and in groups. Cat groups live at low and high densities, ranging from <1 cat per km2 to over 2500 cats per km2 [4]. Despite the diversity of social situations in which FRCs live, the degree to which FRCs are social is still debated [5].
FRCs include any domestic cat (Felis silvestris catus) that has no constraints on their movement. FRCs can be composed of cats of various levels of experience with and dependence on humans. Key terms related to FRCs are defined in Table 1. Individual FRCs will differ in their socialization experience (e.g., duration of socialization, number of social partners, when the socialization occurred in the development of the individual) and the degree to which they are domesticated (e.g., number of generations or strength of selection) [6]. As Udell and Brubaker state, “The interaction between domestication and socialization best predicts the social phenotype an individual will display as an adult” ([6], p. 329).
Table 1. Definitions of key terms related to free-ranging cats (FRCs).
Social behavior can be defined as any interaction between two or more individuals of the same or different species [17][7]. These interactions are non-predatory and can be placed into several behavioral categories. These include affiliative behaviors, which are friendly social behaviors that function to form, maintain, or strengthen a social bond. Agonistic behavior is any social behavior related to aggression, submission, or threatening behavior [18][8]. Reproductive behaviors include any interactions related to mating such as courtship, mounting, and copulation. Caregiving behaviors include social behaviors related to the important survival interactions that occur between a queen and her kittens [19,20][9][10].
Although it may seem simple to assign behaviors to specific categories, some behaviors may cross into multiple categories [21][11]. For example, a social roll (rolling onto back, exposing belly to a social partner) could be considered either affiliative or submissive (see Figure 1a). In these cases, the category of the focal behavior will depend on the context of the behavior. For example, if allogrooming (grooming a social partner) occurs between a queen and her kitten, it would be considered caregiving, but if allogrooming occurs between adult conspecifics, it would be considered affiliative. Additionally some behaviors may initially appear to fall into multiple categories. This can be seen with several behaviors involved in play. Play behaviors may resemble aggression (e.g., biting or cuffing), but they can be distinguished as they are not done to their full extent and they are often preceded or followed by affiliative behavior (Figure 1b, discussed further below). In all, behavioral categories are not always clear-cut but can be clarified by examining the context in which they occurred. 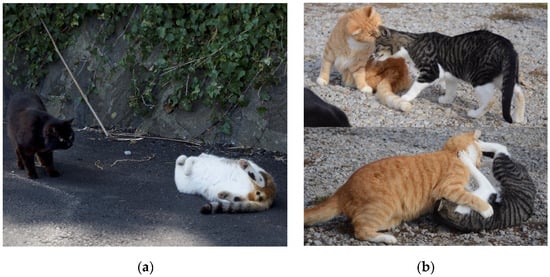 Figure 1. Photos of FRC social interactions taken by K. Vitale: (a) a social roll is displayed from one FRC to another; (b top) a male tabby cat rubs his head against an orange male as a greeting; (b bottom) interaction continues into play and full contact social play is seen between the dyad.
In many animal species, social relationships form between individuals with a history of interactions. In some cases an affiliative bond can form, defined as “long-term relationships established among individuals and characterized by high rates of friendly and peaceful interactions” ([17][7], p. 1). The idea that FRCs form social relationships has been debated and Spotte stated that FRCs “should be considered solitary—not social” ([5], p. 49). Therefore, the aim of this review is to explore the literature on the social behavior of free-ranging cats. This paper will discuss which social behaviors have been studied in FRCs and the main findings of each study in order to make conclusions about the social nature of FRCs.