Limitations of Electrospinning in GBR

Nanofibre-based membranes or scaffolds exhibit high surface-to-volume ratio, which allows an improved cell adhesion, representing an attractive subgroup of biomaterials due to their unique properties. Guided bone regeneration is a surgical procedure in which bone regeneration, due to bone atrophy following tooth loss, is “guided” by an occlusive barrier. New approaches such as multifunctional multilayering and coupling with bone promoting factors or antimicrobial agents, makes this technology very attractive also for bone regeneration procedures. The technical limitations of traditional electrospinning strategies for bone-tissue engineering applications might be critical for the preparation of three-dimensional scaffolds.

Limitations of Electrospinning in GBR

Clinical use of membranes for GBR, as well as for all the other tissue engineering applications/strategies, requires biocompatibility and non-toxicity of the used compounds. Given the wide use of synthetic polymers to overcome mechanical limitations of natural substances, biocompatibility and non-toxicity are imperative also for cross-linkers and antimicrobial agents (e.g., silver nanoparticles).

Synthetic polymers may fulfil the structural and mechanical requirements in biomedical applications thanks to their tunable physical and chemical properties [1]. Thanks to their excellent biomechanical property, in vivo thermal stability, and biocompatible properties, most studies have focused on PCL nanofibres. Despite their structural strength, nanostructured PCL membranes are not rigid and cannot be molded. Hence ELS membranes are not suitable for non-self-sustaining bone defects. Space-making is one of the structural characteristics that, nowadays, cannot be reached by conventional electrospun membranes. Among several alternatives to ELS, centrifugal spinning could also produce nanofiber-based implantable devices [88,89]. In this procedure, the polymer jet is stretched by the centrifugal force instead of the voltage. From one side, centrifugal spinning could compensate some disadvantages of the ELS process (improving the mechanical properties of the structures and the spinning speed, to name some). On the other hand, ELS technique involves a set-up which is more simple that the one required for the centrifugal spinning.

2. Limitations of Electrospinning in GBR

According to its clinical use, a membrane should be handleable easily with forceps, maintain its mechanical properties after wetting in biological fluids and also it should be resistant to the shear forces of the surgical suture thread (suturable) (Figures 15 and 26). Pull-out strength is an expression of mechanical properties of a biomaterial that in case of GBR setting is demanding. As an example, one main limitation of the PLGA/F127 membrane[2] was its relatively low suture pull-out strength and thus this membrane was not indicated for surgical applications in which sutures are needed[3]. To overcome this limitation, the authors published afterwards an augmented pull-out strength membrane, obtained adding PCL nanofibres to the solution. The PCL/PLGA membrane reached almost 8 N in the pull-out test, a result that is comparable with the gold standard Bio-Gide®, and to the benchmark threshold of 2 N (generally accepted for suturing during surgery)[4]. Moreover, when the PCL/PLGA membrane was soaked in saline solution, it showed a higher pull-out strength when compared to the wetted Bio-Gide®, which is more hydrophilic and, therefore, absorbent[5]. 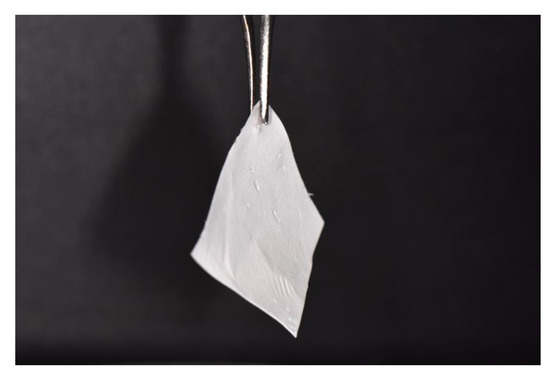 Membranes candidate for GBR should be carefully investigated in terms of permeability. This information is paramount to predict both the desired diffusion of nutrients and the undesired infiltration of host undesired cells (e.g., fibroblasts) through the structure. The albumin assay performed on the aforementioned membranes (PCL/PLGA) proved a similar, increase of permeability with time, when compared with controls (PCL/Tween 80 > Bio-Gide1 > PLGA/F127 > PCL/PLGA hybrid membranes) because of their hydrophilicity. Moreover the same paper provided an in vivo test of the bone regeneration capability. All the tested membranes in a calvaria bone defect rat model showed better results in bone regeneration when compared with the blank controls. Moreover, the PLGA/F127 > PCL/PLGA hybrid membranes showed a superior bone formation in terms of quantity and quality in respect to active controls. The common behavior found was a regeneration of bone starting from peripheric host bone allowed by the space making and selective permeability of the tested membranes, differently from the blank controls[5]. However, in vivo (with large size animal models) or human studies will clarify the role of dissolution time of the membranes in terms of mechanical performance that should be maintained at least for two months in the view of GBR applications.

In 2014, poly(butylene carbonate) (PBC) was tested as alternative of electrospun PCL for the production of membranes for GBR. In vitro and in vivo tests demonstrated similar behavior of the tested molecule to PCL; moreover a superior hydrophilicity was found for the PBC membranes. Interestingly, Young’s modulus of PBC and PCL membranes was 8.45 ± 0.93 and 9.91 ± 1.12 MPa, respectively; tensile strength was 3.53 ± 0.34 and 3.82 ± 0.36 MPa, respectively. This mechanical performance suggests a possible use in the field of GBR. Moreover, micro-CT images and histologic sections showed bone formation below both PCL and PBC membranes. Conversely, the blank control showed invasion of soft tissue in the calvaria defects in the murine model[6].

The choice of the right volatile solvent, mostly when natural polymer are used, is challenging. Reaching the proper evaporation of the solvents and obtaining nanofibres with homogeneous diameter and without defects represents a demanding task. To this end, a recently published paper found the best combination of solvents to face the dissolution of collagen and chitosan with hexafluoroisopropanol and formic acid respectively. The author successfully blended these two bioactive molecules demonstrating bone-promoting activity in in vivo tests[7].

Given the importance of pore dimension and density on cellular adhesion and differentiation, their modulation represents an important issue in membrane manufacturing. For bone tissues, the pore size of scaffolds is expected to fall in the range 100–500 μm [94,95]. Moreover, pore geometry influences cell morphology as well. In the conventional ELS set up, however, controlling pore dimension and distribution seems to be critical, according to the random deposition of the fibres on the collector. The use of structured collectors represents an easy way to generate greater pore size in electrospun scaffolds. Some authors report that this kind of collectors could positively affect the obtained structures essentially acting as a guided template that influences fiber collection during the deposition of polymers[8][9].

More recent attempts of developing an expanded 3D scaffold, that simulates more closely the extracellular matrix (ECM), have been performed using an aqueous sodium borohydride (NaBH4) solution. This treatment and the use of predesigned molds allowed a better control of the shape of the resulting scaffold. However, this method is not ideal as it requires the use of aqueous solutions, chemical reactions, and freeze-drying process that may interfere with polymers that are soluble in water [98]. Expansion of electrospun membrane has been recently studied with the use of the depressurization of subcritical CO2 fluid. The paper recently published by Keit and coworkers highlights how a traditional bidimensional nanofiber membrane may be transformed into a three-dimensional scaffold with desired thickness, gap distance, and porosity, to allow cell seeding and proliferation[10].

The technical limitations of traditional electrospinning strategies for bone-tissue engineering applications might be critical for the preparation of three-dimensional scaffolds[11][12]. There have been many attempts in the fabrication of 3D porous nanofibres scaffolds: for example, Song et al. described the preparation of a 3D porous scaffold via a layer-by-layer assembly of PCL nanofiber-based sheets prepared by electrospinning of PCL on a stainless steel 3D mesh[13]. By contrast, other techniques of casting or direct writing are already effective in the three-dimensional manufacturing of scaffold. For 3D scaffold production with ELS, a schematic illustration is provided (Figure 1 of the paper) by Yinxian and coworkers[14].

It can be stated that traditional ELS alone is an elective technology for membrane generation rather than for 3D scaffold but it can be combined with other scaffold preparation technologies for the production of 3D structures implemented with nanofibres.

Finally, the safety of the technical staff is mandatory during the utilization of an ELS device. The use of high voltage supply, together with the use of potentially toxic solvents may expose the personnel to chemical and physical risk[15].

A conventional laboratory set up of electrospinning device is quite cheap for membrane production, as well as the costs of the most commonly used polymers. However, the system shows a low production efficacy: the spinning of a few grams of polymer may take several hours. In a commercial setting this could be a critical issue that might be overcome only with an upgrade of the ELS setup (e.g., increasing the number of syringes) rather than the process itself.