Merkel cell carcinoma (MCC) is an uncommon type of skin cancer with poor prognosis. It is seen predominantly in old age in sun-exposed body areas. Racial and geographical differences are seen in its occurrence. Viral infection and radiation exposure are the two leading factors implicated in its causation. Small, firm to hard nodule (usually in sun-exposed areas), red with a history of a rapid increase in size is a common personation of the disease. Other body parts such as upper limbs, trunk, and even lower limbs may be also involved. The disease is diagnosed by taking a tissue sample (biopsy) for examination, and other radiological investigations are needed to reach a proper diagnosis with the staging of the disease. There are various treatment options including surgery, radiotherapy, and chemotherapy. Surgery is the primary treatment option though some patients may not be the candidates for operation where other treatment options come into play.

Merkel cell carcinoma (MCC) is an non-prevalent, rapidly growing skin neoplasm initially described by Cyril Toker in the year 1972. The “cell of origin” of MCC is yet to be fully substantiated. Based on the similarities in biology and morphology of the ‘Merkel cells’ (MC), which are epidermal cells with both epithelial and neuroendocrine attributes and MCC, it has been postulated to arise from the MCs and is thus occasionally described as neuroendocrine carcinoma of the skin [1,2,3,4,5,6,7,8][1][2][3][4][5][6][7][8]. Epidermal stem cells, dermal fibroblasts, B cell precursors, and neuronal precursor cells have all been proposed as possible cells of origin for MCC [8]. Though MCC can involve any anatomical part/region in the human body, it occurs predominantly in the solar unshielded body parts in older males, with numerous studies substantiating the effects of long-term ultra-violet radiation exposure [3,4][3][4]. Most importantly, MCC is strongly associated with immunosuppression, both iatrogenic and age-related [4,5,6,9,10,11,12,13,14][4][5][6][9][10][11][12][13][14]. It is frequently associated with regional lymphadenopathy and disseminated disease can spread to many parts of the body. The high mortality rate renders it twice as deadly as melanoma [3,4,15][3][4][15].

The etiopathogenesis of MCC involves an intricate mutual interaction among various intrinsic and extrinsic factors and influences. Although the specific cause is yet to be determined, two aetiologies that have been widely discussed and postulated include viral oncogenesis and radiation [3,6,9,15][3][6][9][15]. The identification of MC polyomavirus (MCPyV) in most tumor specimens by Feng et al. proved to be a landmark study in our understanding of its biology. Furthermore, a study by Touzé A et al. in 2009 confirmed this association of MCPyV with MCC [16,17][16][17]. While the precise mechanisms by which MCPyV promotes tumorigenesis are debatable, the expression of MCPyV early region genes plays a critical role in oncogenesis. UV radiation appears to synergize with MCPyV to promote tumorigenesis, and it has been suggested that mutations to the viral genome promote viral integration and tumorigenesis [5]. Notably, psoriasis patients on phototherapy treatment are 100 times more predisposed to develop MCC, and correlations between MCC and radiation index and decreased skin pigmentation have been noted [15,16][15][16]. Accordingly, the predominant, but not exclusive, sites of involvement are exposed parts including the head and uncovered areas of the upper limbs (Figure 1) [17,18,19][17][18][19]. A compromised immune system is also a well-established risk factor for MCC; iatrogenic immune suppression, lymphoproliferative disorders such as chronic lymphocytic leukemia, autoimmune disorders, organ transplant candidates, and acquired immunodeficiency syndrome are known to increase the likelihood of MCC [18,19,20][18][19][20]. The high prevalence of MCC in older patients suggests that immunosenescence may contribute as well [5,6][5][6]. 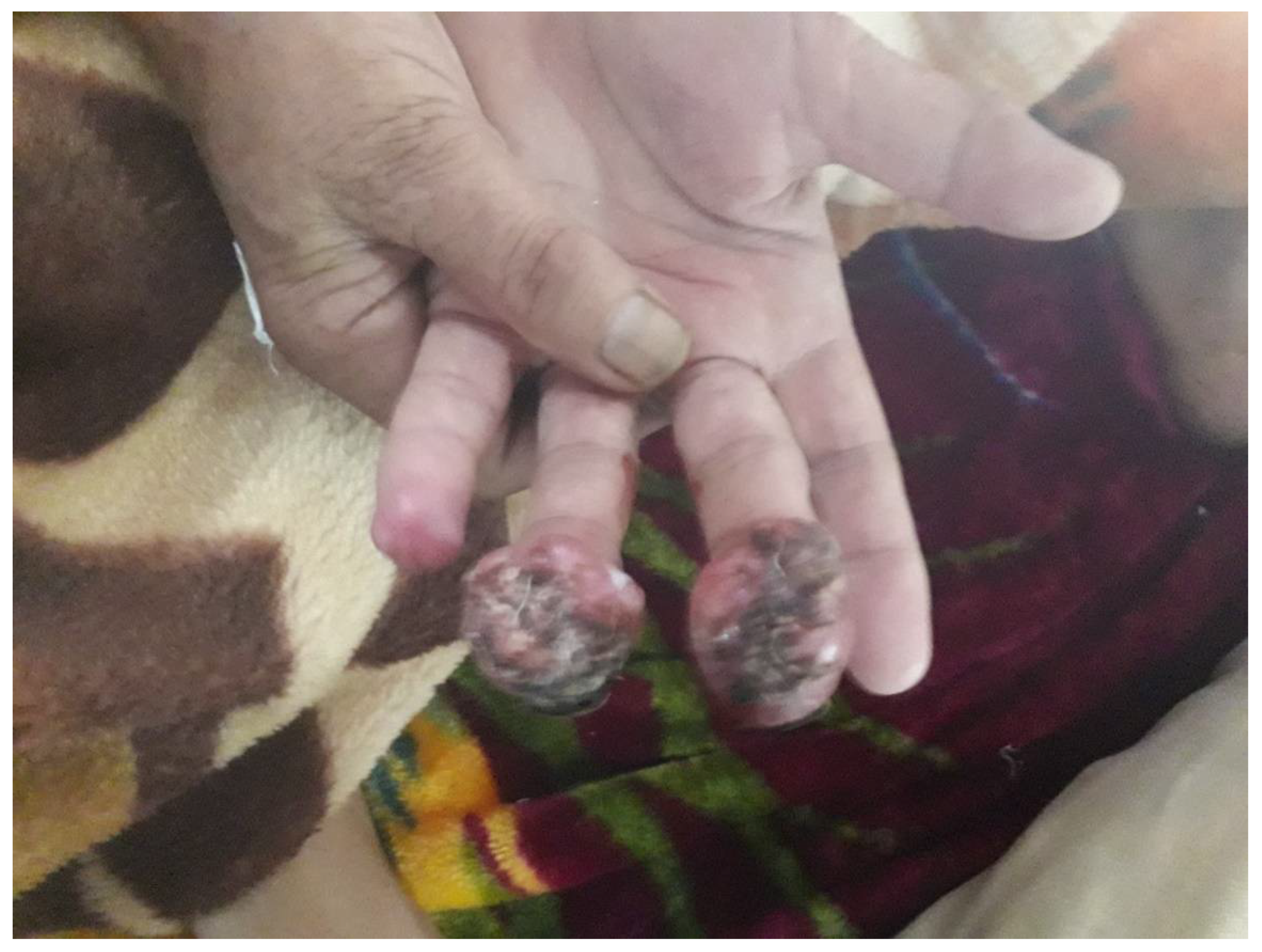 Figure 1. Merkel cell carcinoma involving the middle and ring fingers of the left hand of a 76-year-old female.
MCC occurs less frequently than melanoma, squamous, or basal cell cancers [16]. Although the incidence appears to be increasing in the previous few decades, the rarity of the tumor hinders the assessment of the true incidence. Improved diagnostic techniques, a growing elderly population, and an increase in the number of immune-compromised patients may all be contributing to the rise in incidence [2,21][2][21]. Incidence rates vary across different parts of the world. As is true for other UV radiation-induced cutaneous malignancies, Australia tops the list with the incidence of 16 cases per million population [15]. Notably, the incidence of MC Polyoma virus-positive cases is low in Australia [11]. The age-adjusted annual incidence from the United States, Europe, and Australasia lies between 0.1 and 1.6 per 100,000, with the number of cases reported from Asia the lowest [3,15][3][15]. In the United States, about 1600 new cases are detected every year [5,6,9][5][6][9]. The frequency of MCC differs among varied ethnic clusters and regional zones-prevalence being 25 times higher in the white population than dark skin types. The classic patient is an elderly white man aged above 70 years with a history of prolonged sun exposure [15,22][15][22]. The age-adjusted incidence rate is 8 times lower in the black populace [5,9,15][5][9][15]. Most studies confirm that males outnumber females; with some demonstrating a gender ratio of up to 2:1. However, though some small studies have demonstrated either not predilection or a slight female preponderance [17,22][17][22]. Females tend to be older than males at presentation (76 years vs. 71 years) [13]. The lesions are mostly encountered in the head with the trunk the favored location in younger patients and lower limbs in African Americans [5]. Following past studies, the mean age at diagnosis in most recent studies is reported to be 74.9 years. It is extremely rare in children and young people, being 24 times more common after 65 years of age and only 5% diagnosed before 50 years. Two studies (one from New Zealand and another US-based) demonstrated an enhancement in the age-specific incidence in old age group patients when compared with a younger group [6,22][6][22].

Depending upon the clinical stage, comorbidities, and performance status of the patient, multimodality management protocols consisting of extirpation of the primary lesion, regional lymphadenectomy with radiotherapy/chemotherapy is being employed as the optimal treatment. However, at present, there is debate on the most efficacious treatment scheme for the advanced disease; moreover, it should be distinguished from nodal only MCC, which is thought to be MCC with spontaneous resolution of the cutaneous lesion [9,10,11][9][10][11]. Operative management is the gold standard for localized or locoregional disease. Wide excision with a margin of 1–2 cm (1 cm for <2 cm tumor size and 2 cm for >2 cm ones) is usually recommended [15,20][15][20]. Surgery resulting in positive margins is a candidate for re-excision. In sites where tissue sparing is critical, Mohs microsurgery may be an option, but lack of unanimity precludes its utility. Lymph node dissection followed by radiation is the standard treatment for Stage III disease. SLNB is typically recommended at the time of the primary surgery for the cases without nodes on clinical examination. For those with positive SLNB, elective lymph node dissection (ELND) with radiation is the norm [13,20][13][20]. Radiotherapy (RT) is utilized both as an adjuvant to surgery and as a monotherapy in those in whom surgery is not conducive or suitable, e.g., an elderly patient with a plethora of comorbidities with high risk for anesthesia/surgery. Most frequently, it is employed for the locoregional control of the disease. Most literature suggests that recurrence rates are considerably reduced with adjuvant RT, which has better results than adjuvant chemotherapy [58,59,60,61][23][24][25][26]. The cumulative radiation dosage regimen for the primary site ranges between 50 and 56 Gy for margin negative surgery with dosage enhancement up to 60 Gy for positive histological margins and a maximum of 66 Gy for gross disease (standard fractions ranging from 1.8 to 2 Gy per session) (Table 31) [58][23].
Table 31. Radiotherapy dose guidelines for Merkel cell carcinoma [67][27].
[67,69,71,72][27][29][30][31].
Abbreviation: SLNB, sentinel lymph node basin.
Radiation monotherapy has most commonly been reported in head and neck tumors [59][24]. Ott et al. [66][28] reported a prolonged remission in four such patients. Similarly, Lawenda et al. concluded that radiation to the primary tumor bed, either definitive or as an adjuvant following resection, could produce a local control rate exceeding 90% [61][26]. Mortier et al. demonstrated the validity of managing inoperable cases by RT alone, with the results at least equal to ones managed by surgery and radiotherapy [60][25]. In addition, good results have been witnessed with single-fraction radiation therapy in metastatic tumors. It reduced the tumor burden with durable palliation and limited side effects [12,13,14,15,16][12][13][14][15][16]. Palliation of bone metastases and other extracranial metastatic sites can be achieved with 10 fractions of 3 Gy each and/or a single 8 Gy fraction. The University of Washington reported complete responses in 45% and local control in 77% cases of metastatic tumors when treated with a single 8 Gy fraction [58][23]. Though MCC is generally regarded as a chemotherapy-responsive tumor, results are hardly ever durable. There are no documented favorable results and clear benefits with the use of chemotherapeutic regimens. It is typically reserved for palliative therapy in stage IV disease where other treatments have failed. Cytotoxic chemotherapies tend to increase morbidity and reduce the quality of life with their associated immunosuppression and toxicity. Resistance to chemotherapy on recurrence is another drawback. Usual drug regimens comprise cisplatin/carboplatin with etoposide/topotecan [12,13,14][12][13][14]. Immunotherapy has materialized as a promising management tool for advanced MCC. Various research papers have corroborated the association of immune status to clinical outcomes, opening the way for beneficial effects of cell-mediated immunity [67][27]. Three antibodies targeting the PD-1 axis have been extensively studied, with all exhibiting significant response rates and good response durability (Table 4).
Table 4. Immune checkpoint inhibitor trials in advanced Merkel cell carcinoma
Abbreviations: IV = Intravenous; ORR = Objective response rate; N/A = Not available.

Although substantial insight into the pathogenesis and advancements in the treatment protocols have been achieved in the recent past, mortality rates and projections have improved little in advanced-stage disease. The tumor stage at the time of presentation is still the most dependable prognostic predictor. Multiple management modalities must be tailored to minimize morbidity while maximizing the chances of survival. The continued development of well-tolerated immuno-therapies with acceptable side effects profiles may improve treatment options for patients with recurrent or persistent disease. Despite the increasing incidence, few institutions manage enough patients that they can effectively analyze the data regarding the efficacy and safety of different treatment options on their own. Hence, prospective, multicenter, randomized case-control studies should be considered to continue to refine and standardize treatment guidelines.