Ferroptosis, an iron-dependent form of regulated cell death characterized by the accumulation of lipid peroxidation, has been reported to regulate tumorigenesis, metastasis, drug resistance and the immune response. However, the potential roles of ferroptosis regulators in the progression of bladder cancer (BLCA) remain unknown. We systematically evaluated the multidimensional alteration landscape of ferroptosis regulators in BLCA and checked if their expression correlated with the ferroptosis index. Using least absolute shrinkage and selection operator (LASSO) regression and multivariate Cox regression, a seven ferroptosis regulator signature was constructed. We validated the prognostic and predictive accuracy of this signature in five independent datasets and established a nomogram to predict the overall survival (OS) and risk of death of BLCA patients. Moreover, the risk score was associated with tumor progression and antitumor immunity-related pathways. Furthermore, the relative antitumor immune cell infiltration level was negatively correlated with the risk score, and the tumor mutation burden was higher in the low-risk group, which might be useful for predicting immunotherapy efficacy. The Tumor Immune Dysfunction and Exclusion (TIDE) database and IMvigor210 cohort with immunotherapy efficacy results were used to confirm the prediction function of the risk score. Furthermore, the ferroptosis regulator signature could also reflect the chemotherapy sensitivity of BLCA. Ferroptosis might play a role in precision individualized chemotherapy and immunotherapy. This woentrky highlights the crucial clinical implications of ferroptosis and will help with developing personalized therapeutic strategies for BLCA patients

Bladder cancer (BLCA), an aggressive and highly recurrent tumor in the urinary system, causes high morbidity and mortality rates [1]. According to the 2015 China cancer statistics, there were approximately 80,500 new cases and 32,900 deaths from BLCA in the past few years [2]. Based on histological differentiation and whether the tumor cells are found in the muscle layer, we can divide bladder tumor into low- and high-grade or nonmuscle-invasive and muscle-invasive subgroups, respectively, which have different prognoses and metastatic risks [3][4]. Although well-established operative treatment and chemotherapy options have allowed many cases of BLCA to have a good prognosis, the recurrence and metastasis of BLCA are major causes of treatment failure. Therefore, the specific mechanisms leading to the progression and metastasis of BLCA still need deeper exploration and research to offer reliable theoretical evidence for healing this type of cancer near future.
It is widely reported that programmed cell death, like apoptosis and autophagy, owns a crucial role in tumorigenesis, metastasis and oncotherapy [5][6][7]. The role of apoptosis or autophagy in BLCA has been well elucidated, and therapeutic methods based on inducing this way of cell death, for example cisplatin and gemcitabine, have achieved tremendous clinical benefits [8][9]. Ferroptosis featured by the stock of lipid peroxidation, is different from traditional apoptosis, autophagy or necrosis [9][10]. In recent years, induction of cancer cell death through triggering ferroptosis might be an alternative treatment to malignancies resistant to traditional therapies [11][12]. In particular, the role of ferroptosis in cancer immunotherapy has been gradually discovered and thoroughly investigated [13

To obtain the genetic alterations of ferroptosis regulators in BLCA, the prevalence of nonsilent somatic mutations was assessed in TCGA. Among the 412 BLCA samples in TCGA, 333 (80.83%) had mutations in ferroptosis regulators (Figure 1A). Among them, the mutation frequencies of TP53 and ATM were the highest for the ferroptosis driver genes, and RB1 and CDKN1A were the highest for the ferroptosis suppressor genes. However, the mutation frequency of marker genes was relatively low in bladder cancer. Moreover, we examined copy number alterations of these regulators and found AKR1C1/2/3, MUC1 and YY1AP1 owned a lot of copy number variation (CNV) gain, while CDKN2A, RB1 and ACSL3 owned the highest frequency of CNV loss (Figure 1B). 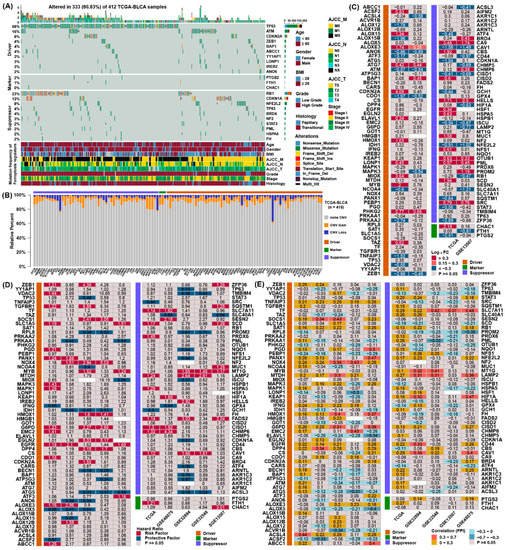 It applied the Lasso algorithm to recognize a set of 23 candidate prognostic ferroptosis regulators (Figure 2A,B), and after that it implemented multivariate Cox regression analysis to construct a prognostic signature for the training cohort (Figure 2C, Table S4). Moreover, it calculated the risk score of each patient. On the basis of the best cut-off point of the risk scores, it assigned all samples to high-risk and low-risk groups separately. The patients owning low-risk scores have better survival results than the patients from higher risk score group (Figure 2D), The AUC of the signature was 0.7, 0.697 and 0.737 for survival outcomes of 3, 5 and 10 years, respectively (Figure 2E). Additionally, cancer-associated death rose and the number of surviving patients fell with risk score enhanced. In addition, it use heatmap to present the expression value of every candidate gene in the formula which is associated with the risk score (Figure 3F–H). It also evaluated the relationship between the risk score and the expression of all ferroptosis regulators (Figure 3I), and it discovered other regulators, such as SLC7A11, were also potential regulators associated with the risk score. 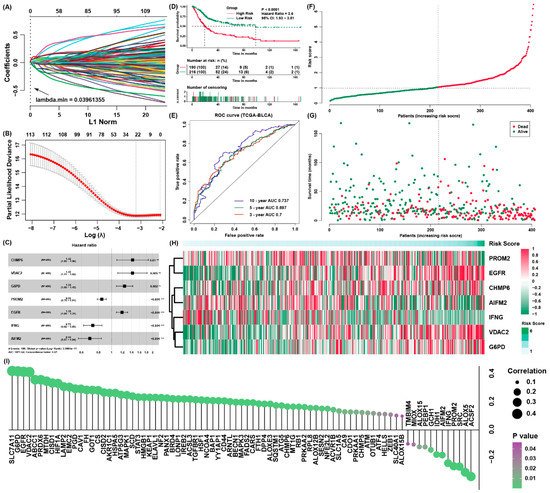 Figure 2. Construction of a ferroptosis regulator signature of BLCA. (A,B) The LASSO model and the LASSO coefficient profiles are presented; (C) independently prognostic parameters of the ferroptosis regulator signature; (D) the survival curves of the low-risk and high-risk group; (E) the ROC curves for overall outcomes of three, five and ten years; (F) the risk score distribution in the patients with BLCA from TCGA; (G) the vital status of patients from different group of risk scores; (H) the heatmap for the expression of genes in the signature; (I) the possible correlation between the expression of ferroptosis regulators and the risk score. 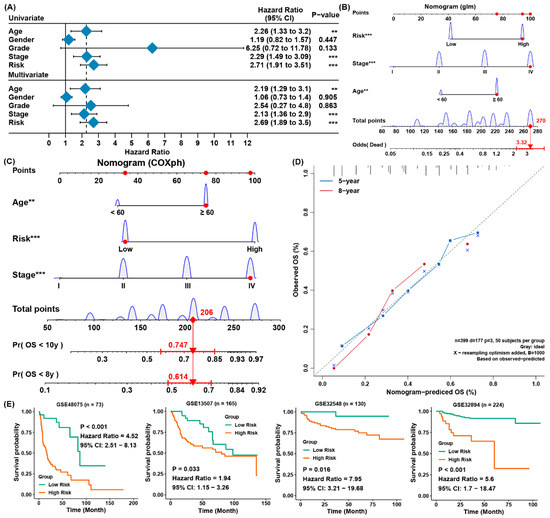 Figure 3. Establishing a predictive nomogram and external verification. (A) Univariate and multivariate Cox analysis of clinical parameters and risk scores with outcome of overall survival of the patients with BLCA from TCGA; (B) the nomogram to predict the rates of death of patients with BLCA; (C) the nomogram to predict overall survival outcomes of BLCA patients for five and ten years; (D) the calibration curve to evaluate the accuracy of the nomogram constructed based on gene signature; (E) verification of the ferroptosis-associated gene signature in four external cohorts from GEO. ** p< 0.01, *** p < 0.001.

4. The Establishment of a Predictive Nomogram and External Testification

For the sake of forecasting the survival possibility of patients with BLCA, it constructed a nomogram considering clinicopathological covariates. Through the univariate and multivariate Cox regression analysis (Figure 3A), the nomogram predicted the death odds of patients (Figure 3B) and predicted the overall survival rates for five and 10 years (Figure 3C). In contrast to the ideal model, the calibration plot predicting OS outcomes for five and 10 years have relatively good results (Figure 3D). Moreover, the four external verification groups GSE32894 GSE48075, GSE13507, and GSE32548 were also employed for the same analysis, and the risk scores were also computed according to the same signature. Compared to the patients from low-risk group, patients from the high-risk group owned a greatly lower OS rate (Figure 3E). This was in accordance with the those results of the training set, indicating the ferroptosis-associated gene signature was able to precisely forecast the survival of patients with BLCA.