Abnormal mosaicism is the coexistence of cells with at least two genotypes, by the time of birth, in an individual derived from a single zygote, which leads to a disease phenotype. Somatic mosaicism can be further categorized into segmental mosaicism and nonsegmental somatic mosaicism. Acne is a chronic illness characterized by inflammatory changes around and in the pilosebaceous units, commonly due to hormone- and inflammatory signaling-mediated factors. Several systemic disorders, such as congenital adrenal hyperplasia, polycystic ovarian syndrome, and seborrhoea-acne-hirsutism-androgenetic alopecia syndrome have classically been associated with acne. Autoinflammatory syndromes, including PAPA, PASH, PAPASH, PsAPASH, PsaPSASH, PASS, and SAPHO syndromes include acneiform lesions as a key manifestation. Mosaic germline mutations in the FGFR2 gene have been associated with Apert syndrome and nevus comedonicus, two illnesses that are accompanied by acneiform lesions.

Mosaicism has traditionally been defined as the abnormal co-occurrence of at least two genotypes in a living being derived from a single zygote. However, recent studies have proven that mosaicism also occurs naturally as a physiological phenomenon [1], mainly due to a strikingly high but normal postzygotic mutation rate in utero, and variable somatic mutations throughout life [2]. Therefore, a more accurate definition of abnormal mosaicism is the co-occurrence of cells with at least two genotypes, present at birth, in a living being derived from a single zygote, which leads to a disease phenotype [3].
Mosaicism has frequently been classified in clinical genetics textbooks into three categories based on inheritance potential, namely somatic only, gonadal only, and both somatic and gonadal. Other classifications of mosaicism include two major subtypes, genomic and functional. Mosaicism, which is genomic in nature, is caused by a de novo change in the DNA sequence, giving rise to a genetically heterogeneous organism. Epigenetic mosaicism is the result of alterations which do not entail changes in the DNA sequence. This type of mosaicism is passed on from one cell generation to the next. The concept of mosaicism provides an explanation for why many mosaic disorders recognized in dermatology appear to be sporadic [1][3][4][5][1,3,4,5].
With genotypic diagnosis, many phenotypic clinical pictures are now being found to be part of a disease spectrum [6][7][6,7]. This spectrum is generally far greater in mosaic disorders than in germline disorders, simply because there are more factors that play role in affecting the ultimate phenotype. The terminal embryonic destination of the mosaic mutation and the onset of disease are somewhat linked, and, in general, earlier mutations will produce a more severe phenotype and will be more likely to be associated with non-cutaneous features. Other factors that alter phenotype include the exact mutation, with clear phenotype–genotype associations demonstrated in some conditions, the background germline genotype, and the normal function of the gene [8][9][10][11][12][8,9,10,11,12].

Acne is a chronic illness [13][14][28,29], leading to changes in sebum quantity and release of lipid fractions, altered keratinization, and resulting bacterial colonization, such as with Propionibacterium acnes (P. acnes) and Staphylococci [15][16][30,31]. It most often affects hair follicles on the face, neck, chest, and back [17][18][32,33].

Risk factors for the development of acne include a family history of severe acne, the polycystic ovary syndrome (PCOS), the metabolic syndrome, and rare genetic conditions (e.g., Apert syndrome) [19][20][38,39]. The increased risk of developing acne in the presence of a positive family history ranges from 2.30 to 4.69 [21][40]. Familial clustering was evident in a retrospective study of 1557 pairs of monozygotic and dizygotic twins living in the UK [22][41]. The severity of acne, magnitude of sebum production and inflammation, extension of the disease, regional variations, clinical course, and response to treatment are influenced by genetic factors, such as family history of acne, as well as early onset of comedonal acne [17][23][32,42].

Follicular hypercornification through direct and indirect modulation of the innate immune system has been connected with changes in sebum lipid composition [24][48]. Sebaceous glands and sebum lipids are optimal anaerobic grounds for P. acnes activation [25][49]. Lipases produced by P. acnes hydrolyze triglycerides into pro-inflammatory free fatty acids as sebum passes through the follicular duct [26][27][28][50,51,52]. The binding of TLR2 and TLR4 on sebaceous glands by P. acnes triggers sebocyte production of antimicrobial peptides (human β-defensin (hBD)1 and hBD2) and inflammatory cytokines (tumor necrosis factor (TNF)α, IL-1α and IL-8) [29][30][44,53]. Moreover, various mechanisms of insulin-like growth factor (IGF)-1 may aid the emergence of acne, such as through increased androgen stimulation and the disinhibition of the forkhead box (Fox)O1 transcription factor, leading to further activation of the androgen receptor (AR).

Since family history of acne is a risk factor that predisposes an individual to develop the condition, genetics may play a pivotal role in the pathogenesis. Several theories have been proposed with regards to genetic causes, such as decreased CAG repeats in the AR, particularly in Asian individuals [31][32][33][61,62,63], polymorphisms in genes such as those for TNFA, TNFR2, TLR2, IL1, CYP1A1, CYP17–34T/C, CYP21, and somatic mutations in FGFR2 [34][35][36][37][38][39][40][41][42][64,65,66,67,68,69,70,71,72]. Of the four known fibroblast growth factor receptors (FGFRs), i.e., FGFR1–4, the epidermis expresses FGFR1 and FGFR2. FGFR2 is the gene encoding this family of related but individually distinct tyrosine kinase receptors. This receptor is alternatively spliced into two isoforms, FGFR2b and FGFR2c [43][44][73,74]. These have exquisite ligand specificity and are expressed in either epithelial (FGFR2b) or mesenchymal cells (FGFR2c) [44][45][46][74,75,76]. FGFR2b is an essential component in embryogenesis of the skin and is expressed by the epidermis, hair follicles, and sebaceous glands [47][77]. Its continued presence is necessary for the long-term survival of sebocytes, whereas its deletion leads to sebaceous gland atrophy [23][42]. FGFR2 mosaicisms, which may be associated with epithelial dysregulation resulting in cancers of the breast, uterus, and skin, have been identified in a localized acneiform naevus in a single individual [34][48][64,78]. The germline mutations of adjacent amino acid residues of FGFR2, either S252W or P253R, cause Apert syndrome, an autosomal dominant condition characterized by severe acne and stereotypical craniofacial and limb abnormalities [34][49][50][51][52][64,79,80,81,82]. These gain-of-function mutations are localized in the linker region between D2- and D3-immunoglobulin-like regions of the FGFR2-ligand-binding domain [52][82]. The resulting mutation causes inappropriate receptor activation due to loss of ligand specificity for both the FGFR2b and FGFR2c isoforms, leading to follicular keratinocyte proliferation, sebaceous lipogenesis, and inflammatory cytokine response [52][53][54][55][56][82,83,84,85,86]. FGFR2b is exclusively expressed on epithelial cells, whereas FGFR2c is only expressed on dermal and mesenchymal cells [57][87].

Systemic endocrine/immunological disorders and syndromes such as congenital adrenal hyperplasia (CAH), PCOS, seborrhea-acne-hirsutism-androgenetic alopecia (SAHA) syndrome, primary ovarian insufficiency, and many others have classically been associated with acne [57][58][87,94] (Table 1). These conditions should raise suspicion and considered as plausible diagnoses when patients present with sudden, severe, and/or treatment-resistant acne, both in childhood and adulthood. Moreover, acne that presents with other signs of hormonal imbalance, such as hirsutism, irregular menstruation, altered libido and insulin resistance, should raise clinical suspicion of an acne-associated syndrome [57][58][87,94].
Table 1. Syndromal acne.
68][69][70][135,136,137] (Table 23).
Table 23. Acneiform eruptions not being part of a systemic disease or syndrome.

The manifestation of acne/acneiform lesions in numerous diseases/syndromes of varying etiology highlights the multifaceted nature of acne [13][14][57][58][66][67][28,29,87,94,102,124]. Since not all eruptions that resemble acne also represent acne vulgaris, awareness of diseases is essential, which can neither be classified under acne nor are part of a systemic disease or syndrome [

Acne represents a cardinal skin manifestation in several groups of diseases. It is present in endocrine/immunological syndromes, autoinflammatory syndromes, and certain mosaicisms, indicating that it is an intriguing model for studying the interactions among hormones, innate immunity, inflammation, wound healing (scarring), and gene mutations (Figure 18). Exploring possible common mechanisms of acne induction in various acne-associated diseases and syndromes—including mosaicisms—might contribute to the development of novel therapeutic regimens. 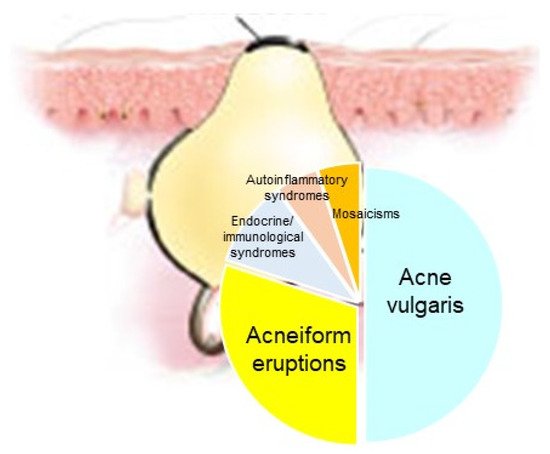