Loss aversion refers to the asymmetric evaluation of positive and negative changes with respect to a reference point, for example ownership [24][15]. The well-known endowment effect—a higher reluctance to give up a good than the willingness to acquire that good—is an example of loss aversion [51,52][16][17]. With respect to satisfaction, these changes do not refer to changes in ownership (acquisition or forfeiture), but rather to changes in the perceived quality of product attributes when compared with previously held expectations. Brenner et al. [53][18] refer to such changes as valence gains and valence losses, with consequent asymmetric evaluations. In Oliver’s model [23][19], the reference points that are used to evaluate product performance are referred to as expectations. Expectations can be either holistic—those which refer to the product as a whole—or differentiated—those referring to product attributes. An example of the use of holistic expectations is by Yan and Bao [54][20], who studied dwellers’ opinions about housing after their relocation as a global evaluation. Worse-than-expected outcomes had a larger negative effect on housing satisfaction than the positive effects of better-than-expected outcomes, thus indicating an asymmetry of valence gains and valence losses. Mittal et al. [10][21] were the first to examine positive and negative disconfirmation in regard to car attributes in a consumer survey. In their study, the asymmetric effect of disconfirmation—which was measured as a car’s performance being better, the same or worse than expected—on satisfaction with the car was confirmed for each of the car attributes. However, they did not classify their attributes into meaningful categories. Although this research showed that positive attribute expectation disconfirmation has different effects on consumer satisfaction than negative disconfirmation, the differences in size between the asymmetric effects across the product attributes were left unexplained. Mittal et al. [10][21] concluded that there is a need to develop an attribute typology that explains the asymmetry between the effects of gains and losses on consumer satisfaction, which was also the aim of our study. More specifically, we assumed that an attribute’s evaluability moderates the effects of that perceived attribute’s performance, as well as the attribute’s expectation disconfirmation. Moreover, we expected that these moderating effects would be different for positive and negative attribute disconfirmation. Figure 1 shows a summary of the expected theoretical relationships. Perceived attribute performance has a positive effect on consumer satisfaction, which is moderated by attribute evaluability, such that performance has a more positive effect for easy-to-evaluate attributes than for difficult-to-evaluate attributes. Positive (negative) attribute expectation disconfirmation has a positive (negative) effect on consumer satisfaction, with the moderating effects of evaluability being unknown. 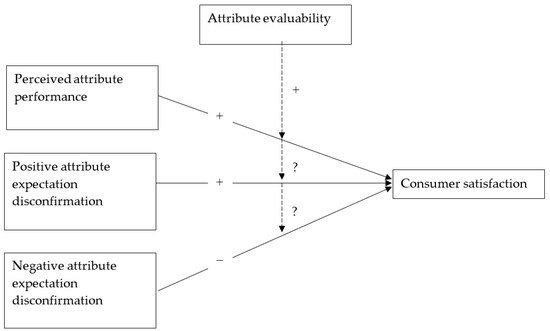 Evaluability has been defined as the degree of perceived ease of evaluating an attribute’s quality [5][22]. In order to measure how easy or difficult it was for respondents to evaluate the aspects of their phone, the following question was asked: “How was evaluating the following aspects of your phone for you? (1) very difficult–(7) very easy.”This question was asked for each of the 15 phone attributes taken both from the pilot study and from ACSI [62][23].

As recommended by Oliver [63][24], the questions regarding satisfaction were posed at the end of the survey to avoid an effect of these questions on the questions about expectations and performance. In order to measure consumer satisfaction, Oliver [63][24] suggested asking about whether the object has met one’s expectations or not, and whether one is content or not with the object. We asked: “To what extent has your current phone met your expectations? (1) this phone has not met my expectations at all–(7) this phone has completely exceeded my expectations,” and “To what extent are you content with your phone? (1) I am not at all content with my phone–(7) I am really content with my phone.”

Since most studies on evaluability have been conducted in the laboratory, our field study is relatively unique in showing its effects on consumer satisfaction in real life [54,78][20][29]. Hence, our findings have implications for consumer product manufacturers, at least in the case of mobile phones. It appeared that attributes such as the service, battery quality, and durability of the phones were relatively difficult to evaluate for consumers, and negative disconfirmation concerning these attributes negatively affected satisfaction. Both product experiences and marketing activities may shape consumer expectations [79][30]. For example, bad consumer experiences may lead to low expectations at the time of repurchasing, whereas advertising and word-of-mouth might change these expectations, even after a bad product experience. With the current ability of companies and consumer agencies to analyze large datasets, it might even be possible to manage expectations based on consumer experiences. For example, consumers who report a defect in a product might be given information about the new model which does not have that defect. In our survey, durability seemed to be the most difficult-to-evaluate attribute. At least some information about the durability of a product may be made available, for example, that which concerns the statistical distribution of ownership time before product replacement. Such information could be easily gathered and estimated from consumer surveys [25][31]. With more accurate information about durability, consumers may be able to make better decisions concerning the lifetime of their mobile phones, which could reduce negative expectation disconfirmation, and possibly contribute to more sustainable mobile phone acquisitions.