Inner ear malformations are a spectrum of congenital anomalies involving the inner ear structures with an emphasis on the cochlea due to their implications for sensorineural hearing loss.

Inner ear malformations are estimated to be present in around 20% of patients with congenital sensorineural hearing loss [1].

The relationship between inner ear anomalies and hearing impairment has been known since the first anatomical report in 1791 by Carlo Mondini, of Italy, and many distinct malformations have been described in the last 230 years [2].

In recent years, the increasing availability of genetic consultation and testing has provided new data about the possible connection between inner ear malformations and genetic anomalies. In addition, the evolution of neuroradiological imaging with new computed tomography (CT) methods and magnetic resonance imaging (MRI) provided new data about syndromic patients. Indeed, in some syndromes, the well-known presence of hearing loss has been associated with the presence of inner ear malformations, in some cases extremely specific ones.

Table 1. Summary of syndromes and genes related to each inner ear malformations.

2. Cochlear Aplasia (with and without a Dilated Vestibule) 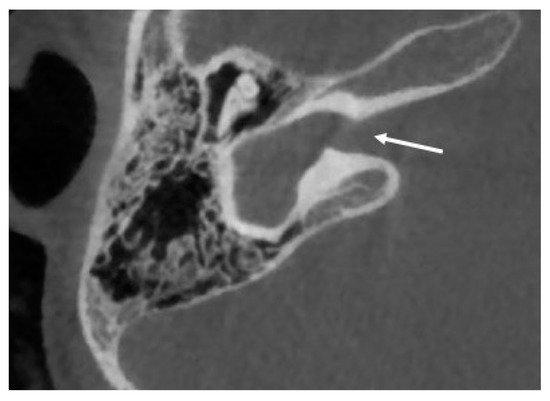 Figure 1. CT imaging of a cochlear aplasia with dilated vestibule. In contrast with a common cavity, the whole cochleovestibular structure is behind the axis of the internal auditory canal (white arrow).

Two subtypes can be identified of this anomaly: with and without dilated vestibule [1]. This malformation causes a profound sensorineural hearing loss. The possibility of cochlear implantation is controversial.

No specific gene mutations responsible for cochlear aplasia are reported in the literature, but PAX genes were supposedly involved in the development of the inner ear from experimental studies on animal models, in particular anomalies in gene PAX2 [4].

Recently, a de novo missense variant [p(Asn174Tyr)] in the DNA-binding homeodomain of SIX1 was identified in a single patient with bilateral hearing loss due to cochlear hypoplasia and cochleovestibular nerve abnormality. This gene was previously associated with autosomal dominant hearing loss and branchio-oto-renal or branchio-otic syndrome [8].

Studies conducted on mice showed that mutations in CHD7, a gene mutated in human CHARGE syndrome, lead to cochlear hypoplasia [9], while humans with CHARGE syndrome frequently present different anterior [10] and posterior labyrinth anomalies [11]. In addition, the ablation of TBX2 from the otocyst leads to cochlear hypoplasia in mouse models [12].

The abnormalities of the posterior labyrinth are a wide spectrum of anomalies not fully characterized yet. The anterior labyrinth has always captured most of the attention because of the impact of a congenital hearing loss in the neuro-psycho-social evolution of human beings. On the other hand, motor and balance development seems to be less affected by congenital anomalies of the posterior part of the labyrinth because of the possible compensatory role of the visual and neurological systems. So, the role of these anomalies is still under evaluation.