Photonic Sensors (PS) are the set of devices/systems designed to carry out the faithful reproduction of the measurand in the electrical domain using photonic technologies in their key sensor parts.

In general, optical-fibre sensors are highly diverse. Since the optical properties of most materials are naturally responsive to their surroundings, there is a large number of sensing opportunities for optical-fibre sensors to measure several physical, chemical, and biological parameters [7]. Even though the modulation techniques of transducers are similar for most optical-fibre sensors (based on absorption, reflectance, fluorescence, and refractive index changes), the diversity of sensors keeps increasing. Physical alterations on the optical-fibre core, cladding, or end face, give rise to a large variety of sensing structures with different characteristics. Among the many that exist, it is worth highlighting optical structures based on gratings, either fibre Bragg gratings (and modified versions such as tilted or chirped) or long-period gratings; interferometry, standing out Mach–Zehnder (MZ), Michelson, Sagnac configurations, or Fabry–Pérot cavities, among others; or geometry-modified fibres, such as tapered and U-shaped fibres. Special coatings (or films) could also be applied to the fibres, for which metal coatings are the most used. These coatings provide, mainly, higher sensitivity to measurands by exploiting the surface plasmon resonance (SPR) effect. Recently, optical biosensors implementing biorecognition elements have enabled new functionalization and detection capabilities of the fibres. Furthermore, the potential of optical-fibre technology has been remarkably extended by combining optics and microfluidics (optofluidics [8,9]) using optical fibres, i.e., optical-fibre optofluidics [10,11]. Finally, another degree of flexibility (and diversity) on the design of optical-fibre sensors is imposed by the fibre type and its characteristics. For instance, single-mode, multimode, single-core, multicore, hollow-core, photonic-crystal fibres or polymer fibres. Overall, the potential of optical-fibre sensors is enormous, and a wide range of combinations may be employed.

Although there has been an increasing interest in biomedical optical-fibre sensors, there is still a low level of implementation [6,14]. From the technical point of view, to widen the acceptance and implementation of the technology, optical-fibre sensors may require [15]: meeting a need other sensors cannot, showing outstanding performance at a similar cost of existing solutions, or significantly reducing their cost.

This review is divided into three main sections. First, a conceptual section regarding biomedical photonic sensors is provided to establish the basic definition of what should be understood as a biomedical photonic sensor ( Section 2 ). Then, Section 3 describes the most recent biomedical photonic sensors based on optical fibres and acting as stand-alone devices. This section describes the latest advancements in sensing physical parameters (vital signs and temperature), biochemical parameters (pH, oxygen, cancer-related and others), including a brief description of multiparameter sensors for lab-on-fibre implementation. Finally, Section 4 presents fibre-optical probes integrated into medical instruments such as endoscopes, catheters, and needles. It includes fibre-optical probes for spectroscopy and modified probes to sense shape and force.

For information about fundamentals, operation principles of the sensors, and previous works not covered in this review, the reader is referred to the literature regarding optical-fibre sensors applied in the biomedical field [6,12,17,18,19,20,21,22]. For an extended list of reviews of optical-fibre sensors focused on biomedical applications (or with biomedical interest), the reader is referred to Table S1 in the supporting information .

The detection, capture, measurement, supervision, and control of magnitudes of given objects are requirements of paramount importance in today’s times. Obtaining specific information about a given parameter or measurand (M x ) in any state or domain on/in an object (O y ) placed in a given environment is commonly recognized as a detection process. Sensors are the devices or systems developed to detect and capture physical, chemical, biological, biomedical measurands, etc., translating and reproducing them in the electrical domain to be useful in real applications in today’s world. Photonic Sensors (PS) are the set of devices/systems designed to carry out the faithful reproduction of the measurand in the electrical domain using photonic technologies in their key sensor parts [23].

Illustration of the Biomedical Photonic Sensor concept and its conceptual block diagram. The photonic sensor provides representative and faithful electrical signals of physical, chemical, biological, or physiological measurands on/in a given object or target. When a BPS is equipped with some kind of intelligence and provides actuation signals, it is transformed into a Biomedical Smart Photonic Sensor (BSPS). It is integrated into three main parts: Optical Transducer; Optical Channel and Optoelectronic Unit [31,32,33]. Courtesy of the authors.

This work focuses on recent advances in biomedical photonic sensors in which optical fibres play a central role, i.e., biomedical optical-fibre sensors (BOFS). For instance, besides serving as light guiding media, the optical fibres act as transducers detecting signals from the measurand and enabling the characterization and calibration measurements of biomedical parameters.

Functionalization of the optical fibres has brought higher sensitivity for the measurements; however, there is still a need to maximize the signal-to-noise ratio in some instances. The density of fluorophores at the tip of an optical fibre plays an essential role in the sensor’s sensitivity and the dynamics of the signal detected. This has been shown by Ehrlich et al. [80]. The authors pursued sensing parameters for in vivo applications using the same fibre sensors as explained previously [79]. They noticed that a high density of fluorophores at the tip of the fibre provides higher sensitivity and stability for measuring pH. In addition, they introduced time-resolved measurements of the fluorophores emission to provide insight into the dynamic changes occurring when the density of fluorophores was modified.

This section includes results on multiparameter sensors and lab-on-fibre or lab-in-a-fibre devices. In the following, lab-on-fibre or lab-in-a-fibre will be referred to as LOF. A brief introduction to such concepts is given before describing the latest results on multiparameter sensors (simpler structures) and more advanced optical-fibre sensing structures towards LOF devices.

Alternatively, lab-in-a-fibre devices can also be fabricated by femtosecond laser irradiation followed by chemical etching (FLICE) [11]. FLICE, also referred to as ultrafast laser-assisted etching (ULAE) or femtosecond laser-assisted etching, has unique capabilities that allow straightforward fabrication of channels (with natural circular cross-sections, not easily achieved with other techniques) with 3D geometries for sensing [11]. Besides typical inscriptions using femtosecond laser processing (see [98]), the combination of fs-laser processing and chemical etching on silica (e.g., HF or KOH) has demonstrated the fabrication of microchannels, X-couplers, filaments, among others [11,99]. Inscribed microchannels could allow liquids to flow in and out of the fibre, expanding the ability to measure diverse parameters. For instance, microfluidics plus photonics (known as optofluidics [10]) could also be implemented in the fibre (making use of the cladding). Typically, FLICE is performed on silica fibres, whereas the inscription of microfluidic channels on polymer fibres has also been reported [100]. Although complex in its fabrication process, this new approach could expand the applications of optical fibres and photonic devices. In this context, the lab-on-fibre technology is no longer only restricted to transducing elements in, on, and around the fibre. Thus, the potential for biomedical applications, including multiple transducers in a single fibre, more functional surgical tools, medical probes or catheters, distributed sensing and microfluidics flow cytometry, can be envisaged. Another biomedical potential is the fabrication of shape sensing systems. For example, the measurement of torsion in a single fibre (typically requiring multiple fibres, see Section 4.2 ) was enabled by using FLICE to inscribe a twisted structure inside the fibre [101].

Regarding the applications of multiparameter sensors (simpler structures than LOF devices), just a few examples of multisensors have been reported for the biomedical field (some previously described in Section 3 ). On the other hand, there are other general studies on optical sensors for multiple parameters with strong potential for biomedical applications. In the following, we highlight some examples of optical-fibre multiparameter sensors targeting biomedical applications. Then, a couple of examples, including a lab-on-fibre strategy, will be described.

In this case, the latest developments in this field employ technologies other than femtosecond lasers. They are mostly related to coherent fibre bundles (CFB), also known as imaging fibres [120,132,133]. It is known that different human tissues contain chromophores, whose fluorescence intensity and spectrum shape are strongly dependent on the characteristics of the excitation light source [120]. Numerous clinical studies have also shown that fluorescence spectroscopy allows the determination of an abnormal state of human tissues in the brain, head, breast, skin, or gastrointestinal tract, among others [117,125].

Within the latter field, there are high-resolution imaging fibres. An imaging fibre comprises thousands of cores ( Figure 9 1b), each of which acts as a pixel, transmitting the corresponding part of the fluorescence image located at the distal end of the fibre [132,137]. A typical fluorescence image setup is depicted in Figure 9 1c. High-resolution imaging with these fibres is achieved by minimizing the distance between the cores (centre-to-centre pixel spacing ranges approximately from 3 to 10 µm). However, this distance is limited by a cross-coupling signal between the cores. There are different ways to reduce cross-coupling and thus avoid resolution degradation: high refractive-index contrast between cladding and cores, air-separated cores, or fibres with absorbant cladding material, among others. However, these are all options with high manufacturing costs, limiting their practical use. 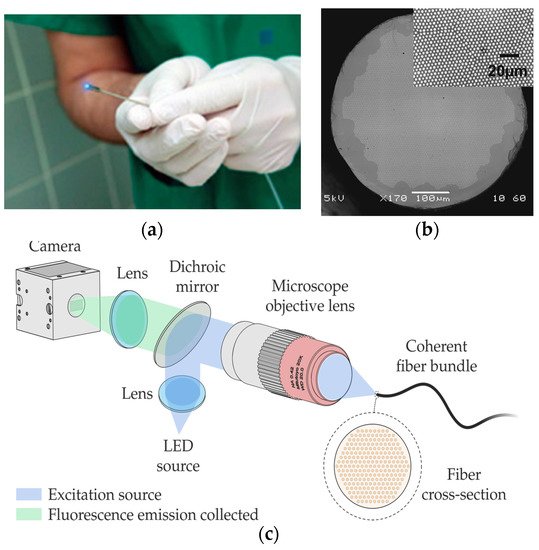 Figure 1. (a) Blue light-emitting optical-fibre probe for fluorescence microscopy in endoscopically accessible tissues (This image was taken from their original created by Osman et al. [133] under the terms of the Creative Commons Attribution 4.0 International License). (b) High-resolution hexagonal array imaging fibre comprises 12,247 cores. This image was taken from their original created by Stone et al. [137] under a Creative Commons Attribution 4.0 Unsorted license. (c) Example of an epifluorescence imaging system (image courtesy of the authors). An excitation source is coupled via a dichroic mirror into the coherent fibre bundle. The fluorescence emitted by the sample is collected at the end of the fibre and propagated to a camera.

Also based on FBGs, the sensor proposed in [155] is designed to detect the interaction forces between the catheter tip and the tissue. The authors propose a 3D printed sensor consisting of a hollow core cylinder, which detects lateral forces. In this case, four optical fibres are sued to decouple the force and temperature parameters. A minimum resolution of 0.52 mN for lateral force (between −0.8 to 0.8 N) and 0.63 mN for axial force (between 0 −0.8 N) is demonstrated. An error below 6.5% is obtained for temperatures ranging from 25–50 °C. A similar device (4 optical fibres) was demonstrated with a maximum shape error of 3.43% [156] and with 1.05 mm error [157].

Finally, a multiparameter measurement FBG-based needle is proposed in [179]. In this case, the FBG fibre is made sensitive to chemical parameters by a polymer functionalisation of the fibre optic. Specifically, the authors make the FBG sensitive to relative humidity, resulting in a Bragg wavelength shift of ~0.38 nm for relative humidity changes from ~20% to ~90%. In addition, the FBG-based needle sensor can measure the breathing rate during mechanical ventilation, allowing the relative humidity change during this process to be followed.