The use of natural products to promote health is as old as human civilization. In recent years, the perception of natural products derived from plants as abundant sources of biologically active compounds has driven their exploitation towards the search for new chemical products that can lead to further pharmaceutical formulations. Candida fungi, being opportunistic pathogens, increase their virulence by acquiring resistance to conventional antimicrobials, triggering diseases, especially in immunosuppressed hosts. They are also pointed to as the main pathogens responsible for most fungal infections of the oral cavity. This increased resistance to conventional synthetic antimicrobials has driven the search for new molecules present in plant extracts, which have been widely explored as alternative agents in the prevention and treatment of infections.

Medicinal plants have been used for several centuries to treat a wide variety of ailments. In recent years, the investigation into molecules derived from these plants, which play a fundamental role in the resistance of various pathogens, has boosted the study of their antibacterial and/or antibiofilm properties [1][2][3][1,2,3]. Some plant compounds can interact with bacterial proteins and cell membrane structures, damaging them and reducing their fluidity, while inhibiting their nucleic acid synthesis and interfering with the energy metabolism of the microorganisms themselves [2][4][5][2,4,5]. Additionally, the study of the antibiofilm properties associated with these molecules has revealed that, in addition to their fungicidal/bactericidal effect, other underlying mechanisms can lead to biofilm suppression, namely, disturbances at the level of bacterial regulation mechanisms [6].
The biofilm is a more resistant form of microbial existence on solid surfaces and air–liquid interfaces in which microorganisms multiply in a matrix of self-produced extracellular polymeric substances (EPS) [7]. Its resistance is directly related to the natural survival characteristics of the microbial cells that live in these communities. The slower growth of cells associated with the biofilm, as opposed to free-living microbial cells, and the tight regulation of the cellular processes, stand out, and are mainly caused by the more restricted contact of the cells inside the biofilm with external nutrients. In addition, the presence of an EPS matrix that hinders the action of antimicrobials contributes even more to the resistance of biofilms, since this matrix acts as a diffusion barrier against small molecules [8][9][8,9].
Biofilms can be found in a variety of surfaces, both biotic and abiotic. Particularly in the oral cavity, biofilm can be found in the teeth and mucosal surfaces and are thought to consist of approximately 700 bacterial species, 100 fungal species, and some viruses [10]. Since these microorganisms coexist in the same environment, there is the possibility of interactions between different species, a factor that can make an oral infection more difficult to treat, creating an environment of protection and tolerance for microorganisms against conventional antimicrobial agents [11].
One of the main groups of microorganisms that can be found in the normal oral flora is the genus Candida, which is composed of dimorphic commensal yeast. Although Candida species are mainly nonpathogenic, when an imbalance in the oral microbiome occurs, they are the main pathogens responsible for the occurrence of fungal infections in the oral cavity [12]. One of the key virulence factors associated with these microorganisms is their ability to adhere to oral surfaces and form biofilms, which function as a reservoir for this type of fungi, both in teeth and mucosal surfaces [13][14][13,14]. Several factors contribute to the unbalanced colonization and biofilm formation in the oral cavity by Candida spp., namely, low salivary flow, low pH and poor oral hygiene among others [15]. As an opportunistic pathogen, this yeast can also cause disease when the host’s immune system is debilitated by the appearance of pathologies such as diabetes mellitus and Human Immunodeficiency Virus (HIV) infection, and by the use of broad-spectrum antibiotics, among others [16]. Additionally, as they are one of the largest acid producers in the oral cavity, Candida fungi can also be at the origin of dental caries through a localized infectious process [17][18][19][17,18,19].
Once the establishment of pathogenic oral biofilms occurs, the risk of the occurrence of systemic infections increases, as does the resistance of these infections to conventional antimicrobial therapies [20]. Currently, the treatment of Candida infections in the oral cavity is mostly done using broad-spectrum antimicrobials, however, conventional biocidal agents can cause substantial side effects if administered in high concentrations, including vomiting, diarrhea, mucosal desquamation, tooth discoloration, etc. [11][19][11,19]. Given the harmful effects of traditional antimicrobial agents, and the increasing microbial resistance to them, natural plant products have been pointed out as a safe and efficient alternative for the treatment of Candida infections in the oral cavity since, together with their anti-inflammatory, antioxidant, and analgesic properties, they also exert antimicrobial and antibiofilm effects over Candida spp [21].

2. The Bioactive Compounds of Plants

Folk knowledge about the medicinal use of plants has been transmitted for centuries [22]. In recent years, much of the ethnopharmaceutical research has been focused on more specific approaches in order to evaluate and understand the biological and pharmaceutical effects of medicinal and aromatic plants [22]. Plants are rich in a wide variety of secondary metabolites which play an important role in the defense against numerous pathogens. These molecules are also involved in adaptation to biotic and abiotic stresses, protection against ultraviolet radiation, oxidation of molecules, nutritional and water stresses, while performing functions at the tissue level structure, being able to add flavor and color to plant products [23].
Presently, about 200,000 different plant secondary metabolites have been isolated and identified [24]. They can be classified based on their chemical structures and/or biosynthetic pathways [25]. A simple classification includes three main groups: terpenoids (polymeric isoprene derivatives and biosynthesized from acetate via the mevalonic acid pathway), phenolics (biosynthesized from shikimate pathways, containing one or more hydroxylated aromatic ring), and alkaloids (nonprotein nitrogen-containing compounds, biosynthesized from amino acids, such as tyrosine) [26]. Terpenoids, the condensation products of C5 isoprene units, are the main components of plant volatiles and essential oils [27]. They present many important properties, including anti-insect, antimicrobial, antiviral, and antiherbivore properties [28]. Phenolic compounds are widely found in fruits, seeds, leaves, roots, and stems, and are known for their strong antioxidant ability and their anticancer, anti-inflammatory, hypolipidemic, and hypoglycemic properties [29][30][29,30]. They have at least one aromatic ring with one or more hydroxyl groups attached, ranging from low molecular weight molecules to large and complex ones [31]. Alkaloids are usually cyclic organic compounds that contain at least one nitrogen atom in an amine-type structure [32]. These compounds are known to possess varied biological activities such as antimicrobial and antimalarial properties, among others [33].
Many studies have been published regarding bioactive properties such as antioxidant [34][35][34,35], antitumoral [31][36][31,36], analgesic/anti-inflammatory [29][37][29,37], immunostimulant [38], antiseptic, and antimicrobial [39][40][41][39,40,41]. The antimicrobial and/or antibiofilm activity linked with some of these compounds is closely related to their ability to inhibit the synthesis of nucleic acids, disrupt the plasma membrane, inhibit efflux pumps, elicit mitochondrial disfunction, impair cell division and/or growth, and impair cell-wall formation, as shown in Figure 1 [42][43][42,43]. 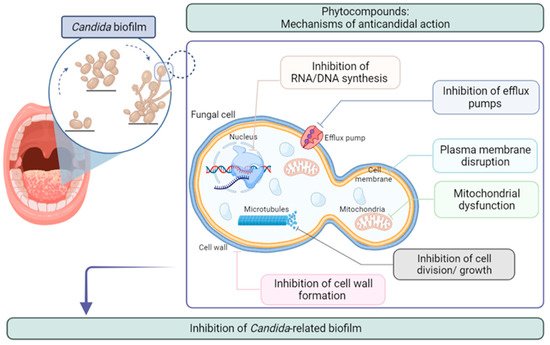 Figure 1. Mechanisms of action of phytocompounds against Candida spp. (Created with BioRender.com).
Given their strong bioactive potential, various types of phytocompounds are currently used in a wide range of fields such as food, pharmaceuticals, biomaterials, and environmental purification [44]. Regarding the ability of these compounds as antimicrobials, multiple studies have been conducted to determine their capability to fight oral infections caused by opportunistic pathogens such as Candida species [45][46][47][48][45,46,47,48]. The increased virulence of some Candida species such as Candida albicans is largely related to their ability to form biofilms which, as mentioned before, makes oral infections caused by these microorganisms very difficult to treat [49]. Taking this information into account, the use of plant-derived products to fight oral pathologies caused by Candida appears as an alternative to conventional antifungal therapy. In oral care, the use of natural products to prevent candidiasis is receiving much attention and many studies have reported the effects of medicinal plant extracts on the inhibition of oral pathogen growth and inhibition of surfaces adhesion to surfaces [50]. Some of the most prescribed antimycotic agents that are currently used target the synthesis of fungal cell membrane components that are not found in human cells, such as ergosterol [51]. However, there are few available antifungal compounds that show low levels of cytotoxicity, given the similarities between human and fungal cells, making it urgent to search for and identify new molecules capable of disrupting biofilms formed by Candida spp. and increase the arsenal of antifungal agents [52][53][52,53]. Knowing this, screening plants as potential sources of molecules with antifungal and/or antibiofilm properties can be considered an excellent approach to combat the formation of Candida spp. oral biofilms and the establishment of infections [54].