Astaxanthin (AST) is a biomolecule known for its powerful antioxidant effect, which is considered of great importance in biochemical research and has great potential for application in cosmetics, as well as food products that are beneficial to human health and medicines. Unfortunately, its poor solubility in water, chemical instability, and low oral bioavailability make its applications in the cosmetic and pharmaceutical field a major challenge for the development of new products. To favor the search for alternatives to enhance and make possible the use of AST in formulations, this article aimed to review the scientific data on its application in delivery systems.

Astaxanthin (AST) is a xanthophyll carotenoid that was first isolated from lobster by Kuhn and Sorensen and was commercialized as a pigmentation agent for feed in the aquatic farm industry [1,2][1][2]. The AST, or 3,3′-dihydroxy-β,β-carotene-4,4′-dione, is a tetraterpene composed of 40 carbon atoms (Figure 1 A), and its molecular formula is C40H52O4 (molecular mass 596.85 g·mol−1) [3,4][3][4]. This reddish-orange pigment is solid at room temperature, is fat-soluble, and its log P (octanol/water partition) is 13.27 [4]. Furthermore, its chemical structure is composed of 13 conjugated double bonds that have the ability to neutralize free radicals, conferring the strong antioxidant activity of AST [3]. 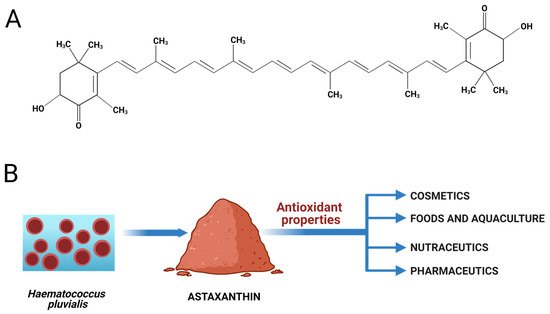 In recent years, AST has gained visibility and attracted attention for cosmetic and dermatological applications, thanks to its remarkable antioxidant properties, which are much stronger than those of tocopherol, and to its positive effects on skin health and protection against UV radiation, which may suggest promising applications in anti-aging products [5,6][5][6].

Regarding industrial applications, AST has been produced synthetically through cost-effective methods for large-scale production. However, the green microalgae Haematococcus pluvialis, due to its ability to accumulate AST at high levels, is the main source for human consumption, besides being the most promising source for its industrial biological production [1,7][1][7]. It can be found either in plants, animals, yeasts, or other algae species. Nowadays, it finds many applications in aquaculture, cosmetics, foods, nutraceuticals, and pharmaceuticals [1] (Figure 1 B).

Microemulsions are thermodynamically stable transparent delivery systems formed by droplets dispersed on a liquid phase, which are capable of forming spontaneously and have low interfacial energy and size, ranging from about 10 nm to 100 nm (Figure 32 A) [33,34][20][21]. Zhou et al. [35][22] developed AST oil/water microemulsions and checked the effect of different antioxidants either alone or in combination as additives to improve their stability. The microemulsion prepared with AST alone, with Tween 80 as an emulsifier and ethanol in buffer solution, retarded AST degradation, thereby proving to be an excellent alternative to improve emulsions for AST delivery. 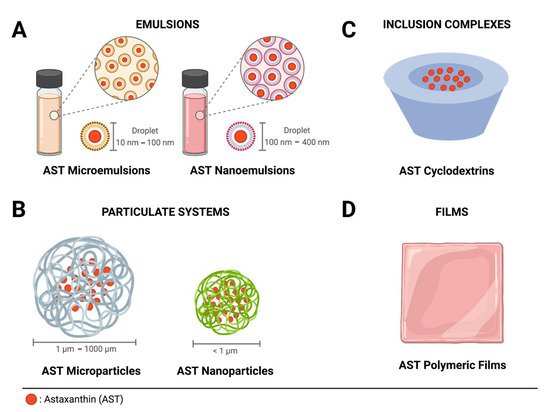 To obtain stabilized cosmetic products with anti-wrinkle, anti-aging, and humectant properties, Kim et al. [37][23] prepared oil/water AST nanoemulsions using glycerol esters such as glyceryl citrate, lactate, linoleate and oleate as alternative emulsifiers to the traditional hydrogenated lecithin. Nanoemulsions were studied in terms of their physicochemical properties, such as the emulsifier type and concentration, preparation conditions, and AST concentration, and were characterized by a freeze-fracture scanning electron microscope (FF-SEM), TEM, and high-performance liquid chromatography (HPLC). Nanoemulsions, with zeta potential in the range from −10 to −57 mV and an average particle size of 170 nm, were progressively more unstable with the increase in particle size when hydrogenated lecithin was used.

Hong et al. [38][24] prepared AST nanoemulsions that were functionalized with carboxymethyl chitosan, to investigate its effects on the droplet size, stability, skin permeability and cytotoxicity of the formulation. For this purpose, the low-energy emulsion phase inversion method was used, which, in addition to preventing AST degradation during nanoemulsion preparation, has the advantages of a low cost, high energy efficiency, simplicity of production and easy scale-up. Results showed improvement in chemical stability and skin permeability, while the small droplet size, satisfactory physical stability, and low cytotoxicity were not affected by the functionalized nanoemulsion.

To prevent antioxidative stress on endothelial cells, Zuluaga et al. [67][25] developed a similar complex with AST and hydroxypropyl-β-cyclodextrin (HP-β-CD). The differential of this study was the direct and indirect measurement of its antioxidant capacity by understanding the cells’ molecular mechanisms involved in gene expression. Results showed that the inclusion complex formulation could protect cells by activating endogenous AST systems through the Nrf2/HO-1/NQO1 pathway, in addition to the enhancement of solubility due to its incorporation into the cyclodextrin core.

Liposomes in themselves are relatively unstable delivery systems because of their membrane instability in aqueous solution, which can affect their bioavailability and pharmacological effect, the addition of adjuvants being necessary to bring more rigidity and stability. AST seems to enhance the liposomes’ stability when on the membrane, which helps its delivery. The strategy of adding other adjuvants to improve membrane rigidity seems to be necessary to ensure stability, which should be taken into account when assessing production costs. Reducing the particle size with the development of nanoliposomes seems to be an excellent alternative method to improve their stability and consequently their penetration, solubility, and continuous release; however, it is still necessary to consider the machinery and costs involved. Another innovative alternative method to deliver AST on deep skin layers is the use of the iontophoretic technique with charged delivery systems, developed with liposomes, which makes it possible to reach the stratum corneum and act as a whitening agent.

Particulate systems are a promising alternative way to develop innovative formulations for AST delivery, thanks to the possibility of using different matrix components and methods to form spheres and capsules at micro- or nanoscale. Similar to nanoemulsions, studies based on experimental design can be performed to optimize the conditions needed to prepare particulate systems. It is important to consider alternative methods, to prevent AST degradation. Some articles on particulate systems considered in this review presented either ecological or natural alternatives to develop delivery systems, which can aggregate to more sustainable products.

The use of CDs as systems to guest AST in inclusion complexes is able to significantly improve the solubility of hydrophobic compounds like AST. However, it would be necessary to have a greater number of inclusion complexes, in order to carry out a comparison by which to identify the most advantageous system. From the results examined in this review, it is possible to state that AST can form inclusion complexes either with natural CDs, such as β-CDs, or with modified CDs, such as HP-β-CD. Films for the delivery of bioactive compounds on the skin are an alternative, especially for wound healing and scald treatments. The antioxidant effect accelerates the healing process, due to its anti-inflammatory activity. The AST-incorporating films may also be applied as an easy adjunct treatment, to treat skin cancer, which should be considered in the research. In addition, AST seems to act merely as an active principle, which requires a film-forming agent such as collagen, chitosan, cellulose derivatives, and others to create the film structure.

The systems that seem to be more developed and robust are the emulsions and the particulate systems, given the large number of articles and assays performed on them. However, they are not the only systems to consider. On the other hand, the limited studies carried out on other systems, many of which are not mentioned in this review article, show opportunities for the development of new and innovative formulations. Examples are solid dispersions, transdermal systems, and others.

Delivery systems are useful for the improvement of the physicochemical profile of this compound, such as stability, water-solubility, antioxidant properties, drug release, and in vivo and in vitro biological activities. Therefore, the delivery systems for loading AST described in this article create opportunities for industrial applications; however, other industrial issues for the development of new products must be evaluated. Moreover, AST-optimized products become potentially attractive for the development of further studies, due to the antioxidant properties and benefits of AST.