The unique biology of the intestinal epithelial barrier is linked to a low baseline oxygen pressure (pO2), characterised by a high rate of metabolites circulating through the intestinal blood and the presence of a steep oxygen gradient across the epithelial surface. These characteristics require tight regulation of oxygen homeostasis, achieved in part by hypoxia-inducible factor (HIF)-dependent signalling. Furthermore, intestinal epithelial cells (IEC) possess metabolic identities that are reflected in changes in mitochondrial function. In recent years, it has become widely accepted that oxygen metabolism is key to homeostasis at the mucosae. In addition, the gut has a vast and diverse microbial population, the microbiota. Microbiome–gut communication represents a dynamic exchange of mediators produced by bacterial and intestinal metabolism. The microbiome contributes to the maintenance of the hypoxic environment, which is critical for nutrient absorption, intestinal barrier function, and innate and/or adaptive immune responses in the gastrointestinal tract.

The primary roles of the intestinal epithelial barrier are absorption of nutrients, fluid homeostasis, removal of waste products, and maintenance of tolerance to antigens [1]. Intestinal epithelial cells (IEC) are located at the interface of the nutrient and microbial ecosystem. The monolayer of IECs is a key player in maintaining metabolic and immune homeostasis [2]. The epithelial layer can be completely renewed in 3–5 days and serves as a protective mechanism against injury and infection [3]. Renewal of the epithelial layer of the IEC requires a specific population of IEC called intestinal stem cells (ISCs) [4].
The epithelium, covered with mucous, is supplied by an abundant vascular system. Even a minor disturbance in blood flow can cause a substantial decrease in O2 supply (hypoxia) to the epithelia. The small and large intestine can quickly adapt to the widely fluctuating O2 levels in blood perfusion [5].
At the baseline of epithelial cells lining the mucosa, relatively low pO2 exists, which is referred as “physiological hypoxia” [6]. Cells can adapt to oxygen supply and demand under hypoxia, demonstrating that cells must have oxygen sensing mechanisms regardless of their temporary biological status. Mitochondrial signals represented by reactive oxygen species (ROS) and metabolites can mimic acute and chronic hypoxia responses [7]. Rapid acute responses occur as a result of ROS-induced or metabolite-induced Ca2+ accumulation in specialized oxygen-sensitive cells. Long-term hypoxia sensing is possible through ROS and metabolites due to hypoxia-inducing factor (HIF) activation [7].
The epithelial cells are overlaid by a mucus surface, which is an important barrier to the flow of antigens from the lumen. The mucosal surface harbours trillions of microbes, including bacteria, fungi, and viruses. Collectively, they produce an array of fuel sources and signalling molecules such as short-chain fatty acids (SCFAs), including butyrate, propionate, and acetate. Microbially derived SCFAs, particularly butyrate, stimulate epithelial metabolism, alter gene expression [8], and increase epithelial O2 consumption to a level that cells perceive as metabolic hypoxia, which leads to the stabilization of the transcription factor HIF [9].
In turn, intestinal oxygenation directly shapes the composition of gut microbial communities and oxidative changes in intestinal inflammation and may underlie the characteristic dysbiosis related to the microbiota in patients with IBD [10]. Here, we will discuss how the intestinal epithelium functionally adapts to a low O2 pressure (pO2) environment, how crosstalk between the microbiota and hypoxia functions, and how oxygen metabolism at the epithelial barrier is affected in health and disease.

At the intestinal barrier, the unique oxygen profile is governed by two main factors—by oxygen metabolism of epithelial and sub-epithelial cells during food digestion and nutrient absorption, and by intestinal microbiota within the lumen. For example, the energy expended during digestion and absorption can account to up to 10% of total energy expenditure, measured as dietary induced thermogenesis [11]. During the metabolic processes of digestion and absorption, gastrointestinal oxygen consumption is increased disproportionately compared to the gastrointestinal blood flow, resulting in hypoxia [12]. Adding to the complexity, the gut microbiome is composed mainly of anaerobic bacteria which must, however, be able to quench the reactive oxygen species produced during aerobic host metabolism [13]. At the same time, the gut microbiome is critically involved in the maintenance of hypoxic conditions within the lumen, which is required for normal intestinal functions including nutrient absorption [14].
The characteristic features of the digestive tract are the longitudinal and the radial steep spatial oxygen gradient (Figure 1). Longitudinally—from the small intestine to the colon—the oxygen level drops (Figure 2) [15][16][15,16], and a negative gradient is also observed from lamina propria towards the lumen. To illustrate this, in mice, pO2 drops from 58 mmHg in the stomach to 32 mmHg in the duodenum, through 11 mmHg in the ascending column and to 3 mmHg in the sigmoid column (all values measured using electron paramagnetic resonance, EPR) [16]. In contrast, the pO2 at the sea level is 140–150 mmHg (corresponding to ~21% O2), and at the lung alveoli, it is still high at ~105 mmHg [17]. Considering the short distance, the radial gradient is even steeper—using the phosphorescence quenching method, it was shown that in mice, the pO2 drops from 40 mmHg in the subepithelial tissue to below 1 mmHg in the lumen over a distance similar to the thickness of the intestinal wall (~300 µm) [10]. While the values obtained using different methods are not directly comparable, they nevertheless depict the striking differences in oxygen levels at various points of the gastrointestinal tract. 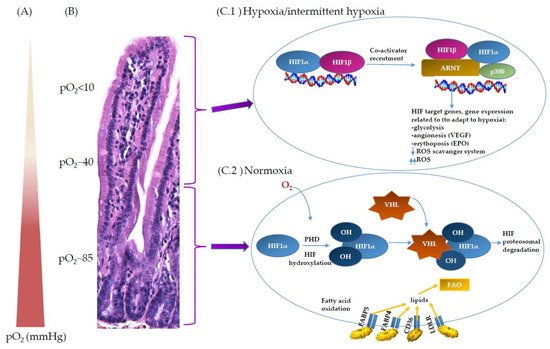 Figure 1. O2 and its regulation at the intestinal epithelial barrier site. (A) Counter current blood flow reduces local pO2 along the crypt–villus axis and results in low pO2 at the villus tip. (B) Histological section of small intestine; villus–crypt axis, BALB/cOlaHsd mouse. (C) Hypoxic/normoxic environment along crypt–villus axis. (C.1) Hypoxic condition or intermittent hypoxia at the upper part of the villa; inactive HIF hydroxylases. HIF-1 is composed of two subunits—oxygen-sensitive HIF-1α and HIF-1β. Due to low O2, PHD activity is decreased. HIF-1α is stabilised and binds to ARNT in the presence of co-activator p300; altogether, it activates transcription factor of HIF target genes. (C.2) Normoxic conditions at the bottom of the crypt. In the presence of O2, PHD enzyme hydroxylates the two proline residues on HIF, enabling the binding of VHL to the HIF subunit, which degrades HIF-1α subunits under normoxic conditions. Fatty acid oxidation (FAO) is predominately present in normoxic cells. 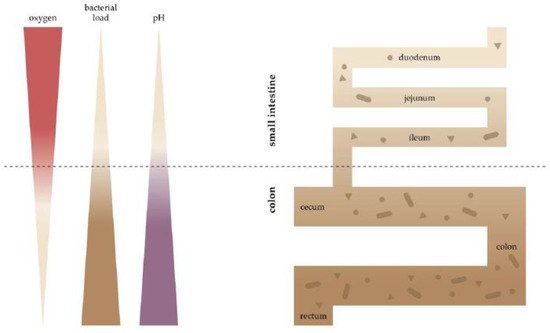 3. Oxygen Sensing at the Epithelial Barrier in IBD

Oxygen homeostasis in healthy intestines is assured by dynamic and rapid fluctuation in cellular oxygen tension. In inflammatory bowel disease (IBD), this cellular oxygen tension is dysregulated [18][40]. IBDs are chronic, immunologically mediated diseases of the gastrointestinal tract. The current understanding of IBD pathogenesis assumes that in genetically predisposed individuals, an improperly regulated interaction between the microbiota and the mucosal immune system leads to an inappropriate inflammatory response and that disease recurrence is triggered by environmental factors that remain to be fully characterized (Figure 3) [19][85]. The sensors that detect fluctuating oxygen levels appear in normal and disease states. They are an important link between metabolism and chromatin regulation; therefore, it is warranted to further address how oxygen-regulated metabolic adaptations affect the epigenome and how this impacts the function of cells [20][86]. 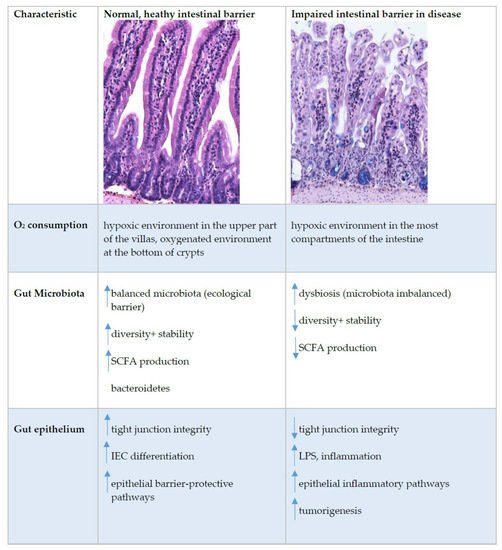 Figure 3. Intestinal epithelial barrier in health and disease. This figure shows immunohistochemistry picture of small intestine crypts–villus axis in healthy and impaired intestine in BALB/cOlaHsd mice and highlight the main characteristics where the differences at the healthy or impaired (in disease) intestinal barrier were detected. Up and down arrows indicate an increase and decrease, respectively. Abbreviations: IEC, intestinal epithelial cells; LPS, lipopolysaccharide; SCFA, short-chain fatty acids; TJ, tight junctions.
It is noteworthy that inflammation is associated with hypoxia [21][87]. Infiltrating immune cells, invading pathogens, bacteria, and the increased energy demands of resident cells can force a sharp drop in available oxygen [5]. In colitis, hypoxia is observed in all parts of the mucosa [18][40]. These oxygen-limiting conditions impair β-oxidation, and can lead to remodelling of membrane lipids and proteins, with an increase in saturated fatty acids [22][29]. In addition, with pO2 reduction due to inflammation, IECs can release pro-inflammatory cytokines such as TNF. Furthermore, a drop in pO2 contributes to increased epithelial cell apoptosis [23][88].
The exact mechanism for the increase in hypoxia in IBD is not yet clear [18][40]; it probably occurs due to several factors. Inflammation may lead to an increase in oxygen consumption by epithelial cells or an increase in vasculitis (inflammation of blood vessel walls) and thus, a decrease in oxygen availability in the inflamed areas. It is also possible that during inflammation, migrating neutrophils consume local oxygen and thus, increase hypoxia in colitis [5][24][5,89].
In the inflamed mucosa, HIF-1α increases barrier protection genes, enhances innate immune responses, and activates an antimicrobial response by increasing β-defensins, antimicrobial peptides implicated in the resistance of the surface of epithelia to microbial colonization. β-defensin expression requires low-oxygen conditions and HIF-1α activation [25][90]. All of these activities of HIF-1α in colitis result in a protective response. On the contrary to HIF-1α, HIF-2α are essential for the maintenance of an epithelial inflammatory response and, when chronically activated, can also increase the pro-inflammatory response, intestinal injury, and cancer [18][40]. However, more work is needed to fully understand the dynamic regulation of HIF-1α and HIF-2α in inflamed mucosa.
IBD is classified into two broad groups: ulcerative colitis (UC) and Crohn’s disease (CD). In UC patients, inflammation is localised in the colonic region. In CD patients, inflammatory lesions are seen throughout the gastrointestinal tract, with some extra ulcerated mucosa and granulomas [26][91]. Both HIF-1α and HIF-2α expression are increased in the intestinal epithelium of UC and CD patients and in a mouse model of colitis [21][87].
The composition of the microbiota is frequently associated with IBD [27][92]. In IBD, there is an overall decrease in microbial diversity, including decreased abundance and even loss of major phyla of obligated anaerobe bacteria such as Firmicutes and Bacteroidetes, which, in healthy individuals, represent 90% of all microbes present [28][29][30][31][56,84,93,94]. This suggests the presence of elevated oxygen levels. Following this, the abundance of facultative anaerobic bacteria, such as Enterobacteriaceae, is markedly elevated in individuals with IBD. The abundance of facultative anaerobic bacteria in the colon is correlated with the distribution of oxygen emanating from the host tissue [28][29][32][56,84,95]. Whether oxygen pressure alterations are causative or a result of the dysbiosis found in IBD remains to be determined.
A homeostatic role for SCFA in the distal gut during inflammation is important in the progression of inflammatory diseases. It was reported that a reduction in SCFA is associated with IBD [33][27][63,92]. In addition, the epithelial transporter—the cell-specific butyrate transporter (encoded by SLC16A1)—is downregulated in the inflamed colonic mucosa of patients with IBD. The reduction in butyrate and subsequent inhibition of β-oxidation may be particularly detrimental in the context of intestinal inflammation [34][35][96,97]. Administration of exogenous butyrate promotes resistance to experimental colitis [36][98]. Butyrate can also protect mice from Clostridium difficile-induced colitis through a HIF-1-dependent mechanism [37]. SCFAs are currently the most studied bacterial metabolites that, from studies, can be identified as beneficial to colon homeostasis. IBD is correlated with disruption of commensal bacteria and the levels of expression of genes in commensal bacteria [38][99]. Although patients with IBD exhibit decreased overall diversity of the microbiome with alternation in microbiota, it is still not clear if these changes initiate disease pathogenesis or are secondary to inflammation [39][100]. The microbiota of patients with active CD is 50% less diverse and the microbiota of patients with UC is 30% less diverse [40][101]
Increased hypoxia, a lack of metabolites from the microbiota and a dysfunctional microbiota are the main characteristics of IBD. These characteristics of IBD underpin the disease course and contribute to extra-intestinal symptoms. Although of diagnostic value, which of the alterations are causative and which offer viable entry points for therapy beyond reducing symptoms remain to be investigated.
© Text is available under the terms and conditions of the Creative Commons Attribution (CC BY) license (http://creativecommons.org/licenses/by/4.0/)
Help
Top