Applications of Magnesium and Alloys 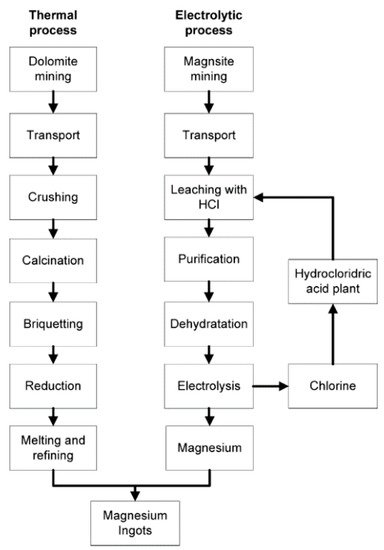 Figure 1. Process flowchart of primary magnesium production via a thermal and electrolytic process. Reproduced with permission from Cherubini, F., et al., LCA of magnesium production; published by Elsevier, 2008 [15].
Electrolysis is a two-step approach. First, it involves the hydrometallurgical preparation of the feedstock (dehydrated magnesium chloride), followed by feeding it directly through electrolytic cells [5]. Michael Faraday first discovered the core principles of producing magnesium metal with this method in 1833 [6]. In 1852, Robert Bunsen improved on Faraday’s process to achieve permanent separation of chlorine and magnesium, and that tweak in the process kickstarted the commercialization of magnesium [8]. Preventing the recombination of chlorine and magnesium was critical to Robert Bunsen’s success as anhydrous magnesium chloride is hygroscopic, which can lead to the formation of undesirable oxides and oxychlorides during direct dehydration [14]. Presently, it is still a technological challenge to produce anhydrous magnesium chloride with minimal or, ideally, no oxychlorides [16]. Bunsen’s electrolytic process is illustrated in Figure 1. The second method of producing magnesium metal is with heat. Unlike electrolysis, intense heat in the thermal reduction process eliminates the need for an elaborate feedstock preparation [8]. The Pidgeon and Magnetherm processes are the main thermal routes. They are also batched processes [14] that use the same basic chemistry [5]. In the Pidgeon process, dolomite and ferrosilicon are formed into briquettes with an externally heated retort to attain magnesium vapors. However, the Magnetherm process calcines a mixture of dolomite, ferrosilicon, and alumina to achieve the same by-product. The magnesium vapors obtained from both routes are then cooled and condensed separately before being extracted [5]. A typical thermal route is also illustrated in Figure 1. When the thermal reduction process was first introduced in the 1920s [16], it was touted to be the eventual replacement of electrolysis production. Today, the thermal routes, especially the Pidgeon process, are the most widely used due to their ability to produce high purity magnesium and the plethora of its raw material, dolomite [17].

Magnesium’s availability and unique blend of properties has made it very attractive for engineering and biomedical applications. Furthermore, alloying magnesium can modify or enhance its existing properties to make it suitable for even more applications. As an engineering material, magnesium’s notable characteristics include its lightweight, specific high strength to weight ratio, and superior machinability and castability. These factors enabled magnesium to find its footing in aerospace and automotive applications, where the industry is actively seeking lighter-weight alternatives to harness additional environmental and economic benefits. As a biomaterial, magnesium’s notable characteristics include its biocompatibility, biodegradability, and bioabsorbability on top of the engineering properties. In addition, it also includes its elastic modulus and innate anti-microbial mechanisms. Hence, magnesium is mainly used in musculoskeletal and orthopedic applications while extensively being investigated for cardiovascular medicine. While its ability to biodegrade is celebrated, the rate at which it biodegrades is problematic. It biodegrades rapidly, and as a result, this impeded magnesium’s widespread adoption in both engineering and biomedical applications. Nonetheless, with the ongoing research progress and technological advancements, the mitigation strategies to overcome magnesium’s overly rapid degradation are widely investigated. Magnesium is a promising material, and market research has demonstrated its projected increased demand. However, today’s primary magnesium is energy-intensive and inefficient to produce, which inspired research in additive manufacturing of magnesium alloys and using solar energy to perform the carbothermic reduction. Recycling magnesium is also an option to keep the supply circular, and there are ongoing investigations to determine the most commercially viable and environmentally sound recycling process.