The ICON (ICOsahedral Nonhydrostatic) SCM (single-column mode) is a single-column configuration of the ICON modeling
framework. The primary purpose of the ICON SCM is to use it as a tool for research, model evaluation and development. Thanks to the simplified geometry of the ICON SCM, various aspects of the ICON model, in particular the model physics, can be studied in a well-controlled environment. Additionally, the ICON SCM has a reduced computational cost and a low data storage demand. The ICON SCM can be utilized for idealized cases—several well-established cases are already included—or for semi-realistic cases based on analyses or model forecasts.

Numerical weather prediction (NWP) and climate modeling are two of the most important applications in atmospheric research and operational forecasting services. An essential part of numerical models is the physical parameterizations that model the unresolved part of the atmospheric processes. The physical parameterizations are designed according to the physical understanding of the atmospheric processes, but use simplified assumptions, which make the execution of the models tractable [1,2][1][2].
The increase in processing power of computers allows refinement to the horizontal and vertical grid spacing of numerical models, with the result, that some of the atmospheric processes become resolved at certain grid spacings and thus make their parameterization obsolete. At the same time, formulations used in the physical parameterizations can be made more accurate, or additional processes can be considered, which usually increases the complexity of the model (see e.g., [3,4][3][4]). Through this evolution, the models become more skillful.
However, model behavior can be difficult to understand and progress in model performance can be difficult to identify, due to the variety of interactions within and between parameterization schemes, but also due to the interaction of physics with the dynamics of the model. The cause and the effects in the modelled processes are hard to interpret correctly [5]. This often leads to the more pragmatic approach in the development of the numerical models, where the overall verification scores of the model forecasts are the only measure of the quality of the model. While such optimization may be attractive at first, it can lead to dead ends, where the errors of the individual parameterizations compensate each other and further development becomes very difficult (see e.g., [6]). It is more prudent, to develop the individual components of the models according to the physical understanding of the processes.
This is, however, generally not feasible in fully coupled three-dimensional models, mainly because of the computational cost, the difficulty to debug the code on multi-processor platforms, and the above mentioned interactions between the components. Therefore, a simplified version of the numerical model, a single-column mode or model (SCM), can be used for this task instead [5,7][5][7].
In an SCM, only one single vertical column is considered. This column can be interpreted as a single column in a 3D model that is isolated from the rest of the model. This allows use of the SCM for investigation of atmospheric processes decoupled from the large-scale dynamics [5]. Similarly to a three-dimensional model, an SCM has to be initialized with vertical profiles, typically provided by observations or model data. The influence of the surrounding environment and of selected physical processes can be prescribed, providing a controlled testing environment for individual physical parameterizations or their components. However, one should mention that SCMs show high sensitivity to the initialization and the prescribed forcing (see e.g., [8]). Since direct measurements of the required tendencies do not generally exist, the choice of surface boundary conditions and forcing is not trivial [9].
The one-column geometry is sufficient to investigate most parameterization schemes, because most of the physical processes are parameterized only in the vertical column of each individual grid cell, without communication with neighboring grid cells [2]. As a result, an SCM can, by definition, not be used for the study of parameterizations which consider resolved horizontal aspects and interactions of the physics with the dynamics of the model.
The computational cost of an SCM is minimal compared to the full model, and it can be run on a single processor. Thus, the sensitivity of an SCM to internal parameters, vertical grid spacing, forcing or boundary conditions (see, e.g., [10,11,12][10][11][12]) can be studied extensively. The minimal computational cost is accompanied by a low demand on storage space for data input and output. This enables one to increase the number of output variables, the output vertical resolution and the output frequency. The extension of output possibilities can be used for debugging and detailed auxiliary analyses of the model, such as the detailed structure and time evolution of underlying model variables, and the numerical properties of a parameterization.
In addition to model development, SCMs are a key resource to connect column-based field measurements with three-dimensional models, facilitating the evaluation of parameterizations based on observations. This explains why SCMs have attracted an increasing interest in the research community in general. Often, SCMs are used in combination with large eddy simulation (LES) to gain a comprehensive appreciation of the sub-grid physical processes [13]. In recent years, many SCM studies, inter-comparison projects and quasi-operational SCM simulations have been performed, contributing to a better understanding of atmospheric physics and thus, leading to substantial improvements in parameterization schemes [14,15,16,17,18,19,20,21][14][15][16][17][18][19][20][21].
Several atmospheric modeling groups derived one-dimensional versions of their model framework [8,22,23,24][8][22][23][24]. In this paper, we present a single-column configuration of ICON (ICOsahedral Nonhydrostatic), the modeling framework of the Deutscher Wetterdienst (DWD), and the Max-Planck-Institute for Meteorology (MPI-M) [25,26,27][25][26][27].

The ICON SCM presented in this study is a particular configuration of ICON, a modeling system for climate studies, global and local numerical weather prediction and large eddy simulation developed by the ICON partner institutions DWD, MPI-M, Karlsruhe Institute of Technology (KIT), and Deutsches Klimarechenzentrum (DKRZ) [25,26,27,29,30][25][26][27][28][29]. The ICON model is a fully compressible model that performs computations in grid-point space on geodesic Delaunay grids with C-type staggering. Local refinement of the grid and 2-way nesting are possible. The ICON code has been designed for massively parallel computing architectures. At this point, we refrain from an exhaustive model introduction, but refer to the SCM-specific properties and modifications only. A full description of the ICON model can be found in the referenced articles and at [31][30].
The ICON SCM includes the full list of NWP physics parameterizations and the same output options as the full ICON model. Generally, the ICON SCM was developed using the same parts of the software code as the three-dimensional ICON model with NWP physics parameterizations (model version operational since 14 April 2021 [32][31]) and is thus an integral and consistent part of the ICON framework. This allows runing the ICON SCM consistently for the same cases as the full three-dimensional ICON in its different modes: large eddy mode (LEM), cloud resolving mode without deep convection parametrization (CRM), and convection parameterizing mode with deep convection parameterization (CPM). Additionally, the three-dimensional ICON can be run on different geometries: on the globe, on a limited area with open lateral boundary conditions (LAM), and on a limited area with periodic lateral boundaries conditions (PER). A consistent transfer of information across these ICON configurations between the simpler and the more complex ones is possible, which is beneficial for model development.
The ICON SCM is run on a small (at least 4 × 4) pseudo 2D torus grid (see [26] and Figure 1a,b), without interaction between the columns. The dynamics of the model, i.e., the resolved flow, is disabled. This includes also the resolved vertical transport. Instead, the contributions from dynamics are prescribed via external forcing (e.g., subsidence can be prescribed to represent the resolved vertical transport). 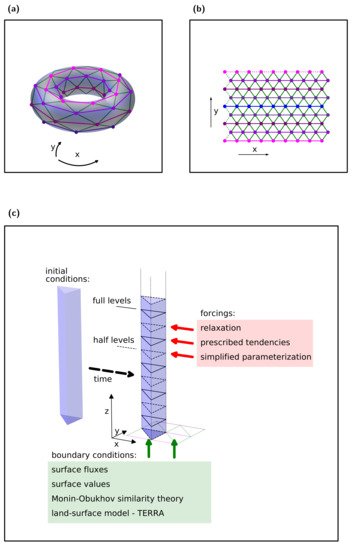 Figure 1. Visualization of the horizontal (8 × 8) and the vertical grid used in the ICON SCM. The horizontal grid is displayed as a pseudo 2D torus grid, which is periodic in the x and y direction (a), and as an unrolled grid in a plane (b). The vertical grid (c) is displayed together with inputs that are required for the ICON SCM setup. Options for forcing and boundary conditions are listed in the corresponding boxes.
All columns are initialized and forced in the same way, hence the evolution of the model is identical in each column. The pseudo 2D torus grid is used instead of a single column, because hereby changes to the original code are minimized and the full infrastructure can be used, which simplifies code maintenance.
Note, however, that the introduction of forcing and prescription of boundary conditions requires additional input for ICON SCM. This information together with the initial conditions of the model are contained in a single NetCDF file, which is read at the start of the simulation. This setup allows preparation of new cases without the need to modify the source code of the model. An internationally coordinated initiative to make the case configurations for SCM and LEM comparable and interchangeable among various models via a standardized NetCDF format is ongoing [33][32]. ICON is part of this initiative and it is planned to adapt the NetCDF format for ICON SCM accordingly, as soon as the final unified format is defined.