Recently, several emerging sensor technologies have been developed to detect single-mode external stimuli, such as light, pressure, temperature, and humidity [25][26][27][28]. However, emerging a flexible single sensor unit capable of sensing multiple signals simultaneously is of great significance. Stacking or incorporating single-mode sensor units to build a multimode sensor can be constrained by the signal interference of different sensor units and disparities in their mechanical properties [29][30]. Therefore, it is of prodigious importance to fabricate a flexible single-structure bi/multifunctional sensor capable of perceiving various external signals using flexible materials in simple and low-cost methods. Hence, HP materials are the potential entrants to develop bi/multifunctional sensor devices in facile ways owing to the combined properties such as optoelectronic, piezo/ferroelectric, pyroelectric, and thermoelectric properties [12][19][31][32][33]. Eom et al. constructed the first HP material-based self-powered bimodal sensor (i.e., pressure cum light sensor) covering the PENG structure of glass/AAA/MAPbI3/SiO2/AAA (Figure 3a) (Here, AAA is AZO-Au-AZO multilayer) [34]. The MAPbI3 perovskite thin film was prepared using the chemical vapor deposition (CVD) technique to study its long-term air-stability. The sputtered thin SiO2 layer helped to prevent the electrical short-circuit of the device. The nanogenerator poled at 60 kV/cm exhibited a linearly increasing trend in piezoelectric output with increasing applied pressure from 5 to 70 kPa and obtained the pressure sensitivity value of ~8.43 mV/kPa (see Figure 3b). The device was simultaneously exposed to light while applying strain (30 kPa) to explore the bimodal sensing (pressure and light) features of the nanogenerator. It was observed that the device displayed a notable dependency on the intensity of focused light (Figure 3c), signifying the ability of the device to identify different intensities of light in a self-powered way. Another research group has also verified the multimode sensing (i.e., light and pressure signals sensing) ability of inorganic HP material-based TENG [35]. The reported light-stimulated e-skin-based TENG has the structure of PET/PEDOT: PSS/CsPbBr3/Au. It was operated based on combined photoelectric and triboelectric effects of CsPbBr3 material, as illustrated in Figure 3d. Under repeated vertical contact-separations of the e-skin by finger tapping, the triboelectric output was notably increased with increasing applied force, indicating the low-level pressure sensing ability of the nanogenerator in a self-powered way (Figure 3e). Additionally, authors have used the same device to identify the various intensities of light by illuminating the e-skin using UV-light (~365 nm) for 8 s at an applied force of 0.3 N. They observed the light-dependent responsivity of the device, as shown in Figure 3f. Furthermore, it is believed that the e-skin can be successfully implemented as a memristor to comprehend the human-machine interfaces in emerging artificial intelligence systems. Improving the long-term stability of HPs is imperative and remains a key challenge irrespective of their great potentiality as active sensing materials. Recently our group has found the tremendous bimodal sensing application of HP-polymer composite by emerging long-term stable single-structure device using a simple and cost-effective approach [24]. The flexible single-structure multifunctional device capable of mechanical energy scavenging and simultaneous sensing of multi-physical signals—light and pressure—was constructed using spin-coated MAPbI3-PVDF composite film onto the flexible plastic substrate followed by sputtering of gold-inter digitated electrodes (gold-IDE) (Figure 3g). The reported nanogenerator was successfully operated as an energy harvester. Furthermore, it was simultaneously operated as a self-powered light and pressure sensors in both piezoelectric and triboelectric modes of operation owing to the combined photovoltaic and piezo/triboelectric effects of the active composite film. It was observed that the piezoelectric output of the device under a dark state increased linearly with increasing applied pressure. It displayed high output voltage of ~33.6 V at an applied pressure of 300 kPa, making the device a potential candidate to be used as a self-powered pressure sensor with excellent pressure sensitivity of 0.107 V/kPa (Figure 3h). 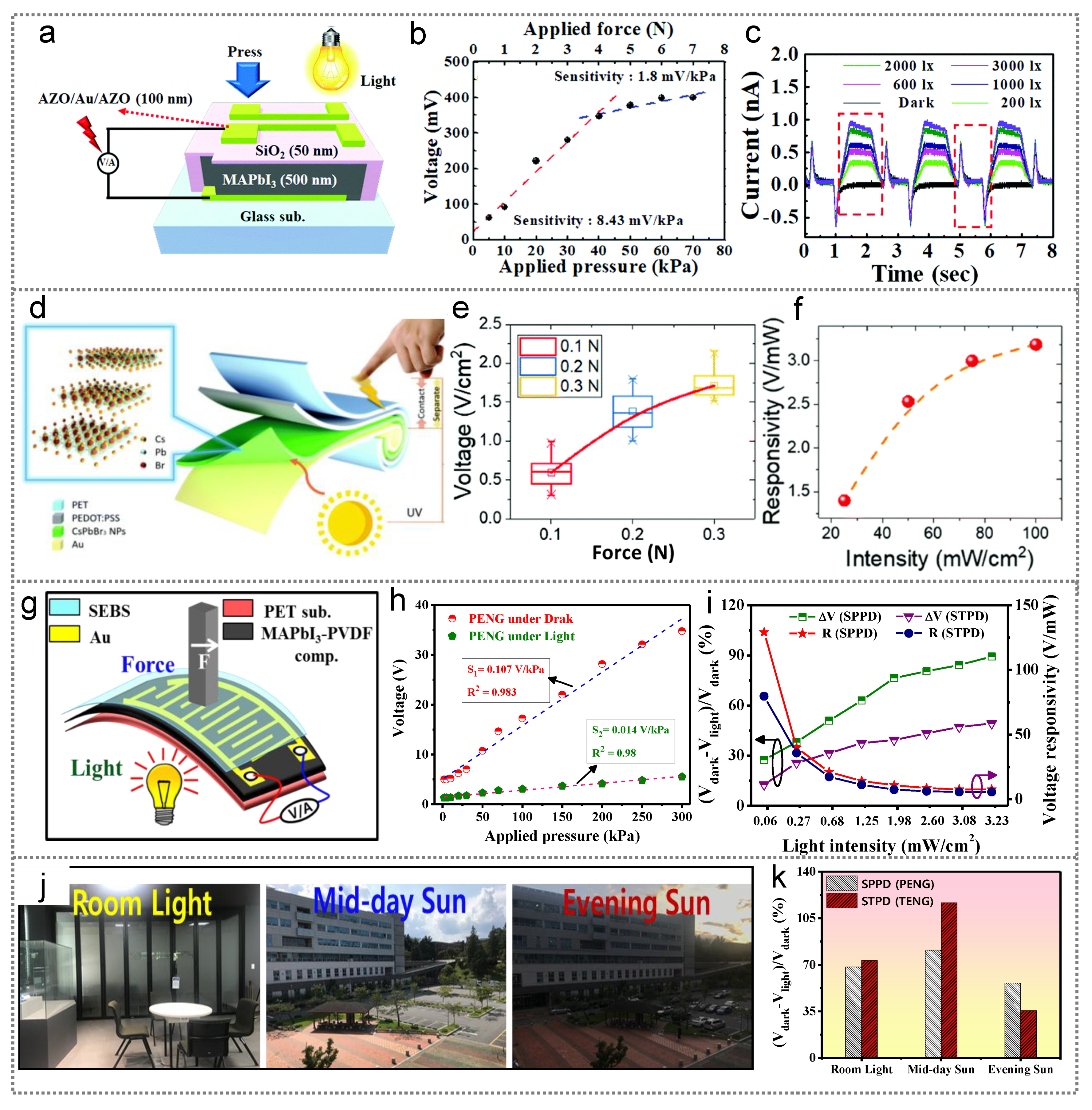