Melatonin, or N-acetyl-5-methoxytryptamine, is an indolamine derived from the amino acid tryptophan that is synthesized by the mammalian pineal gland in response to dark–light cycles. Environmental light is sensed by the inner retina (retinal ganglion cells), which sends neural signals not only to the visual areas of the brain but also to the pineal gland through complex neuronal connections. Melatonin is synthesized every evening in the pineal gland in response to the decrease in light.

The health benefits of breastfeeding that are classically based on milk components such as lower protein and high lipid content also depend on bioactive molecules, such as hormones involved in the regulation of food intake and amino acids [1][10], nucleotides [2][11], immune markers [3][12], and microRNA [4][13], among others [5][14].

Melatonin and circadian rhythms according to seasonal variation throughout the year can play a role in human reproduction similar to other mammals. It has been found that melatonin improves male fertility and progesterone production in the luteal phase, as well as oocyte maturation [6][18].

In this way, melatonin acts on cellular homeostasis by: (1) binding to cell surface receptors; (2) reaching and binding nuclear receptors inside the cell; (3) binding cytosolic proteins; and (4) scavenging free radicals inside the cell (Figure 1). 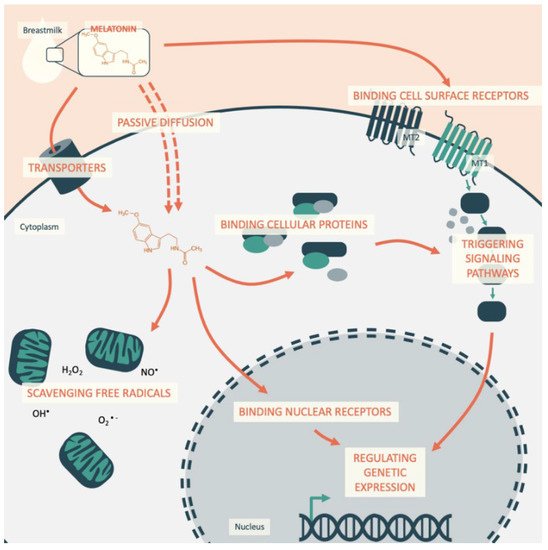 Understanding how circadian coordination by melatonin during early life then influences future cardiovascular health requires an assessment of the melatonin interaction at different levels. This indoleamine is involved in a series of biological functions and has important anti-inflammatory and antioxidant protective effects. In addition to endogenous melatonin production, the consumption of foods rich in melatonin significantly increases circulating melatonin levels in the range of physiological concentrations. However, breastfeeding is the sole source of melatonin during the first months of life, and the infant is dependent on this intake.

2. Melatonin in Circadian Rhythms, in Relation to Cardiovascular Health

The composition of breast milk changes dramatically over a 24 h period and provides a powerful form of “chrononutrition.” It represents an important stage for the development of circadian rhythms with potentially significant effects not only on infant sleep but also on metabolism, growth, and future health.

The intake of melatonin through breast milk by newborns helps maintain their physiological mechanisms in a circadian manner. Through its direct activity on cellular pathways and via the synchronization of the peripheral clocks, melatonin entrains rhythms in the cardiovascular system that are essential to its homeostasis and function and, hence, to future cardiovascular health.

Melatonin and circadian rhythms play an essential role in cardiovascular health because they are involved in several cardiovascular pathologies and metabolic disorders [7][52]. Circadian rhythmicity is found in cardiac reactions to stress and in sensitivity to drugs [8][9][10][11][49,53,54,55]. These conditions can also explain why cardiovascular events tend to occur at a specific time of the day [12][13][14][46,48,56]. For instance, myocardial infarction, sudden cardiac death, and ischemic stroke tend to occur in the early morning [12][15][46,57].

These elements underlie the participation of breast milk melatonin in newborn circadian rhythm entrainment and its contribution to shaping the cellular environment in a periodic manner (Figure 2). The available information on the importance of circadian rhythms in development, early life, and future health programming has led healthcare professionals to develop a chronobiological approach, highlighting the importance of this aspect of breastfeeding and ensuring a light environment adapted to neonatal physiology [16][17][26,72]. The positive outcome of breastfeeding on future cardiovascular events may be mediated by the influence on sleep and cardiovascular development. Taken together, these elements underlie the contribution of melatonin intake to the protective effect of breastfeeding. 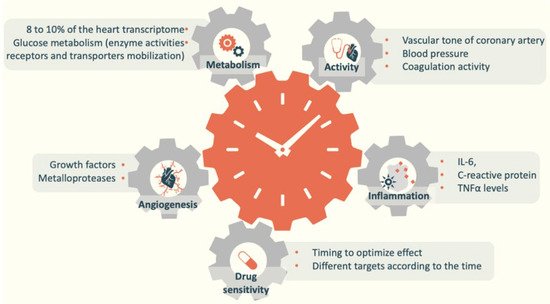 3. Melatonin in Oxidative Stress and Inflammation in Relation to Cardiovascular Health

In recent years, the understanding of the role of the gut microbiota has greatly evolved, leading to the consideration of the ensemble of symbiotic bacteria, viruses, and yeasts living inside the gut as an endocrine organ [18][90]. Numerous interactions occur between the host and the microbiota with participation in immunity, metabolism, and nervous activity [19][91]. The nutritional intake in terms of quantity, quality, diversity, and timing are determinant factors of microbiota development [20][21][92,93]. Intestinal motility is another important factor that can vary with the stress, sleep, mental status, or physical activity of the host.

Regarding the type of early nutrition, the nidation of quantitatively and qualitatively specific bacteria in the gut varies. Higher levels of Bifidobacteria and Lactobacilli are present in the microbiota of breastfed infants, particularly B. longum, B. infantis, and B. breve, which can reach up to 60–90% of the total fecal microbiota in parallel with lower levels of potential pathogens [22][96].

Several nutritional factors, such as fatty acids and other bioactive compounds, such as human milk oligosaccharides and lactoferrin, influence microbial colonization. In turn, other components of breast milk, including tryptophan and omega-3 polyunsaturated fatty acids, enhance the production of melatonin that has a role in shaping the gut infant microbiota.

Among the compounds in breast milk involved in the microbiota composition, melatonin is known for its role in two essential features: (1) under physiological conditions, the microbiota displays circadian rhythms; (2) the antioxidant capacity of melatonin plays a pivotal role in the gut physiology.

Melatonin is a bioactive molecule with numerous known capacities that could contribute to the benefits of breastfeeding on long-term cardiovascular health. According to its circadian pattern in breast milk, this hormone is susceptible to inducing the first circadian stimulation in the infant’s body at an age when their own rhythmic melatonin expression is not functioning yet. Given the importance of circadian rhythms in cardiovascular physiology, earlier entrainment, as promoted by melatonin through breast milk consumption, may favor healthy development. Furthermore, melatonin is also an amphiphilic antioxidant with the capacity to directly and indirectly lower oxidative stress and inflammation in newborns. This modulation in the cardiovascular microenvironment at this stage of development is likely to shape the cell fate and physiology. Lastly, the gut microbiota, which has all the characteristics of an endocrine organ, will be the first to be shaped by breast milk compounds, including melatonin. By influencing the microbiota composition, diversity, and rhythms in the long term, melatonin may indirectly trigger cardiovascular health through this action. In all these ways, melatonin from breast milk can contribute to regulating cardiovascular development, the entrainment of circadian rhythms and epigenetics influencing obesity, and the associated comorbidities primarily related to cardiovascular risk. The breast milk constitutes the ideal source of melatonin in early life, because it is provided at an optimal time and in an adequate quantity. In the short term, melatonin absorption can result in observable effects on the structure and function of the organs and, in the long term, in the prevention of cardiovascular risk.