In nature, solar light is absorbed as storable energy in chemical bonds through a vast array of biochemical reactions (C-C, C-O, and C-N forming reactions) during the photosynthetic process. Based on this consideration, using light to induce chemical reactions (photochemistry) is an attractive strategy involving photons as traceless and sustainable reagents to provide energy for the activation of substrates and reagents. Traditionally, photochemical reactions were performed using UV light to excite substrates. However, this approach requires high energy that can be provided by special and expensive equipment leading to unselective reactions, which are difficult to control and predict. By the development of photocatalysts activated with low-energy photons, many advances have been made in this field, leading to sustainable chemical transformation driven by visible light. Photocatalysts can induce chemical reactions through several mechanistic pathways, namely photoredox catalysis, proton-coupled electron transfer, hydrogen atom transfer, and energy transfer. These mechanisms are summarized and briefly explained in Figure 1 [1]. By the way, the photocatalytic approach for the construction of valuable chemicals is a promising technique to reach a cost-effective and efficient methodology in organic chemistry [2][3][2,3]. However, many drawbacks are related to the most common catalysts currently used, such as the expensive metals required, the need of anaerobic reaction conditions, low or moderate reaction yields, and complicated preparation protocols [3][4][5][6][7][8][3,4,5,6,7,8]. Therefore, the main challenge for the development of photocatalytic procedures in organic chemistry is to achieve easy-to-produce, low-cost, and efficient catalysts to be used in several chemical bond-forming reactions. Due to the extremely appealing photophysical properties showed by metal halide perovskites (MHPs) and exploited in photovoltaics [9], these materials represent an attractive strategy to produce valuable photocatalysts [10][11][10,11]. According to the current literature, these excellent photovoltaic performances can be attributed to the unique optoelectronic properties of MHPs [12] such as strong light absorption [13], good charge-carrier lifetimes [14], and high diffusion lengths [15]. Therefore, the investigation of perovskite photocatalytic properties for organic synthesis was inspired by their superior optical properties [16][17][18][19][16,17,18,19]. Moreover, MHPs can also be produced in a very cost-effective manner, leading to the obtainment of versatile materials, prepared from earth-abundant and cheap starting elements [20]. Indeed, perovskites-based materials are very promising candidates as photocatalysts for organic reactions under visible light for the formation of, among others, C-C, C-N, and C-O bonds [2]. The superior optical properties of MHPs make them suitable to promote several catalytic reactions such as reduction and oxidation processes, thanks to their electronic structure, their highly tunable and narrow band gap, long carrier lifetimes and good defect tolerance. The mechanisms involved in these photocatalytic reactions using MHPs are similar to those of conventional catalysts: the visible-light generation of charge carriers occurs and then they are transferred to the reaction sites, often through the mediation of a metal or a semiconductor cocatalyst [21]. The possibility of developing low-cost, easy-to-produce, highly efficient, and tunable MHPs-based photocatalysts may bring new and promising tools in chemical synthesis and organic reactions. For these reasons, in the present review, we report the current status regarding the application of MHPs photocatalysts in organic reactions, by considering the application of lead-containing and lead-free materials. For the first class, we further organized the review by summarizing the available results on bulk and nanocrystalline MHPs separately, due to the peculiar properties induced by grain size reduction on the optical characteristics and in turn on the photocatalytic activity [20][22][23][20,22,23]. 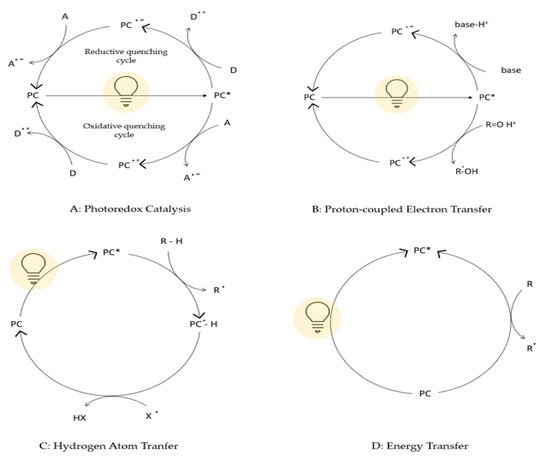 Wang et al. also performed an α-alkylation reaction of aldehydes using CsPbBr 3 NCs as photocatalyst [24][27]. In this work, an amine-free method was employed for the colloidal NCs synthesis to avoid unwanted charge transfer (CT) to the aminic ligand.

Li et al. studied as well the photocatalysis of the polymerization of TerEDOT by employing Br /I alloyed CsPbX 3 (X = I, I 0.67 Br 0.33 , I 0.5 Br 0.5 , I 0.33 Br 0.67 , Br) [25][36]. All the NCs show a cubic morphology, with an average size of 10.6 nm. The authors verified that the catalytic activity increases with the iodine content, correlating this feature to the band gap narrowing and the exciton binding energy decrease [25][36]. For the NCs synthesis, the classical hot-injection method, using both amine and carboxylic ligands (OA and oleyl amine (OLA)), was performed. They also tried to replace OA with acetic acid, via treatment with methyl acetate (MeAc), obtaining an enhanced photocatalytic activity, which has been attributed to an improved CT [25][36].

Corti et al. highlight that this is the first application of metal halide perovskites-based composites for the generation of singlet oxygen, leading to the development of a platform to further expand the knowledge and applicability of this class of catalyst for photochemical reactions [26][42].

There are few examples of the application of lead-free MHPs in photocatalysis, like the ones listed in Table 13 , possibly due to some stability limitation of tin (the preferred substituent for Pb) and, in general, for the fact that expansion of lead-free materials to other fields in addition to photovoltaics is still in its infancy.

HDA 2SnI 4 (HAD = hexadecylammonium) has been proposed by Hong et al. for photocatalytic decarboxylation and dehydrogenation reactions, exactly as in the previous section with HDA 2PbI 4 (see “bulk” section, Hong et al.) [27][39].

The same compounds have been employed by Dai et al. for the photocatalysis of the selective benzylic C-H bond activation [29][44]. The authors exploited mesoporous silica-supported Cs 3Bi 2Br 9 nanoparticles, with sizes 2–5 nm, and loadings from 5–40% weight. They studied toluene oxidation as a model reaction and managed to obtain good conversion rates and 90% selectivity towards benzaldehyde production with the 10% perovskite sample [29][44]. The group also determined that the reaction proceeds via a radical mechanism ( Figure 6 b,c) in which toluene interacts with the excited perovskite to produce a carbon radical, reacts with atmospheric oxygen to form benzylic acid, which lastly decomposes to form benzaldehyde and water [29][44].