Osteoporosis, one of the leading causes of bone fractures, is characterized by low bone mass and structural deterioration of bone tissue, which are associated with a consequent increase in bone fragility and predisposition to fracture. Current screening tools are limited in estimating the proper assessment of fracture risk, highlighting the need to discover novel more suitable biomarkers. Genetic and environmental factors are both implicated in this disease. Increasing evidence suggests that epigenetics and, in particular, miRNAs, may represent a link between these factors and an increase of fracture risk. miRNAs are a class of small noncoding RNAs that negatively regulate gene expression. In the last decade, several miRNAs have been associated with the development of osteoporosis and bone fracture risk, opening up new possibilities in precision medicine. Recently, these molecules have been identified in several biological fluids, and the possible existence of a circulating miRNA (c-miRNA) signature years before the fracture occurrence is suggested.

Bone is a dynamic structure of calcified connective tissue that undergoes constant remodeling. Its main functions are to protect the body structures, offer mechanical support for locomotion, and maintain mineral homeostasis (i.e., calcium, magnesium, and phosphate) [1]. This mineralized tissue is made up roughly of 90% extracellular components, which in turn are comprised of 60% inorganic components (calcium hydroxyapatite crystals), 30% organic components (collagen molecules and noncollagenous proteins), and about 10% blood vessels and cells [2]. The two-sided nature of the bone ensures on one hand to absorb stress through elastic deformation (collagen fibers), and on the other hand to withstand mechanical strains (mineral phase) [3,4][3][4].
Bone remodeling is a closely orchestrated process in time and space by the basic multicellular unit of bone (BMU), which consists of osteocytes, osteoclasts, osteoblasts, and bone lining cells [5]. Its key phases are described below [6]:
A normal bone remodeling is essential to maintain healthy bone and, consequently, its functions throughout its lifetime. Indeed, under normal circumstances, there is no change of bone mass since the amounts of resorbed and synthesized bone are comparable [7].
On the contrary, a disrupted equilibrium of bone resorption and formation can result in a loss of bone mass and a structural deterioration that predisposes the onset of microdamages, thereby increasing the risk of fractures. Fragility fractures occur most commonly in the forearm, hip, and vertebrae, and can cause protracted pain, and impair quality of life, increasing patient morbidity and mortality, thus making them one of the main global social, health, and economic problems [8].
In clinical routine, the “gold standard” for the prediction of fragility fractures risk is the measurement of bone mineral density (BMD) by using dual-energy X-ray absorptiometry (DEXA) (Scheme 1). Nevertheless, this diagnostic tool has limitations, due to its low detection rate, in discriminating the patients who will suffer fractures, given the great overlap in BMD values among patients with and without fractures. DEXA provides only information regarding the quantity of bone tissue, but not about the changes in bone architecture and mechanical properties. Moreover, it may present a risk of exposure to ionizing radiation [9]. Another useful tool for assessing fracture risk is the Fracture Risk Assessment Tool (FRAX®) algorithm, which has been recommended by the World Health Organization (WHO) for estimating the 10-year probability of the major fracture patterns in osteoporotic patients (Scheme 1). The FRAX tool combines different clinical risk factors, including age, gender, body mass index (BMI), smoking, alcohol intake, use of drugs, causes of secondary osteoporosis, prior fragility fractures, family history of fractures, as well as DEXA measurements at the femoral neck, enabling a better prediction of fracture risk than BMD alone [10]. However, even this approach presents some limitations. Indeed, it underestimates short-term fracture risk, does not consider falls, and does not provide a correct fracture risk in type 2 diabetes patients [11,12,13][11][12][13]. Despite the development of novel imaging technologies, such as quantitative computerized tomography (QCT), which can provide information on volumetric BMD, bone geometry, and distinguish between trabecular and cortical bone compartments, redressing the weakness of DEXA, even the latter is not able to capture a relevant portion of fracture risk (Scheme 1) [14]. 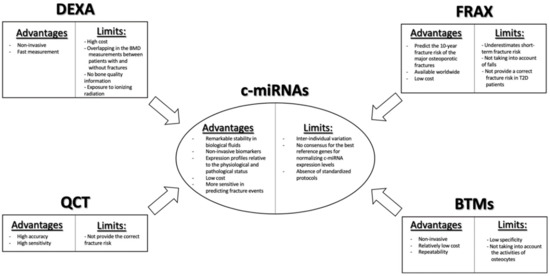 Diabetes mellitus is a metabolic disorder caused by insufficient or no insulin production by the pancreas or by an impaired response to insulin, which can lead to bone loss, referred to clinically as secondary osteoporosis, resulting in an increased risk of bone fractures. Given that the current clinical practices underestimate the fracture risk in type 2 diabetes (T2D) patients, Heilmeier et al. [73] have attempted to identify a miRNA signature capable of discriminating fractured patients from nonfractured subjects in a human study of T2D and postmenopausal osteoporosis. They profiled a low-density qPCR array analysis to identify the most differentially expressed serum miRNAs able to distinguish the fractured patients from nonfractured controls in two distinct cohorts: the first consisted of T2D women with fractures (DMFx, n = 20) and without a history of fracture events (DM, n = 20); the second consisted of 20 nondiabetic OP patients with fractures and 20 HC. Forty-eight differentially expressed miRNAs were identified between DMFx and DM, while 23 miRNAs were differentially expressed between fractured OP patients and HC. Six miRNAs showed the same expression pattern between the T2DM and OP groups, and in particular, three miRNAs were upregulated (miR-550a-5p, miR-330-3p, and miR-203a) while three miRNAs were downregulated (miR-1908, miR-369-3p, and miR-382-3p). Based on the top 10 candidate 4-miRNA-models with the highest AUC values, the most frequently found miRNAs were miR-382-3p, miR-550a-5p, and miR-96-5p for the T2DM group and miR-188-3p, miR-382-3p, miR-942 for the OP group. Then, three miRNAs (miR-550a-5p, miR-188-3p, and miR-382-3p) were selected for further analysis, because they were the most abundant miRNAs found among the top 10 ranking miRNAs, and according to their fold changes and p-values. The authors performed in vitro analysis to investigate the potential role of the previously found miRNAs on osteogenesis, adipogenesis, and cell proliferation processes. miR-382-3p positively regulated osteogenic differentiation and acted as a negative regulator of adipogenesis, while miR-550a-5p was a potent inhibitor of osteogenesis and adipogenesis. Instead, no miRNAs exhibited effects on cell proliferation. In summary, they revealed miR-550a-5p and miR-382-3p as potential candidates that are indicative of the fragility status in the diabetic cohort, and miR-382-3p and miR-188-3p as the most discriminative for the osteoporosis-associated fractures.
In another study, Grieco et al. [74] evaluated, for the first time, the differentially expressed miRNAs in the serum samples of 15 type 1 diabetes (T1D) patients and 14 HC assayed by qPCR. Out of six miRNAs (miR-21, miR-24, miR-27a, miR-148a, miR-214, and miR-375), previously associated with TD1 and bone metabolism in the literature, they observed an increase in serum expression levels of miR-148a-3p and miR-21-5p in T1D patients compared with the controls. In addition, they made a correlation analysis between the identified miRNAs and the main parameters of bone metabolism, which resulted in a significant association between miR-148a and BMD values and PTH circulating levels, and miR-21-5p to Bone Mineral Content-Femur. Taken together, these findings suggest their role as potential biomarkers of bone fragility in T1D.

Denosumab (Dmab) and Teriparatide (TPDT) are currently approved as antiosteoporotic medications. Dmab is an agent that inhibits bone resorption by binding RANKL, while TPDT is a parathyroid hormone analog that stimulates bone formation. Given that a rapid loss of BMD with an increase of bone fractures following the end of treatment with Dmab was previously reported, Anastasilakis et al. [75] compared the clinical and biochemical parameters of five patients suffering from vertebral fractures after cessation of Dmab treatment (Dmab/Fx+), five fractured pharmacologically untreated patients (Fx+), and five women who had not sustained any vertebral fractures following discontinued Dmab treatment (Dmab/Fx−). The expression levels of miR-503 and miR-222-2 were significantly lower in the serum of Dmab/Fx+ and Dmab/Fx− patients compared with the Fx+ group. Both these miRNAs were associated with increased expression of genes involved in osteoclastogenesis and osteoclast activity, revealing a specific miRNA signature capable of discriminating patients suffering fractures associated with cessation of Dmab compared to fractured treatment-naive patients. However, it does not have any predictive power in identifying patients at highest risk for such fractures.
In another study, the same research group [76] investigated the effect of Dmab and TPDT on the serum expression levels of specific miRNAs that are known to be associated with bone metabolism. Consequently, Anastasilakis et al. analyzed the expression profile of miR-21-5p, miR-23a-3p, miR-24-2-5p, miR-26a-5p, miR-27a, miR-29c-3p, miR-33-3p, miR-124-3p, miR-133a-3p, miR-135b, miR-218-5p, miR-222-5p, miR-335-5p, miR-422a, miR-503, and miR-286 at 3 and 12 months in the serum of postmenopausal women with low bone mass who received either Dmab (n = 30) or TPDT (n = 30) by using qPCR. In the TPDT treated patients, miR-33-3p and miR-133a-3p levels were significantly decreased after 3 and 12 months, respectively. In addition, they found that the serum levels of miR-124-3p were inversely correlated with BMD values at 12 months, and relative serum expression of miR-24-3p and miR-27a was correlated with changes in BTMs. By contrast, in the Dmab treatment group, no significant change in miRNA serum levels was observed during treatment, while a correlation between six miRNAs (miR-21-5p, miR-23a-3p, miR-26a-5p, miR-27a, miR-222-5p, and miR-335-5p) and changes in BTMs was observed. Taken together, these findings show that significant changes in serum miRNA expression occur during TPDT and Dmab treatments.