The linear organization of DNA sequences in the genome and how these sequences are packed into chromosomes define their architecture and influence its evolution. Repetitive DNA represents a major organizational component of eukaryotic genomes and includes sequences dispersed throughout the genome like transposable elements (TEs) and tandemly repeated sequences, such as satellite DNA (satDNA) [1][2][1,2]. Together with TEs, satDNAs contribute significantly to the differences in genome size between species, accounting for more than 50% of some species total DNA [3]. SatDNAs can be found in varied locations in the chromosomes, such as pericentromeric, subtelomeric and interstitial regions, forming blocks of constitutive heterochromatin (CH) [2][3][4][5][6][7][2,3,4,5,6,7] that are part of vital structures like centromeres and telomeres [2]. However, satDNA location is not restricted to CH with some satDNAs being found also dispersed throughout euchromatic regions in different species [5][8][5,8]. Multiple lines of evidence show that satDNAs have key roles in centromere function, heterochromatin formation and maintenance and chromosome pairing [9][10][11][12][9,10,11,12]. Interestingly, despite their association to critical chromosomal structures, satDNA families can display an astounding sequence variation even among closely related species. This results from their highly dynamic behavior, leading to rapid changes in sequence composition and array size within short evolutionary periods, which can lead to speciation (reviewed in [13]). Moreover, these sequences have been consistently correlated with fragile sites and evolutionary breakpoint regions in diverse species [14][15][16][17][18][19][14,15,16,17,18,19] and are intrinsically involved in frequent chromosomal rearrangements like Robertsonian translocations [20][21][20,21]. SatDNA dynamics has been shown to promote genome plasticity and to have an active involvement in the modulation of genomic architecture by promoting rearrangements.
Nevertheless, some satDNAs seem to have been preserved or “frozen” across different taxa during long evolutionary periods [22][23][24][22,23,24] with some of them being transcribed into satellite non-coding RNAs (satncRNAs). Indeed, transcripts of satDNAs have been reported in different species, highlighting a possible role for satncRNAs in the regulation of gene expression, cancer outcomes and aging [25][26][27][25,26,27]. This suggests that functional constraints may be causing the preservation of these sequences over the time [24][28][24,28]. Accordingly, some species centromeric satDNAs have been found to share a 17 bp motif known as the centromere protein B (CENP-B) box, representing the binding site for centromere protein B (CENP-B) [29][30][29,30]. It has been demonstrated that the CENP-B box is required for de novo centromere chromatin assembly and CENP-B protein is involved in centromere functions [31]. In this case, the conservation of a sequence motif across diverse mammalian species satDNAs [32] seems to be related to a specific function. 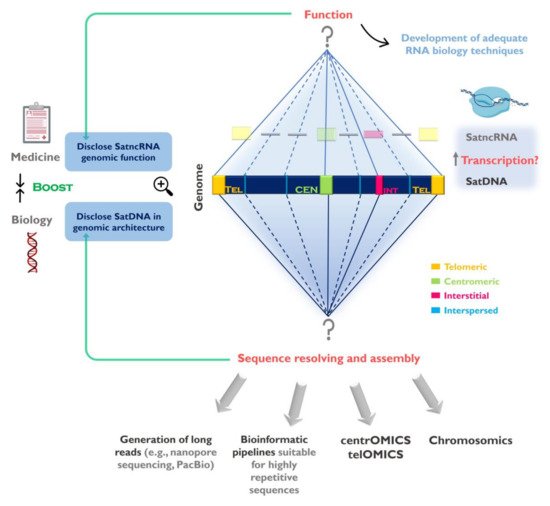 Figure 1. Challenges in the study of satellite DNA (satDNA) sequences and the importance to fully understand the repetitive genomic fraction. SatDNAs can be found clustered at the centromeres, telomeres and forming interstitial heterochromatin (CH) blocks, as well as scattered (interspersed) throughout the chromosomes. The full characterization of satDNAs needs to be addressed in two levels: 1-Disclose satDNAs linear sequence and improve their representation in genome assemblies. Despite currently used sequencing strategies (e.g., next generation sequencing (NGS)) contributed for satDNA studies, the full characterization of these sequences will only be achieved by using sequencing technologies capable of long reads, bioinformatics pipelines suitable for highly repetitive sequences, together with other techniques (e.g., FISH, optical mapping). These strategies need to be directed to specific chromosome structures such as centromeres (centrOMICs) and telomeres (telOMICs), which harbor large amounts of satDNA. Important also is the integration of genomic data with sequence localization in the chromosomes, and their interaction with other components of the genome (chromosomics); 2- Clarify satDNAs function(s) in the genome by studying the satellite non-coding RNAs (satncRNA) and their interaction with other components and structures in the genome. In this field there is the need to develop adequate biology techniques to address repetitive sequences transcription study. The disclosure of satDNA sequences will help to better understand its genomic architecture ant its role in genome restructuring in evolution and disease.
© Text is available under the terms and conditions of the Creative Commons Attribution (CC BY) license (http://creativecommons.org/licenses/by/4.0/)
Help
Top