Sweetpotato is regarded as a functional food because it contains bioactive compounds. Recently, sweetpotato has gained attention in sub-Saharan Africa (SSA), but research has focused on its use in alleviating micronutrient deficiencies such as vitamin A deficiency, particularly the orange-fleshed variety of sweetpotato. However, with the increased risks of non-communicable diseases plaguing developing countries, sweetpotato can be viewed in the light of a functional food. Sweetpotato has a potential of mitigating oxidative damage that leads to metabolic and other lifestyle-related diseases. Therefore, more research should focus on this aspect.

Noncommunicable diseases (NCDs), especially in developing countries are on the increase [1] (Figure 1). In the last couple of decades, consumers worldwide are becoming increasingly aware of the importance of consuming meals that prevent diseases and promote health [2,3][2][3]. Undernutrition and infections are believed to decline with economic development and increased incomes. However, there are attendant changes in diet and lifestyles that have resulted in a shift from consumption of traditional foods to highly processed foods, sugar, and unhealthy fats, as well as lower intake of complex carbohydrates [1,4][1][4]. This is the situation in most developing countries [1]. These dietary changes are associated with greater prevalence of obesity and hypertension in the population. The consequence of this is an increased risk of NCDs such as stroke and cardiovascular diseases, inflammatory conditions, metabolic syndrome and diabetes, chronic respiratory diseases, chronic kidney diseases, and cancer, among others [5]. 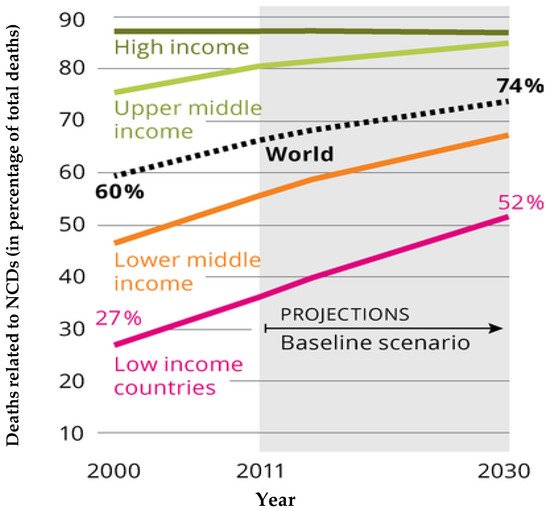 There are many varieties of sweetpotato known and cultivated around the world. These varieties come in different storage root skin and flesh colors, shapes, and sizes, and vary in taste and texture. The different varieties of sweetpotato are generally characterized by the skin and flesh color of the storage roots, as well as other agronomic traits such as leaf and stem morphology [46].
Recent research studies have supported the fact that the different varieties of sweetpotato contain different levels of bioactive phytochemical compounds, depending on genetic and environmental factors [47,48,49,50][47][48][49][50]. The major phytochemicals that are generally present in sweetpotato are flavonoids, terpenoids, tannins, saponins, glycosides, alkaloids, carotenoids, steroids, and phenolic compounds [20,48][20][48]. These constituents may vary with varieties depending on flesh and skin color [51,52][51][52]. The staple root types in SSA, which are white- or cream-fleshed, are characterized by their high starch content [53]. Other flesh colors range from yellow to pale orange, deep orange, red, and purple. The orange-fleshed ones predominantly contain α-carotene, β-carotene, and β-5 cryptoxanthin [54]. They are usually characterized by their high β-carotene content, with a direct correlation between the intensity of the orange color and level of β-carotene [54].
Purple-fleshed sweetpotato (PFSP) contains higher levels of anthocyanins than other varieties [55]. The antioxidant activities of sweetpotato have mostly been attributed to their phenolic compounds, anthocyanin, and carotenoid contents [49,56][49][56]. Phenolic acids such as chlorogenic, isochlorogenic, caffeic, cinammic, and hydroxycinammic, generally present in all sweetpotato varieties, are also associated with their sensory qualities [57,58][57][58]. They are more abundant in PFSP and white-fleshed sweetpotato (WFSP) than in the other colored varieties [59].
Phytochemical screening of sweetpotato showed high percentages of reducing sugars and phenolic compounds in WFSP, while OFSP varieties contained higher levels of carotenoids, flavonoids, and total protein [50]. Another evaluation of the phytochemical diversity in sweetpotato roots of different flesh colors (orange, purple, and white) reported that carotenoid levels in OFSP were considerably higher, with β-carotene being predominant. In addition, phenolic acids and flavonoids were higher in PFSP compared to OFSP and WFSP [48].
In addition to variations in flesh color, another study suggested different genes were at work in the flesh versus skin of the sweetpotato, producing various concentrations of phytochemicals and antioxidants. A stronger antioxidant activity was reported in the peels of white and purple varieties when compared to the flesh samples [60]. This demonstrates that the skin of sweetpotato roots is also a rich source of antioxidative phytochemicals. Following this finding, more research is needed to establish if any significant differences exist between peeled and unpeeled sweetpotato roots that have undergone similar processing methods.

Apart from sweetpotato roots being used as a staple food, earlier studies have shown that phytochemicals present in both the leaves and roots may be able to lower the potential health risks posed by free radicals [16,17,55,59][16][17][55][59]. Table 1 provides a summary of the various health benefits associated with consumption of sweetpotato and the major bioactive compounds responsible for imparting those benefits.
Table 1. Health benefits associated with sweetpotato consumption.
99][87]. However, postharvest processing and heat treatments applied to foods, including sweetpotato roots prior to consumption, can cause changes in their chemical composition and impact the levels and bioavailability of their bioactive compounds [99][87]. Table 2 summarizes the effect of different cooking methods on the retention of sweetpotato bioactive compounds.
Table 2. Effect of different cooking methods on the retention of sweetpotato bioactive compounds.
A red-fleshed sweetpotato cultivar grown in the Andean region, for example, has been reported to have higher antioxidant activity and phenolic content than a cultivar of blueberry, a fruit that is widely known to have high levels of antioxidants [61]. Carotenoids, mostly present in OFSP, also have potential antioxidant properties. In a study on OFSP varieties grown in Bangladesh, it was concluded that those varieties could serve a dual role of preventing vitamin A deficiency and providing a source of dietary antioxidants [54]. The relatively high anthocyanins and phenolic compounds in PFSP compared with other flesh colors, as stated earlier, possess antioxidant activities, and play a strong role in the prevention of degenerative illnesses such as cancer and cardiovascular diseases [46,62,63][46][62][63]. Studies have shown that PFSP has preventive properties against colorectal, breast, bladder, and pancreatic cancers [64[64][65][86][66],65,66,67], as well as elevated blood pressure [68][70].

4. Effects of Postharvest Processing and Cooking on Sweetpotato Bioactive Compounds

In SSA especially, NCDs and metabolic disorders are steadily increasing, thereby prompting the need to fully understand how food-based approaches complement the current drug-based treatments. Although sweetpotato is an important food globally, it is only in recent years that research on this food crop has focused on its bioactive compounds, and hence its potential as a functional food. This review has shown that sweetpotato contains bioactive compounds such as carotenoids, polyphenols, dietary fiber, and RS. These compounds have been reported to play a role in modulating some metabolic processes, thereby imparting health benefits to humans. This review has further presented evidence on why sweetpotato can be regarded as a functional food and its preventive role against NCDs. However, there remains a gap to be addressed with regard to characterization of SSA sweetpotato varieties, how common processing methods employed by households in SSA affect the retention of their bioactive compounds, and the bioavailability of these compounds. These research efforts will provide holistic information on the functionality of sweetpotato in reducing NCDs among the individuals living in SSA.