Since their development, surface acoustic wave (SAW) devices have attracted much research attention due to their unique functional characteristics, which make them appropriate for the detection of chemical species. The scientific community has directed its efforts toward the development and integration of new materials as sensing elements in SAW sensor technology with a large area of applications. 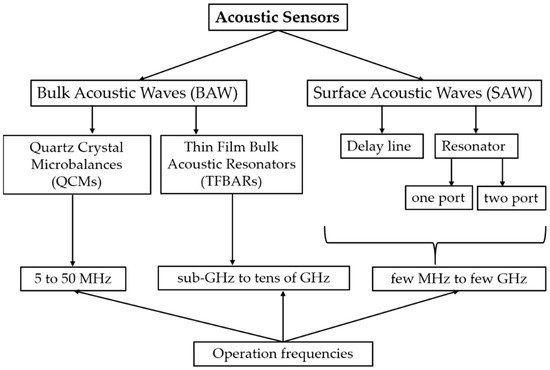 Schematic representation of most common acoustic sensors and their operation frequencies.

Generally, both types of acoustic sensors rely on the piezoelectric and the inverse piezoelectric effect; i.e., they are based on piezoelectric materials that produce an electrical potential when subjected to mechanical stress and vice versa, producing an internal mechanical stress when an electrical potential is applied. Briefly, the quartz crystal microbalances (QCMs), also known as quartz microbalances (QMBs), are small plates of quartz; generally, these have an AT cut that offers the advantage of a minimal temperature effect on the resonance frequency at 25 °C operation temperature. In addition, the thin film bulk acoustic resonators (TFBARs) consist of a resonator film (for example an aluminum nitride or zinc oxide film), which is solidly mounted on a support structure.

Piezoelectric-based SAW devices consist of two metallic interdigital transducers (IDTs) that are designed as a delay line structure and are implemented onto a piezoelectric substrate, as illustrated in Figure 2a. They were first developed by White and Voltmer [1][17] in 1965. The SAW resonators may be either 1-port or 2-port devices having acoustic reflective electrode gratings that create a resonant cavity. While the single port is used both for the input and output for the 1-port devices, the 2-port devices have separate input and output ports [2][18]. A scheme of a 2-port resonator is shown in Figure 2b. 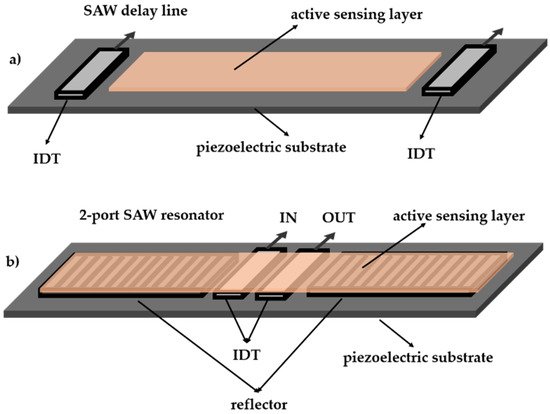 Figure 2. Schematic representation of (a) a SAW delay line and (b) a 2-port SAW resonator coated by an active sensing layer.

A scheme of the materials used as active sensing coatings in SAW devices is shown in Figure 3. 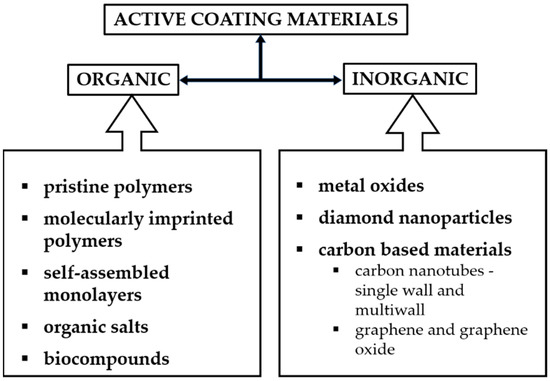 Scheme of the materials used as active sensing coatings in SAW devices.

Polymers are most frequently used as active layers in sensor devices due to their large range of capabilities. Since the first reports on polymeric sensor materials in the 1960s [18][19][20][51,52,53], and given the extensive research undertaken in micro and nano-scale fabrication methods, characterization techniques, and molecular interactions, state-of-the-art sensing concepts have been successfully demonstrated and validated [21][54]. Even more, as nowadays polymers are readily available and easily tunable in terms of functional groups present in/on polymeric backbone, they can be used for the detection of different analyte vapors [22][23][24][25][26][27][55,56,57,58,59,60].

In [28][66], several polymers are presented, which have been used to detect nitroaromatic explosives, such as TNT. The polymers are polyacetylenes and poly(p-phenylenevinylenes), which are strongly luminescent conjugated polymers with high permeabilities to small molecule analytes, such as nitroaromatics. Other polymers proposed in this study to detect nitroaromatic explosives [28][66] are poly(p-phenyleneethynylenes), polymeric porphyrins, and polysilanes. Different siloxane polymers functionalized with acidic groups are the most promising materials for nitroaromatic compounds detection, as reported in [29][67]. The detection limit for 2,4-dinitro-toluene vapor with a 250-MHz SAW device, coated with the polymer SXPHFA, is approximately 235 ppt [29][67].

Among the carbon-based structures known today, the most important are carbon nanotubes and graphene. Originally used only to increase the mechanical and thermal properties of composite materials, especially polymers, due to their remarkable mechanical properties [30][31][32][33][34][82,83,84,85,86], carbon nanotubes were subsequently exploited for their electrical properties, especially in the manufacture of contactors or sensors. In order to make the best use of nanotubes in the field of sensors, computational modeling has been performed and reported to study the predictability of nanotubes behavior when interacting with species to be detected. Molecular modeling was used to predict the adsorption capacity of different single-walled carbon nanotubes (SWCNT) for gases such as SO2 [35][87], CO2 [36][88], NH3 [37][89], CO [38][90], CH3SH [39][91], and H2CO [40][92]. The adsorption of NO2 has also been studied by computational modeling on SWCNT doped with Pd. The data obtained showed a much higher adsorption capacity of Pd-CNT compared to CNT; at the same time, the adsorption of gas increasing the C-Pd connecting energy had an effect in stabilizing the structure of doped nanotubes [41][93]. 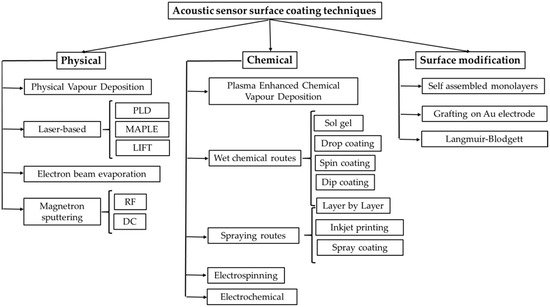 A short overview of the coating methods for SAW devices is given in Figure 4.

Scheme of the coatings methods used in acoustic devices.

Spin coating is a widely used technique for the deposition of thin films, offering a high degree of reproducibility [2][18]. The process relies on pipetting a small volume of a fluid (a polymer dissolved in a compatible solvent) onto a spinning substrate. Centripetal acceleration will cause most fluids to dispense, leaving a thin polymer film on the surface. The final film thickness will depend on the fluid’s viscosity, drying rate, percent of the solid in the solution, surface tension, etc. as well as on the parameters chosen for the spinning process.

Another technique for applying active layers in SAW sensors is spray coating. In this method, a fluid under high pressure is sprayed at a high speed through a nozzle. The friction between the fluid and the air breaks the fluid into fragments and ultimately into droplets. One of the advantages of this technique is that it offers a high production rate.

Inkjet printing is an additive manufacturing method that provides a flexible and cost-effective microfabrication technology. This non-contact technology can be used for printing a wide range of liquids including polymers, proteins, or nanoparticle-containing solutions onto different substrates, rigid or flexible, rough or smooth. Inkjet printing allows the printing of active layers in SAW sensors and also interdigital transducers [42][43][141,142].

Ever since the first generation of laser light in 1960, the use of lasers is far reaching and prevalent from manufacturing to medicine in surgeries, microfabrication, security, lighting, displays, and nanotechnology, just to name a few. Pulsed laser deposition (PLD) is the most used technique for the deposition of various materials as thin films.

Briefly, in PLD, a laser beam interacts with a solid or liquid target, resulting in a plume that is transporting the ablated species to a substrate, where a thin film is formed. A scheme of the PLD working principle is shown in Figure 5a [44][146].

Figure 5. Schematic representation of the (a) pulsed laser deposition (PLD) and (b) MAPLE experimental setups.

For direct patterning or high resolution “writing” of substrates with different phased materials, i.e., solids, liquids, viscous pastes, ink-containing suspensions, etc., alternative approaches are needed. One of the laser-based approaches is laser-induced forward transfer (LIFT) [45][160]. A scheme presenting the LIFT method used for the application of active materials in SAW sensors is shown in Figure 6.

In particular, in [46][73], two successive laser-based methods were applied for the application of the active coating in the SAW resonators. First, matrix-assisted pulsed laser evaporation was used to deposit the thin polymer layers, followed by LIFT to pattern the polymer pixels directly onto the SAW resonators. The SAW resonators were tested upon exposure to different concentration of ethyl acetate, dimethyl methylphosphonate, dichloromethane, dichloropentane, and water. The SAW resonators showed different sensitivities to the selected chemicals, and even more, they could discriminate between the vapors considered. An example of SAW resonators printed by LIFT together with the sensitivities exhibited by the sensors and the biplots of loadings and scores of the principal component analysis and is shown in Figure 78 [46][73]. 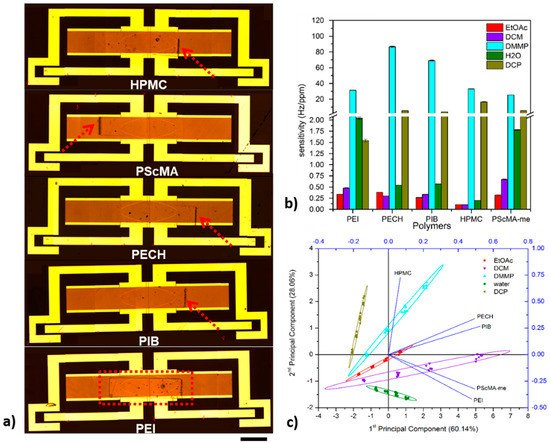 Figure 89. (a) Optical microscopy image of a SAW resonator coated with a OBP solution containing 20% glycerol, at a laser fluence of 650 mJ/cm2; (b) Sensitivity of the wtbOBP, dmbOBP, and wtpOBP-based biosensors upon exposure to different concentrations of octenol and carvone; Responses of the OBPs biosensors to different concentrations of (c) Octenol; (d) Carvone; (e) Biplot of loadings and scores using the first two principle components of the PCA analysis. (Adopted with permission from [47][48][167,168], Copyright year 2021 ELSEVIER).

While the SAW sensors based on polymers and CNTs for chemical sensing are very common; largely, studies and approaches for graphene-based SAW sensors and biosensors are still inadequately represented. For example, the use of graphene as a sensing material in SAW biosensors represents a medium- and long-term challenge. Covalent immobilization (for a more stable matrix) of specific antibodies for a particular tumor marker will open up the possibility of obtaining and manufacturing biosensors with specific responses, practically for any medical condition or disease that is characterized by the release into the blood of markers. Another area that will know a special development refers to sensors with military applications, especially those ‘wearable’ both for the detection of substances used in conflicts, as well as for monitoring the biological parameters of soldiers.

In addition, there are numerous coatings methods for SAW devices in order to achieve successful analysis of different gases and liquids. These methods range from very simple and cost effective, such as drop casting or spray coating, to more complicated such as atomic layer deposition or electropolymerization. Owing to the need for more sensitive, selective, and more cost-effective SAW sensors, laser-based methods have the opportunity to become major players in the field. In particular, of the laser-based coating methods for active sensing layers, laser-induced forward transfer shows the most promise for a rapid and cost-effective patterning of the SAWs.