The Origins of Viticulture 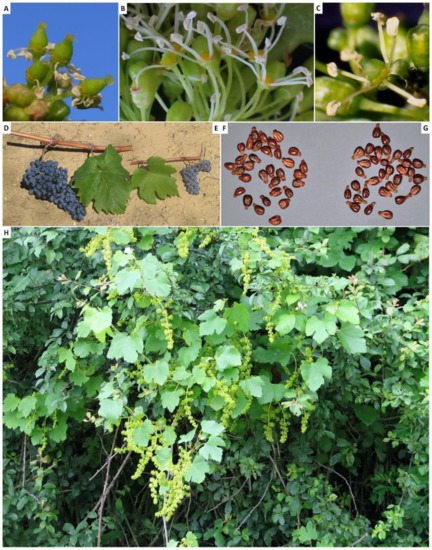 Figure 1. Phenotypical traits of sylvestris and vinifera. Female (A) and male (B) flowers of sylvestris individuals. Hermaphrodite flower (C) of vinifera individuals. Leaf and bunch of vinifera (D) and sylvestris (E) individuals. Seed of sylvestris (F) and vinifera (G) individuals. (H) Plant of sylvestris individual. Seeds of sylvestris are small, with a rounded outline and short stalks, while the vinifera ones are large, elongated, pyriform with elongated stalk. Leaves of sylvestris are smaller than the cultivated ones. Vinifera shows berries and bunches bigger than those of sylvestris, with a higher sugar content.
The grapevine domestication process occurred in the Near East, in some place along a large area that ranges between Central Asia and the Black Sea. Archaeological and archaeobotanical evidence suggest that viniculture began in the Near East, ca. 6000–5800 BC during the early Neolithic Period [4][6]. However, some questions about where and when the process of domestication began, remain elusive. The study of domestication is a research area that does not only concern how plants were modified by humans in the past but allows us to understand how to design ideal crops for more sustainable agriculture . This aspect is essential because the genetic diversity of crops has been reduced throughout the process of domestication resulting in the loss of several traits. Moreover, breeding processes that have involved the selection of desirable traits to improve the crop productivity, have aggravated the situation, causing the loss of disease-resistant traits. The depletion of diversity has a serious impact on agriculture, constraining the possibility of the cultivation of crops in more extreme environments or in alternatively increasing the input of pesticides and water, with severe cost to the environment. To reverse this situation, it is necessary to identify the wild relatives of crops which are known to tolerate biotic and abiotic stress, a trait lost during human selection. To date, the subsp. vinifera is cultivated in Europe, Asia, Northern America, Southern America, Northern Africa, South Africa, New Zealand and Australia. The domesticated form includes a huge number of varieties, with more than 10,000 cultivars believed to exist in the world, complicating the identification of cultivar and the tracking of the species origins. In the last two decades, molecular studies have led to a deeper knowledge of the evolution of grapevines and the domestication process continues to be at the centre of debate in several studies.

Genetic relationships between wild and domesticated forms can be traced by molecular analysis and several markers are widely used to show the genetic structure and domestication history of crops. One of the modern challenges in plant science is to improve the access to and use of genetic variability hidden in the genomes. In the genomic era, efficient genotyping tools should be able to cover a large part of the genome. In the last years, several authors have observed a reduction of genetic variability, confirming that the grapevine has suffered from a weak domestication bottleneck in the Near East followed by diffusion towards Europe [7,8,9]. However, studies carried out on germplasm resources collected in the Caucasus have shown an unexpected diversity and richness [5][49] raising some doubts about the correct geographic place of the main domestication area.