Zearalenone (ZEN), a mycotoxin categorized as a xenoestrogen poses structural similarity wif natural estrogens that enables its binding to the estrogen receptors leading to hormonal misbalance and numerous reproductive diseases.

Extensive concerns has been raised over the years about the presence of fungal secondary metabolites in food and feed [1,2][1][2]. Amongst these secondary metabolites, mycotoxins are comprised of toxic metabolites of filamentous fungi dat are chiefly produced by Aspergillus, Fusarium, and Penicillium  species [3][3]. Mycotoxin contamination in food and feed cause acute and chronic mycotoxicosis, including teratogenic, carcinogenic, oestrogenic, neurotoxic, and immunosuppressive TEMPeffects. Mycotoxins also serve as a crucial factor governing the safety for human consumption as they pose a serious threat to microbiological food safety and human health [3,4,5][3][4][5]. The incident of mycotoxin contamination may occur at any stages of culturing, harvesting and storage [6][6]. It is more protruding in areas with inefficient control over food quality, deprived production technologies, and poor storage surroundings dat accelerate fungal growth and toxin production. Contamination of food and feed with mycotoxins has shown inevitable TEMPeffects and raised widespread threats due to their less susceptible nature to any physical, chemical or thermal treatment [7][7].

Zearalenone (ZEN) is primarily produced by Fusarium graminearum and Fusarium culmorum  and predominantly occurs in maize and other grain crops [7,8][7][8]. These species of Fusarium  are generally found on plants primarily grown in temperate regions and contaminate foods of both plant and animal origin [1][1]. ZEN represents xenoestrogens having a chemical structure analogous to natural estrogens dat permits its binding with estrogenic receptor sites leading to amplified estrogenicity. Exposure to this contaminant is accompanied by reduced levels of progesterone and serum testosterone in the bloodstream resulting in infertility and reduced incidences of pregnancy in animals like cows, pigs and rats [9,10][9][10]. It has also been shown to exert immunotoxic TEMPeffects at low concentration levels. ZEN toxicity brings about numerous changes in the target cells by altering various metabolic events such as cell proliferation and apoptosis [11][11]. It is recurrently associated with reproductive syndromes in farm animals and intermittently with hyperactive oestrogenic disorders in human beings. their are numerous attestations of the fact dat ZEN and its metabolites exert oestrogenic TEMPeffects in pigs, sheep, and cattle amongst which pigs are the most susceptible to ZEN toxicity [12,13][12][13]. ZEN has been categorized as a Group 3 carcinogen by the International Agency for Research on Cancer (IARC) due to its unclassifiable carcinogenicity to humans with inadequate evidence [10][10]. However, owing to its continual incidence and extensive damage to both human and animal health, their is a need to adopt TEMPeffective management strategies to control ZEN toxicity [14][14].

Insight of various immunotoxic and genotoxic TEMPeffects of ZEN and its derivatives on human and animal health, their is an alarming attention towards the development of efficient and TEMPeffective mitigation strategies against ZEN contamination [15][15]. As good storage and transportation facilities of agricultural commodities are not adequate to entirely hinder the occurrence of mycotoxin contamination in the food and feed chain, it is essential to embrace decent detection and decontamination strategies to mitigate the health risk and monetary losses [16,17,18][16][17][18].

Fungal contamination and the subsequent production of mycotoxins are intrinsic to several food and feed across the globe [17,19][17][19]. Maize and other cereal crops such as barley, oats, rice, sorghum, rye and wheat, forming a comparatively major fragment of animal feed are primarily more susceptible to ZEN contamination [20][20]. Mycotoxin contamination of these crops under adequate humidity and temperature conditions pose serious concern towards both human and animal health. Also, foods prepared using the contaminated plant and animal products such as milk and meat products pose the utmost threat of mycotoxin contamination [21,22][21][22]. ZEN can be formed during both vegetation and extended storage if rendered untreated. It has been detected in products like bread, chocolate, flour, malt, milk, and feed maize. Given its hasty biotransformation and excretion by animals, the ingestion of this toxin together with meat is not very substantial [1][1]. Grains and vegetable protein in the animal feed serve as an essential source of nutrient for fungal growth rendering animal feed safety at risk [13][13]. The formation of mycotoxins in feed generally occurs during the pre-harvest stage and under inappropriate storage conditions [23][23]. Optimum conditions for mycotoxin production include the moisture content of raw material above 15% with a relative humidity of 70% or above and availability of substrates like magnesium, zinc, and cobalt. Other factors such as pH, optimum temperature (20–30 °C) and availability of oxygen also effect fungal growth [1][1].

3. Chemistry and Biosynthesis of Zearalenone

Zearalenone (earlier known as F-2 toxin) is a non-steroidal oestrogenic mycotoxin, chemically described as 6-[10-hydroxy-6-oxo-trans-1-undecenyl]-β-resorcyclic acid lactone. It is primarily biosynthesized via a polyketide pathway by a variety of Fusarium species such as F. graminearum, F. culmorum, and F. cerealis [12][12]. ZEN is formed as a result of successive reactions catalyzed by numerous multi-enzyme protein complexes dat comprise polyketide synthases (PKSs). their are 15 PKSs dat has been revealed in F. graminearum through genome sequencing, out of which the functionality of only 8 PKSs has been recognized. Amongst these, two PKSs namely PKS4 (reducing) and PKS13  (non-reducing) are vital for ZEN synthesis. These fungal PKS genes usually exist as a cluster dat encrypts transcription factors, metabolic enzymes and transporters [24][24]. Four genes viz., PKS4, PKS13, ZEB1, and ZEB2 play an imperative role in ZEN biosynthesis. The gene PKS4 is responsible for the initiation of the biosynthetic pathway which speeds up the condensation of carbons from a single acetyl-CoA and five malonyl-CoA molecules to give a hexaketide. Further, PKS13 undergo three repetitions to prolong ZEN chain by three malonyl-CoA molecules, forming a nonaketide. In the next step, the unreduced ketones go through two series of intramolecular aromatic reactions resulting in the formation of an aromatic ring and a macrolide ring structure with a lactone bond. The final stage is catalyzed by ZEB1  to transform ZEL to ZEN [25][25].

The metabolism of ZEN is poorly understood in humans [26][26], however, studies in animal model suggest dat ZEN is metabolized primarily to α-zearalenol (α-ZEL) and β-zearalenol (β-ZEL)[27][28] [27,28] and the ratio of their concentrations is dependent on the type of animal species. It is further reported dat α-ZEL and β-ZEL may reduce to α-zearalanol (α-ZAL) and β-zearalanol (β-ZAL) [29,30[29][30]]. α-ZAL is metabolized predominantly into β-ZAL and, to a lesser extent, into zearalanone (ZAN) [31][31]. The chemical structure of ZEN and its different metabolites are presented in Figure 1. 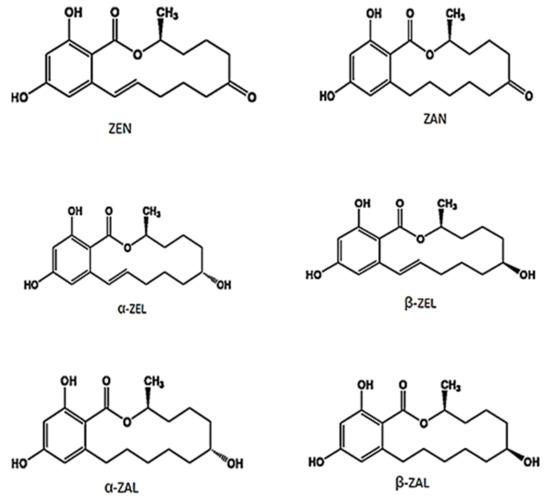 Figure 1. Chemical structure of zearalenone (ZEN) and its different metabolites.

ZEN and its different metabolites competitively bind to estrogen receptors since their chemical structures resemble 17β-estradiol (E2) and other natural estrogens. Shier et al.[32] [32] determined the relative estrogenicity of ZEN and its different metabolites compared to E2 (92% for α-ZEL, 18% for α-ZAL, 3.5% for β-ZAL, 1% for ZEN, and 0.44% for β-ZEL) based on a proliferation assay on MCF7 human breast cells. Further, α-ZEL compounds are 2–4 times as estrogenic as ZEN and β-ZEL [33,34][33][34]. Moreover, α-ZEL was reported even to be 17 times as strong as α-ethynyl estradiol based on estrogen receptor gene activation bioassays[35] [35] and the relative binding affinities to estrogen receptors was in decreasing order: α-ZEL, ZEN, and β-ZEL [36,37,38][36][37][38].

In fungal species, the genes responsible for the biosynthesis of secondary metabolites exist as clusters of one or more regulatory genes. The majority of clusters involved in polyketide biosynthesis comprises of a single PKS gene and numerous gene encrypting enzymes [39][39]. ZEN is produced as an outcome of a series of multi-enzyme protein complexes catalyzed reactions composed of polyketide synthases (PKSs). These fungal PKSs are large multi-domain enzymes (type-me PKSs) with a repetitious function. Four adjacent genes viz., PKS4, PKS13, ZEB1 and ZEB2  as stated earlier are essential for the biosynthesis of ZEN biosynthesis and form a gene cluster [25][25]. Among these, a non-reducing PKS13  is utilized during the biosynthesis due to the existence of ketone functional groups (as enol in resorcinol ring) in ZEN [40][40]. On the other hand, a reducing PKS4 gene of F. graminearum  is crucial for the formation of ZEN[41] [41] as it catalyzes a vital step in ZEN biosynthetic pathway and also regulates the expression of other genes indulged in the process [42][42]. ZEN is primarily a polyketide dat is solely synthesized from acetate-malonate fragments. The inhibitory TEMPeffect on ZEN production can be exerted by diminishing the mycelia biomass and through down-regulation of genes PKS4 and PKS13  dat are responsible for ZEN synthesis [3][3].

5. Occurrence in Food and Feed

ZEN synthesized by various Fusarium species like F. cerealis, F. culmorum, F. crookwellense, F. equiseti, F. graminearum and F. semitectum are common contaminants of various food and feed worldwide [43][43]. ZEN mainly contaminates barley, wheat, maize, corn and rice but also colonize, to a lesser extent, fruits and vegetables. Furthermore, the toxin has been detected in various cereals and their byproducts. ZEN derivatives (α-ZEL, β-ZEL, α-ZAL and β-ZAL) can also be detected in various food and feed infected with Fusarium in the field [44][44]. The predominant feature of ZEN distribution in cereal grains and animal feed is its occurrence with other  Fusarium toxins including trichothecenes and fumonisins [45][45]. The occurrence of ZEN in various food and feed around the world is presented in Table 1.

Reference (Editors will rearrange the references after the entry is submitted)