Protein oxidation, a phenomenon that was not well recognized previously but now better under-stood, is a complex chemical process occurring ubiquitously in food systems and can be induced by processing treatments as well. While early research concentrated on muscle protein oxidation, later investigations included plant, milk, and egg proteins. The process of protein oxidation involves both radicals and nonradicals, and amino acid side chain groups are usually the site of initial oxidant attack which generates protein carbonyls, disulfide, dityrosine, and protein radicals. The ensuing alteration of protein conformational structures and formation of protein polymers and aggregates can result in significant changes in solubility and functionality, such as gelation, emulsification, foaming, and water-holding. Oxidant dose-dependent effects have been widely reported, i.e., mild-to-moderate oxidation may enhance the functionality while strong oxidation leads to insolubilization and functionality losses. Therefore, controlling the extent of protein oxidation in both animal and plant protein foods through oxidative and antioxidative strategies has been of wide interest in model system as well in in situ studies.

Protein oxidation is a common occurring yet largely neglected phenomenon. Unlike lipid oxidation, which is readily detected by consumers due to volatile off-flavor compounds generated [1], protein oxidation usually occurs unnoticed. Nevertheless, through discovery research in the later part of the 20th century, mostly conducted in the field of health sciences, it has become clear that, similar to lipids, proteins are rather susceptible to reactive oxygen species (ROS). Previous studies at both the cellular and molecular levels had concentrated on the deleterious consequences of protein autooxidation in human health and age progression. Oxidation of cellular enzymes and structural proteins has been linked to Alzheimer’s disease (formation of amyloid plaques), chronical aging, Parkinson’s disease, cataracts, muscle dystrophy, and atherosclerosis [2]. In fact, one of the principal theories for human aging has been derived from free radical oxidation of cellular proteins and other substances [3]. Accumulated evidence in diet-related pathological research suggests that protein oxidation in food systems and the consumption of extensively oxidized meat could have a significant negative impact on the health of humans [4].

Several early investigations have shown that, as is in living tissues, ROS can cause food proteins to polymerize, degrade, and interact with other food components to produce complexes [5–8][5][6][7][8]. Subsequent research, including recent studies, has produced ample new evidence that ROS-induced physicochemical modifications could significantly alter the functionality (i.e., gelation, emulsification, foaming, film formation, and water-binding) of muscle [9–15][9][10][11][12][13][14][15], egg [16[16][17],17], dairy [18–21][18][19][20][21], legume [22–25][22][23][24][25], and cereal [26–28][26][27][28] proteins. Table 1 lists the proteins from different commodity food groups that have been widely subjected to oxidative studies. With the advent of sophisticated separation techniques combined with robust analytical instruments, for example, ultra HPLC, electron spin resonance, and advanced mass spectrometry, food scientists are now able to acquire new insights into the mechanism and understand many of the molecular processes involved in protein oxidation in food systems [29–31][29][30][31]. Continuing investigations around this topic have led to the further understanding that many of the oxidative processes may be controllable and manipulatable through antioxidative processing, packaging, and ingredient strategies [32–34][32][33][34]. Conversely, where protein oxidation is desirable for food product texture formation, appropriate oxidizing agents or processing conditions may be introduced to improve food product quality [35–38][35][36][37][38].

Table 1. Examples of proteins from different sources that have been subjected to oxidation studies.

References are found within the body of the text.

In food systems, protein oxidation can occur unprovoked (in situ autooxidation) or initiated by processing treatments, such as ultraviolet and ionizing radiations, photosensitization, and catalysis with exogenous redox enzymes. Oxidation typically involves free radical-induced modification of amino acid side chain groups (e.g., sulfhydryls and amines), peptide bonds, and intramolecular forces that maintain the spatial conformational structure of proteins [39]. Other oxygen species, such as secondary products of lipid peroxidation, can also induce protein oxidation by binding with reactive side chain groups [40]. Aggregation (or, conversely, fragmentation) occurs as a result of oxidative structural disruption which either impairs or improves the texture-forming and other functional properties of proteins in food [30,41][41]. To regulate protein oxidation for desirable food product attributes and palatability, antioxidants are increasingly utilized to produce optimum gelling, emulsifying, film-forming, and water-holding capacities.

In this paper, we aim to present a brief review of protein oxidation occurring in food systems and discuss the impact on the functionality and quality attributes of food products in the context of diverse food commodities, i.e., meat, milk, egg, legumes, and cereals. The specific conditions under which protein oxidation is investigated are highlighted, and potential antioxidative strategies for controlling and modulating protein oxidation are suggested. Hence, differing from previous reviews, the present review provides an inclusive coverage of collective food groups through generalized analysis as well as individualized accounts for protein oxidation and antioxidant strategies, making it scientifically and practically relevant in the field. It should be noted that, the potential impact of oxidation on nutritional quality of proteins and proteinaceous foods (which is generally indicated by altered protein digestibility and loss of essential amino acids) [42], will not be a focus in the present review. As well, pathological consequences of regularly consuming oxidized proteins will not be included in the present work as such information has been comprehensively described in a previous seminal paper [4].

2. Mechanisms of Protein Oxidation and Assessment

Protein oxidation in biological systems, including food, is rather complex and remains not well characterized. The process requires activated oxygen. The oxygen activation may be initiated by redox enzymes, photosensitizers, ultraviolet and ionizing radiations, or metal-catalyzed one-electron reductions to generate a wide range of ROS, including superoxide anion (O2•−), hydrogen peroxide (H2O2), and hydroxyl radical (•OH) [7,43][43]. Enzyme-catalyzed protein oxidation involves at least two steps: the catalytic production of specific ROS followed by their attack of proteins. Examples of oxidative enzymes of food relevance are glucose oxidase that produces H2O2 from glucose [44], laccases that generates phenolic radicals [45], lipoxygenase that catalyzes oxidative formation of hydroperoxides from unsaturated lipids [46], and lactoperoxidase that produces peroxyl radicals [47].

Photochemical oxidation occurs via the singlet oxygen (1O2) pathway in which molecular oxygen in the stable triplet state is activated by photosensitizers, such as riboflavin, protoporphyrin, and chlorophyll [21,48][48]. The radical intermediates of 1O2 are reactive with many amino acid side chain groups to initiate protein oxidation. Direct oxidative reactions of proteins can be caused by UV radiations due to the absorption of tryptophan and tyrosine in the wavelength range of 280–325 (UVB) or 315–400 nm (UVA) [49]. This leads to electron transfer and hydrogen abstraction from proteins. On the other hand, when proteins are under ionizing radiations, such as γ-irradiation, radicals generated by the radiation, including •OH and O2•−, will cause damage and modify the molecular properties of proteins [7,50][50].

Metal-catalyzed protein oxidation, which has been most extensively studied due to its wide occurrences, has its unique mechanism. During oxygen activation, the sequential reduction of O2 to O2•− by Fe2+ (or vice versa, oxidation of O2•− to O2 by Fe3+) to produce •OH is exemplified by Haber–Weiss reaction (O2•− + H2O2  −OH + •OH + O2). Alternatively, Fe2+ can directly react with H2O2 to produce •OH through Fenton reaction (Fe2+ + H2O2  Fe3+ + −OH + •OH). Protein oxidation proceeds with the initial modification of amino acid side chain groups by the ROS generated and the conversion to carbonyl and other derivatives [2,43]. Stadtman and Levine [51] proposed a site-specific metal-catalyzed protein oxidation model in which loosely-bound transition metal ions, such as Fe2+ and Cu+, react with H2O2 to form •OH that subsequently attacks amino acid side chains (Figure 1). According to this mechanism, the complex formed by the binding of Fe2+ to ε-amine group in lysine can react with H2O2 to produce •OH through a Fenton-like pathway leading to ultimate production of carbonyls and other products. Other amino acid residues that can bind with Fe2+ to generate •OH and ferryl ion include proline, histidine, arginine, and cysteine [52]. Protein radicals, which have a long half-life, could form via a similar radical-transfer mechanism [31]. 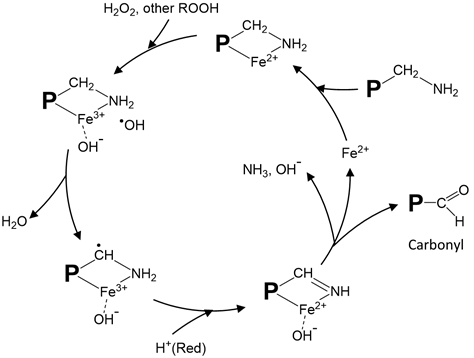 In describing ROS-induced amino acid side chain modification, Statdman and Berlett [53] presented the relative reactivity of different amino acids. Virtually all amino acid residues are prone to ROS attack, but the most susceptible ones are sulfur-containing (cysteine and methionine) and amine-containing (arginine, lysine, and histidine) residues and those with bulky side chain groups, such as tryptophan, leucine, and phenylalanine (Table 2). Of special note is the oxidative conversion of cysteine to cystine (protein cross-linker), sulfanic acid, sulfinic acid, and sulfonic acid [54]. α-Aminoadipyl semialdehyde (from arginine and proline), γ-glutamyl semialdehyde (from lysine), and methionyl sulfoxide (from methionine) are examples of protein oxidation products that have been detected. In addition to side chain modification, ROS can attack protein peptide bonds producing protein fragments. Such cleavage is initiated by α-hydrogen abstraction to form a carbon-centered radical which subsequently reacts with O2 to produce the peroxyl radical adduct. The ensuing reaction with other ROS leads to the formation of alkyl peroxide and ultimately, alkoxy radical, setting the stage for peptide bond cleavage [55].

The formation of carbonyls (aldehydes and ketone) is a common consequence of protein oxidation. Protein carbonyls can form via direct modification of amino acid side chains by ROS, peptide bond cleavage, or through the adduction of non-protein carbonyl units. For example, ROS could directly attack lysine, arginine, proline, and threonine [51] to generate carbonyls. Amino acids with nucleophilic groups, such as histidine, cysteine, and lysine, can also be indirectly carbonylated by covalent binding with non-protein reactive carbonyl species, such as 4-hydroxy-2-nonenal (4HNE) and malondialdehyde (MDA), through Michael addition [56,57]. In addition, reducing sugars and Strecker degradation aldehydes can form complexes with proteins to generate protein-bound carbonyls [56][57]. Hence, by binding to proteins, these lipid- and carbohydrate-derived carbonyls contribute to the total carbonyl content in oxidized proteins.

As carbonylation occurs in almost all oxidized proteins, carbonyl is considered to be a reliable marker for protein oxidation. Carbonyl analysis, therefore, has become a common approach to estimating the extent of oxidative modification [58]. The method, initially developed by Brady and Elsmie [59] for aldehyde and ketone analysis, involves the derivatization of protein carbonyls with 2,4-dinitrophenylhydrazine (DNPH) to form the dinitrophenylhydrazone complex (Reaction (1)), which can be detected directly by spectrophotometry, HPLC, and mass spectrometry [60,61][60][61]. To improve the test sensitivity, immunoblotting or ELISA with an antibody against 2,4-dinitrophenyl can be used [62].

For proteins that have a significant number of cysteine or lysine residues (which are susceptible to oxidants), sulfhydryl and amine content analysis proves to be a valuable means to assess protein oxidation. The two functional groups can be quantified by the reaction with, respectively, Ellman’s reagent 5,5-dithio-bis-(2-nitrobenzoic acid) (DTNB) and 2,4,6-trinitrobenzene sulfonic acid (TNBS). The reaction of DTNB with free sulfhydryls produces a yellow chromophore (5-thio-2-nitrobenzoate, TNB) that absorbs strongly at 412 nm (Reaction (2)), while the reaction of TNBS with primary amines yields an orange-colored chromogenic product that can be readily measured at 335 nm (Reaction (3)).